On my recent walk I passed through the village of Bartlow and I mentioned that the church held three secrets and behind the church lay three wonders. I promised I'd tell you about them and indeed I shall. Right now. 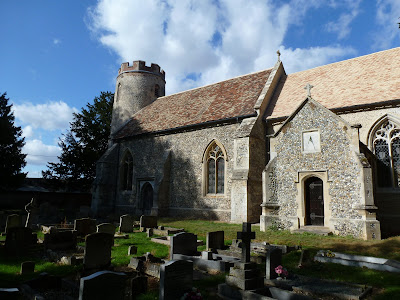 The church is unassuming enough, at first glance much like many another village church. A smallish flint built church surrounded by its churchyard. The round tower, which dates from Norman times, is unusual in this part of the world, but wouldn't get a second look from most passers-by. 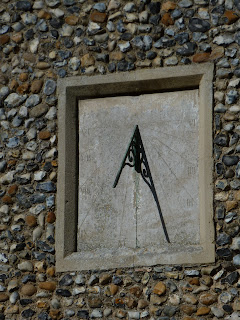 There's a nice sundial around the back too. But you'll have to venture inside to see the secrets of this 13th century building. 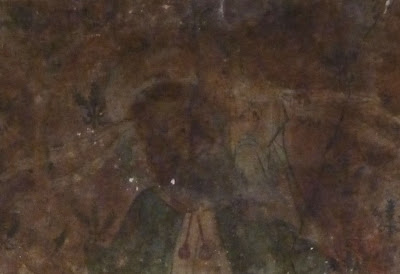 For inside there are wall-paintings around six hundred years old. The one shown above, which is part of what was once a much larger work, shows St Christopher. I hope you can make it out - I couldn't see it at all, but took the photo anyway and now I can see it clearly. St Christopher was often depicted in churches and invariably occupied the wall opposite the entrance. The very good reason for this was so that travellers could enter the porch and offer up a prayer to the saint without disturbing the service which might be taking place inside. 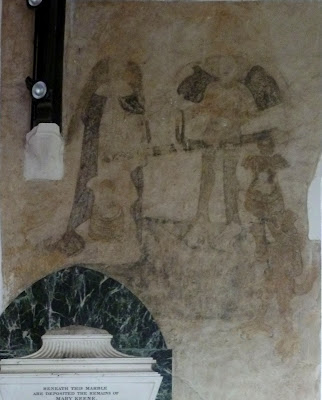 Here St Michael is seen weighing the souls. The devil is trying to tip the scales in his favour but is thwarted by Our Lady using her influence on behalf of the sinner to be judged, according to a leaflet I picked up in the church. 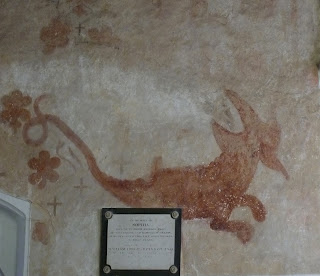 Lastly a picture of St George and the dragon, though sadly only the dragon remains.

Outside the church again and look for the little wooden signpost:

Here, reached by a rough, narrow path, with no more publicity than the rustic sign above, stand some burial mounds dating from around 100 AD. Not just any old burial mounds but the highest one in Britain, which is part of what was the largest group of such mounds to be found anywhere in Europe. 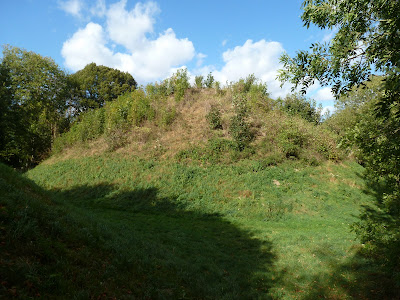 The largest mound is some 13 metres high. It can be ascended by a flight of wooden steps (to prevent erosion). Each step are about as high as in an average house staircase, which makes it about five stories high. 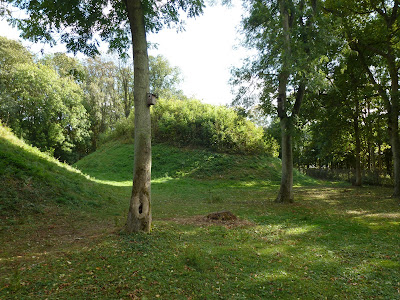 Originally there were seven "hills" but four were more or less flattened in order to build a railway through the site. That seems to be fairly typical of the fate of this largely ignored site. In 1815 one Busick Harwood had the site excavated to provide work for the unemployed but the finds were never properly preserved or recorded. In 1832 rather better investigations were carried out and cremated remains and a great deal of ornate and valuable "grave-goods" were found. But again much of the material has since disappeared. Even in recent times  the hills haven't fared much better; they've been at different times in the care of both Essex and Cambridge-shire local authorities and have until recently been badly neglected. 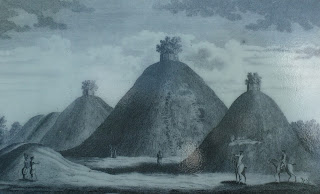 This picture in an old guide book, even allowing for some artistic license, shows what has been lost. 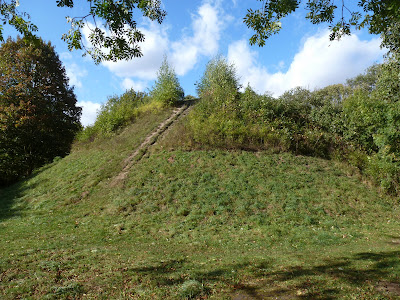 Take care.
Posted by John "By Stargoose And Hanglands" at 22:53