As I wrote in my last post about the Fellows' Garden at Trinity College, there were other impressive flower beds to be seen throughout the site. The colourful display below could be seen alongside the path which leads from Queens Road to Trinity Bridge and on to the college itself. And it could all be seen for free by anyone caring to wander that way. You will notice that things can get rather crowded down by the river on fine days. There's not much else to be said - just let three simple colours talk for themselves.... 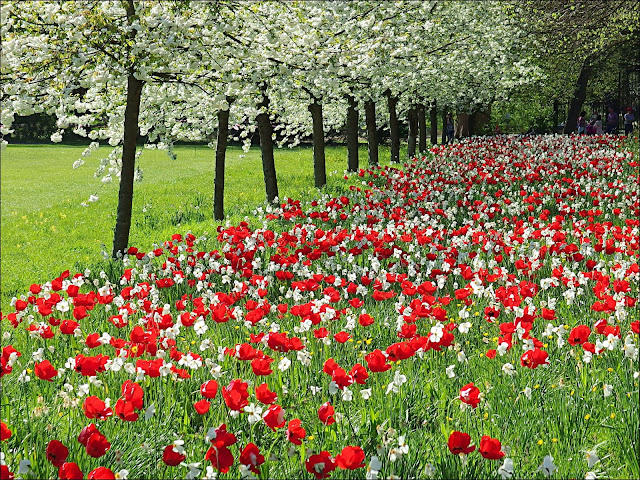 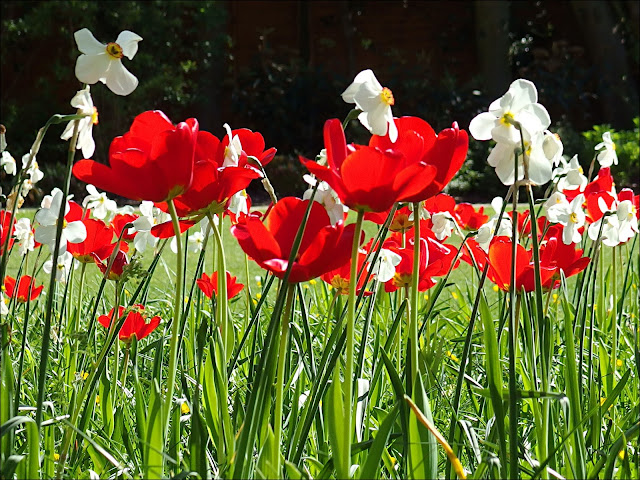 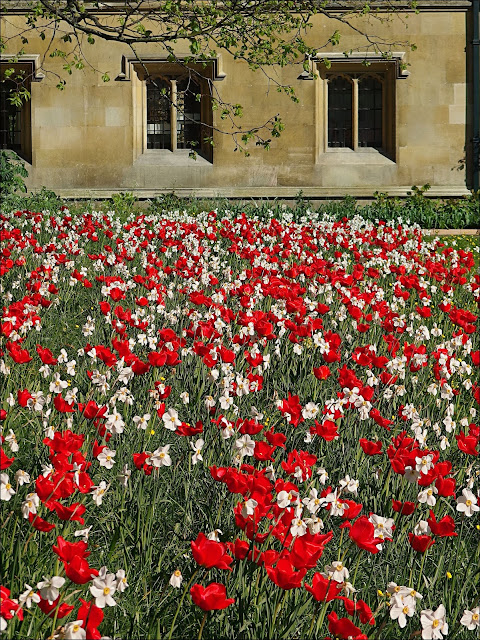 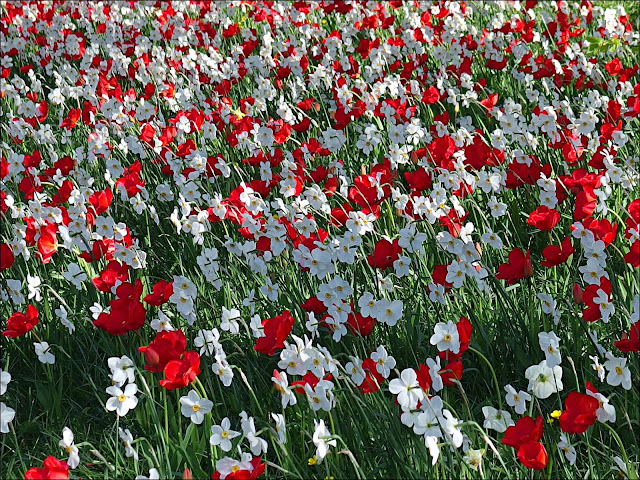 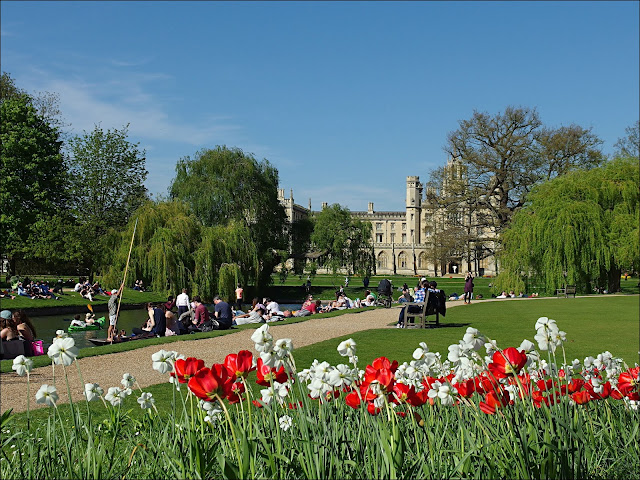 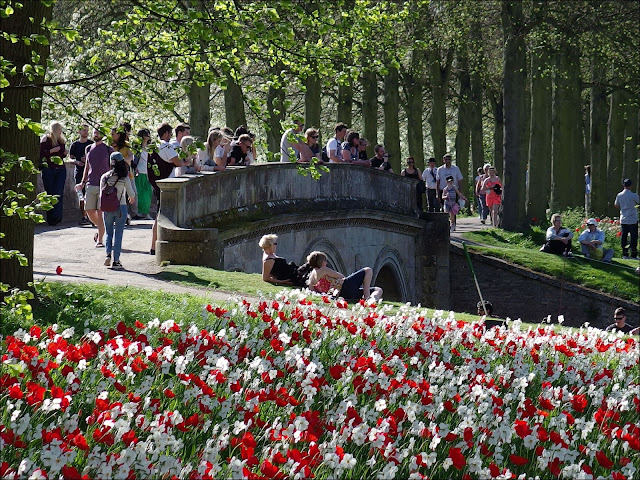 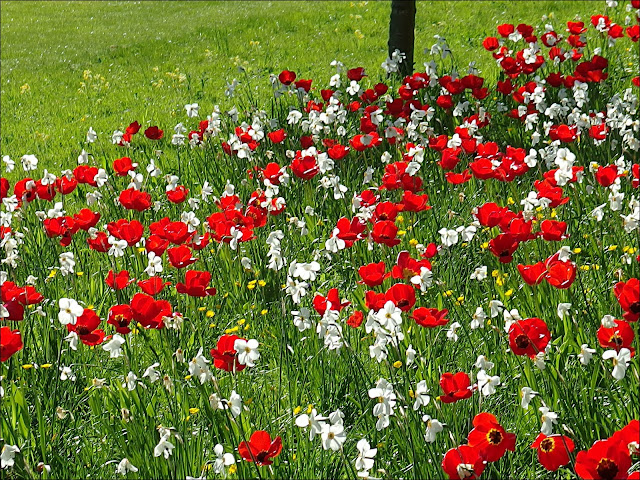 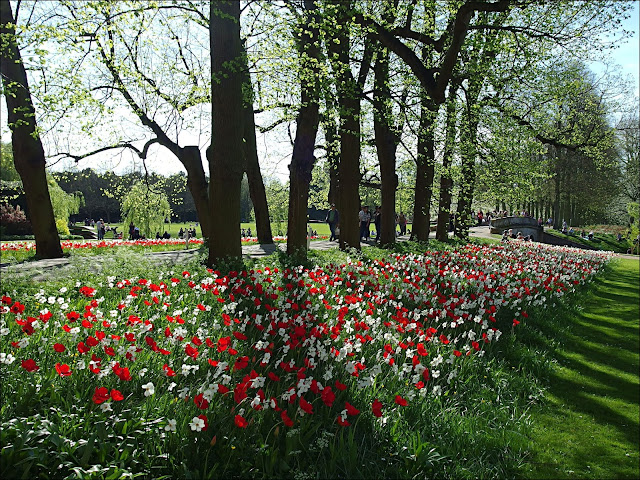 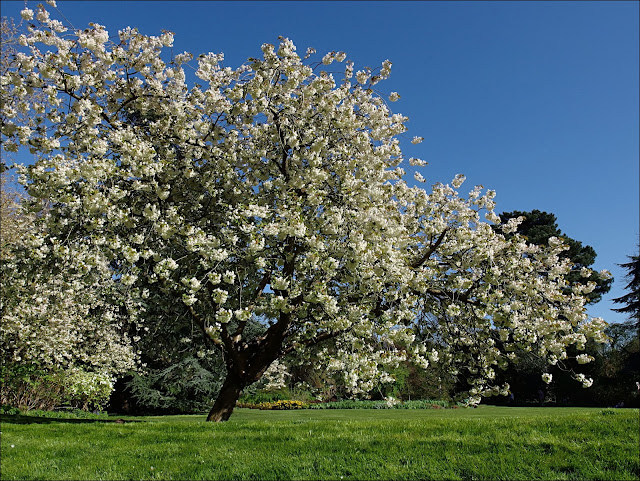 Cambridge is a city of parks, gardens and green spaces, many of which are open to the public for most, if not all, of the year. But not this one. The Fellows' Garden at Trinity College is only accessible to uneducated peasants like me occasionally; like on Sunday when for a small charge (which goes to charity anyway) I could wander unimpeded through this little bit of paradise. 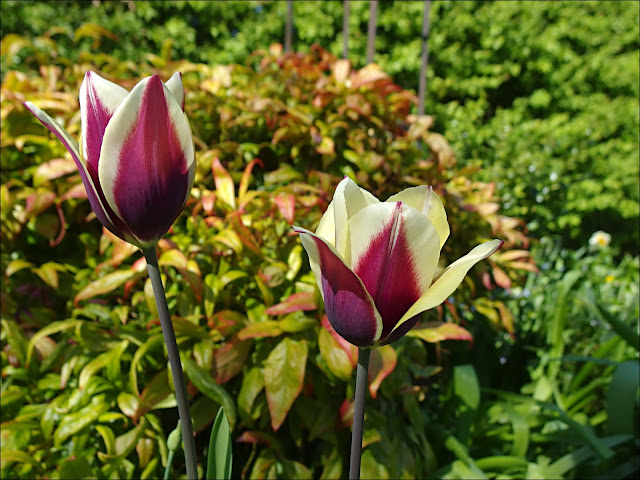 Perhaps I ought to explain who these Fellows are. They are the senior members of the college who, under the leadership of the Master of the College, run the whole caboodle. They also include some long-serving retired professors - presumably no one wants the job of telling them that their services are no longer required. Along with their many responsibilities come certain privileges: the honour of dining at the top table in the college hall,  a room within the college and the right to wander about in the Fellows' Garden (though nowadays access to the garden is extended to others at Trinity). 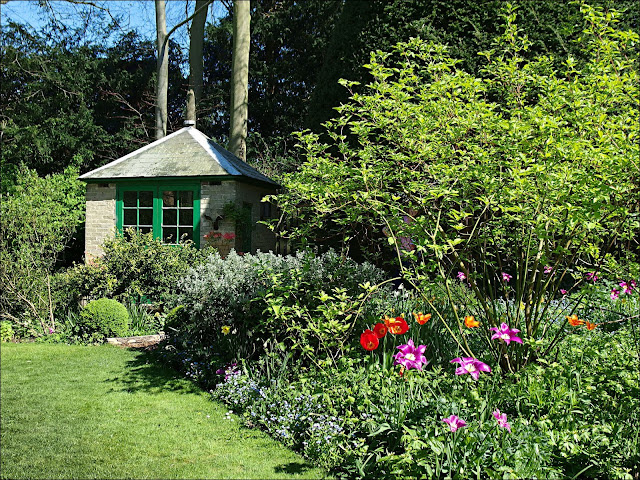 In 1871 Trinity bought this plot of land, which had previously been an old arable field, from the University and had a garden laid out by William Brodick Thomas, who also worked on Sandringham House and Buckingham Palace. From then on the development of the garden has been in the hands of the many great men (and recently great women too) who, besides their academic studies, had an interest in gardening. 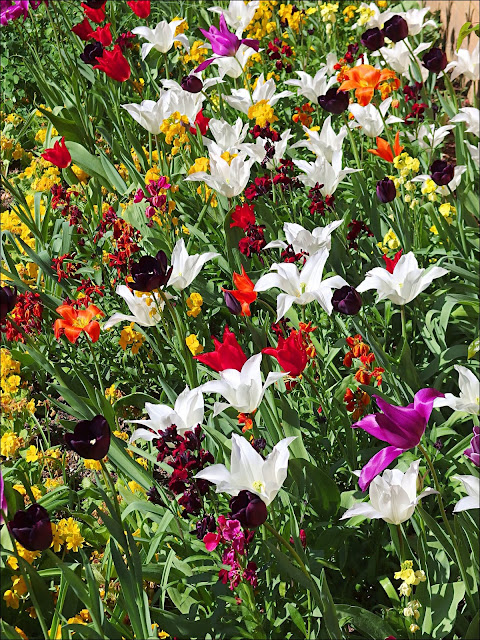 The philosopher, Ludwig Wittgenstein, found time to write a twelve-page letter of advice about the gardens which included his belief that "tulips of all contradicting colours...look gaudy and vulgar". He wouldn't have cared for the bed photographed above! 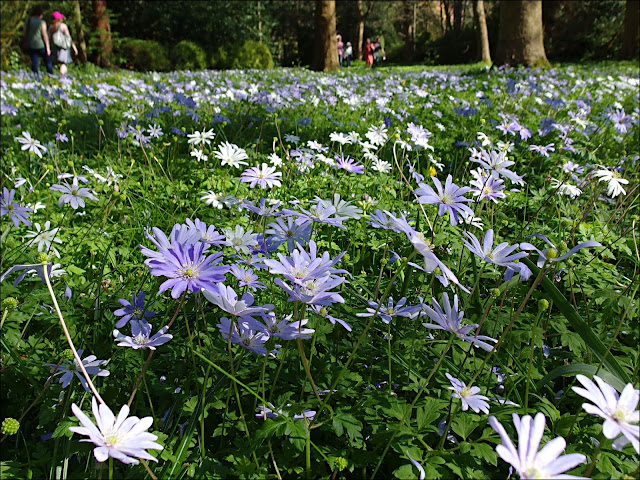 Wittgenstein also troubled his enormous intellect with the course of the paths which the gardener cut through the wildflower meadow. He did not merely criticise however but laid out what he thought was a more pleasing scheme, which is followed by the paths to this day. 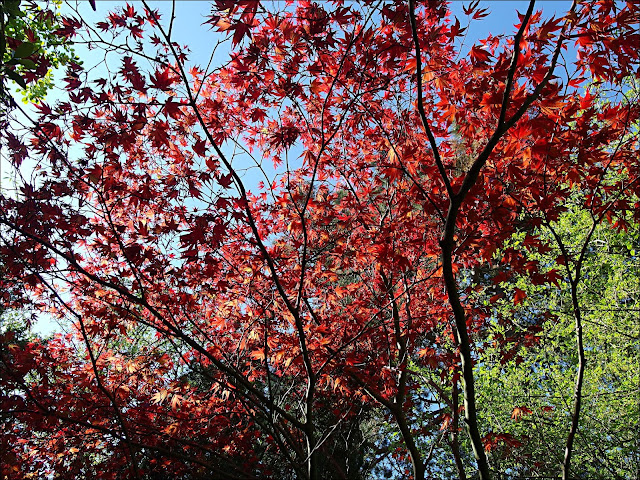 A E Housman, who is best remembered as a poet, also took a great interest in the garden when he was not writing authoritative works on Latin texts. 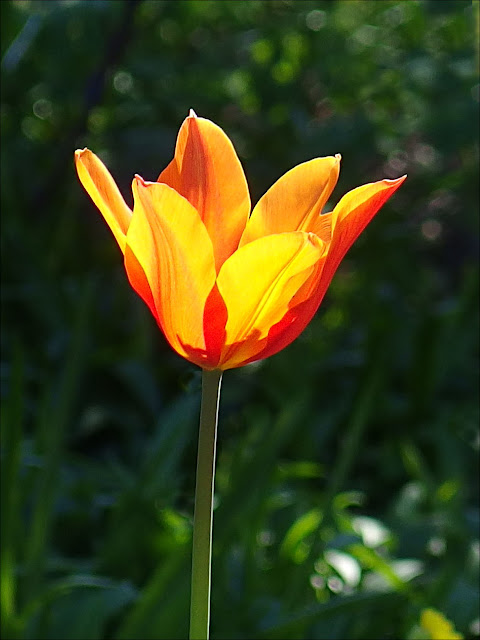 Others were more like F J Simpson, who started off as one of the leading scholars of his day but, having done enough to get himself installed in this great seat of learning, spent the rest of his life wandering around the gardens pruning the roses. 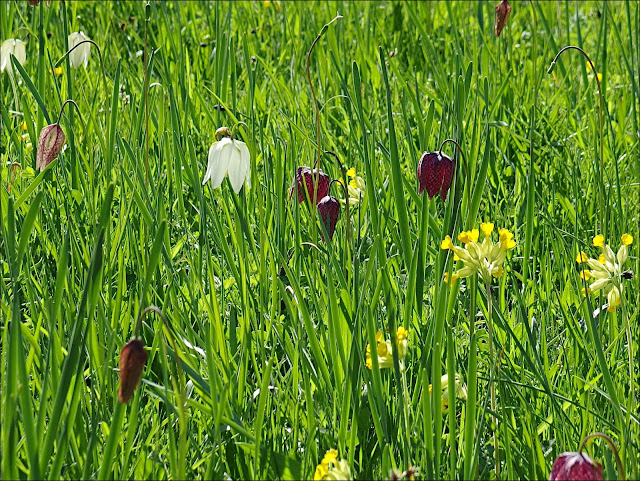 The garden has a path running around its periphery which gives the area its informal name of The Roundabout and was designed for these great men to engage in thoughtful perambulation while refining their ideas and theories. One can't help but wonder how many world-changing inventions and insights were formulated beneath these leafy boughs. 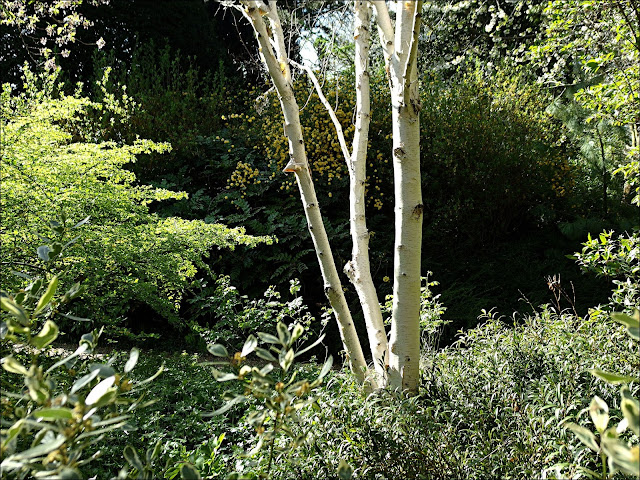 At about this stage of the afternoon my own mind was formulating a vision of tea and cakes. Fortunately my needs had been foreseen by the local Girl Guide unit who were on hand to administer the required sustenance at very reasonable prices. 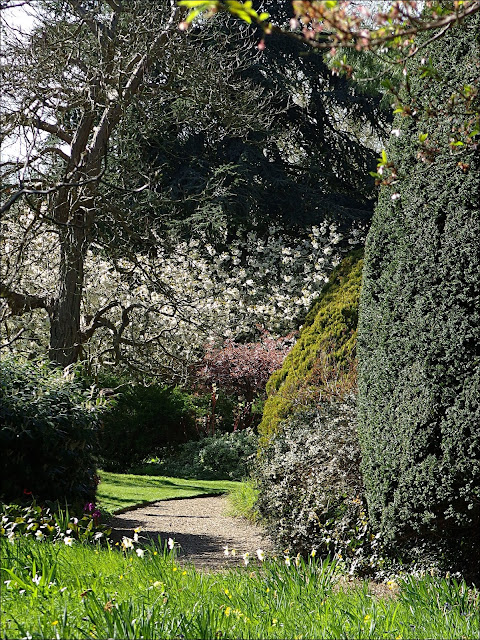 The gardens seem to be open at around this time every year as part of the National Garden Scheme. Details are published online on the NGS site, which also gives details of all other gardens open under the scheme throughout the year - a useful resource for anyone with an interest in gardens. You may need to know that the Fellows' Garden is on the opposite side of Queens' Road to the College. Though there are some remarkable plantings there too. I'll show you some in my next post. 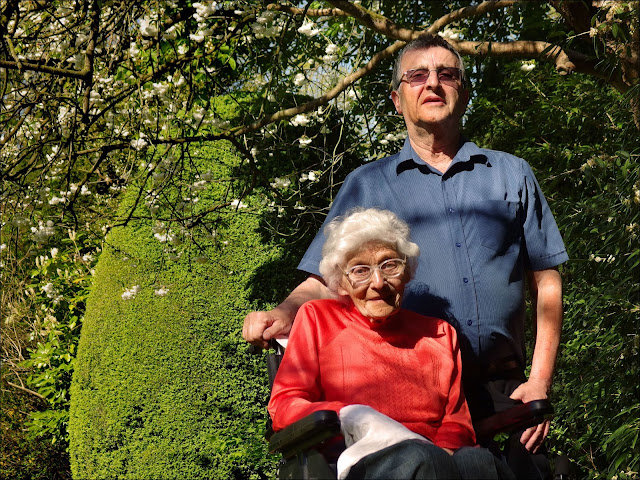 My brother and my mother complained that I only showed their back view when we went to Thriplow to look at the daffodils recently. So here they are in glorious full-frontal view - my mum Flo and my brother Les. 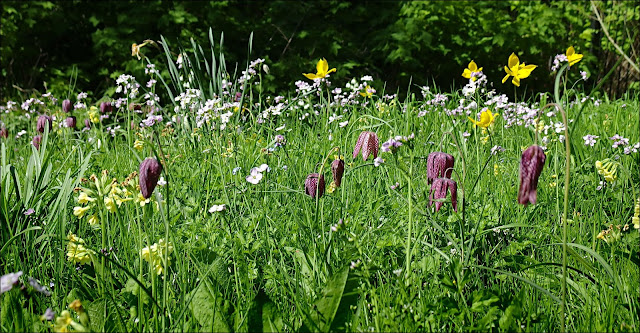