As I was out walking this morning I came across a field being ploughed. Nothing remarkable in that but it set off a train of thought - if such disconnected items can be called a train - which I'd like to share with you. 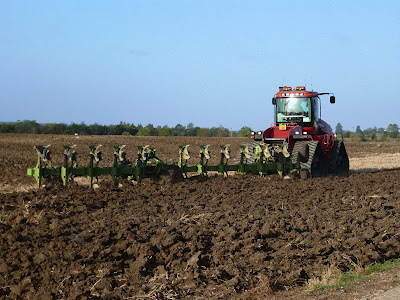 Old Bert who worked on the farm in my youth had a word for anything that was vaguely mechanical and that word was "tackle". If one of the men took out a new cigarette lighter when we'd finished eating our "dockey" Bert would say something like "Fancy bit o' tackle you got there". One day he looked up from his newspaper and exclaimed, "Well, that's a fair bit o' tackle, that is!". I looked over his shoulder, there was a picture of the maiden flight of Concorde! I could never see Concorde again without hearing his words! So even though Bert's been gone many a year I know what he'd have said if he'd seen the mighty equipment used for ploughing today.


It's all a long way from how ploughing used to take place. A cabless tractor pulling a couple of furrows, the driver wrapped up in donkey jacket and old sacks held in place with baler twine. And that, in turn, must have seemed like luxury to those who remembered ploughing with horses, walking behind with one foot in the furrow and one foot out. It's no wonder so many old men had such strange walks.

I once watched a man ploughing with a horse in the remote mountains of Montenegro. Some pasture land appeared to be being brought into cultivation for the first time. Every step or two he had to stop and remove stones from in front of the ploughshare. These were carefully laid on the ground he'd just ploughed, which made no sense to me at all. A week later all was revealed; the women were picking up the stones and throwing them aside into rough rows. I imagine they were then going to build the stones into drystone walls. I'd seen long, narrow fields elsewhere in the district and I suppose that's how they came about. You see fields like it in the north of England though landscape historians reckon they had a different origin - but they could be wrong, of course.

"With a piece in our pockets, to the fields we do go
For we're all jolly fellows that follows the plough."

I used the word "dockey" earlier. You probably worked out that it's lunch eaten in the fields or elsewhere on the farm. I'm told it derives its name from the fact that the farmer would "dock" money from the men's pay for this unproductive time. Whatever the origin of the word, lunch was always dockey. If out in the fields the wise farmhand would shelter from the wind by sitting a few yards away from the hedge, rather than up close to it. "There's not so much draught there", they'd explain. And they were right too. A hedge stops most of the wind but there are always little gaps where the wind whistles through. Sit close to hedge and you feel the draught, but sit a little further away and the air is calm and still.

A tale was sometimes told to illustrate the mean, penny-pinching ways of the farmer. A man working with cattle was tossed by the bull. Although he was shaken up and injured the man continued at work as he feared the farmer would dock his pay if he stopped to have his wounds seen to. At the end of the week he was dismayed to find that, despite his loyalty, money had been deducted from his wages. He went to see the farmer to explain what had happened. "Well," said the farmer, "you surely can't expect me to pay you for the time you was up in the air!"

Take care.
Posted by John "By Stargoose And Hanglands" at 18:14