Last night I was searching for some postage stamps; I know I've got some somewhere. In amongst the dried-up biros, broken nail-clippers, odd socks and used train tickets I found this little notebook with "The Open Road" written neatly on the cover. 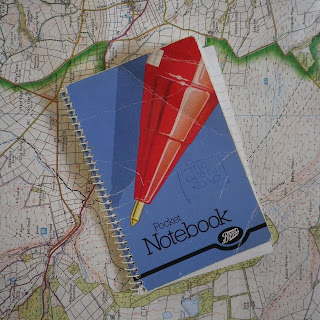 ﻿It's a booklet in which I collected quotes which caught my eye and my imagination in various books I'd read. It takes its title (if "title" is not too grand a word for the ballpoint scribble on the front cover) from the quote on the first page

Afoot and light-hearted I take to the open road
Healthy, free, the world before me,
The long brown path before me leading wherever I choose.
Walt Whitman

At the time I spent every holiday walking the footpaths and byways of Britain, sometimes with a friend but quite often alone. This little book nestled in a corner of my rucksack pocket and tended to get brought out at those inevitable low moments when the rain sheeted down or the promised pub turned out to be closed.


On a long walk there is within us a small lamp that now and again burns low.
Hillaire Belloc

There is a Tibetan saying that on a long walk obstacles such as rain, hail and snow are the work of demons intent on testing the integrity of travellers and eliminating the faint-hearted among them.
John Hillaby

It was good to know that others had experienced the frustrations and occasional boredom on long journeys afoot, as far too often accounts of walking in the countryside are depressingly uplifting and cheery. But it was good to be returned to those happy hours of striding out across the tops without a care in the world.

I love that - "random rivers so finely flowing"

During that period of my life I walked many of the official long-distance paths of Britain - The Pennine Way, The Coast To Coast Walk, The West Highland Way, The Pembrokeshire Coast and others. I also made up routes of my own and sometimes just wandered about aimlessly in places like The Lake District, climbing a mountain then sitting on the summit and deciding where to head next - off to an adjoining peak or down to the valley for food or a pint. This little notebook is similarly serendipitous.


Corruption has never been compulsory, when the cities lie at the monster's feet there are left the mountains.
Robinson Jeffers

The place you're at
Is your habitat
Everywhere else you're a foreigner.
Ogden Nash

Hey, babe, take a walk on the wild side
You-Know-Who!

We are most of us too busy, too worried, too intent on proving ourselves right, too obsessed with ideas, to stand and stare.
Bill Brandt (photographer)

There are pages more of this and I'm surprised how well I remember these words after so many years. Have you got any quotations which I should have included ?

Take care.
(never did find those stamps).
Posted by John "By Stargoose And Hanglands" at 09:15