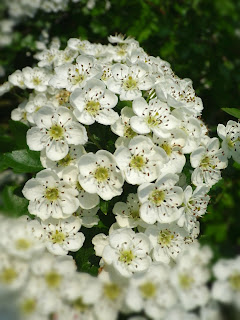 "When Spring comes on, the birds do sing,
The lambs do skip and bells do ring,
While we enjoy their glorious charm,
So noble and so gay."

Thus runs the traditional English folksong "The Spring Glee".  And this morning, May Day, many a Morris side was up to dance in the dawn. The custom nearly died out during the last century but bands of enthusiasts up and down the country now gather to "keep up the day" and dance the old dances. Ask why they dance and you're liable to get any answer from "...to respect an ancient pagan fertility rite..." to "..I'm only here for the beer".

In the old days it was traditional to have seeding-time finished by May and the men would be given the day off work, they then amused and entertained themselves in any way they could - dancing, singing, various races, eating and drinking - and gradually different areas developed their own local traditions.

"Come you young men, come along,
With your music dance and song,
Bring your lasses by the hand,
For 'tis that which love commands.
Then to the Maypole haste away,
For 'tis now a holiday"

Maypole dancing, cheese rolling, Jack-in-the-green, the Padstow 'Obby 'Oss all take place on or around May Day. More recently a modern May Day tradition has grown up where "bikers" ride down to the coast on the holiday weekend. The basic motivation seems to be the same - to shake off the winter blues and have some fun.

"It was in the pleasant month of May,
At the springtime of the year,
And down by yonder meadow
There runs a river clear" 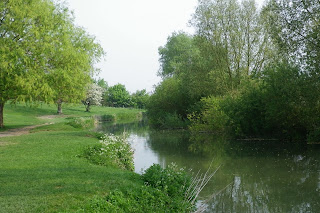 Though there are songs bemoaning the fate of the agricultural labourer they are few and far between. Most of the songs speak of contentment and joy which is perhaps surprising given the appalling conditions which agricultural workers endured. Surprising, that is, unless you've lived and worked among the descendants of these country people who have an almost Zen-like calm and stoicism about them "That's the way things is and bain't nothin' we can do to change 'em". It must have been their acceptance of the status quo that allowed the monarchy to survive as long as it has. Not that these men couldn't be stubborn and awkward when it suited them, (we did get rid of the king once remember, only to find that the alternative was just as unpalatable),but mostly they just bided their time and quietly tried to turn things to their advantage. But in the meantime they might as well have some fun and sing of the good times.

It always strikes me as ironic that May Day then has also become International Workers' Day.for while these sons of the soil would have concurred with the feelings of solidarity and brotherhood nothing could have been further from their minds than revolution.

"Unite and unite and let us all unite,
For summer is acome unto day,
And whither we are going we will all unite,
In the merry morning of May."

Take care.
Posted by John "By Stargoose And Hanglands" at 17:52