The observant among you may have noticed a list which has appeared in the side panel of this blog, calling itself "Nature Bookshelf". It's just a selection of some of the more interesting books I've read or re-read recently. 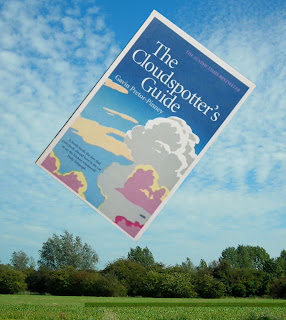 Sneaking in at the bottom of the list is "The Cloudspotter's Guide" by Gavin Pretor-Pinney. The reason it only snuck in in last place is not because it's inferior to the others; it's just that it doesn't quite fit the category. In fact it doesn't fit any category, it's a one-off, an original creation, a unique fluorescence.

On the face of it the author takes us on a guided tour of the different types of cloud, one chapter  for each. But this is no school textbook; there's poetry, philosophy, art appreciation, ornithology, flights of fancy, daydreams, odd anecdotes, even odder anecdotes....

He asks the question "Why does rain fall from up above?" and remembers that Frankie Lymon asked the same question in the song "Why Do Fools Fall In Love". He then conducts an imaginary explanation to Mr Lymon, as I'm sure nobody did at the time, and concludes that Frankie's decline into drug addiction and an early death might have been avoided if someone had only taken the time and trouble to explain some simple meteorology to the poor boy. It all makes perfect sense I assure you!

Even if you don't remember the science the book leaves you looking at clouds differently and appreciating their beauty. 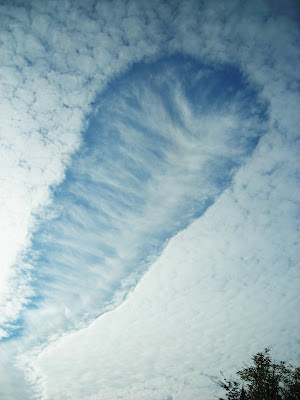 The picture above is a "fallstreak hole" and is apparently not that rare though they are usually circular rather than looking as though a submarine has just fallen through the clouds. 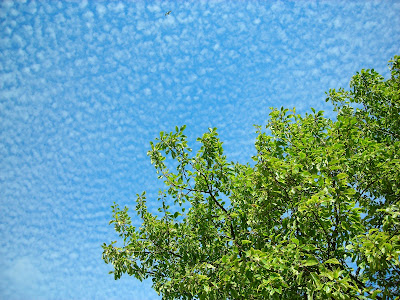 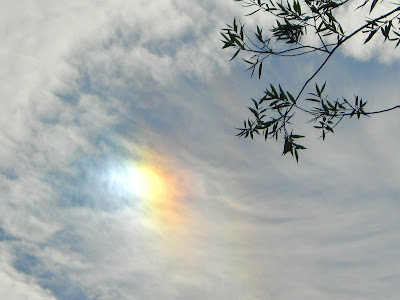 "Sundogs" caused by sunlight passing through ice-crystals in the upper atmosphere. 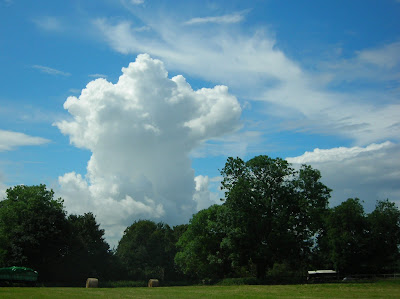 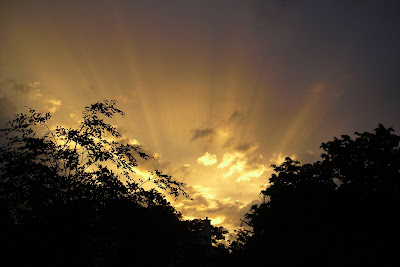 After an evening storm.
Take care.
Posted by John "By Stargoose And Hanglands" at 23:04