On Saturday morning a small group of people from the village gathered in the church car park to enjoy a bird walk in Melwood, our local nature reserve. Our leader was Mike Foley who volunteers for both the RSPB and the BTO . Mike began by telling us a bit about the British Trust For Ornithology - how and why it collects data on the changing bird populations in the British Isles. I must confess that although I've sent records in to the BTO there were aspects of their work which I hadn't appreciated.

Just standing there on the roadside it was amazing how many birds we could hear singing. In fact it was difficult trying to separate the different songs as they all seemed to blend together after a while. We set off along the footpath to Topcliffe Mill, which is often a good place to see Grey Wagtails, though this morning we were out of luck. We passed through the stile and into the meadow; Swallows were skimming low and Pied Wagtails were hopping about in search of insects. 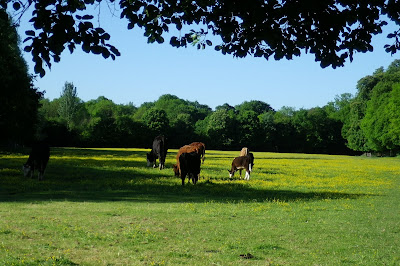 Standing in the wooded area alongside the little River Mel we could pick out the songs of Blackcap and Song Thrush. A little later one of the group managed to spot a Buzzard on a very distant fencepost. We wandered on looking and listening but also engaging in occasional quiet conversation. We thought we could hear the sound of nestlings calling from one of the many bird boxes but as soon as we stopped to listen of course everything fell silent. 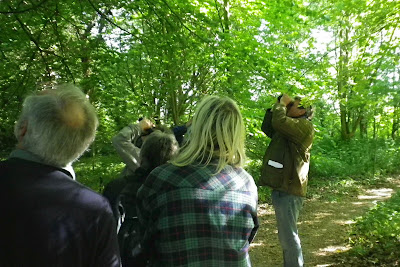 Just as we were about to end our walk an angry squawk came ringing through the trees, such an indignant cry could only come from a Jay. We raised binoculars and could see the bird in question hopping about madly in the foliage. Eventually we could make out the cause of the Jay's cursing and swearing; there in the branches was a Tawny Owl roosting and seemingly quite unperturbed by the racket. He opened one eye lazily to survey the scene. Whether on account of one angry bird or a dozen inquisitive humans the owl decided to change its position. This only encouraged the Jay to further irate expletives. The owl however was now comfortable and refused to budge; the Jay flew off in disgust. It's unusual to get such a good sighting of a Tawny Owl in daylight. An excellent end to our stroll.

Take care.
Posted by John "By Stargoose And Hanglands" at 22:08