Just like a General Election then, except that we are deprived of the usual choice c), and sometimes d), e), f) and g), namely someone we don't really think will win anyway. 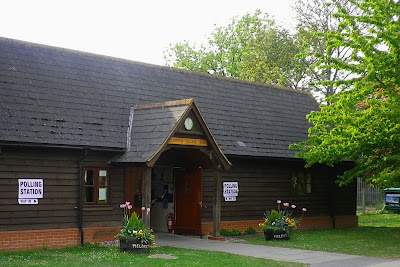 The hub of democracy - aka the village hall
Apparently the main argument for "first past the post" is that we've always done things that way and look what fine fellows have been running the country up to now. The argument against it is much the same.
The main reason for voting for AV is that we'd really like Proportional Representation but we ain't gonna get it, no way. While the main argument against AV is that they use a similar system in Australia and end up being led by chaps called Kevin. Now that is one risk you're never going to have if we stick with the monarchy.
No one can tell me what difference, if any, a change will make to the outcome of an election, but I suspect from the lack of real urgency from any of the parties that it won't change things very much.
Anyway I made my cross with the pencil provided and had a nice chat outside in the sunshine with some of my neighbours who were also exercising their democratic right. So my time wasn't wasted.
Take care.

Posted by John "By Stargoose And Hanglands" at 19:11