More Wonders Of The Roadside

Since my recent post about the curiosities to be found on the roadsides and verges of rural Cambridgeshire I've been on the lookout for similar items. Here are some things I've spotted recently. 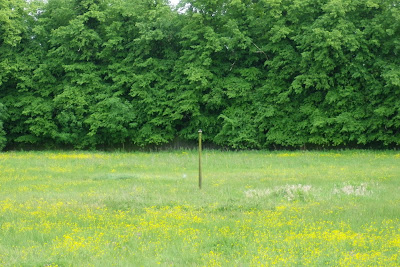 At the end of Grantchester Meadows, just before the footpath/cycleway enters the suburbs of Cambridge, is this lovely flowery meadow. It is preserved as an example of a traditional watermeadow and has some attractive flora. Right in the centre of the field stands what looks like a lamppost. And a lamppost is exactly what it is. "What's it doing there, pray tell us, Mr Blogger". Well, in the nineteen-twenties and -thirties this meadow was flooded during the winter months just as it always had been, but not just to encourage an early growth of grass as was the traditional purpose of such watermeadows. During the harshest months of winter there was ice-skating to be had on the payment of 6d for an evenings skating. The lamp was erected to light this improvised ice-rink. The old toll-booth where the money was collected is still standing too. 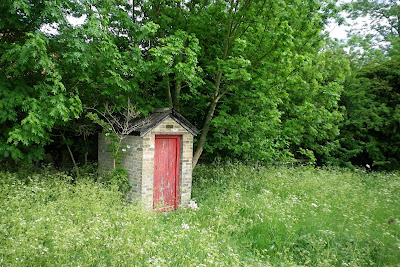 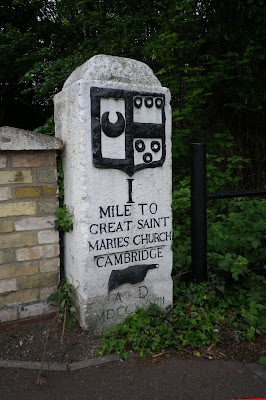 This stone was put in its present position in 1729, that is shortly after the adoption of the standard mile of 1760 yards. Before that the length of a mile varied from one place to another and was often a matter of guesswork. This gave rise to the story of an English traveller in Ireland complaining, "The miles are very long in this part of the country", to which a local replied "Ah, they may be long, sir, but they're also narrow!" 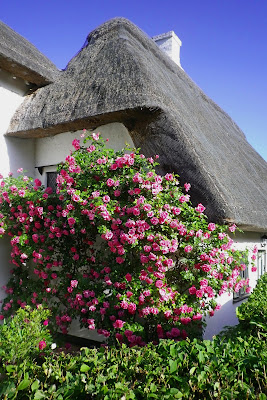 I pass this cottage on my way to work each morning. This morning being Sunday there was no one about so I climbed up onto the low garden wall, peered over the hedge and took this photo. Very twee, I know, but still very pretty. 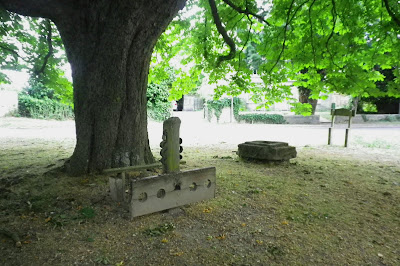 I also pass these every morning. They date from the days when each parish was responsible for handing out their own punishments to hooligans and ne'er-do-wells. They were last used in 1860 as a punishment for brawling in church. Behind them is the base of a former prayer-cross, where services were held prior to the building of churches.

Posted by John "By Stargoose And Hanglands" at 22:46