The Church At Over

To understand the title of this post you need to know that there's a village in Cambridgeshire that goes by the unlikely name of Over, and that it has a very impressive church. 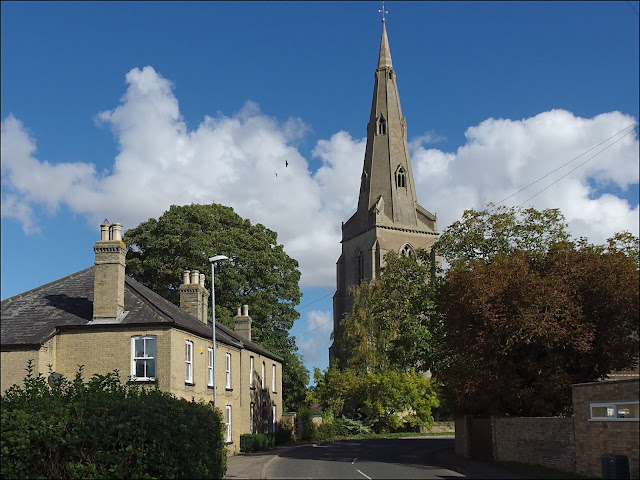 The village is poised on the very edge of the Fens, which was formerly a marshy area which was impassable to anyone but those with local knowledge in summer, and only navigable by boat in the winter months. There were small islands within the fen which were habitable and on the larger ones religious houses were founded in the early days of Christianity. 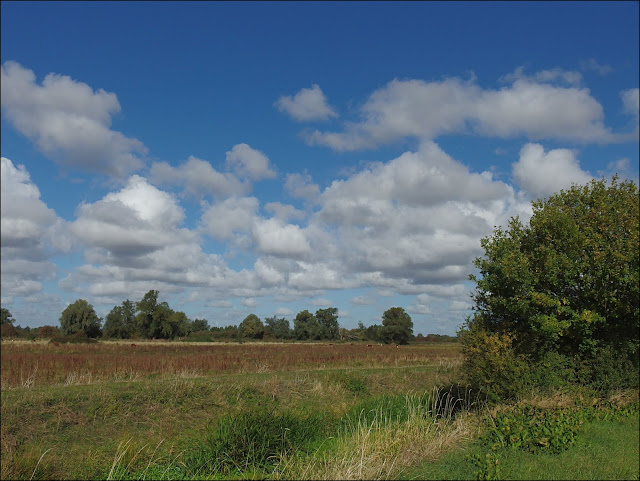 The isolation of these places must have had some appeal to these religious men and it also gave them a degree of protection from invading heathen armies - though not safety enough in many cases. Four great abbeys survived - at Ely, Ramsey, Thorney and Crowland - and during the medieval period they had enormous wealth and power, the monarch's forces having little control in this impenetrable watery landscape. 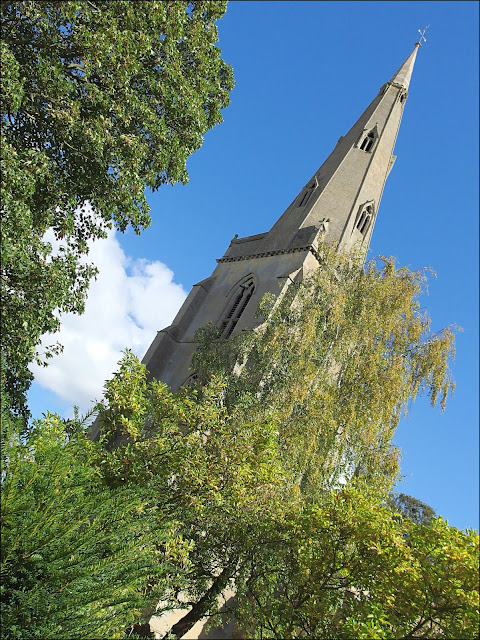 Around the edges  and on some of the islands within the fen there stand a number of magnificent churches. There are a number of reasons for this:

Stone spires like the one at Over are rare in the rest of Cambridgeshire because the county has no appropriate stone for their construction. However an excellent building stone is quarried at Barnack, near Peterborough, which could be brought by boat to these fen edge villages.

Transporting stone and building huge churches was still an expensive business and, hard as it may be to imagine now, these villages were once wealthy places. When the fens were flooded and boats were small these places functioned as ports for much of East Anglia, which was wealthy too, through grain and wool production. The fens were also a great place for fishing and wildfowling which allowed the population to support itself even if the harvest failed.

Furthermore these parishes benefited from the patronage of the abbeys; in the case of Over from close ties with Ramsey. 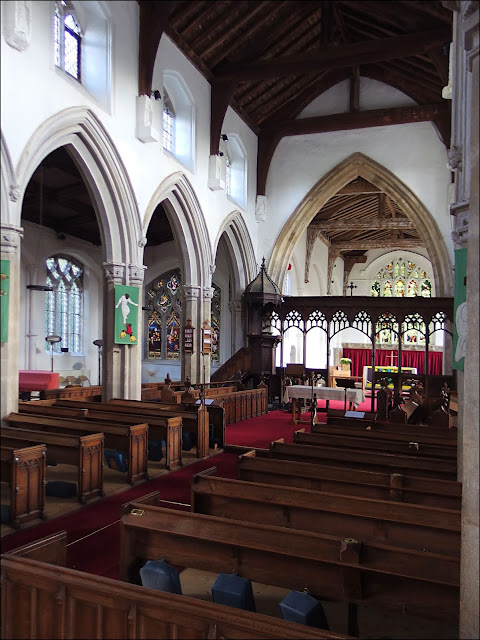 And so you open the heavy door and find yourself in a large, well-kept church which once again proves that should you desire to make a church appear both grand and welcoming you could do a lot worse than invest in some red carpets and curtains! 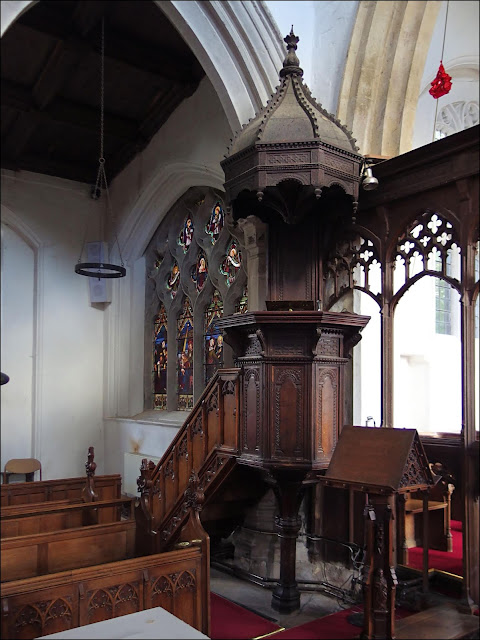 The first thing to catch my eye was the pulpit which is Jacobean (early 17th century). Pulpits always look a bit strange to my eye but there is some science involved in their design: they are constructed to act as a soundboard so that the preacher's voice is naturally amplified so that all can hear. 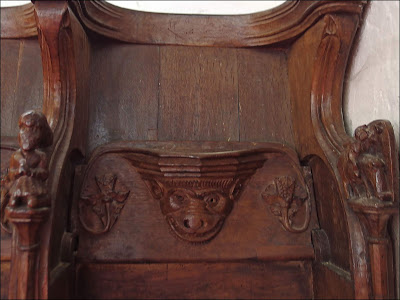 The choir stalls are fitted with "misericords" which, you may remember from earlier posts, are small carved ledges fitted to  the tip-up seats. An ageing monk could perch his bottom thereupon to get a little rest from standing during long sermons. These seats are thought to have come from Ramsey Abbey when that establishment was closed down by Henry VIII. 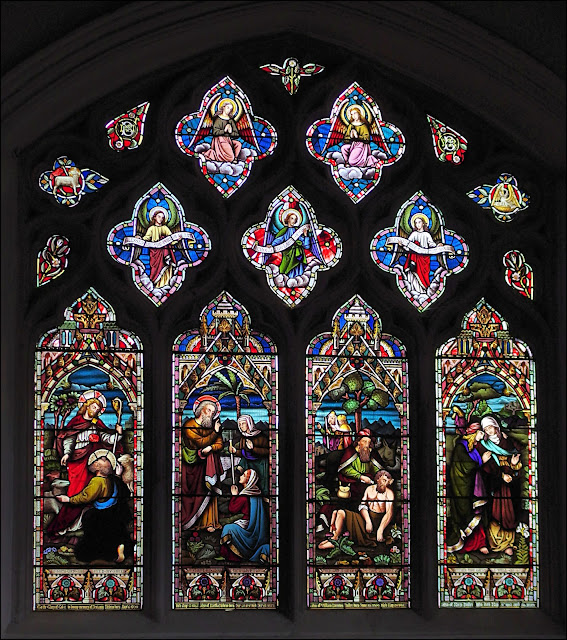 I can't tell you much about the stained glass, except that it's probably of no great age. However its always satisfying when such photos come out well, so I couldn't resist including it here. 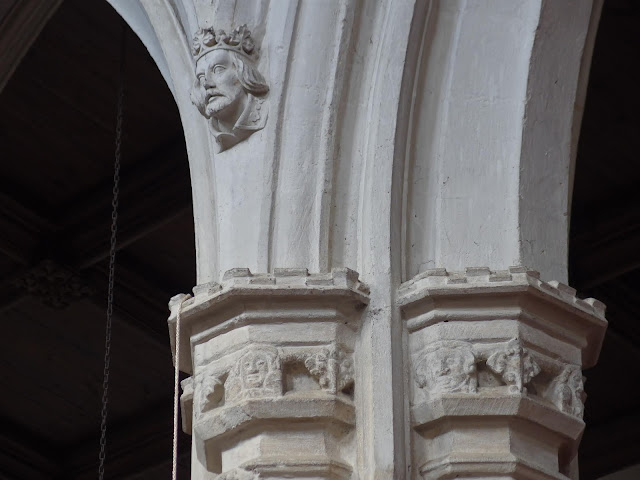 As you look around you realise that there are carved faces everywhere - you are being watched! There are lots more details - a nice font, a medieval rood screen, boards telling of the feats of the bell-ringers, a marble slab recording the deaths of a married couple within a few days of each other in 1676.... 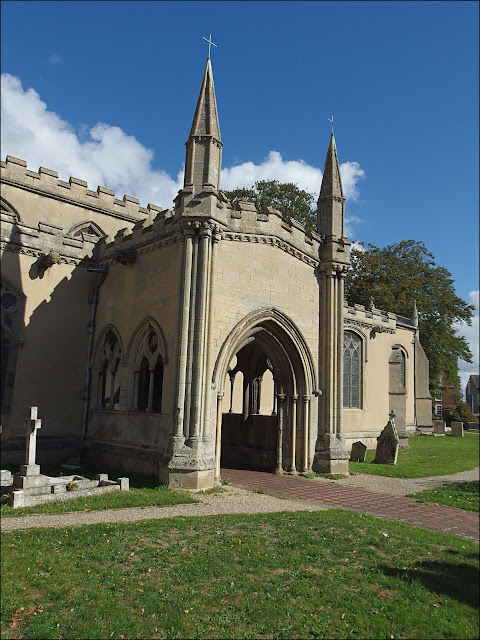 Outside, through the porch (which everyone says is perfectly proportioned, but looks a bit top-heavy to my eye) I realised I was still being watched.... 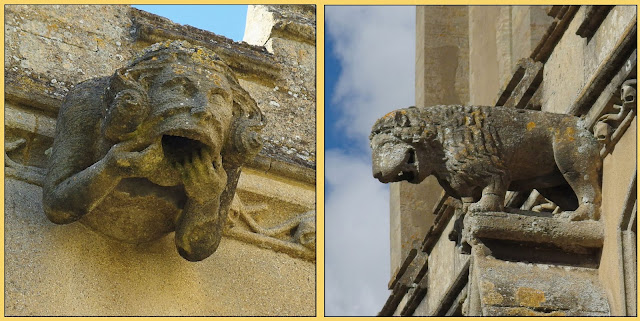 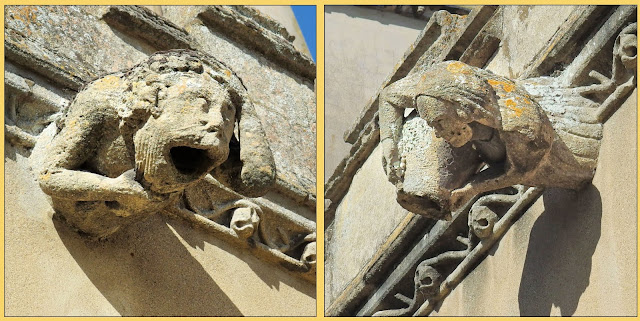 ....not only watched but being rudely attacked! Over church has some inventive gargoyles to funnel rainwater down onto the unsuspecting. 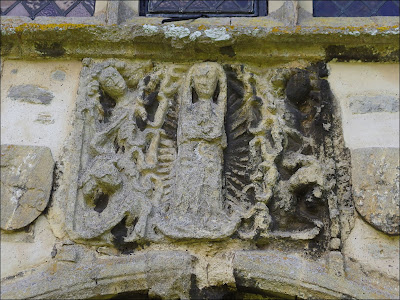 Above a door in the tower is this medieval representation of the Virgin Mary. One that the puritan iconoclasts must have missed. 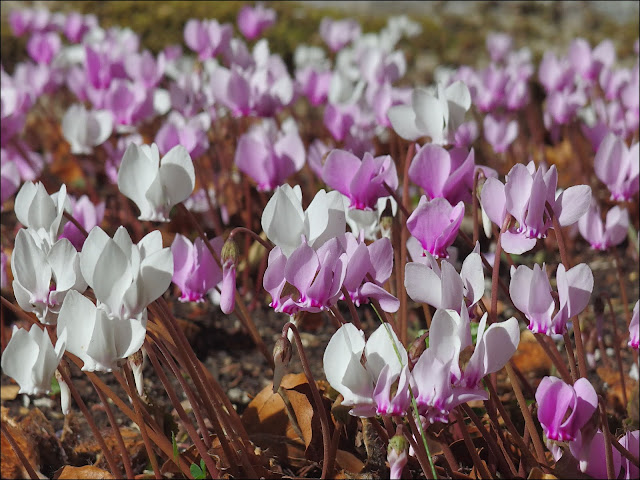 As I left the churchyard I met a man who was very enthusiastic about his local church "Some of the best gargoyles this side of Notre Dame!" he told me. He was delighted to learn that I had just been photographing them. At this time of year it also has one of the finest displays of cyclamen hereabouts.

Posted by John "By Stargoose And Hanglands" at 07:30

Email ThisBlogThis!Share to TwitterShare to FacebookShare to Pinterest
Labels: Cambridgeshire, Visits To Churches