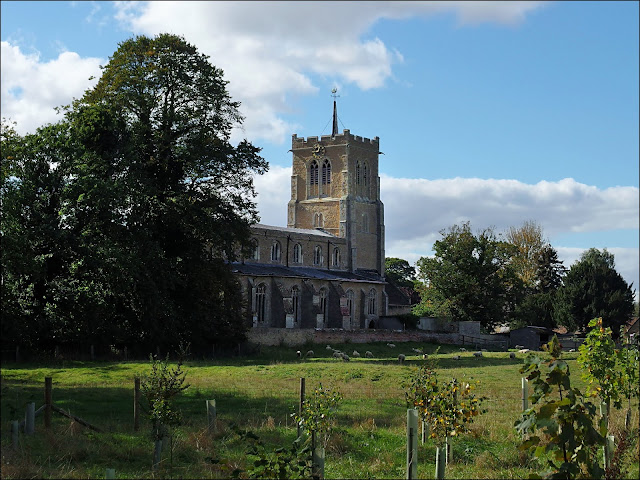 While making my visit to St Mary's church at Over recently I took the opportunity to walk the mile or so down the road to the neighbouring village of Swavesey. It's another place with a big church, reflecting the former importance of the area. 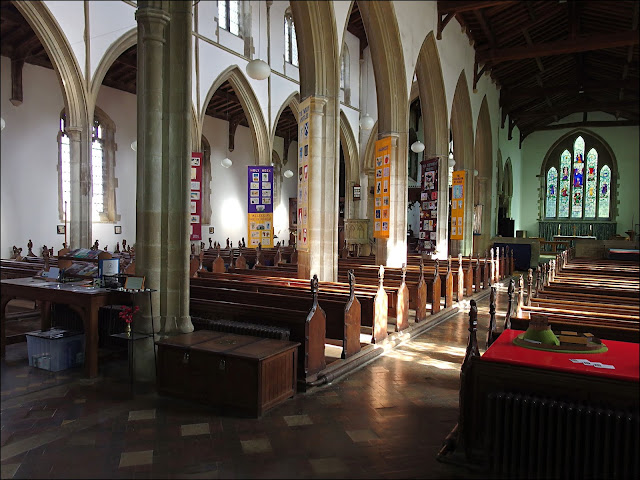 By the 1860s the church was in need of extensive restoration. One small aspect of this work was to replace most of the pew benches. If you look carefully at the photo above you'll see that there are small carvings on top of each bench end. These are known as poppy-heads, a name which derives from puppis which means the figure-head on a ship. Lets have a closer look... 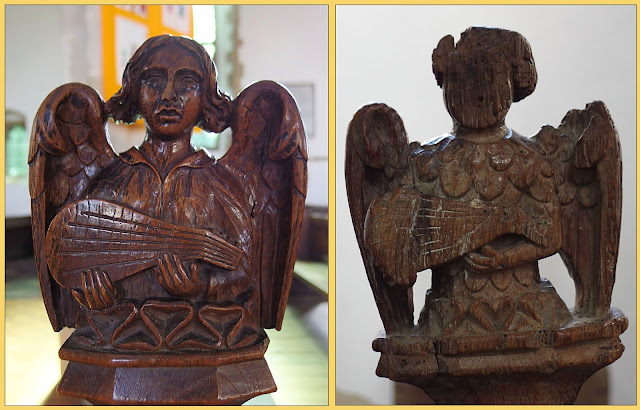 During the Victorian period there was a belief that our churches should be returned to some kind of medieval perfection. A few 15th century pews remain here and the picture on the right above is almost certainly a rather battered medieval survival, whereas the one on the left is a nineteenth century copy. Many of the 120 poppyhead designs on show are copies, but no less interesting for that. 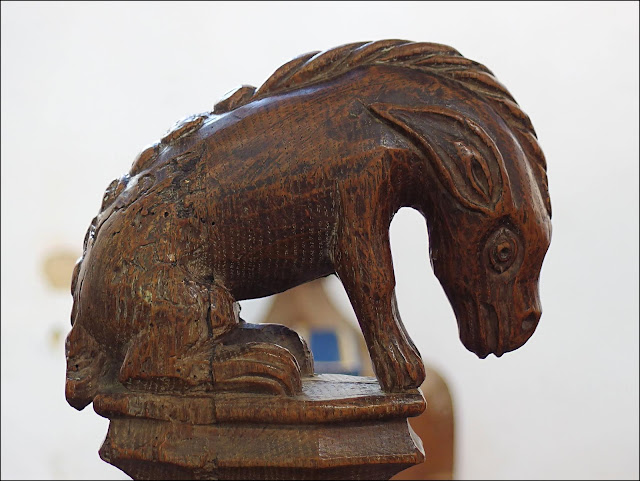 Sometimes the Victorian craftsmen incorporated any usable fragments of the earlier work. The front part of the ass (?) above seems to be grafted on to an older remnant. 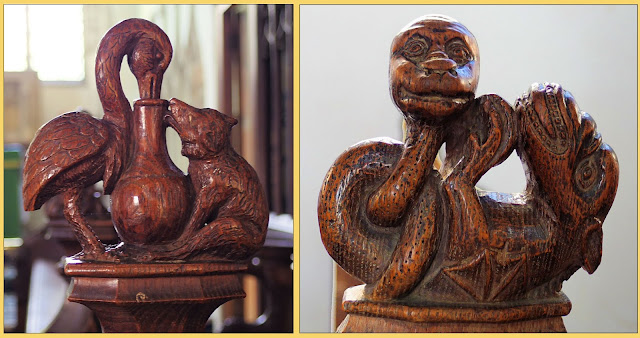 The style of the work varies enormously. The left one here could be a scene from a fable and strikes me as very Victorian. The one on the right however is just plain weird as many medieval carvings were. 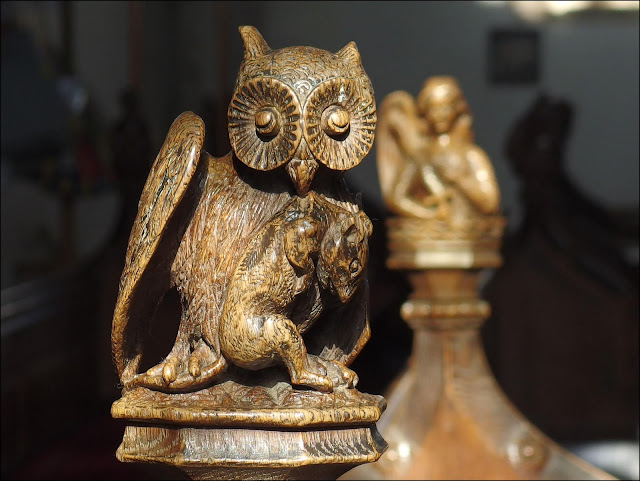 The owl here has caught a rat - predation by animals is often a theme in this set of poppyheads. 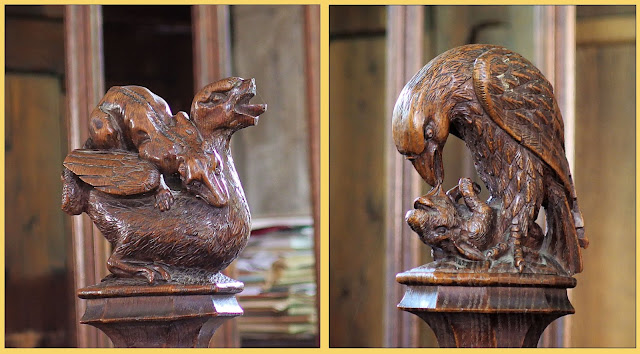 Sometimes the animals are mythical beasts of some kind, while others are clearly recognisable. 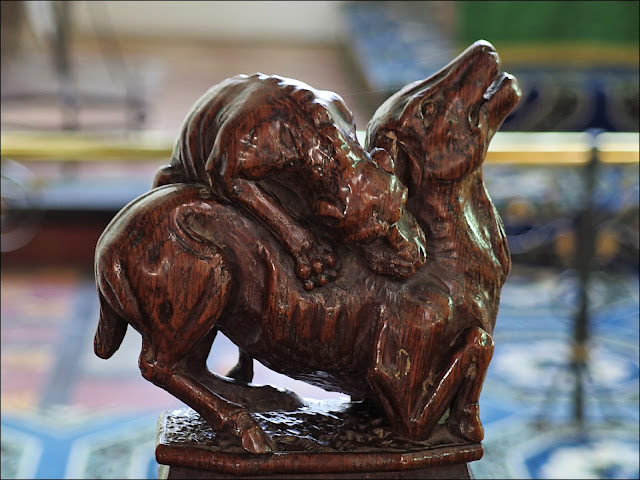 No one can doubt the artistry of the woodcarving, though most of the artists are unknown tradesmen. A few like Henry Ringham and William Polley are known to be associated with certain churches but here no one seems to know who the artists were. 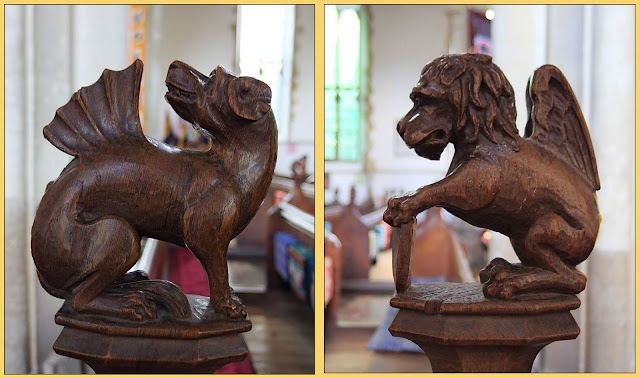 A dog is surprised to find it's grown a fin on its back. Nearby a lion with wings appears to resent having to hold a heraldic shield. 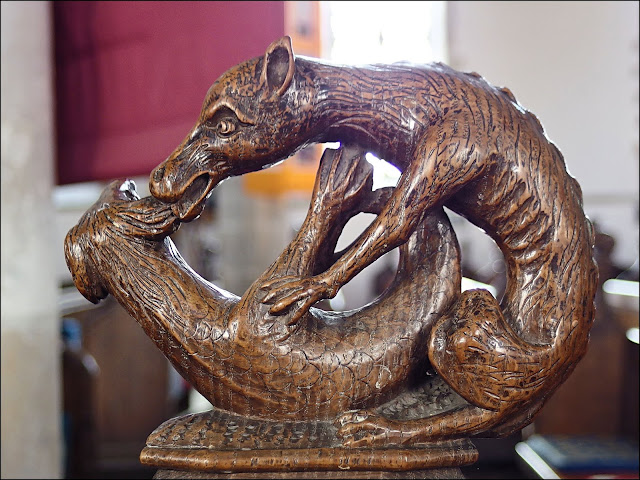 The style here, with oddly elongated forms but vigorous movement, is different again. Does this reveal different restorers, different original carving from earlier times or a mixture of both. 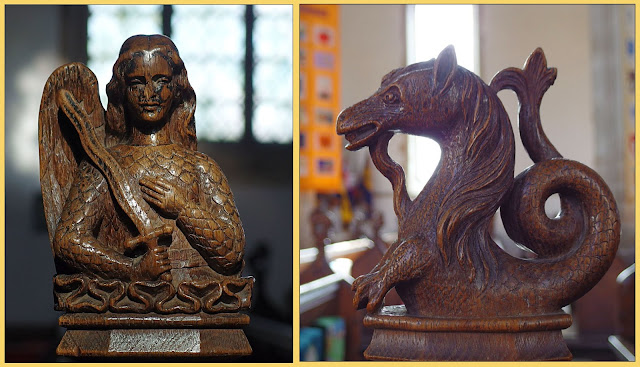 There were many angels amongst the assembled throng, though I seem to have concentrated mostly on the bizarre creatures. 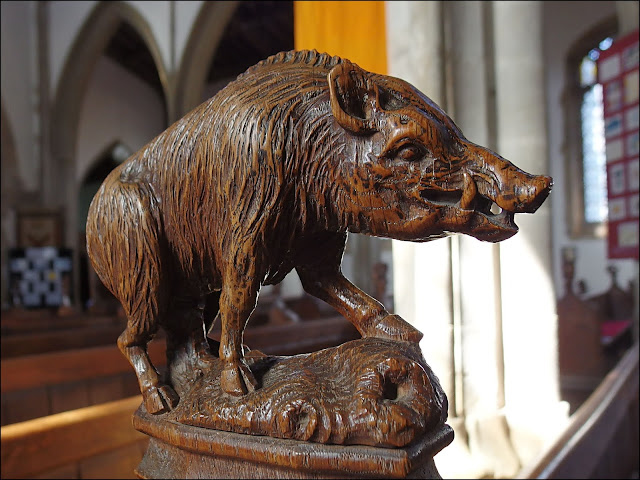 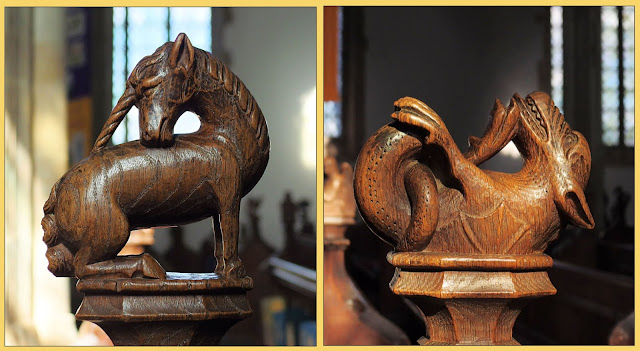 Here a unicorn seems to have found a use for his horn, scratching that difficult to reach spot. And a very odd-looking animal finds it all highly amusing.

OK. I got rather carried away taking pictures of these poppyhead pews. But there are more than 100 others, plus more in the choir stalls. And no one really knows why on earth such things find themselves in church, but there are many examples, both originals and reproductions, in the country churches of East Anglia.

Posted by John "By Stargoose And Hanglands" at 07:53