The country is opening up from the restrictions imposed because of the pandemic, but our walk on Friday was very local, just over the county boundary in Hertfordshire. That meant we had a fairly early start to proceedings. 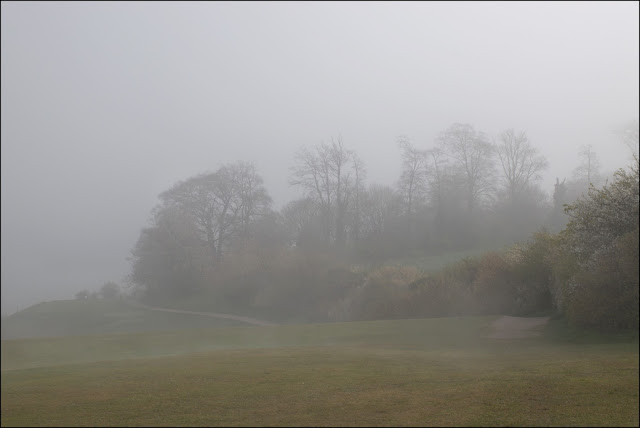 We are experiencing some rather strange April weather lately with overnight frosts and even a little fog around dawn; the above-average temperatures of the last few years have lulled us into thinking that we might be done with frosts in April, though I remember that the advice always used to be not to plant out any tender plants till late May. 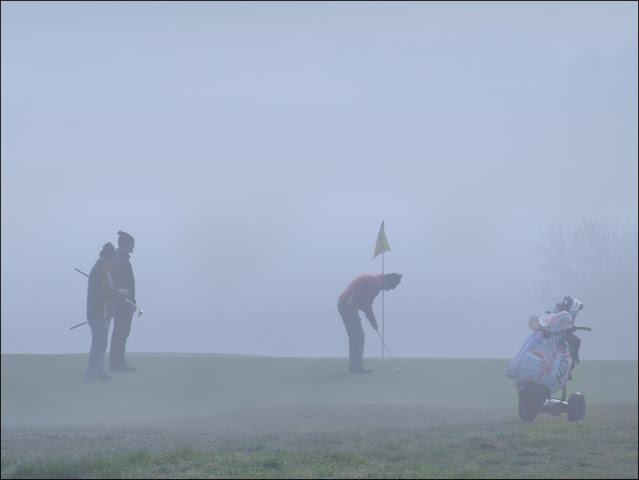 The local golf club has opened up too and there was no shortage of enthusiastic putters tramping through the early morning dew. 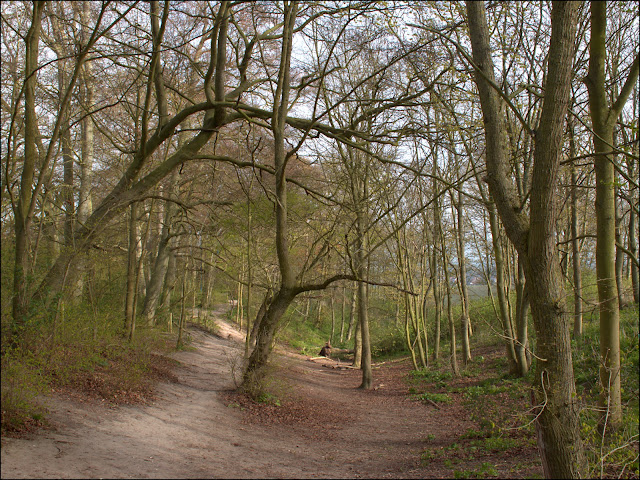 The strip of woodland running along the southern perimeter of the golf course is a very well-walked area, being so close to the town of Royston, and dog walkers were out in force as the sun began to break through the mist. 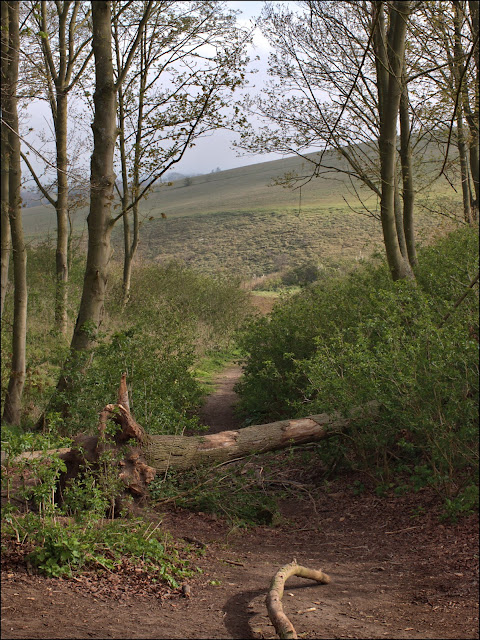 A tree has fallen across this little track leading towards the golf course. 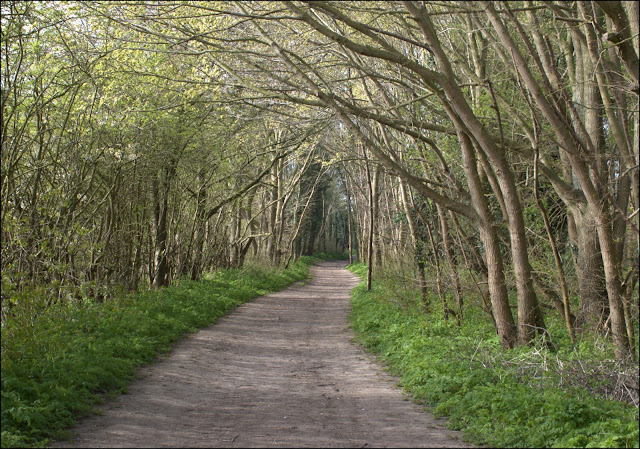 I'm sure this larger track must once have been the old road between Therfield and Royston, as it makes no sense for there not to have been a direct road. Nowadays, if you want to drive from one to the other, you have to leave Therfield by making your way along minor roads to the main road into town. Or of course walk along this ancient track; it'll be better for your health and you might spot Yellowhammers, Linnets and Corn Buntings singing from the hedges. 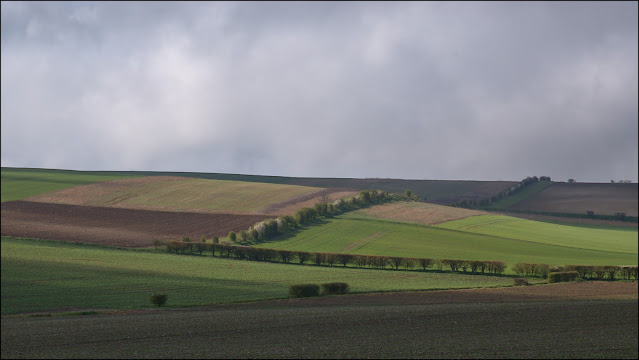 Not that there are many hedges in this heavily farmed landscape. It's doubtful that this was ever densely forested land as it forms part of the chalk ridge which cuts across the country, though it was never farmed as intensively, or insensitively, as it has been during the last century. 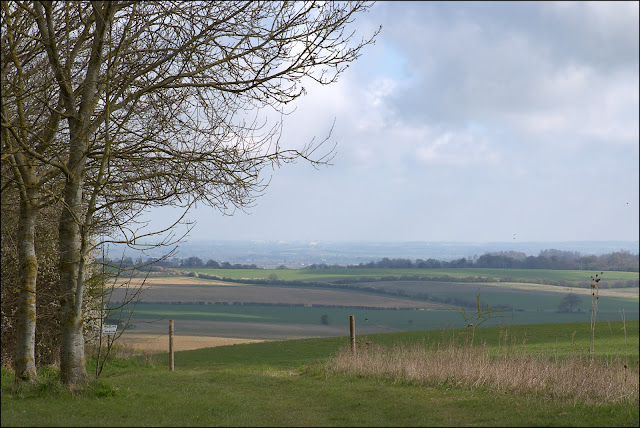 To save you straining your eyes, I'll tell you that the little white sign at the bottom left tells you that the narrow strip of land behind it is a "wildlife margin", part of what seems an inadequate gesture to redress the balance. But it's not the only environmental scheme here and while I was taking the photo a Raven flew over, a bird you wouldn't have seen in this area a few years ago, and just one indication perhaps that things are improving a little, here and there. 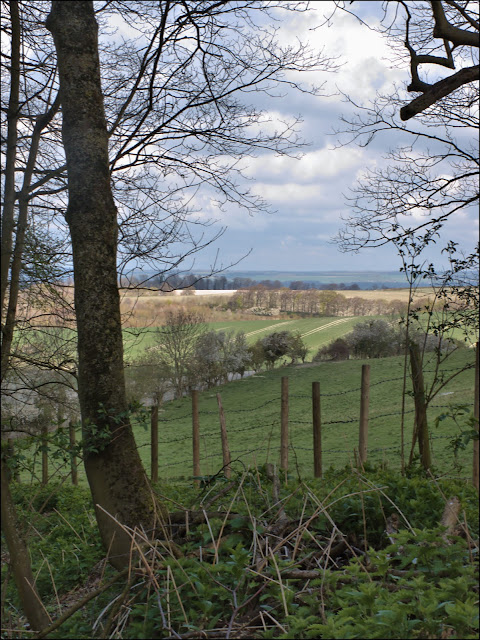 After skirting around the village of Therfield, we took to the sunken lane which gave occasional glimpses opening up over the surrounding fields, where we managed to see Fallow Deer and many Hares. 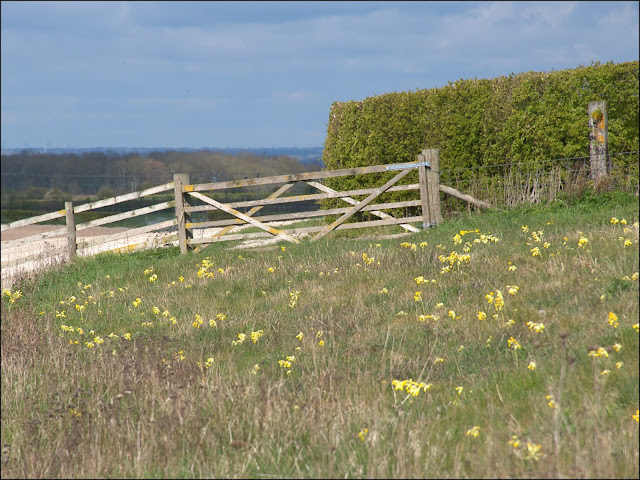 I'd often passed this small south-facing meadow, but never at the right time, it seems, to see its wealth of golden cowslips. 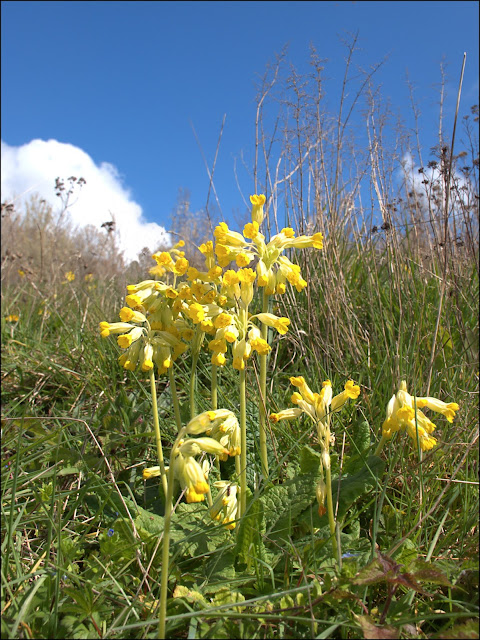 The meadow is fenced around so it was tricky to find a nice group of the flowers to photograph, but eventually this little scene revealed itself. But these were not the flowers I'd come to see. I'd approached by this lengthy route to be sure they were opening up and looking their best by the time I arrived. 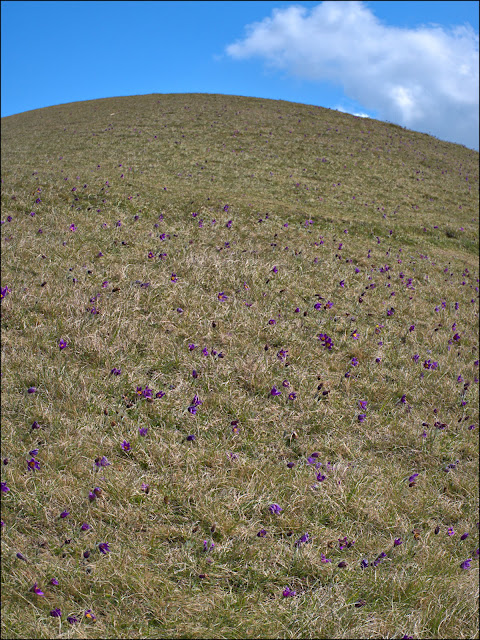 This grassy hummock is known as Church Hill and for a few brief weeks every year it hosts a small spectacle that causes the good folk of Royston and the surrounding villages to don their walking shoes and undertake a miniature expedition, for the grassy slopes become home to some small purple flowers. 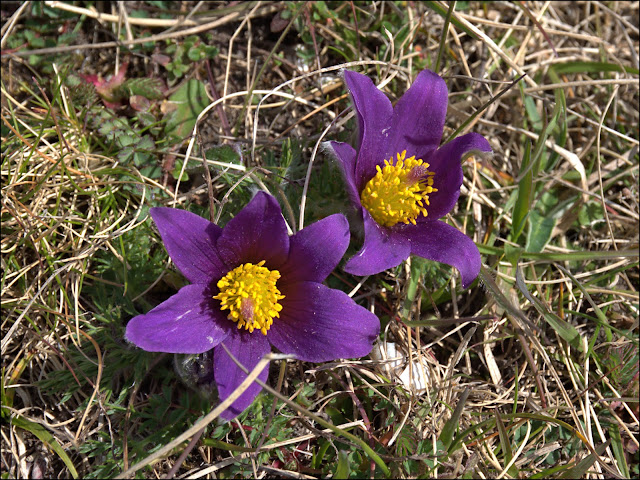 These are wild Pasque Flowers (pulsatilla vulgaris) and they are a rare plant indeed, occurring in just a handful of places in the UK. They get their name from "Paschal", meaning associated with Easter, as that's the time they flower. 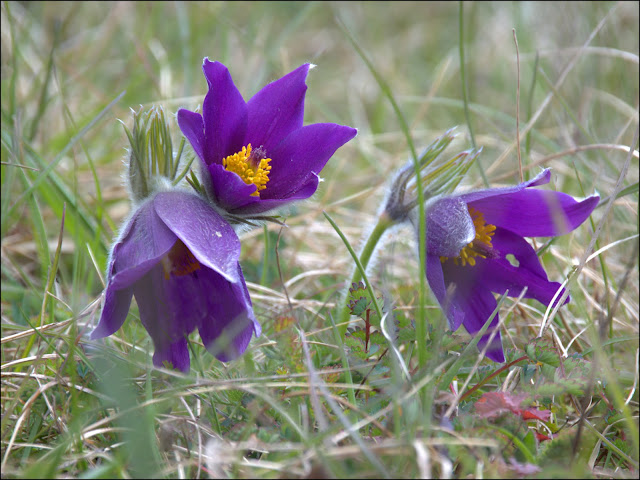 They are also grown in gardens, particularly on rockeries, but these garden flowers are much larger than those that grow wild here on Church Hill. By the way, I can find no reference to a church ever having stood near this spot. The only mention on the HeritageGateway website (a fine resource for anyone wanting to find out about historic building and sites in England) is of some low banks below the hill, these almost imperceptible square structures are thought to be medieval sheep pens, but have the imaginative local folk name of "The Devil's Hopscotch". 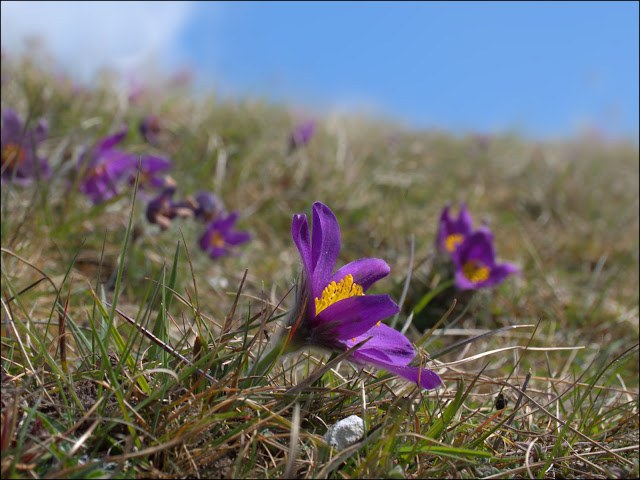 And, while we're on the subject of folk names, Pasque Flowers are also known as Dane's Blood, from a supposed link to old burial sites, of which there was one on Church Hill, but it was probably from the Neolithic period, so no link with any church there. 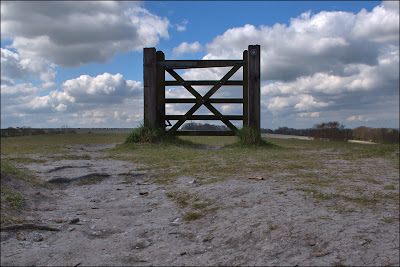 I can rarely pass without taking a picture of this absurd gate standing all alone (and in vain) at the edge of the golf course. No point in opening up the gate when you can walk round on either side.
On a different topic, I see that it's just ten years ago when I published my first post on this blog. A big thank you to all those who follow my gentle adventures and have contributed 17,420 comments over the years.
Take care.
Posted by John "By Stargoose And Hanglands" at 07:05