The willow tree has always had a special place in my heart. It may not be as imposing as a mighty oak, or even the ash tree that stood at the top of my childhood garden, but you have to admire the willow's sheer will to survive. 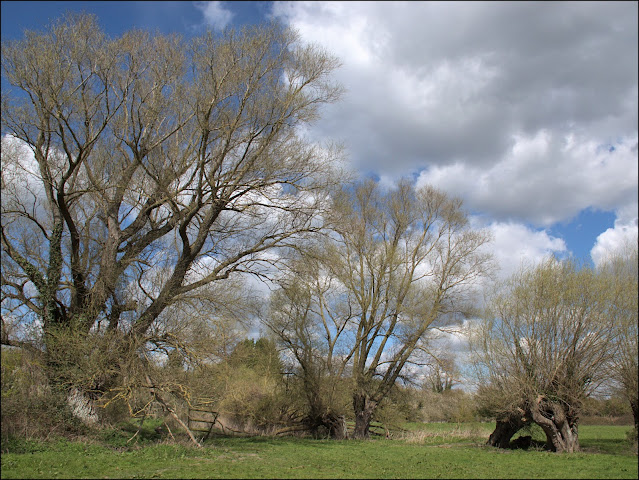 The trees I'm about to show you stand beside a small meadow, just a short bicycle ride from my present home. But there were willows throughout my life: some strange-looking trees grew outside a house called "The Willows" when I was a child. They had broad, stumpy trunks and a crown of thin, radiating branches, like the one on the right of the above photo. Every few years the branches were lopped off, then allowed to grow again; a practice I now know is called "pollarding". 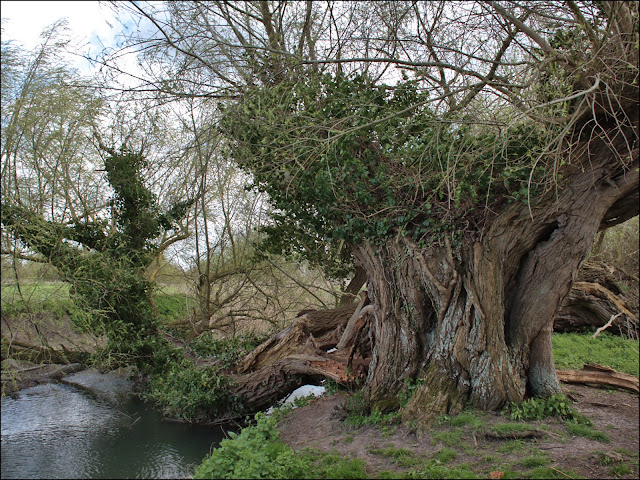 And these trees are also frequently split open by strong winds as they get older and the inside gets hollowed out. This also happened to the trees on Grantchester Meadows where I often wandered in my teenage years. 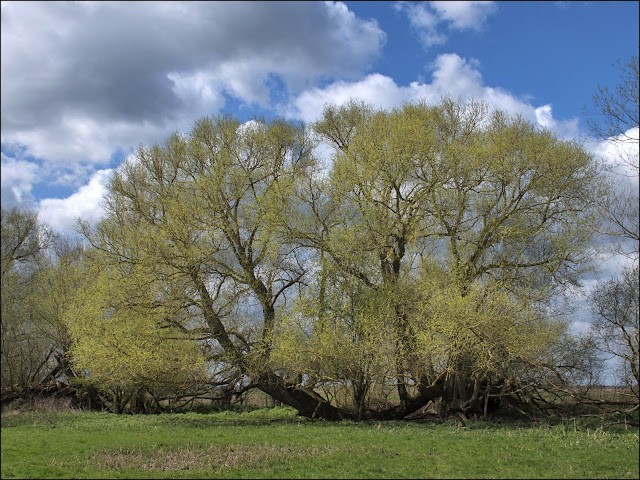 At first sight the tree above looks like a natural and graceful addition to the scene. But on closer inspection you can see that the trunk is at the back, way over to the right, while 75% of the growth is from a huge branch that has succumbed to gravity and is now resting its elbow on the ground. But despite all this it still bursts into leaf every spring! 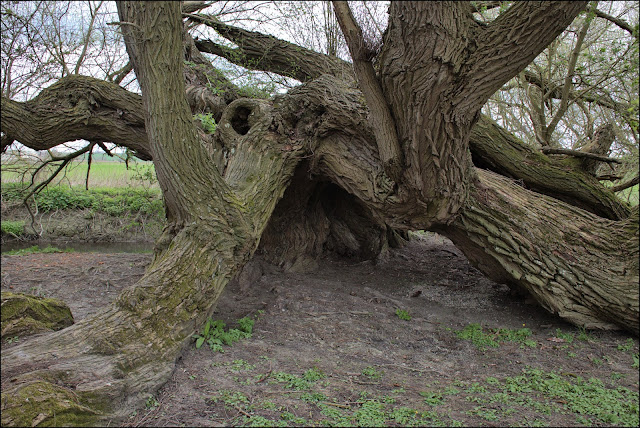 This is the tortured tangle of timber that you see close up. Like an elephant....or an octopus....or those writhing, anthropomorphic creations of the illustrator Arthur Rackham? 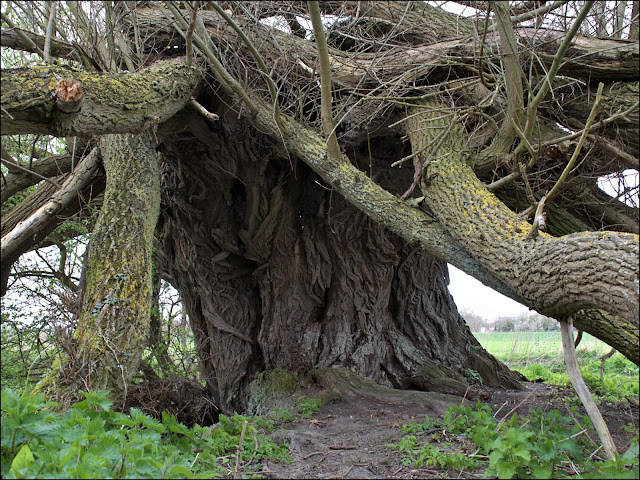 What I think must have happened here is that the trees were once pollarded, but when the branches began to shot up they were then left untrimmed - for centuries perhaps. Their weight was too great for the tree to bear and they gradually descended to the ground. But, as they are willows, they just kept on living as if nothing untoward had occurred. 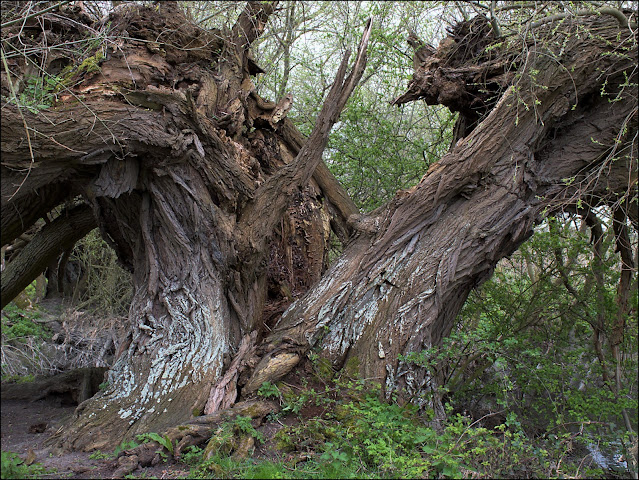 Some trees are split asunder by the forces involved but, although the heartwood has completely rotted, both halves of the tree continue to produce new foliage each spring, while the disintegrating centre provides a sheltered habitat for all kinds of other life. 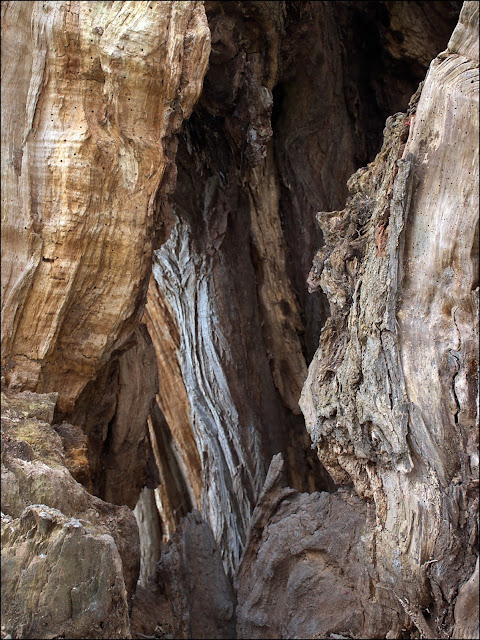 Small people, and perhaps elves and fairies too, can climb right inside. 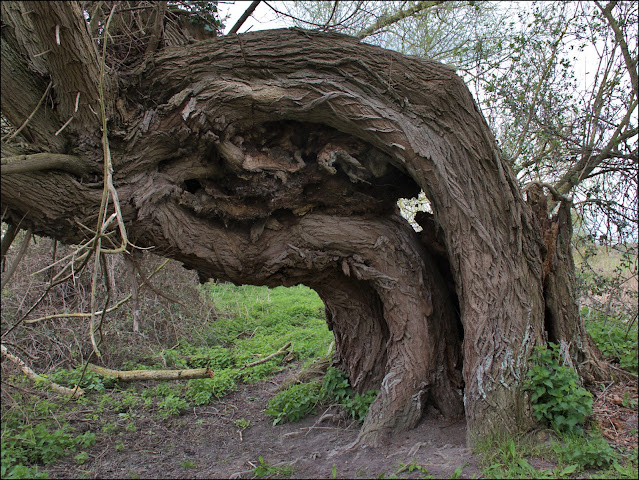 There seems to be no indignity that a willow tree can not survive. You can cut off a pole, stick it in the ground, even stick it in upside down if you like, and, if there's enough moisture, it'll grow into a new tree. If you think these trees' days are numbered then all I can tell you is that I thought that when I first saw these trees forty-odd years ago. 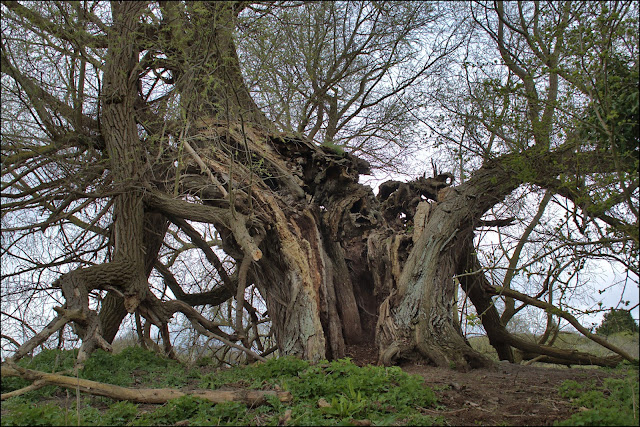 And if looking at all these twisted and shattered trees is giving you a headache, then all you need to do is chew on a piece of willow bark and it's said to provide a cure. 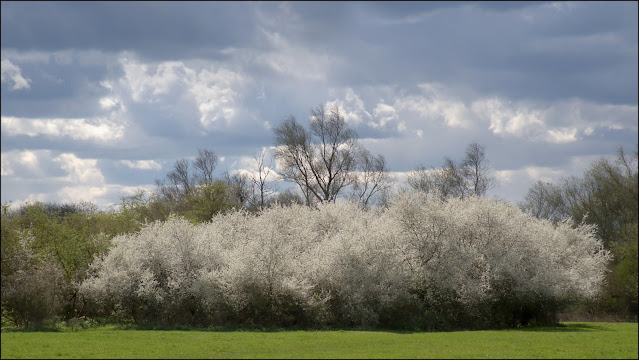 This is nothing to do with willows at all, but a blackthorn hedge which has suddenly come into flower in the same little meadow. Well worth a short bike ride.

And we'll finish of with a little music....

As you might have already gathered from his appearance - long, grey dreadlocks and stockinged feet - Steve Cooney is an interesting character. Born in Melbourne, Australia, he left home and went to live in an Aboriginal village to learn didgeridoo. He then decided to explore his own roots by moving to Ireland and played in rock bands, eventually ending up in the folk-rock group, Stockton's Wing. Nowadays he mostly accompanies Irish fiddlers, singers and accordion players on acoustic guitar. The fiddler Martin Hayes challenged him to make a solo album of Irish airs originally composed for the harp. That's just two of the beautiful tunes you're listening to.

You can only hear and buy the album here - Steve Cooney - harp tunes CD (stevecooneymusic.com) - as far as I know. A copy of the CD is on its way to me from Ireland right now.

Posted by John "By Stargoose And Hanglands" at 12:25