...or more precisely an irregular loop of a walk on the North Norfolk coast. 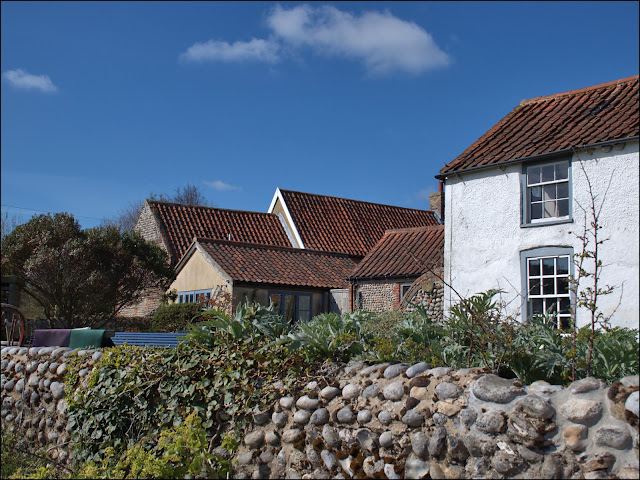 One day I promise I'll fully explore one of the villages of North Norfolk, as they are very different, architecturally and aesthetically, from the villages in my part of the world. But for today you'll have to make do with this shot, taken where we parked the car on Salthouse village green, and the next one, as we began our walk. 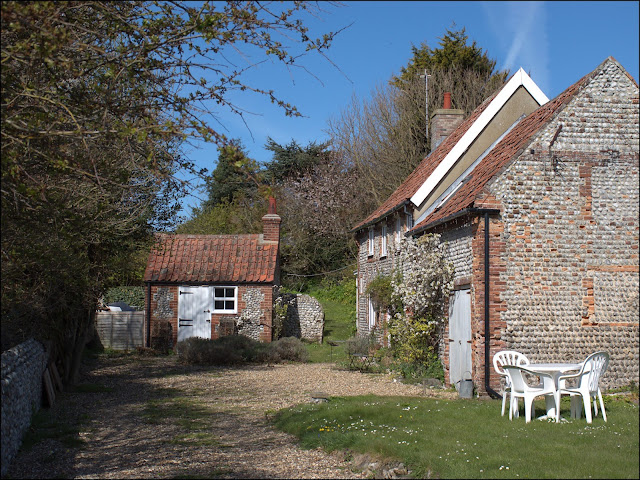 Salthouse was once a much more important place than it is today; it had a harbour for sea-going vessels and was a leading producer of salt. "Salthouse" means nothing more cryptic than a building for storing salt. But we're talking here about several centuries ago and since that time the coast has undergone many changes, destroying any archaeological evidence. 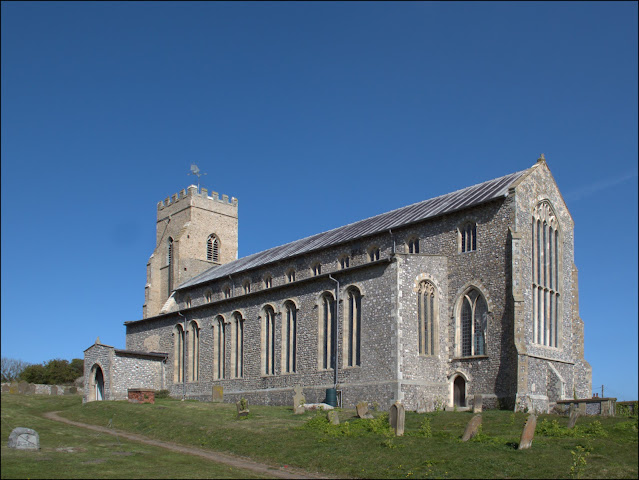 As befits this once important place it has a large medieval church which seems to have been built around the year 1500 and not much changed since. As the ports of this part of the coast declined there was never enough money to do much more than repair what was already in existence. One day I shall come back and investigate further. 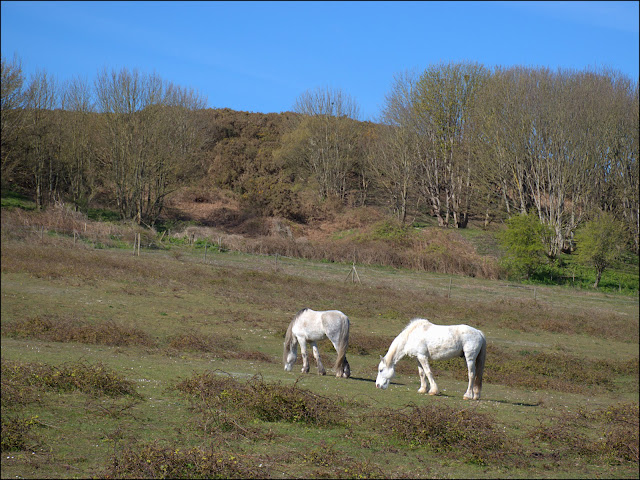 But now we're making the gentle ascent up on to Salthouse Heath which overlooks the village. This extensive area of sandy soils was dumped here by a retreating ice sheet during the Anglian Glaciation, about 450,000 years ago. The soils here are pretty worthless for most agriculture but give rise to interesting flora and fauna - probably at their best later in the summer. 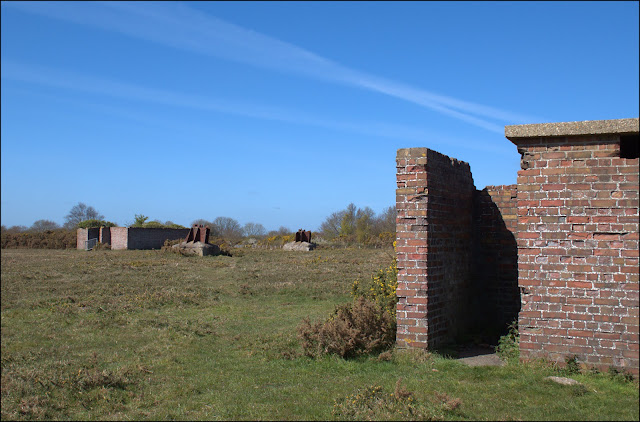 This rare hill in the otherwise flat topography was put to military use during WWII when a radar station was built here, parts of which remain today. 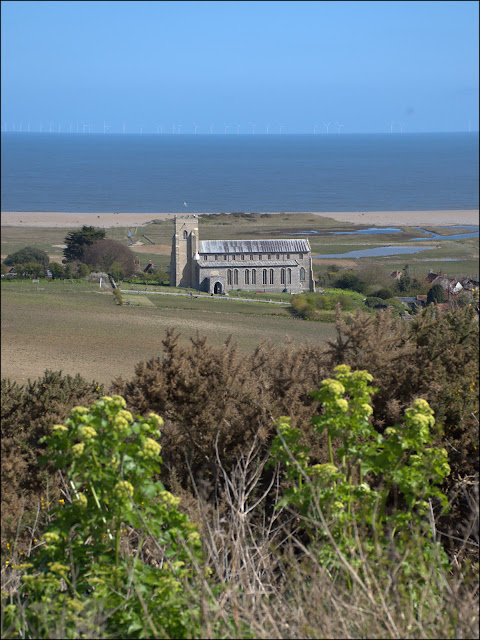 The Heath, despite its modest elevation, gives good views down on to the church. Like most churches in coastal locations, it stands in a large churchyard, a grim reminder that they frequently had to bury the bodies of those drowned at sea and then washed up on the shoreline. It's hard to imagine such things on such a fine sunny morning. 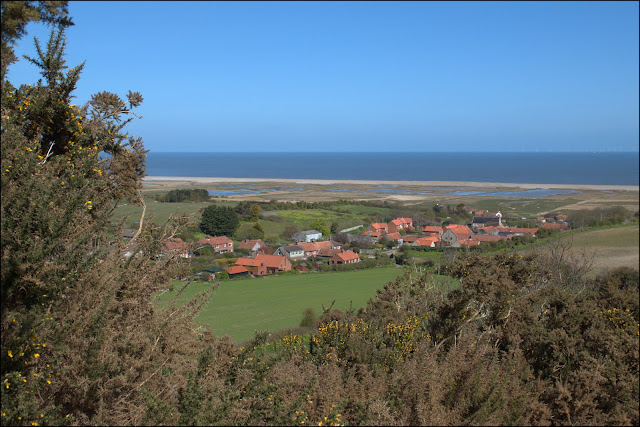 A little to the west of the church lies the huddle of red roofs of the main part of Salthouse village, with the saltmarsh and the sea behind it. 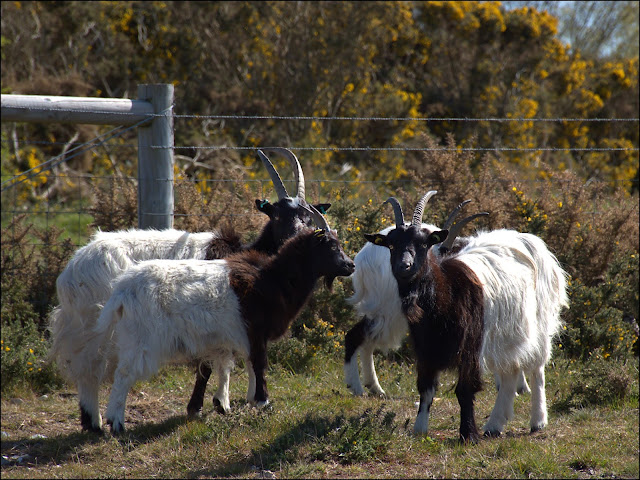 These are part of the crew who trim the heathland, which is maintained to provide a mosaic of environments for the wildlife. 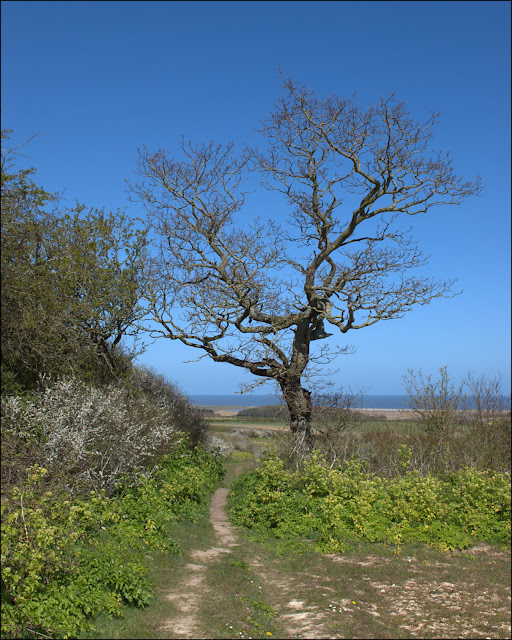 It was then time to find the path leading downhill, through farmland, down to the marshes and the sea. The yellow-green plant in the foreground is called Alexanders. I meant to take a photo of it, but if you follow the link you can find out all about it. 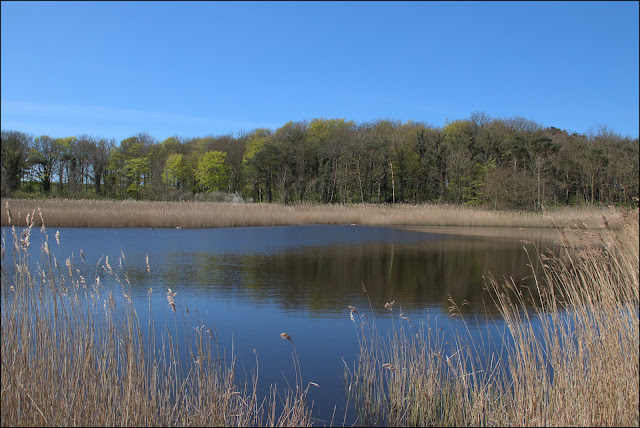 At the bottom of the slope there's a rather attractive pool, known as Snipes Marsh. Then we quickly cross the road and follow a bank, between the reedbeds of Cley Nature Reserve and Arnold's Marsh, towards the sea, 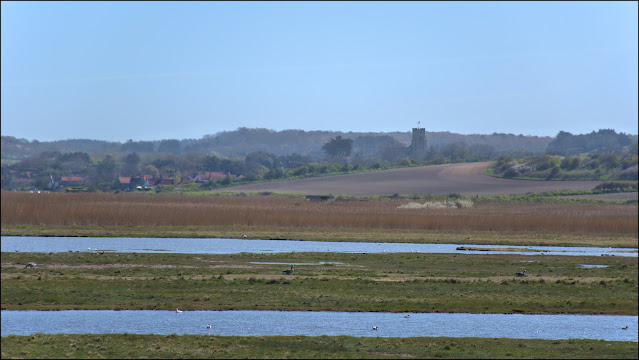 Peering across Arnold's Marsh you can make out the tower of Salthouse Church once again. Many of the churches along this coast are built in prominent locations, clearly visible from the sea, and this may well have been so that the towers could act as "landmarks", helping sailors to fix their positions and navigate their way through the narrow channels into port. 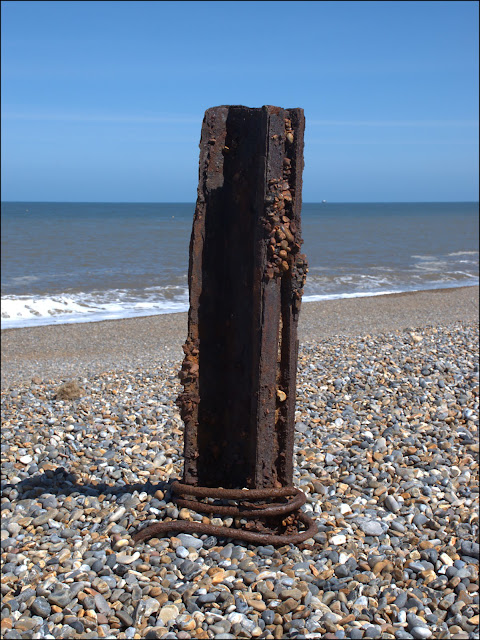 The beach here is a shifting shingle bank. A line of old iron posts may be part of old sea defences or maybe a relic from the Second World War. it's not the easiest surface to walk on, but it's a little easier on the landward side. 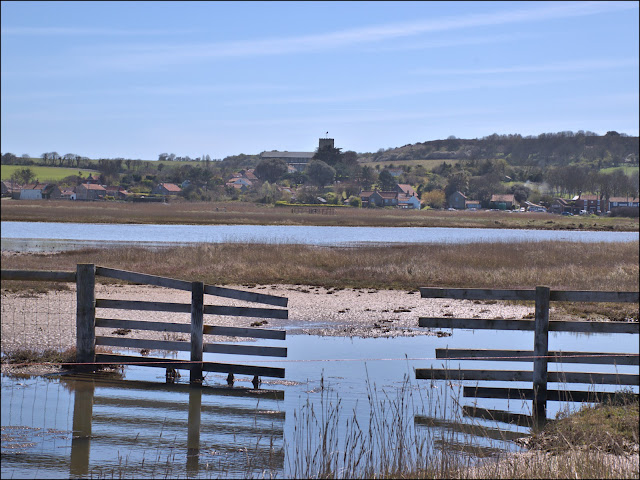 These brackish pools are much to the taste of wading birds such as Avocet, Godwits, Redshank, Knot and Dunlin, though sorting them out while looking towards the sun is no easy task. 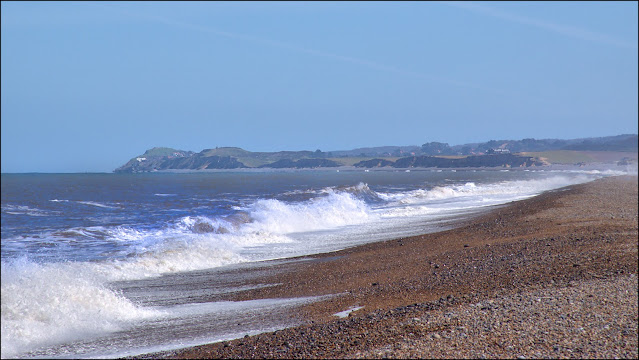 The trick when tramping along the shingle is to know when it's time to turn inland again. On such a clear day as this it wasn't too much of a problem. 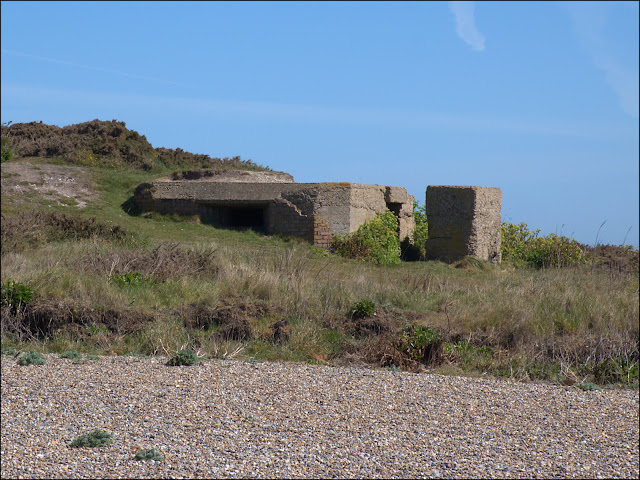 You just have to watch out for this old wartime pillbox on a slightly raised area called the Great Eye ("eye" being the name for an island in these parts, which I believe comes from the Viking word "øy"). There was once a very odd-looking house standing here, a folly built by someone called Onesiphorus Randall, (England is a land of eccentrics!). 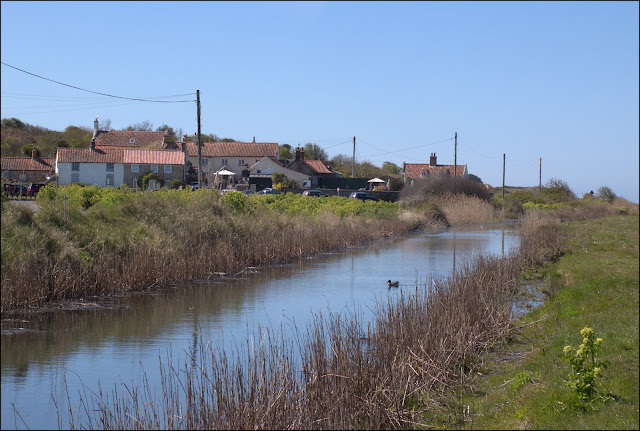 And then we're soon back at Salthouse, completing a circuit of between five and six miles, depending on how much you roam about on the heath.
Take care.
Posted by John "By Stargoose And Hanglands" at 16:35