The walk we did in the previous post passed very rapidly through the village of Clavering, though in reality I couldn't pass through without making a detour to its church. 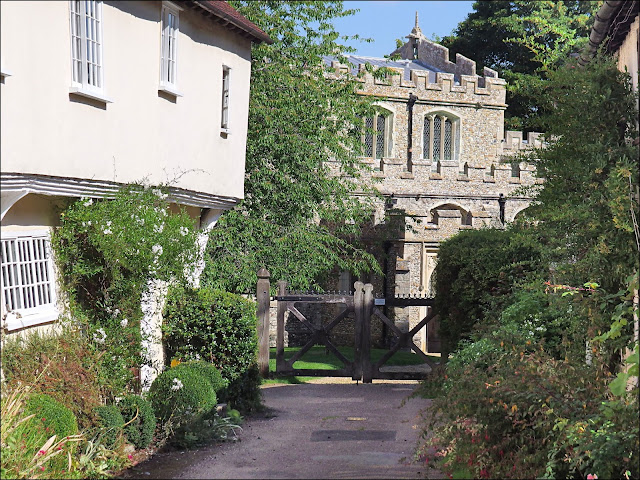 Yes, we're heading towards the church but first lets have a look at the building on the left. Judging by the angles of the corners and the windows it's been here for a long time and has sunk down and made itself comfortable in the landscape. It's now a private house but it's called "The Old Guildhall". It dates from the fifteenth century and is a Grade II* Listed Building. That little * after the II means that it's in the top 8% of Listed Buildings in the country, that is those buildings which have special laws applied to them designed to ensure their preservation. 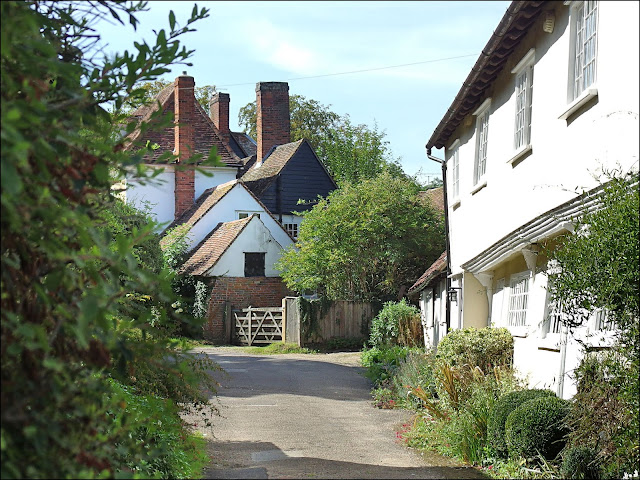 It's difficult to get a comprehensive view of the building but here it is looking in the other direction. Medieval Guildhalls were where the Guilds held their meetings. Whole books have been written about these Guilds and even then a lot of questions remain unanswered. In country areas like this they were usually closely connected to the church, as indeed most things were in those days. Avoiding time spent in Purgatory was a very important consideration for people then and one method of improving ones chances of a speedy entry to Heaven was thought to be the giving of alms. This had important social consequences as it was the only provision for helping the poor. The Guilds had the function of administering these funds within the parish. 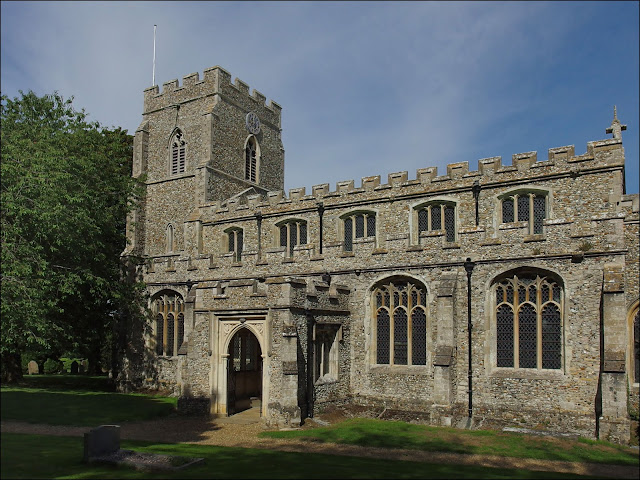 The very wealthy also contributed money to the church and it was often the case that the more prosperous the village the larger the church would be, often with little regard to the size of the congregation, though here the church and village are both fairly large. Like many churches it's a Grade I building, meaning it's in the top 2.5%. 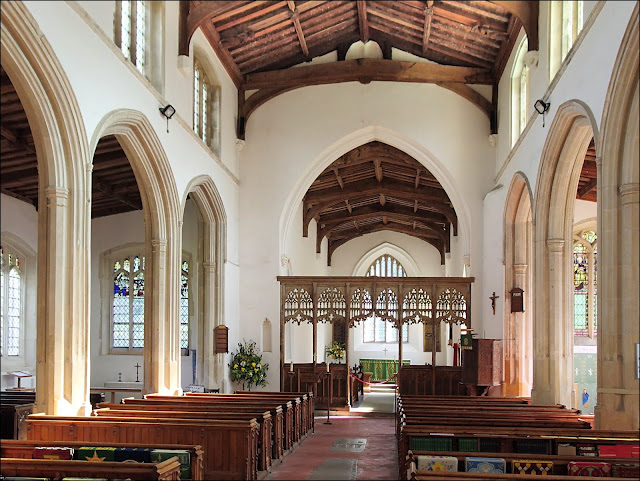 At first glance it looks to be a fairly standard church of the kind you'd expect to find in a large English village. But I can see something that's definitely of interest and a few things I'd like a closer look at. First those windows... 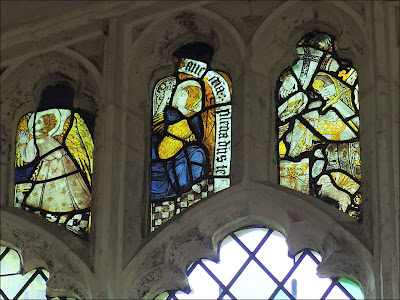 Did you notice that the coloured glass is only in the top parts of the windows? This is sometimes a sign that the smashing of the glass images by the seventeenth century iconoclasts was done imperfectly and remaining fragments have been pieced together and reinserted at a later date. So that glass is very old indeed. 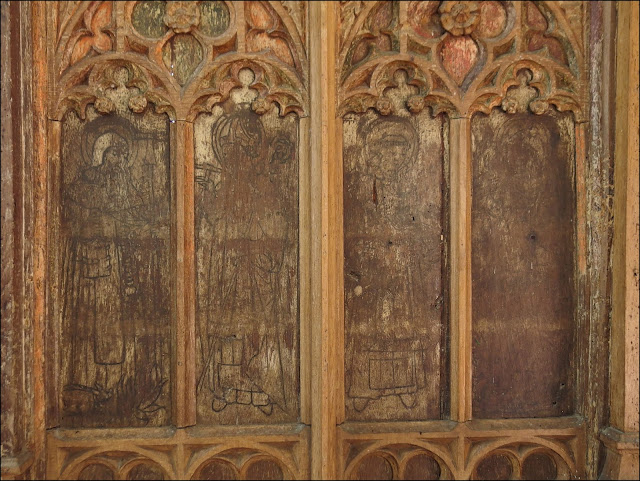 The rood screen (between the nave and the chancel) also looked ancient and on the dado panels are the faint traces of paintings of saints. Some of these have their faces scratched out, again probably the work of iconoclasts, but others seem to have fared much better. So perhaps the job was done hurriedly or half-heartedly. It's unusual to find old painting in this state; it's more often re-painted or completely invisible. 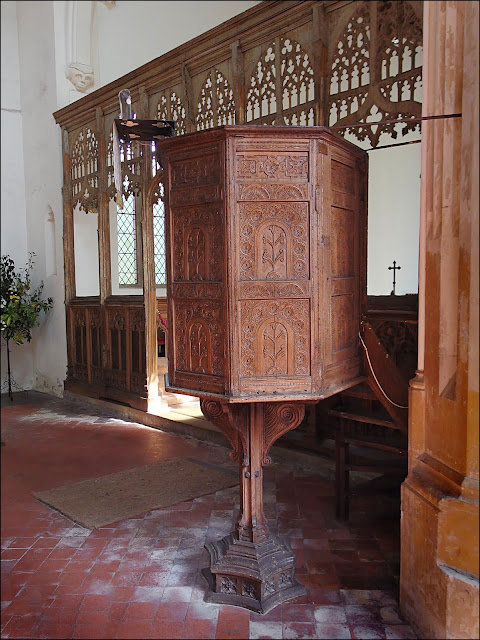 The pulpit is of "wine-glass" design, which always looks highly precarious till you realise that the steps, which are rather hidden in shadow, also help to support the structure. According to some information I found online the "stem" is rather older than the pulpit itself (fifteenth century and seventeenth century respectively). 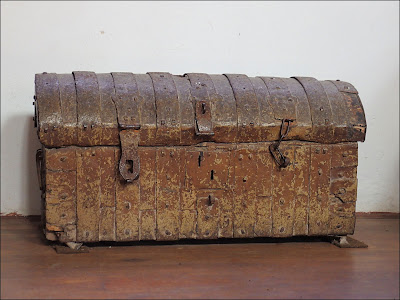 I've shown you a few of these before, but this is a particularly fine parish chest. The registers of births, deaths and marriages would be kept inside along with any other important documents relating to the village. There were always several locks to these chests and each of the keys would be kept by important people in the village so that nothing could be removed without the knowledge of all parties. Even so many parish records are incomplete.

I'll finish up with another couple of cottage photos from Arkesden: 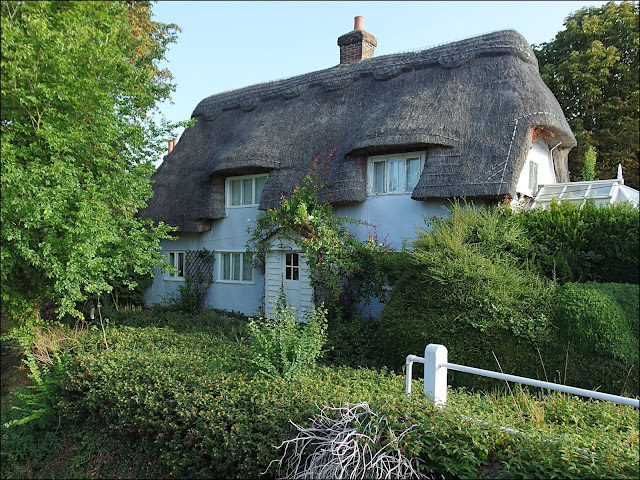 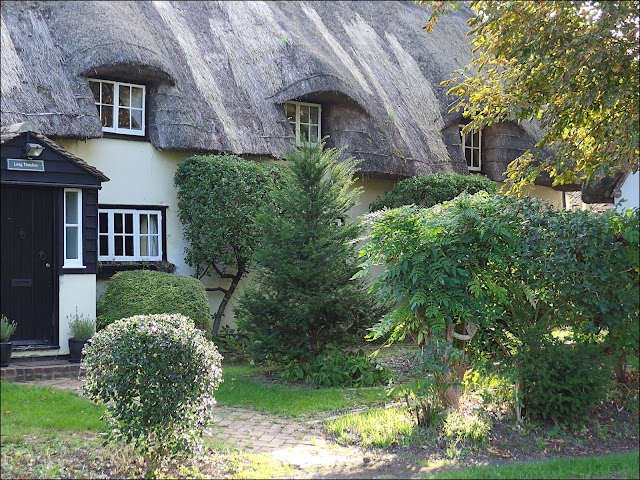 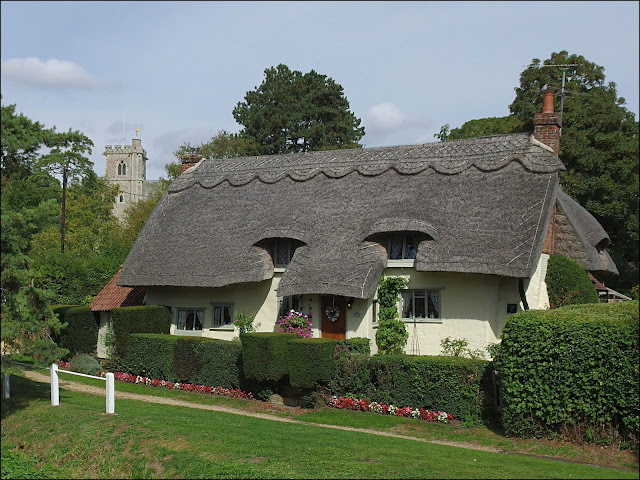 OK, there's three in that "couple"! A bonus for regular readers.

Posted by John "By Stargoose And Hanglands" at 18:03