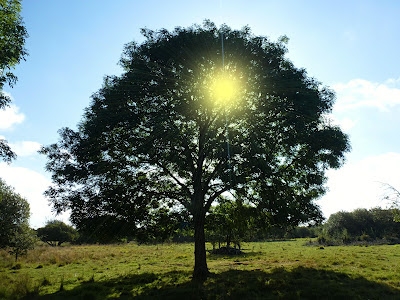 Who, on a beautiful day like this, would take time out from a leisurely bicycle ride through the English countryside to poke about in village churches? Well, I did. And I'm glad I did too. I had no intention of doing this as I set out and I had no prior knowledge of what I was about to encounter, but a theme emerged nonetheless. First of all there's Fowlmere Church... 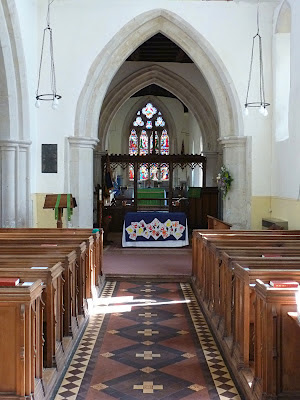 ....a pleasant enough building but nothing to really grab the attention. But hey, what's this? 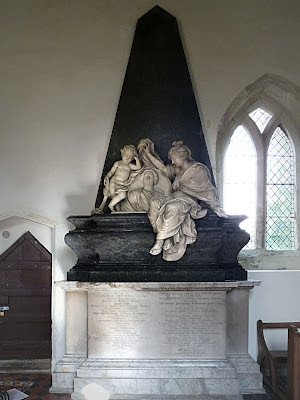 The monument to Sir William Mitchell by Thomas Adey. Sir William died in 1745 at the age of 43. That's  him depicted in the centre of the group. The figure on the right is thought to represent his wife though she appears to be rather informal and relaxed for a mourner, with her legs dangling in mid-air! The cherub on the left just looks bored with the whole affair. However there's no doubting the quality of the work. 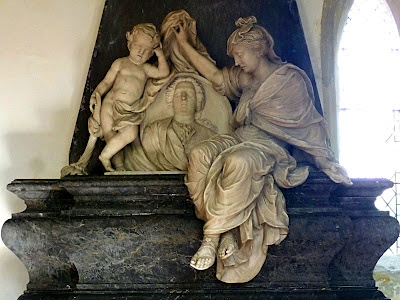 There is an inscription in Latin (and a handy translation) which tells you that he was "..sprung from the noble family of Bennets of Babraham, which he himself rendered more illustrious by his excellent gifts of mind and fortune". Furthermore his wife, Elizabeth, "..was a woman endowed with virtues rare in one of her sex, in that she had a man's sharpness of intellect and a mind well-suited to scholarship"

And on that teasing note I shall go out once more into the sunshine to pedal on to Haslingfield and a church I've passed countless times but never investigated. I even had friends who lived in the cottage by the church gate. 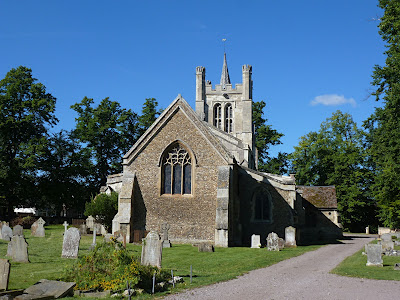 There were many interesting features including a painted ceiling (just visible in the picture below) and another elaborate memorial. 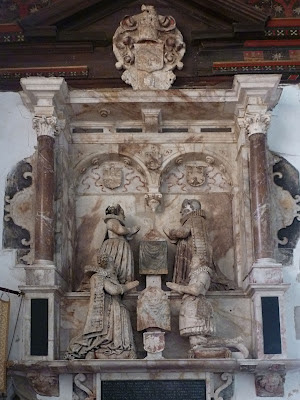 In fact there are several memorials and tombs to various members of the Wendy family. The most famous of them was Dr Thomas Wendy (d. 1560) who was Royal Physician to Henry VIII, Mary I and Elizabeth I and, although he was buried here, his tomb was removed when the church was restored. His nephew, Sir Thomas, entertained Elizabeth I when she stayed in Haslingfield in 1564. He kneels opposite his wife on his elaborate memorial with his son, Sir William and his wife. 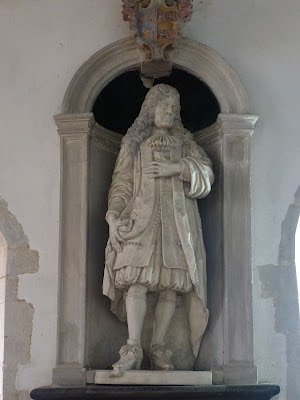 In a niche stands another Sir Thomas Wendy (d. 1673) looking sadly down. Dressed in contemporary clothes, it is a very early example of this type of monument. Incidentally you shouldn't take too much notice of those who say that the forename "Wendy" was invented by J M Barrie. Firstly it may be from the Welsh "Gwyn". But there's also a village called Wendy near here (from which presumably the Wendy family took its name) and Wendy was used as a forename, albeit for males, by another prominent family in the area. 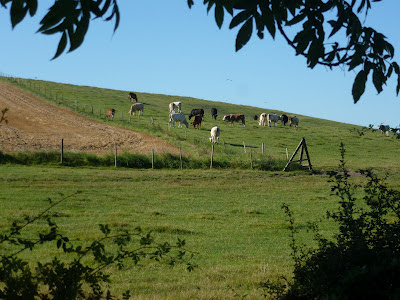 Now on to the neighbouring parish of Harlton and on entering the church there was immediately something unusual to be seen - the rood screen was made of stone; something I've never seen elsewhere. 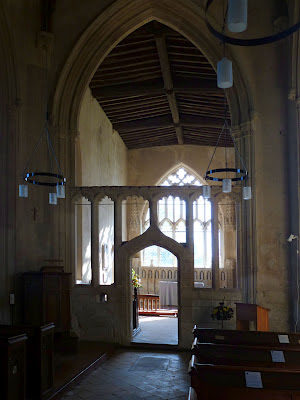 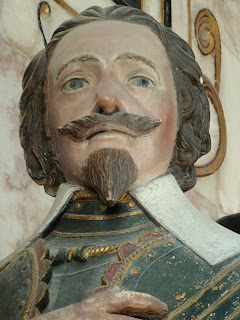 He is depicted wearing armour, kneeling between his parents, with his father dressed in robes to indicate that he was a physician. Henry's wife reclines below. They are flanked by mourning figures, the one on the left drying his eye with the hem of his garment. 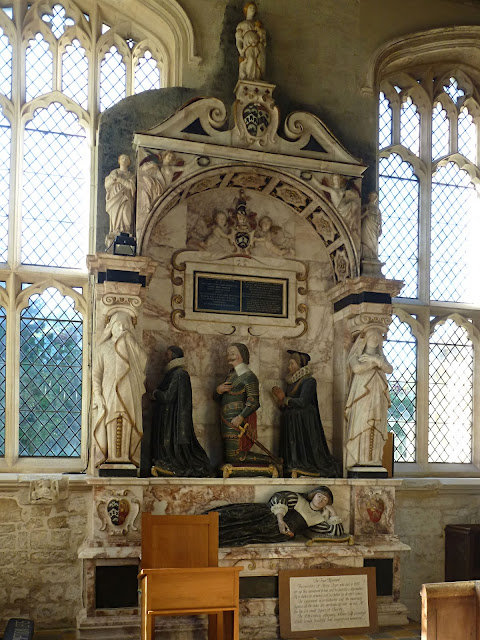 "Encloister'd in these piles of stone
The reliques of this Fryer rest,
Whose better part to heaven's gone
The poore man's bowels were his chest
And 'mongst these three, grave, heaven, poore,
He shar'd his corpse, his soul, his store." 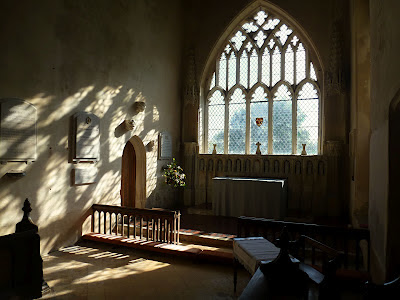 But the sun is shining in through the east window, beckoning me out once more into the glorious sunshine of this September day.

Take care.
Posted by John "By Stargoose And Hanglands" at 09:30