At St John's College they charge you £4 to enter. A man at the gate takes your money and hands you a leaflet. It tells you where you may go and what you should notice. 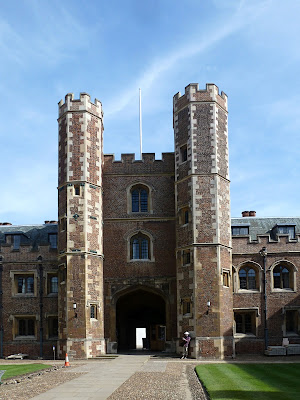 The Front Gate dating from 1516

Many signs tell you where you may not go. Areas are roped off. Members of the college only. Visitors this way. 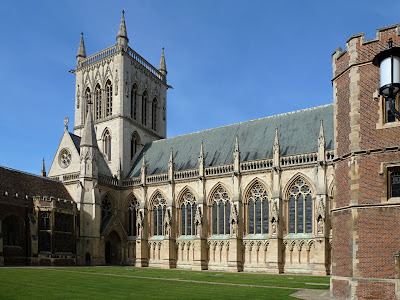 The nineteenth-century Chapel
the work of Sir George Gilbert Scott

Having duly noted the statue of the foundress of the college, Lady Margaret Beaufort, and the outline of the former chapel which can be seen on the lawn, I then duly missed the sign which said No Photography In The Chapel. 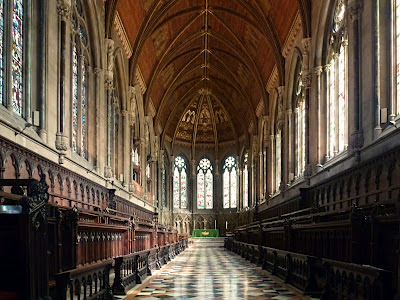 A smartly dressed man appeared out of the shadows and told me not to take any more photos. I mumbled incoherently like a schoolboy caught looking at pictures of naughty ladies. He didn't say what I should do with the photo I'd already taken. 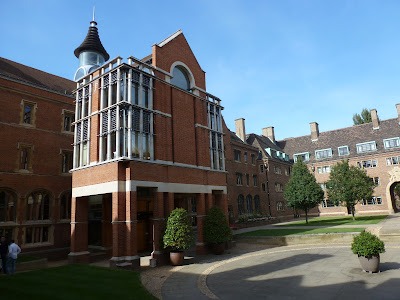 A blend of old and new

I scuttled out into the sunshine of Chapel Court, noted all the features which the leaflet advised that I should note, and made my way along the designated route to Third Court and the famous Bridge Of Sighs. Here, rather surprisingly, one of the college staff greeted me warmly and pointed me towards the location of a conference on comparative religion! My camera was stuffed in my pocket at the time and, with my spectacles, long greying hair and wild beard, I can only assume I was mistaken for some visiting eccentric academic. 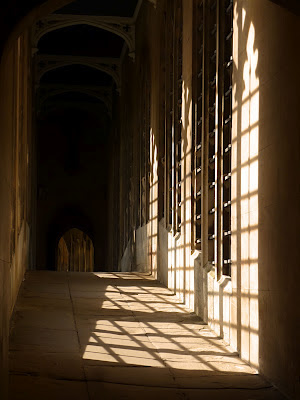 Inside the Bridge Of Sighs

Thus emboldened I wandered past the signs which were trying their best to divert me away from the Bridge Of Sighs and surreptitiously took a few snaps. The bridge gets its name from its somewhat tenuous similarity to a bridge of the same name in Venice - both are covered bridges. But, whereas the Venetian version leads from the courts of justice and was covered to prevent sentenced criminals throwing themselves into the canal, the one here was covered to stop raindrops pattering down on the heads of the privileged. 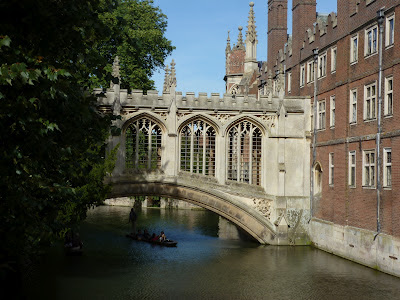 It's a beautiful structure nonetheless and can be seen to best advantage from neighbouring St John's Bridge, this is the way you're supposed to go. And from here you go to Queen's Road, go directly to Queen's Road, do not pass go, do not sneak into any buildings along the way, do not go by devious routes in order to take nice pictures. 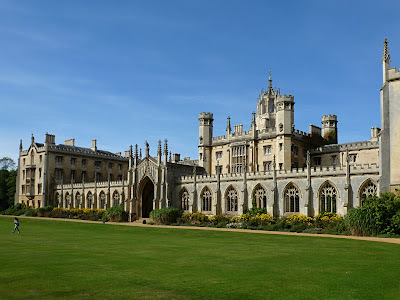 You go past New Court, which is actually 180 years old, and for me always the epitome of the College Backs though it is not without its architectural critics. There were signs for the Conference pointing into New Court, so in my new persona of The Rev Dr John Blogger, Emeritus Professor of Applied Misidentification, University Of Stargoose and Hanglands, I went investigating. 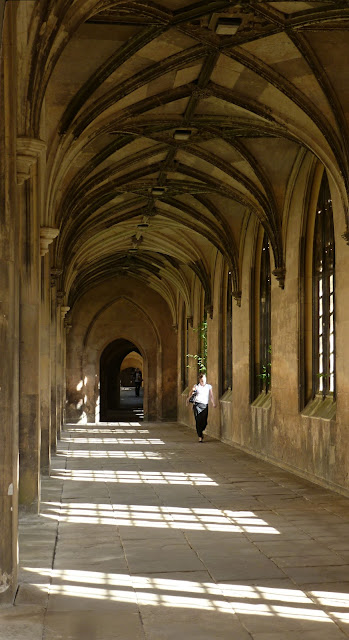 The cloisters leading from the Bridge Of Sighs

A man who looked very much like a former Member Of Parliament nodded in a friendly way as he hurried past. I carried on to the modern Cripps Building. 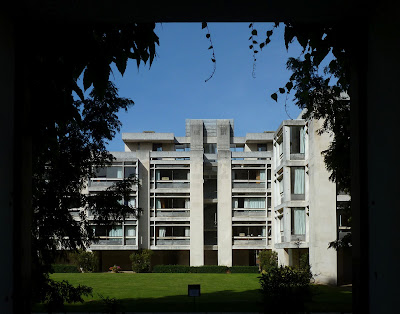 Since I didn't want to end up in a religious conference I beat a hasty retreat but then couldn't resist wandering round the huge lawns that back down on to the river. 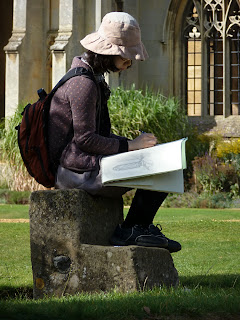 A delightful young lady was making a delightful sketch of the scene. I couldn't help noticing her despite the guidebook failing to give her a mention. 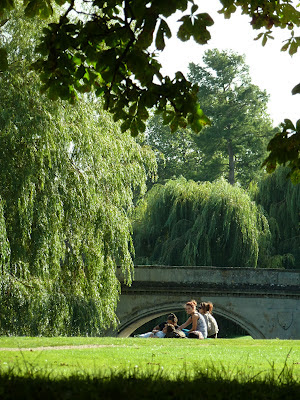 "Over Bridge Of Sighs
to rest my eyes in shades of green,
Under dreaming spires
to Itchycoo Park that's where I've been"

I followed the path around and exited through the obvious gate. It had an obvious sign on it  "Members Of The University Only".

Posted by John "By Stargoose And Hanglands" at 10:00