Last time, if you remember, you left my brother and I sitting on a log on the outskirts of a wood in the Brecklands of Norfolk. The man we were talking to got in his truck and drove off and we continued our walk. 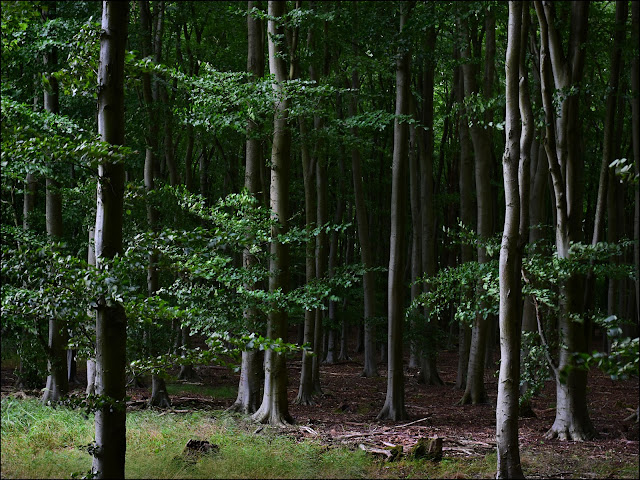 Part of the wood looked like a plantation, but most of it is an ancient woodland known as Emily's Wood. Nobody is quite sure who Emily was, but local legend has it that she was witch who lived here. Don't be scared though, she was a good witch who helped the village people when they were ill and her speciality was said to be a potion to improve male virility, though, as the village website drily notes, it can't have been too effective as the population of the village stayed the same for several centuries! 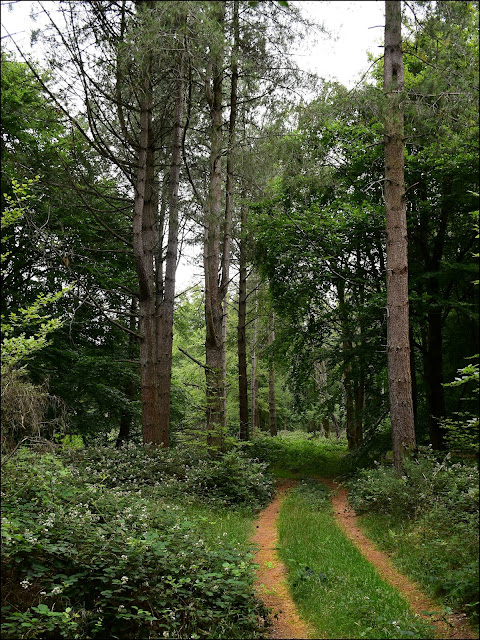 We found this track leading off to the left, but we were looking for a path on the right which was more elusive. 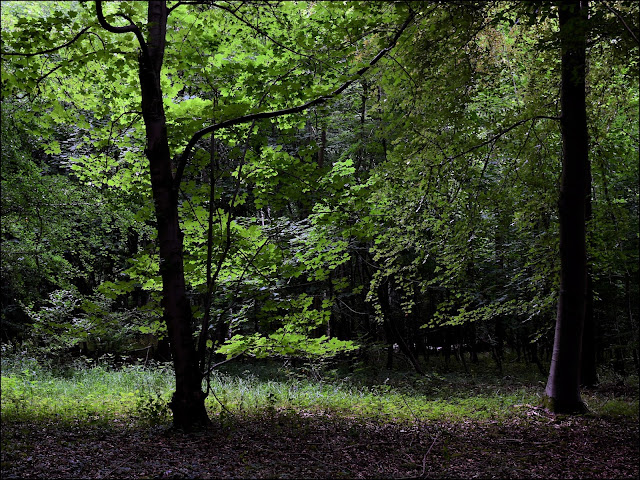 Much of the wood was fairly open so we decided to make our way through the trees following a roughly southerly direction. It's only a small wood so there was no real danger of becoming seriously misplaced. It would have been nice to find that path though! 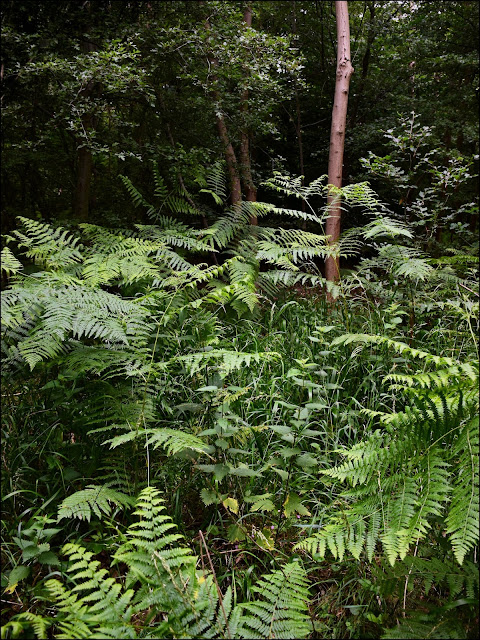 OK, there is no path! It's unusual for the excellent maps of the Ordnance Survey to mislead you and I suppose that the path has just become overgrown through lack of use. We could have done with some of Emily's witchcraft to open a trail for us! Thinking about witchcraft, it seems likely that most of the so-called witches were women like Emily, just women who learned the medicinal uses of plants from their mothers and grandmothers. Men of science or religion didn't understand them and, with no one to defend them, the unfortunate women became easy scapegoats for any unexplained happenings. 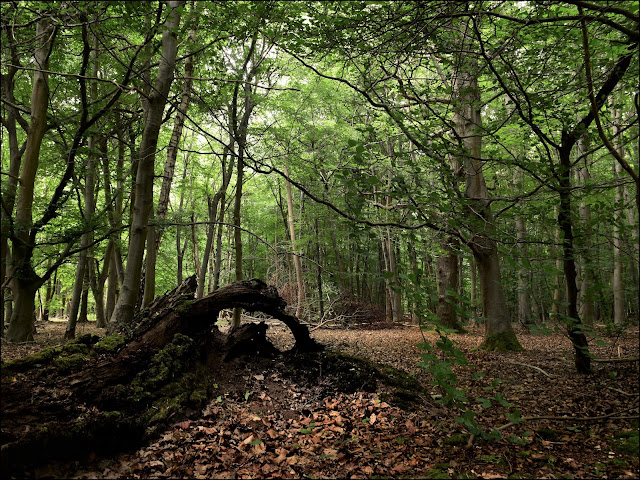 No one knows how old this wood is, but planting of woodlands, woodland belts and lines of trees as windbreaks has a long history in Breckland. It seems difficult to believe now, but early travel-writers tell that parts of the area were reduced to dust bowls, and sandstorms were frequent on this open country. Most famously the area known as Wangford Warren became such a desert that in 1668 much of its sandy soil was blown to Santon Downham where it buried the church up to two-thirds of the way up its tower and destroyed several farms. 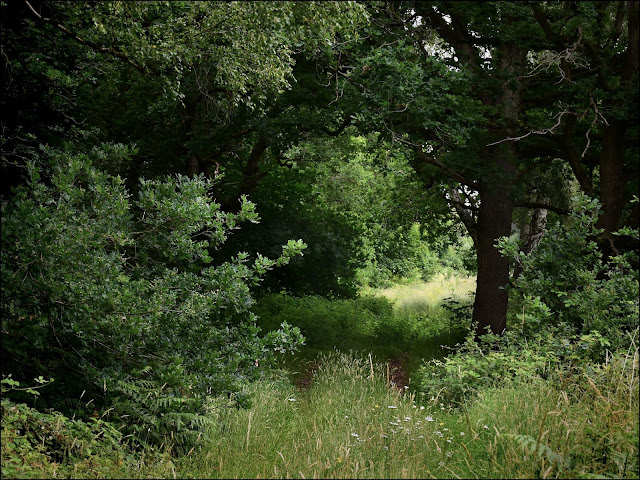 We eventually picked up some kind of track but by this time we were almost alongside the main road which flanks one side of the wood. 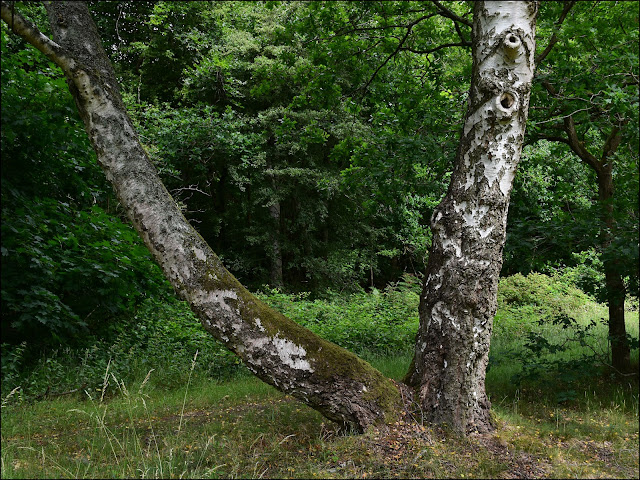 I must admit I enjoyed making my way through this small woodland; we have little enough of it in England. It's just a pity that there are so few decent tracks leading through it, though that probably appeals to the wildlife that reside within. 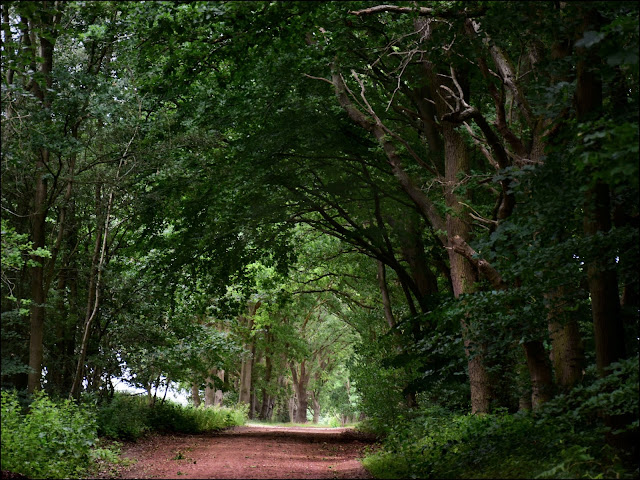 The photo above may look like a forest track, but in fact it's a tree-lined road leading through agricultural land towards a small farm. This incongruously grand avenue probably means that it's a survival from the days of Weeting Hall, a very grand country home that once stood near here. 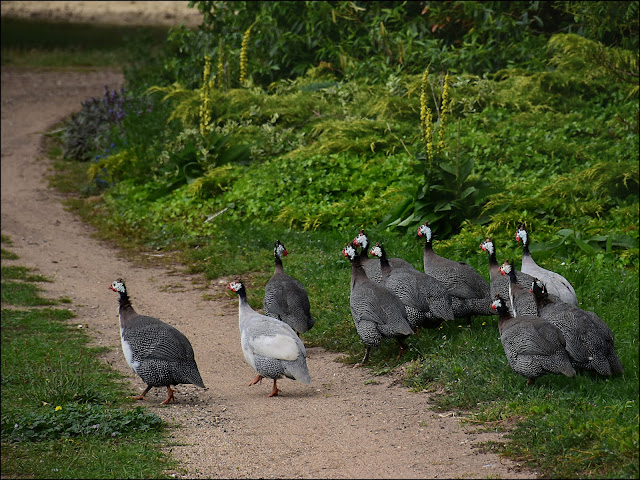 We found ourselves sharing our walk with a small flock of Guinea Fowl. These are kept by some farms so we guessed we were getting close to human habitation. 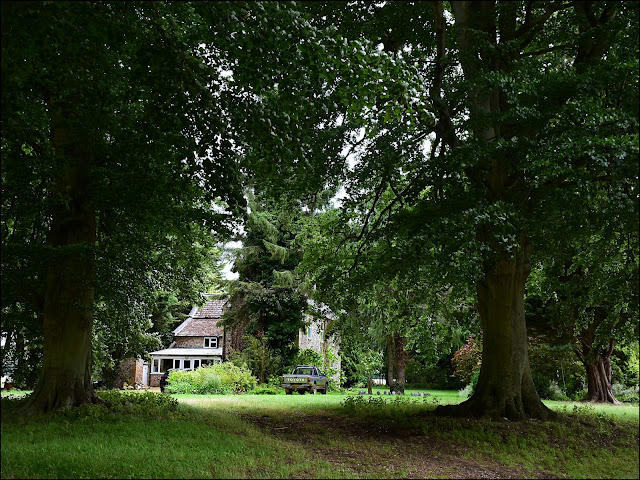 And there it is, tucked in among the tees. Maybe this was also once part of the Weeting estate. It looks a nice place to live. 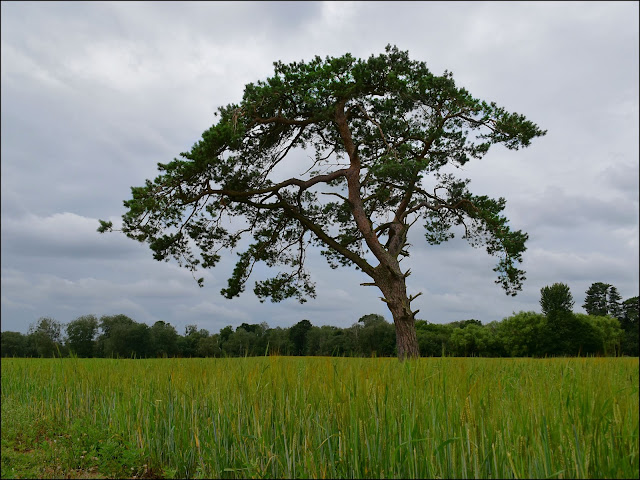 We made our way back towards Weeting village through arable fields. Online aerial maps show this bit of land was recently occupied by outdoor pigs, presumably making the land more fertile. Outdoor pig-rearing has become a lot more widespread in recent decades, mainly because it is a lot easier to comply with animal welfare laws by keeping them this way as opposed to housing them in industrial, high-density buildings. The pigs probably approve too. 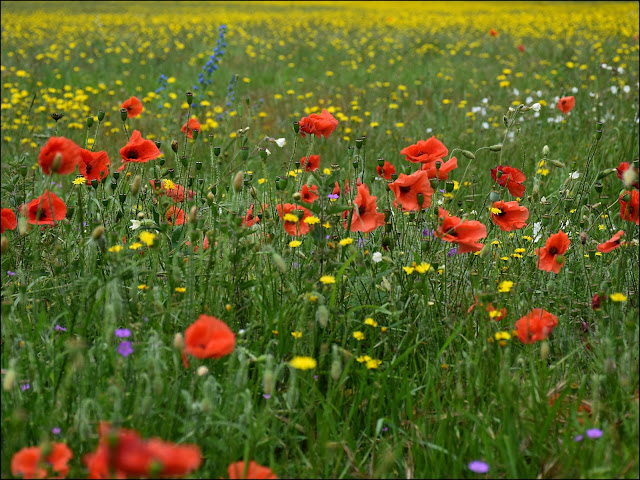 The last leg of our journey was along village roads, though as you can see these were not without occasional riots of colour. 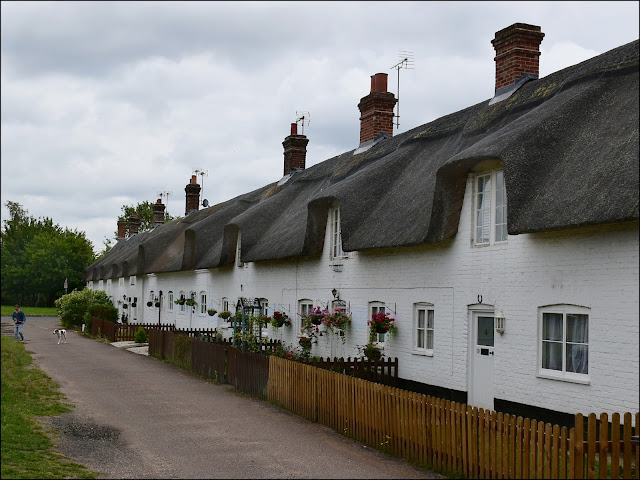 By taking a wrong turning as we entered the village (How often does that happen; I cease consulting the fine detail of the map when I think I'm back?) I found this row of thatched cottages. At ten dwellings long it's said to be the longest terrace of thatched buildings in the land. Despite its obvious charm it's not really a very bright idea as a house fire in any one could be disastrous for all.

Now to make our way to the car and drive back to my house for dinner.

*******
A short piece of music for a Friday, from the Joscho Stephan Trio:

No, my brother's driving was not as frantic as that!

Posted by John "By Stargoose And Hanglands" at 07:26