On A Wander From Weeting

Smack dab in the middle of East Anglia is a strange, ancient landscape known as Breckland. We're going on a five-mile stroll through this area and I'll tell you a bit about it as we go. We'll start off beside an unmade farm road in the village of Weeting, just on the Norfolk side of that county's border with Suffolk. 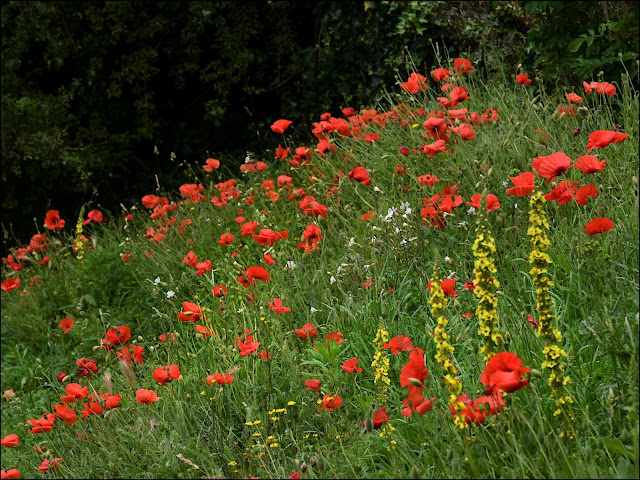 And on the bank bordering the dusty track is a fine show of wildflowers. Although this is not the most traditionally scenic landscape in Britain it is not without its charms and, as is true almost everywhere, much of its character is ultimately down to the underlying geology and how we've exploited it over the centuries. 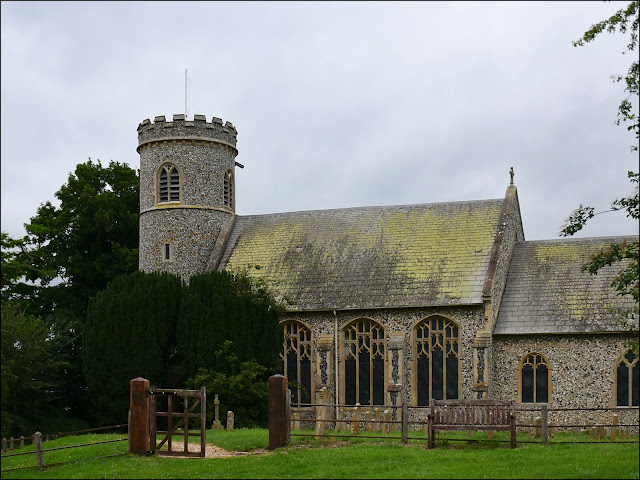 Raise your eyes from the flowery display and you'll see one of East Anglia's hundreds of interesting village churches. This one was largely rebuilt in the nineteenth century but with a traditional round tower. Round towers are a feature of churches around here and probably were built this way because there's a lack of local stone suitable for constructing the corners of such a high building. Of course there are all kinds of folk explanations, including making no corners in which the devil might hide and, even more preposterously, that they were in fact the linings of old wells before the surrounding soil blew away! 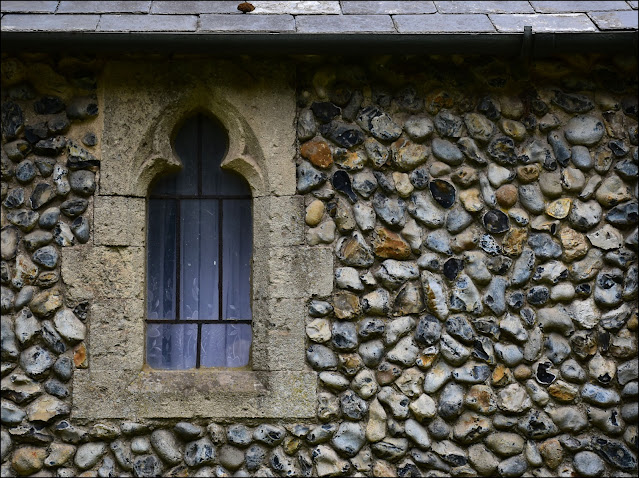 This is the stone that we do have to build with - flint. It is of course the material that was favoured for making axes and tools back in the stone age, but it has its limitations as a building stone. You can see that some of the stones have been "knapped", or split, showing the dark, shiny interior. I think flint walls are full of interest, texture and colour - very beautiful in their own way. 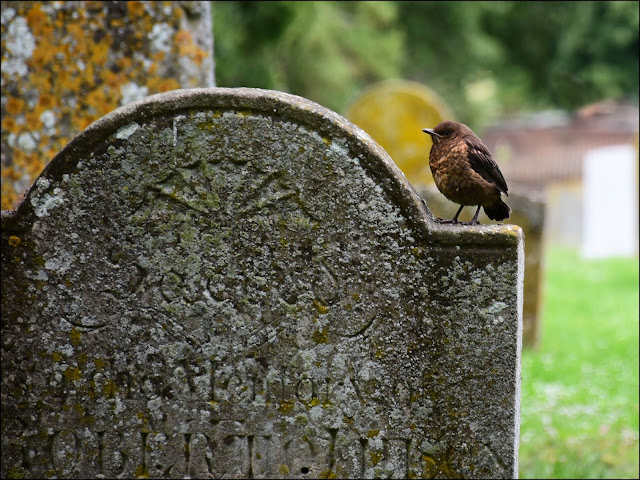 Perching innocently on an old gravestone is a just-fledged Robin, as yet unaware of the dangers in the world. 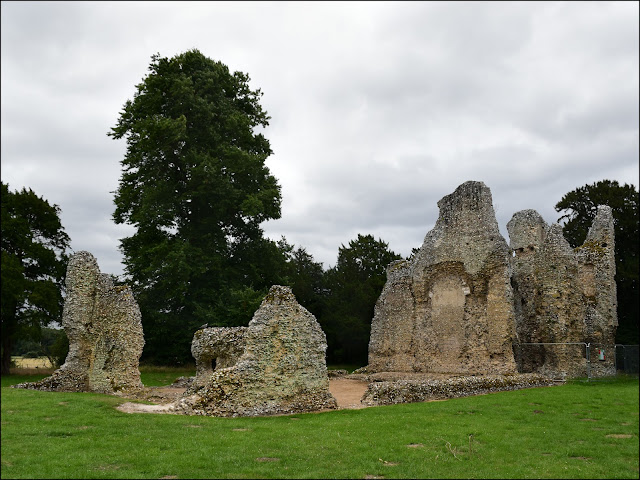 Right next to the church are these old ruins which are known as "Weeting Castle", though what we actually have here are the remains of a twelfth century manor house, built to impress but never fortified. It even had a moat, but again this was just for show. You can see why it was long thought to be a castle though. We'd better start walking if we intend to get anywhere today! 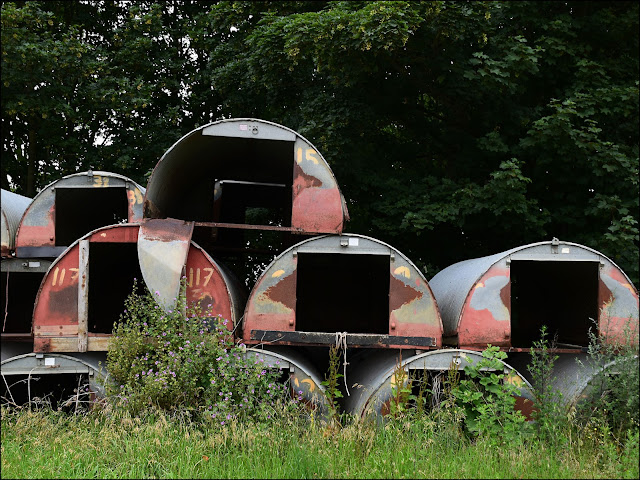 Just behind the farm are some buildings of a very different kind: these are "arks" used for outdoor pig-keeping. I rather liked the repeating shapes and mix of colours and textures - beauty in unexpected places! 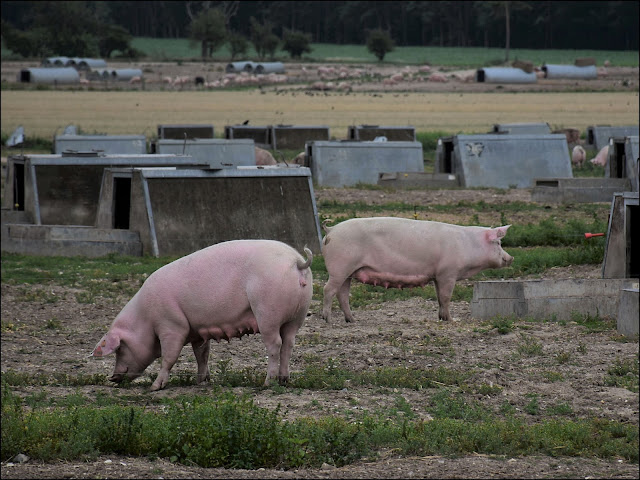 The ground here, being sandy and free-draining, is ideal for free-range pigs and there are many herds throughout Breckland. Pigs can turn any other type of ground into an endless mudhole which, though they enjoy it, is ultimately bad for their health and makes farming impossible. They also naturally enhance the fertility of this poor soil! If you peer into the distance of this and the next shot you'll see that this is a regular Pig City, but they all look incredibly healthy animals. 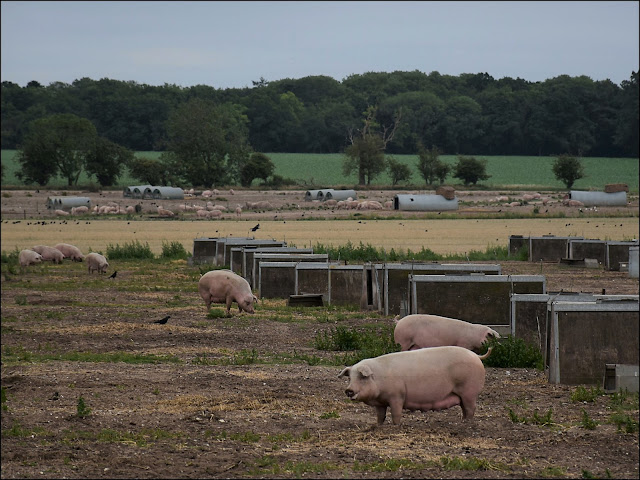 The soil here was wrecked back in the Neolithic Age as early farmers found these soils easy to work and totally exhausted them. That's the meaning of the term "Breckland" - broken or impoverished land. 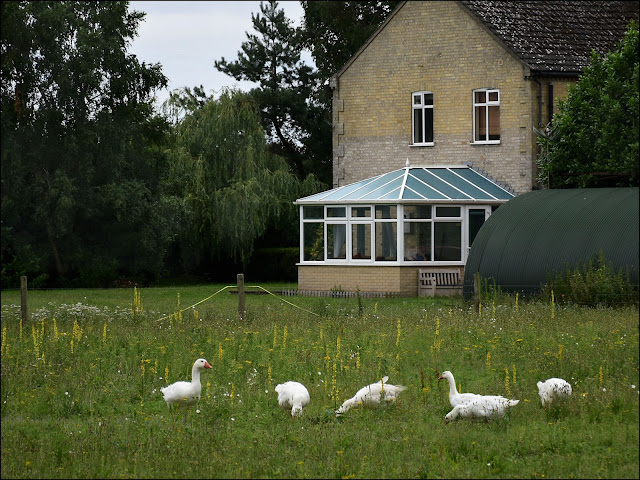 We carried on past more farms and smallholdings, making a living in every way they can. 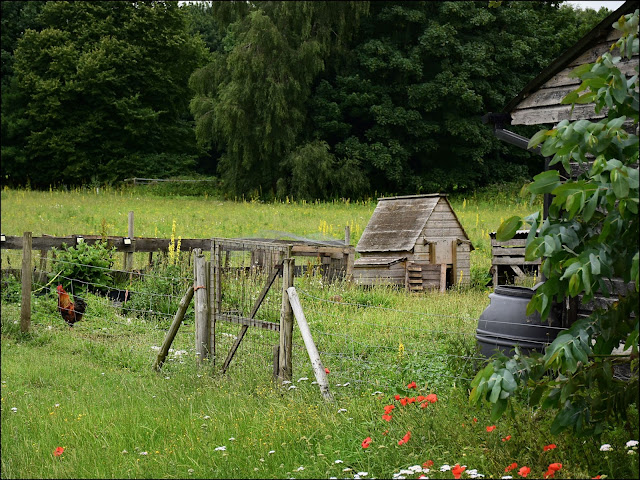 I rather like traversing this kind of countryside, probably because the village where I first saw the light of day was like this; every household seemed to have a few pigs, chickens, geese, rabbits, goats - you name it! 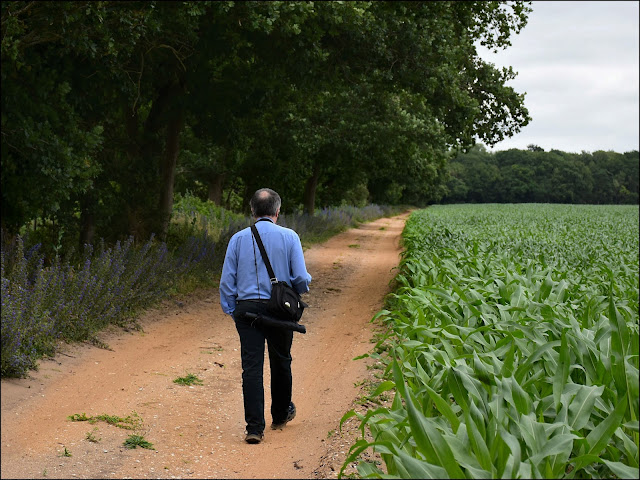 Maybe my brother Les was thinking something similar; he certainly looks lost in thought as he walks along the sandy track. On his right is what looks like a field of corn, an unusual crop here as the growing season is only just long enough for it to ripen and only then if it's a warm, dry summer. I suspect that if it fails to ripen it will be fed to pigs anyway, as pigs are perhaps the only animal that is truly omnivorous - when I worked on a farm they certainly once ate the boss's jacket, including his pipe and tobacco tin! 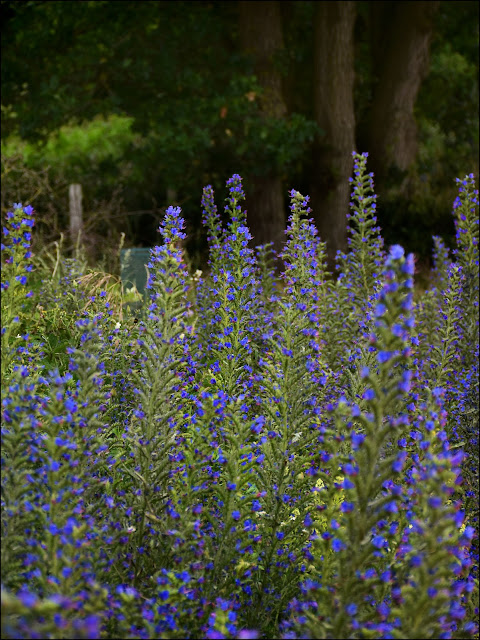 On the other side of the track is a show of the wildflower Viper's Bugloss, which is something of a speciality of the Breckland. 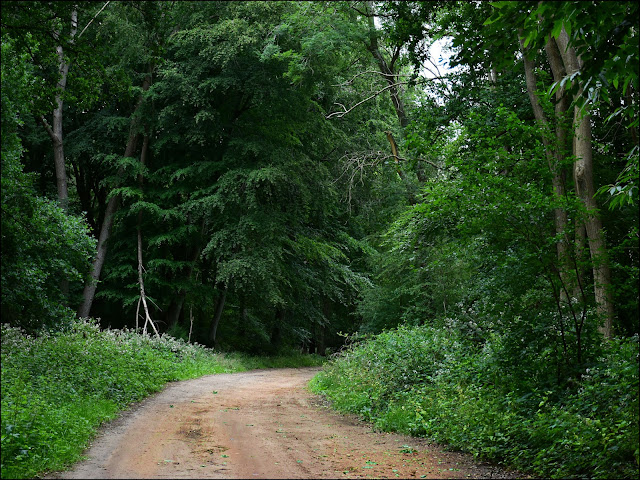 We made an early stop for a cup of hot chocolate just inside the wood, where there was a handy fallen tree trunk for a seat. A man in a pick-up truck drew up beside us and got out to see what we were doing. When he saw that we were armed only with binoculars and cameras rather than rifles we had a friendly chat during which he told us that he'd just spotted some ash trees that were being affected by ash die-back disease and also that Goshawks had been seen nesting in the wood recently. Surprisingly perhaps this land which has been exploited and abused for a few millennia and recently swamped with commercial forestry is home to several species which are rare elsewhere - Woodlarks, Stone Curlews, Nightjars and indeed the mighty Goshawk.

And there we'll leave us chatting away and sipping our hot chocolate. I'll be back with the rest of the walk in the next post.

Posted by John "By Stargoose And Hanglands" at 08:03