Today I ventured out to the Fen Edge. In other wor﻿ds, to where the flattish bit of Cambridge-shire meets the very flat bit of the county. You need the eye of a local to spot the difference between the two. I once tried to show the hills of Cambridgeshire to a man from Wales; at first he couldn't see them at all and then, when they were pointed out to him, he refused to believe that anyone would give a name to such insignificant bumps.

The village of Reach sits right at the fen edge. Despite being miles from the sea Reach and the other fen edge villages were once ports which traded across the North Sea with the Low Countries. You can still see some of the evidence today, such as the old name for a dock on this street sign -

Boats arrived at Reach via Reach Lode, a canal dating from Roman times, which connected the village to the waterways of the fens. 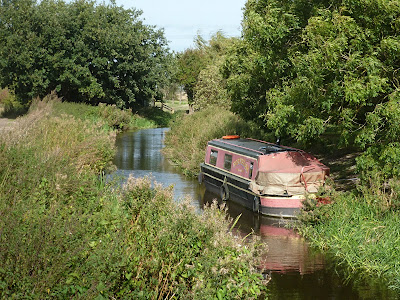 The end of Reach Lode

The importance of the village meant that it was mentioned in many old charters and that's where we meet King Len. Len Warren was a caretaker at one of the Cambridge colleges and at some time during the 1960s he took it into his head that a Royal Charter from King John in 1201 gave independence to Reach and furthermore, he claimed, he was the rightful King. In 1966 he threatened to sell his kingdom to either Russia or America when he disagreed with proposed local boundary changes. Shortly afterwards he offered pirate radio stations, which had been operating from ships in the North Sea, free berth in Reach Lode! After several other outrageous threats and demands he finally wrote to the Prime Minister and offered his Kingdom back to the Queen. I'm sure his behaviour could have landed him in jail for treason in many countries but in England everyone just sat back and chuckled. 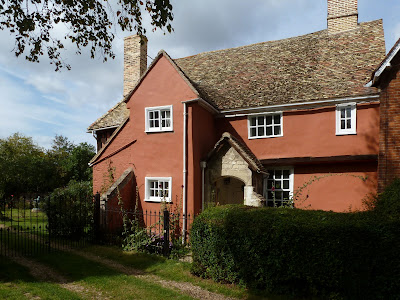 The oldest building in Reach today is the pretty cottage pictured above. It's known as White Roses and is thought to date from 1516. Surely the essence of rural England. 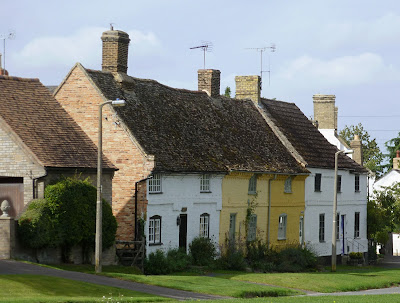 But in its day Reach was a bustling little port with seven pubs - anything to do with boats is always thirsty work! The white house at this end of the row of houses above was once the White Horse pub while the picture below shows the sign above the door of the former Bull Inn. 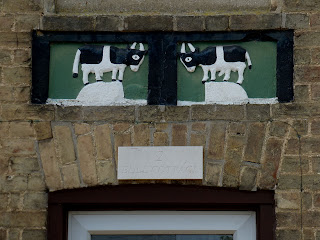 And, believe it or not, there was a pub called Black Susan Of The Evil Eye! I wouldn't have thought the name would attract many customers. 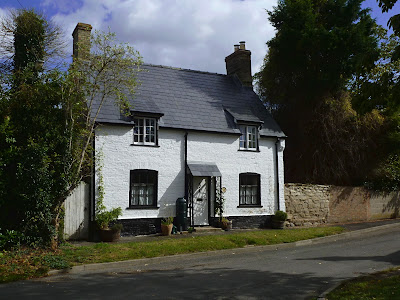 Today there's only one pub, The Dyke's End, and on a warm September day it just looked too inviting. 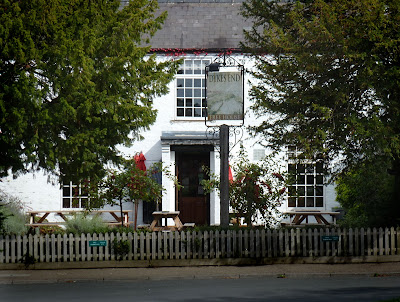 I ordered a pint of the local brew - very local indeed as the pub has its own "micro brewery". I took a seat and savoured the flavours, a great beer. The pub has been through many changes since its re-opening during the 1970s. But always it's been guided by the local community rather than the big breweries. 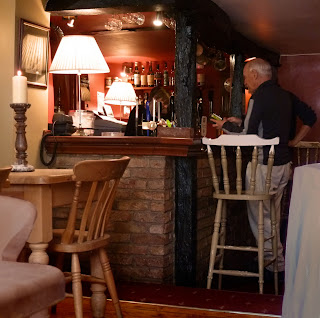 Sitting and supping my thoughts turned to another independent character from these parts, Blind Bob, who ran a pub in a nearby fen edge village for many years despite being completely blind. He knew all his locals by their footsteps and could pull a pint as well as anybody. My pint was too good to last long and I returned an empty glass to the bar and turned to leave. My eye was attracted to a plaque on the wall which commemorated a visit by Prince Charles who had commended the villagers on keeping the pub at the heart of their community.


Oh, I should explain the name of the pub. It stands at the end of Devils Dyke a great earthwork built in the late sixth- or early seventh-century AD and running for some 7.5 miles across Cambridgeshire. It is even more impressive than Fleam Dyke which I wrote about in an earlier post. Along the best preserved section there is a vertical height difference of 35 feet between the bottom of the ditch and the top of the rampart. I left Reach by the path which runs along the top of the dyke. I plan to walk  the whole length of the dyke next spring when the wildflowers are at their best. 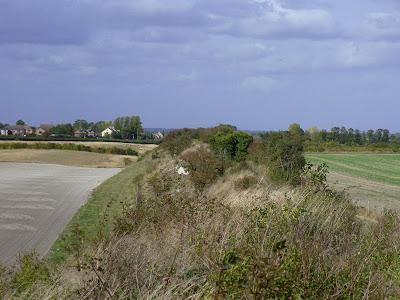 Posted by John "By Stargoose And Hanglands" at 22:17