Seeing Double In Swaffham Prior

When I recently wrote about Grantchester Church I was asked by the Wayfarin' Stranger, aka Jim, to do more posts about the history and architecture of village churches. Well, Jim, looks like your wishes are about to be answered twice over. The village of Swaffham Prior, near Cambridge, has not one but two churches standing side by side in a single churchyard. 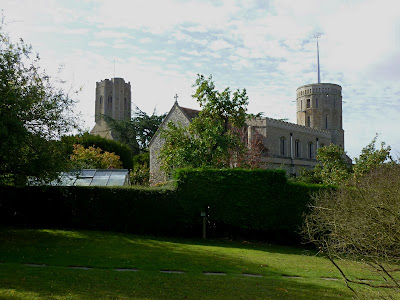 I always thought that this was a unique occurrence but a book about the local area says this was a fairly common arrangement in villages in southern England, while the leaflet I picked up in one of the churches claims that there were at least six villages in the Cambridge area where two churches once existed. Frustratingly in neither case are they more specific about the locations - a call for further investigations on my part. The situation usually occurred when there were two manors in a village, but over the centuries the high cost of maintaining two churches was normally so great that one was repaired while the other was left to fall down. 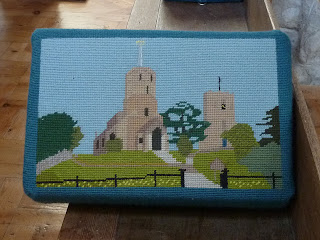 A kneeler shows the twin churches

In Swaffham Prior it seems that over the centuries the congregation transferred back and forth between the two, depending on which was in the best repair. In 1667 an Act of Parliament joined the two parishes and ordered that both churches should be maintained but it was not until the end of the 20th century that the two churches were in good condition. 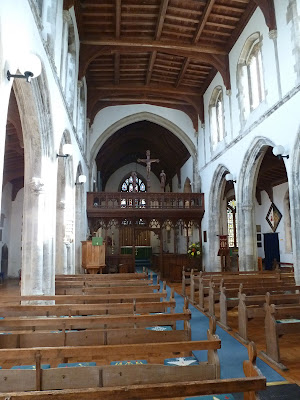 Both churches date from the 12th century and St Cyriac's may be the older of the two since it is on slightly higher ground and is more centrally placed in the churchyard. However it is St Mary's which is the one which is used today. It's a fine, well-proportioned building with a suitably rustic feel to it and there is some nice wood carving on the screen. 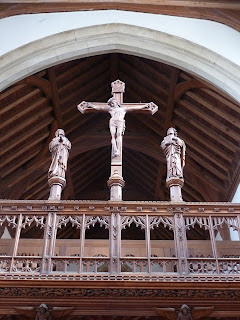 The tower is Norman and looks very ancient and sturdy with the kind of massive stonework one usually encounters in castles. 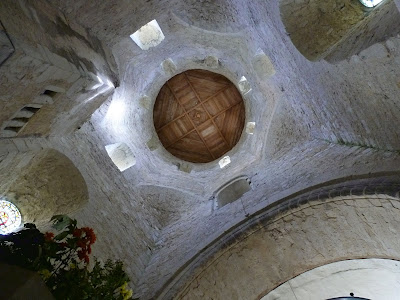 Gazing up into the mighty tower

But personally I love the atmosphere of the empty church of St Cyriac and St Julitta even though it was largely rebuilt in the 19th century. It is however in the Gothic style and has an air of timeless tranquility with the sun streaming in through the windows. In fact it is only the tower which is of any great age. 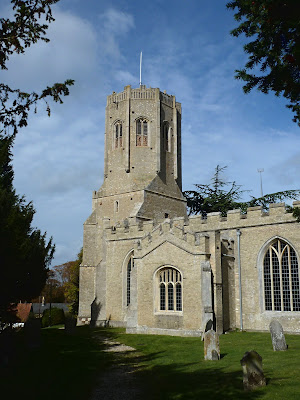 St Julitta was a Christian who lived at the time of the late Roman Empire in what is now Turkey. She fled with her three-year-old son, Cyriac, to avoid persecution but was captured, tortured and put to death. The boy was also slain. The cult of St Cyriac flourished in France and seems to have been imported  from there by the lords of the manor. There are no other churches dedicated to Cyriac in East Anglia though there are some in Cornwall. 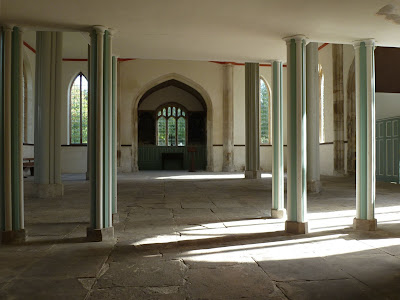 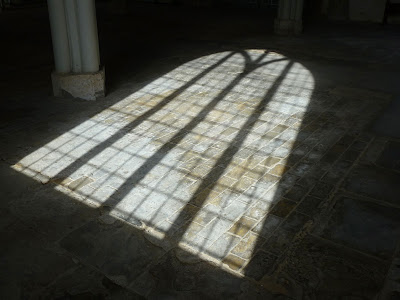 The old bier is also stored in St Cyriac's. 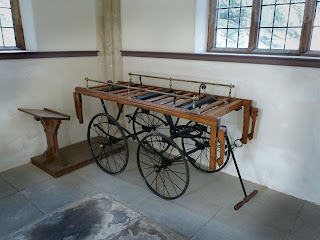 To further confuse the puzzled visitor there are also two rather similar-looking windmills either side of the road as you leave the village. 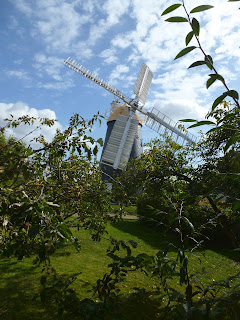 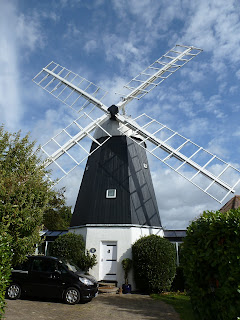 Posted by John "By Stargoose And Hanglands" at 09:16