It's The Little Things

Children have a different view of the world from grown-ups. They have little use for grand views or beautiful countryside, but have a seemingly inbuilt obsession with messy corners inhabited by creepy-crawlies and squirmy-wormies - life on a smaller and more manageable scale. The kind of thing which adults usually don't even notice. Somehow I've managed to retain some of my childish inquisitiveness; so here are a few insects and wild flowers that have entertained me recently. 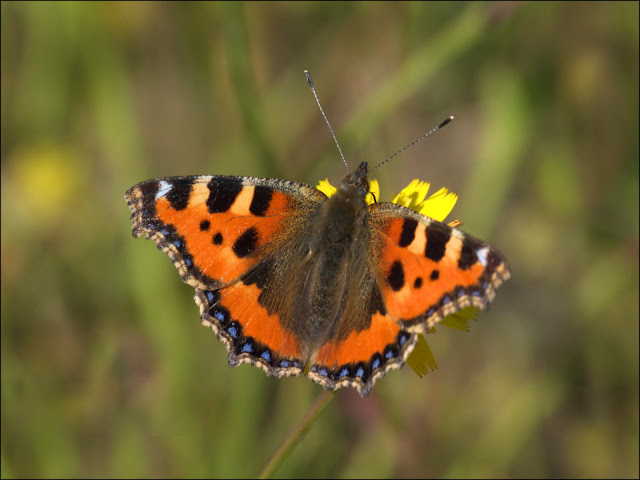 One of our more familiar garden butterflies which everyone sees at least a few times every summer. But how many of us notice the jewel-like blue crescents along the edges of the wings? They can be very territorial and will chase any other butterflies that encroach on what they consider to be their bit of the flowerbed. According to the Wildlife Trusts' website the males "court" the females "by drumming their antennae on the females hindwings". Now that's something to look out for.
Bee Orchids 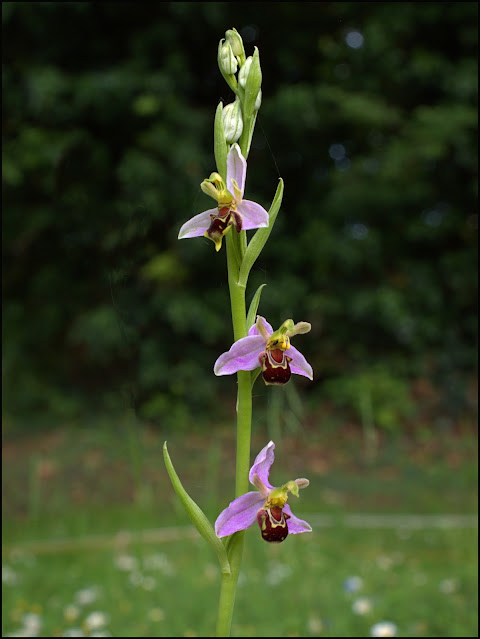 I mentioned these in a recent post, so I thought I'd better find some for you. I also mentioned how wild orchids sometimes appear in unlikely places and these are a case in point, growing on a small patch of grass in a street in the modern village of Bar Hill. The flowers are supposed to mimic bees and thus attract real bees in to pollinate them. It must work as Bee Orchids are not that rare. 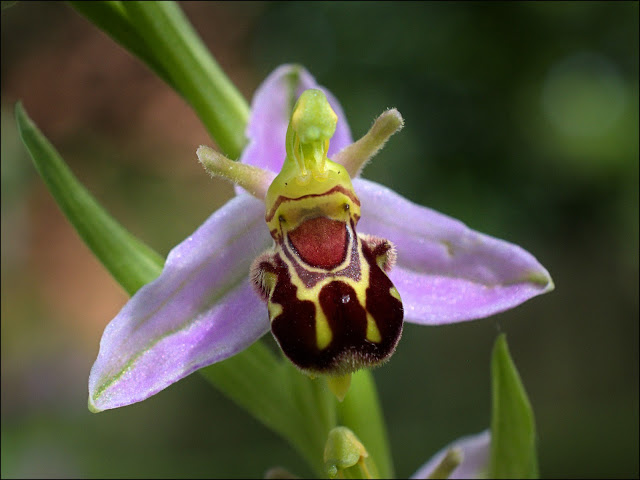 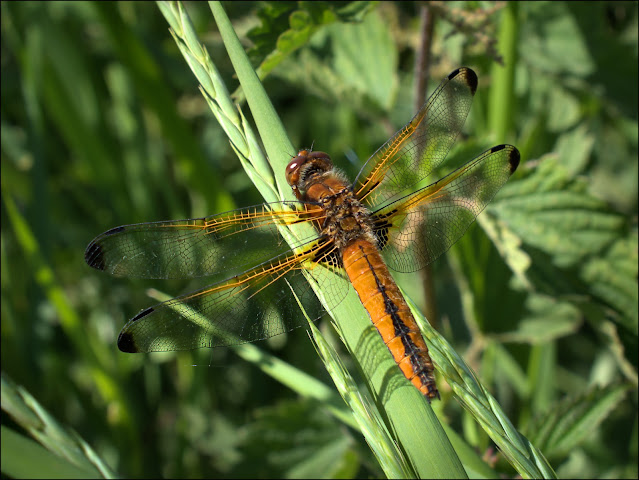 Despite the name Scarce Chasers are not that scarce - not around the many old flooded gravel pits around here anyway. That's the female in the picture above.
Yellow Wort 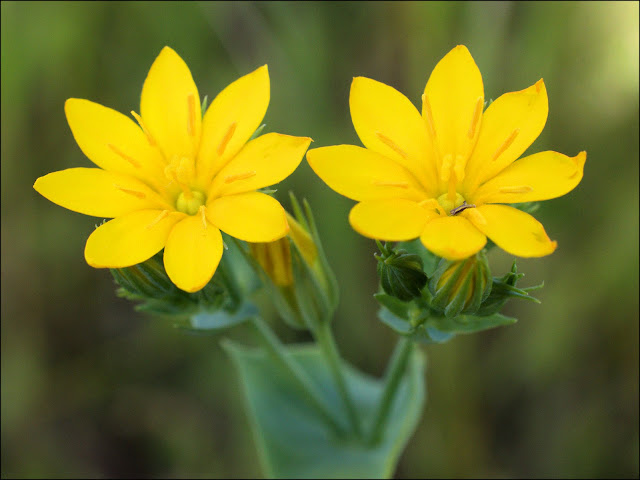 This tiny flower is a specialist of chalky soils and, while it can turn up in specially managed hay-meadows, it's just as likely to be found in abandoned quarries or, as here, on a heap of waste soil left over from excavating a small farm reservoir. Yellow Wort is actually a member of the Gentian family, but one that is very easily overlooked.
Pyramidal Orchid 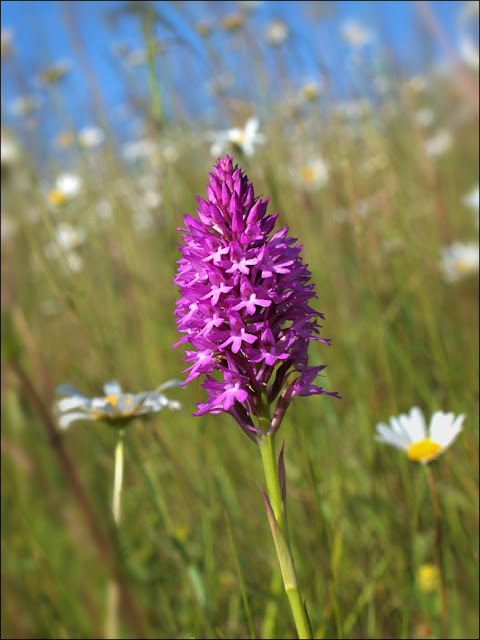 From the same heap of soil as the Yellow Wort, comes this Pyramidal Orchid. There are also Bee Orchids, Common Spotted Orchids and vast numbers of Ox-Eye Daisies on the same site. Pyramidal Orchids have occasional moments of nationwide fame when they get on the News for appearing in thousands on a particular traffic roundabout.
Cardinal Beetle 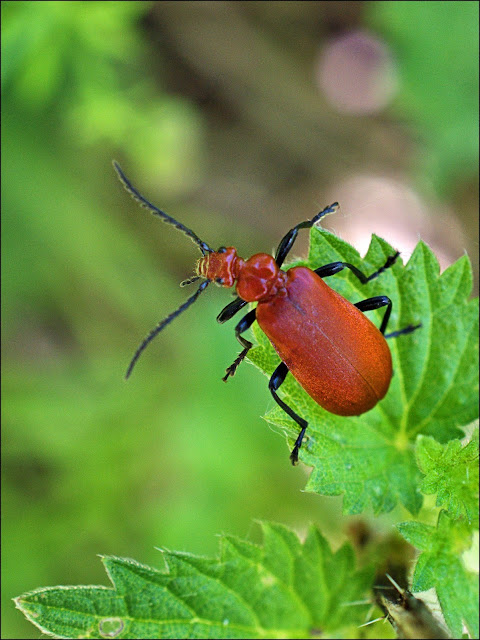 It's amazing how such a handsome little chap can be so little known. The Red-Headed Cardinal Beetle is a fairly common insect of gardens, parks and hedgerows.
Bedstraw Broomrape 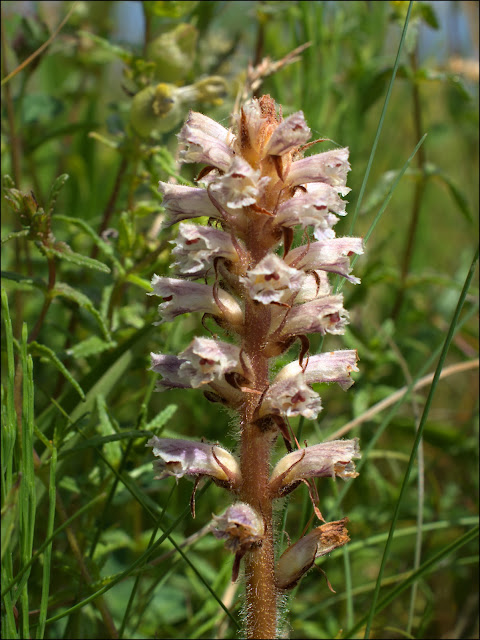 The Broomrapes are a very odd group of flowers which lack any green leaves. Instead of photosynthesising they rely on gaining their nutrients from the roots of other plants, in this case Lady's Bedstraw. This particular example was found growing on sand dunes on the North Norfolk Coast. The host plant, Lady's Bedstraw, is a fairly unspectacular yellow flower which gets its name from the fact that it was once used for stuffing hay mattresses, to which it gave a pleasant scent.
Black-Tailed Skimmer Dragonfly 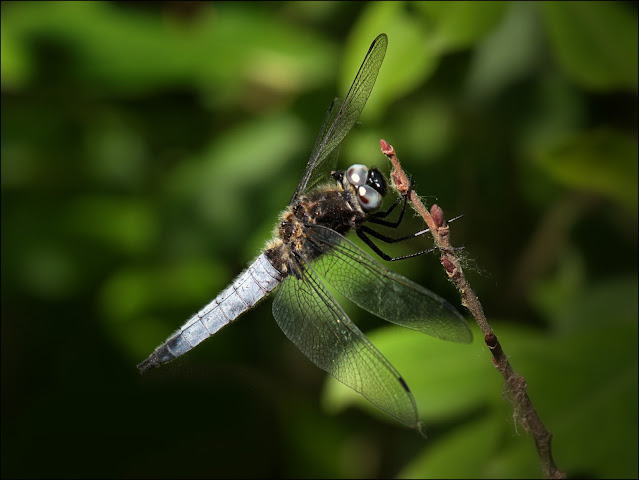 Another dragonfly which benefits greatly from the proliferation of flooded gravel pits, which have been left to serve as nature reserves in this area. If you get interested in dragonflies then you have to get used to the idea that males and females of the same species can look very different from each other. Birds often have females that are duller versions of the males, but with dragonflies no such rules apply. Here for example is the female Black-Tailed Skimmer: 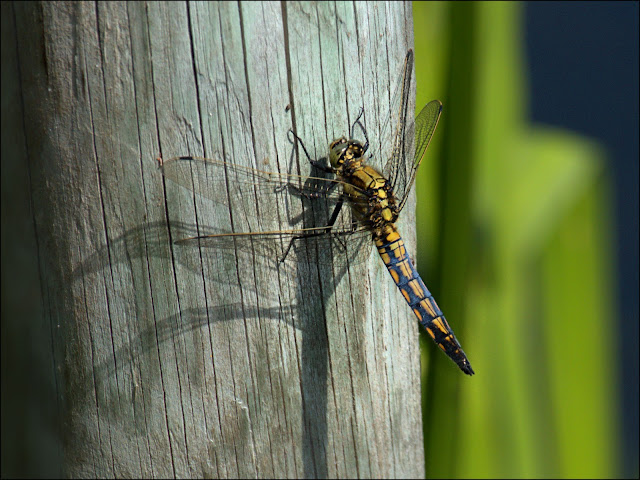 And that concludes this round up of some of the smaller things in life. But we ignore them at our peril, for it's these tiny organisms that form the foundation on which the whole of the world's ecosystems are built. Children know best.
Take care.
Posted by John "By Stargoose And Hanglands" at 09:21