In England it's often difficult to decide whether a site should be classified as of historic importance, scientific interest, recreational value or natural beauty. In such a small country things tend to get mixed up - and in this particular case you can also throw a couple of works of art and one of the country's top sporting venues into the mix. 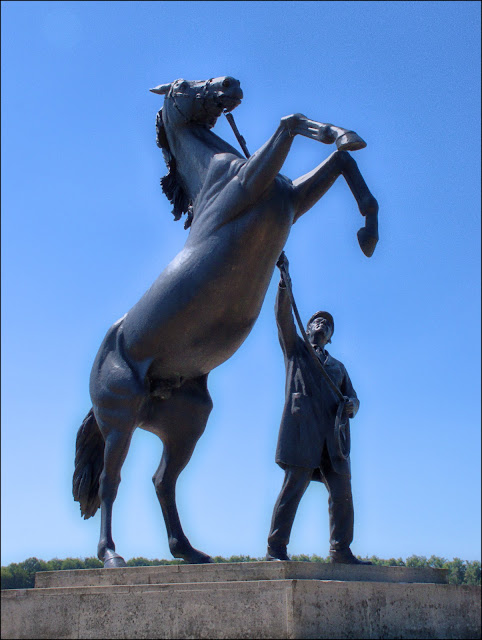 As you approach the small Suffolk town of Newmarket (human population 15,000) this mighty statue literally rears up ahead of you. It's called the Newmarket Stallion and it stands right in the middle of the road on a traffic island and announces to everyone that this is the horse-racing capital of the UK. 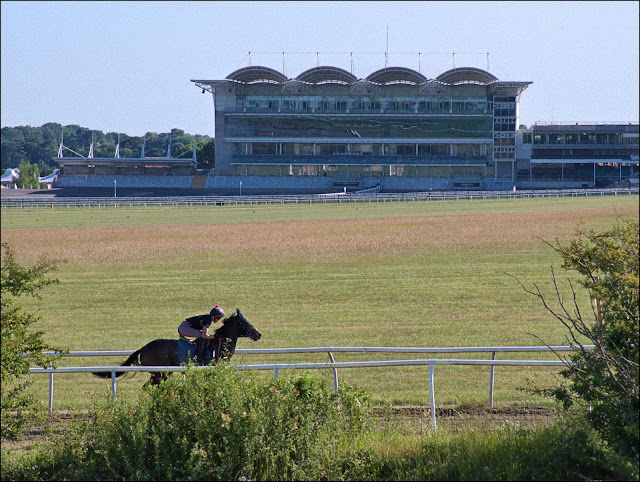 We're about to walk right through the middle of the racetrack, or more exactly we're walking between the July Course and the Rowley Mile Course. Yes, there's more than one course here at racing HQ. In fact the whole town is surrounded by everything to do with the Sport of Kings. There was no actual racing today but we saw one or two horses being exercised as we began our walk and we'll have a look for some more later this morning. 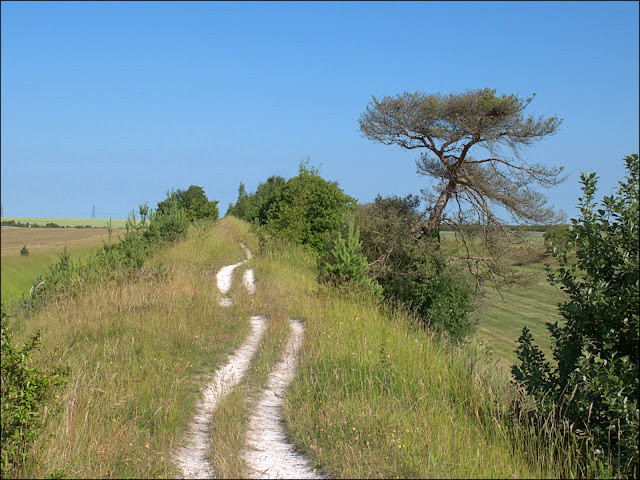 Our walk is along the top of this raised bank, giving us views out over the race courses and the surrounding countryside. This embankment looks like the kind of thing that might have once carried a railway; it's on that sort of scale - though in fact it's much, much older. There's a deep trench along the west side and the whole thing's called Devil's Dyke. 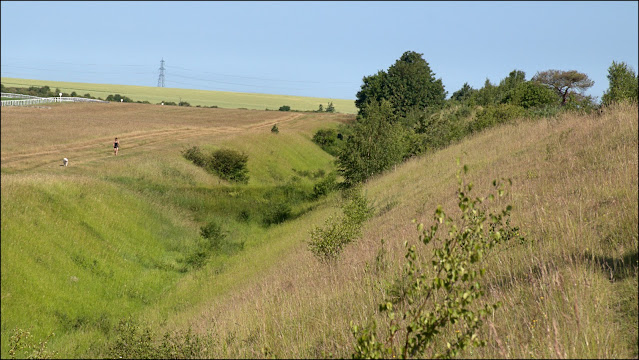 It's around seven miles (11.3 Km) in length and about 30 feet (10 metres) from the bottom of the ditch to the top of the bank. But as you walk along it becomes clear that neither figures nor photos can express the enormous effort of building such a thing. It was probably dug around the fifth or sixth century AD by Anglo-Saxons, though it's not clear whether it was to prevent an invasion, to control trade along the ancient Icknield Way or perhaps even for reasons of prestige. There's an old legend of course.... 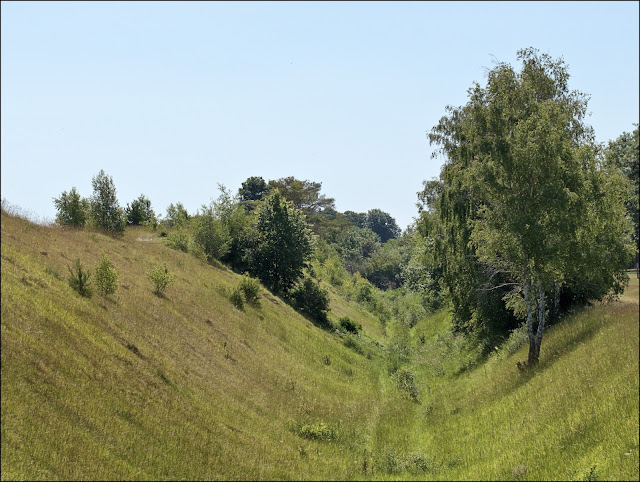 A big wedding was being held in Reach, at the northern end of the Dyke. The Devil was not invited, but decided to go anyway. He was refused entry and left for home, at high speed and in high dudgeon. His fiery tail left a deep scorch-mark across the fields, which was ever after known as Devil's Dyke. Maybe there's a grain of truth in this tale.....did two tribes unite, perhaps through marriage?...perhaps another tribe felt threatened by this new alliance and dug this defensive ditch as protection...perhaps, perhaps. One thing is clear though: the Devil, rather than dwelling in the depths of hell, once resided in the sleepy Suffolk village of Wood Ditton - that's where the Dyke ends! 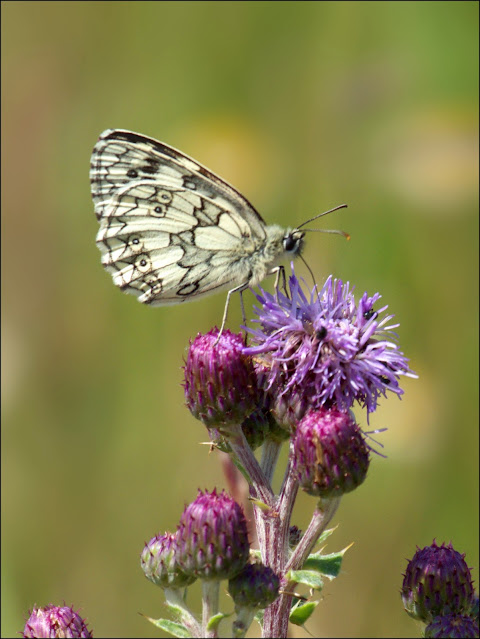 The chalky, sun-facing slopes form a rich haven for wildlife, notably chalk-loving plants and the insects associated with them. Marbled White butterflies were everywhere (though the two photos here were taken elsewhere, in much trickier conditions, the day before and, having gone to so much trouble, I'm not going to waste them!). 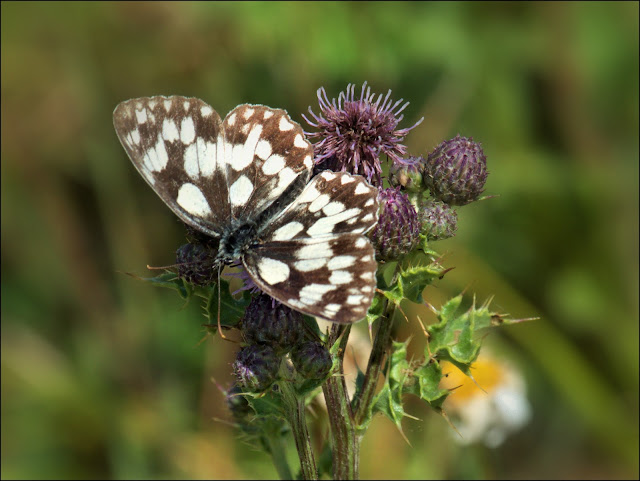 Butterflies seem to come into this world with a not-very-clear idea of what they can feed on and they dither about from flower to flower, like some absent-minded shopper, until by chance they stumble upon the right one. You want to grab them by the antennae and say "This is what you're looking for!", but all you can do is stand by, patiently or impatiently, camera in hand, and wait. 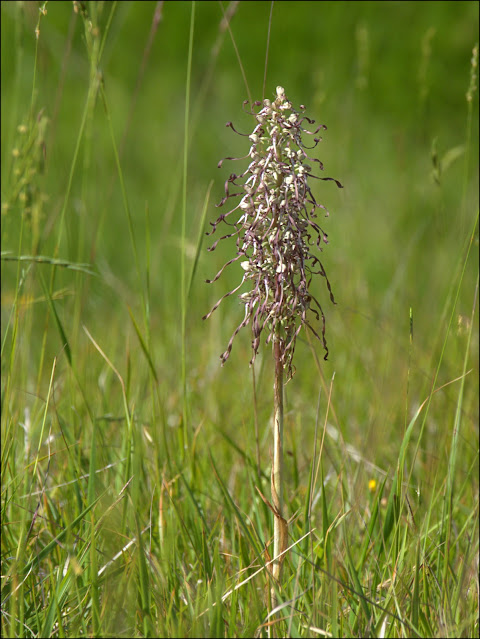 But at least we knew what we were looking for. 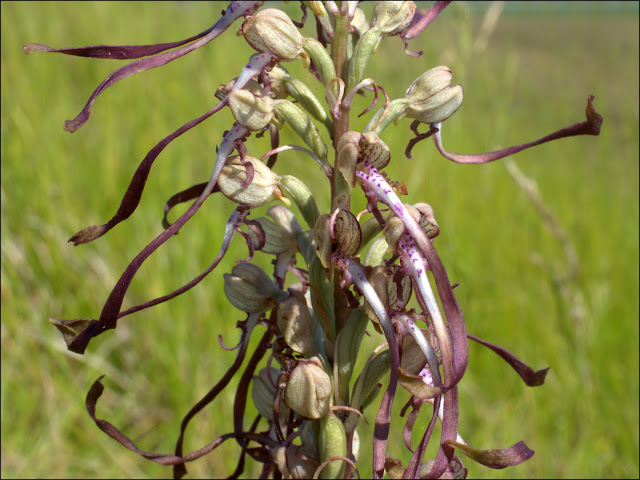 It's called a Lizard Orchid because it's said that the individual flowers resemble small lizards. You can, sort of, see the head and the tail and maybe some little short legs. 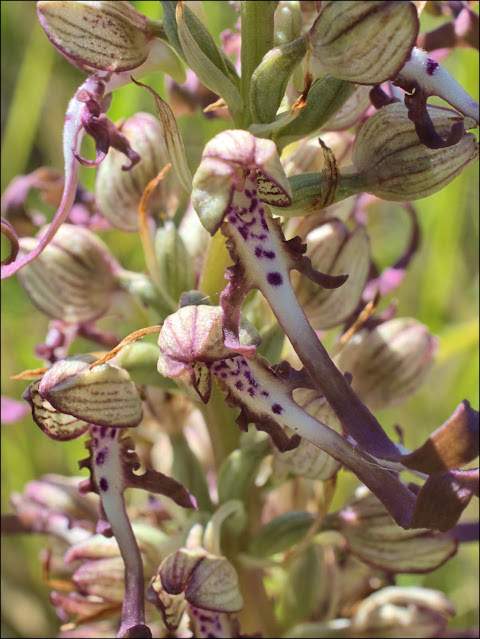 Or can you? Whatever you might think about their likeness to lizards, they are certainly some very strange flowers. And they smell of goats. 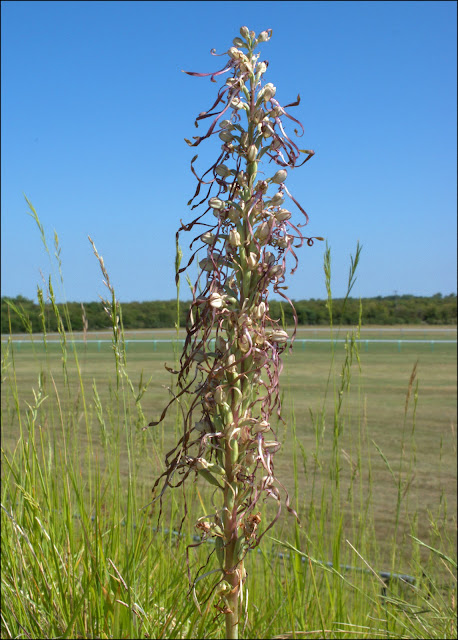 And here they stand, right beside the race track. They are quite common plants in parts of mainland Europe, but here they are confined to a few places with chalky soils. 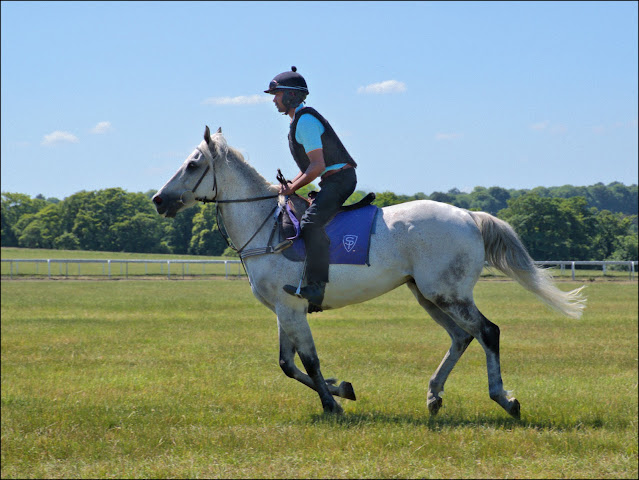 Having found our orchids there was time to quickly visit the training gallops alongside the Moulton road to see some of the thoroughbreds being put through their paces. They gallop up one way... 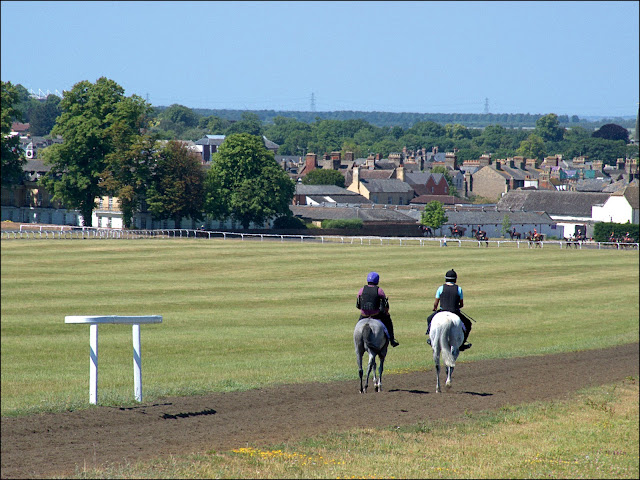 ...then dawdle back towards the town of Newmarket, something which we're about to do ourselves.
These days the Sport of Kings could easily be re-named the Sport of Sheiks, as huge amounts of Arab oil-wealth have been poured into horse racing. Even so, the Queen has always been a keen race-goer and horse-owner so it's hardly surprising that the town should want a statue of Her Majesty... 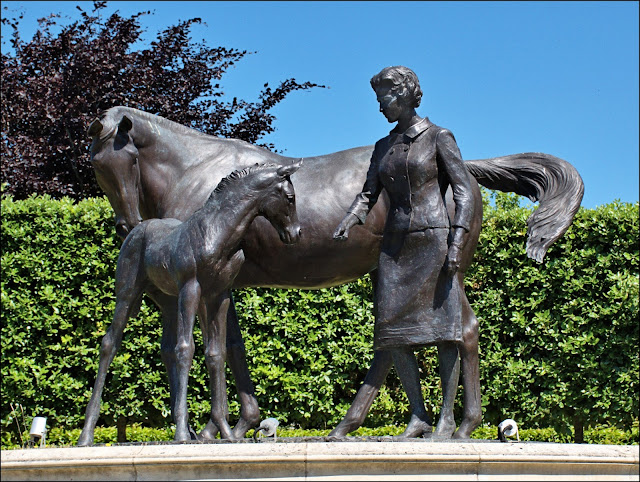 Of course, this is Newmarket, so even the Queen has to share the plinth with a racehorse and its foal.
Take care.
,
Posted by John "By Stargoose And Hanglands" at 07:05