A Day In Sunny Hunny

Every year, at about this time, the people of land-locked Cambridgeshire are seized by a sudden urge to visit the coast. Hunstanton is the nearest and most obvious place to go. From early forays with buckets and spades, to teenage adventures sleeping in beach huts, to later excursions taking elderly parents out for the day, right through to recent visits in search of shorebirds and seabirds - most of them came up for discussion during the course of a recent visit with my brother to "Sunny Hunny", as Hunstanton is less formally known. 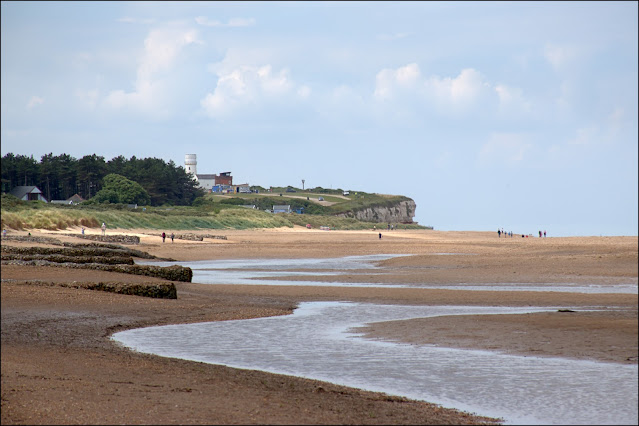 St Edmund's Point
St Edmund's point is at the north end of Hunstanton's famous cliffs. There are miles of flat sands to explore, though our usual walk eastwards has been somewhat hampered and restricted by recent changes in the water channel, which drains out the last dregs of the tide. 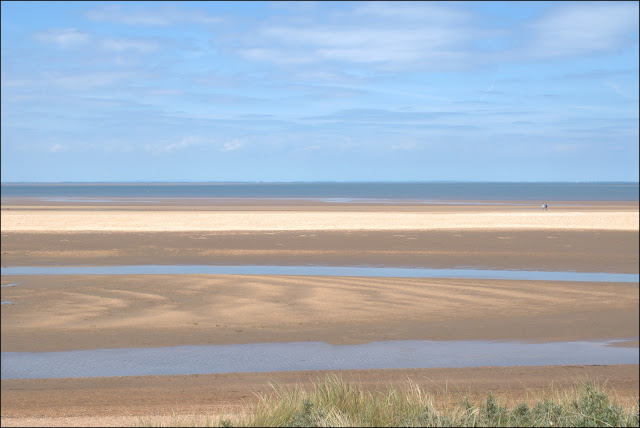 Hunst'on Beach
Despite there being a clear line of cliffs at Hunstanton, just a little further east the division of land and sea becomes very indistinct. Twice a day the sea comes in and covers everything, then it withdraws in a half-hearted sort of way leaving pools and channels all over the beach and sandbanks way out to sea. Over The Dunes And On To The Beach or
"Look at the lully blue sky!"
"Look at the lully (lovely) blue sky!" was first excitedly uttered by my mum's great friend Agnes on an early bus-excursion to the seaside - it's been a catchphrase in the family ever since and must have been repeated every time we've been here. 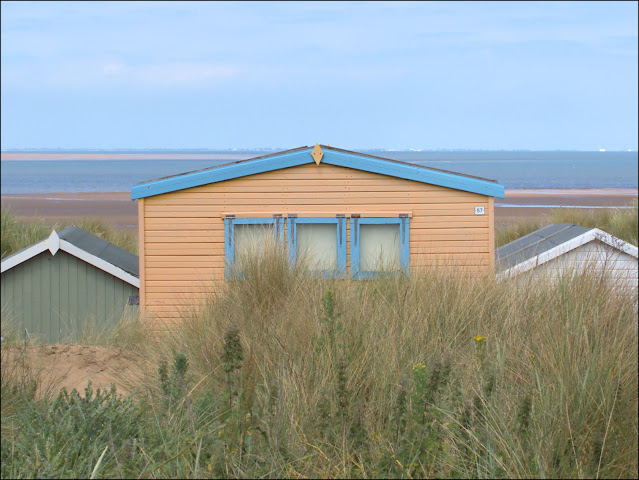 Beach Colours
The beach huts here are more subtly painted than elsewhere (though there is one pink and purple one among them), but none more tastefully than the sand and sky blue one pictured here. 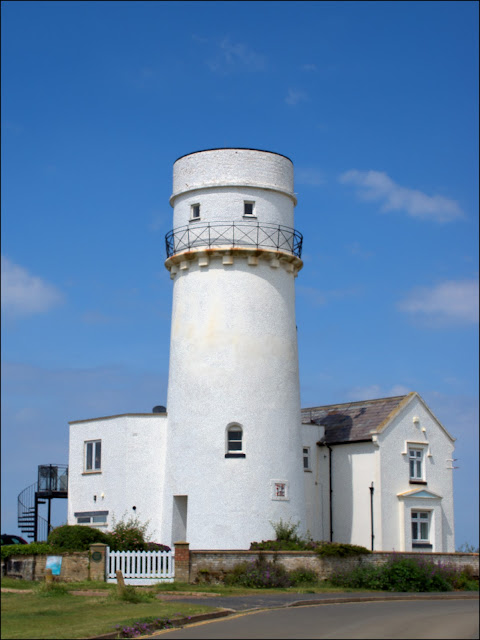 The Lighthouse
The lighthouse has long since lost its light and is now used as holiday accommodation. It dates from 1840, though a wooden lighthouse stood on the same spot before that. Lights may well have been displayed from the nearby St Edmund's Chapel in the more distant past. This most recent lighthouse was still known as "Chapel Light" in its early days. 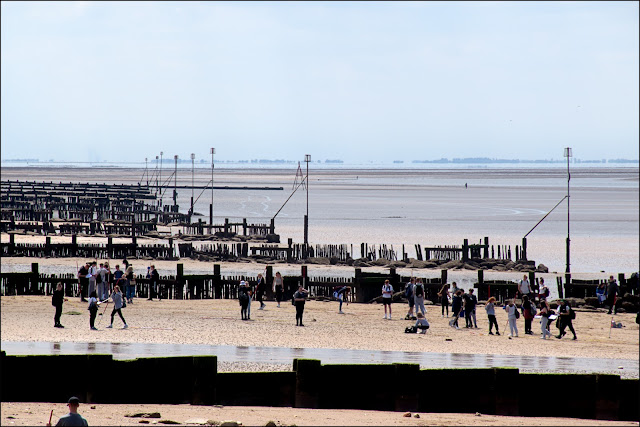 The South Beach
The South Beach can be reached by descending a short flight of steps from the amusements, fish and chip shops and candy-floss stalls on the promenade. Later in summer it will be crowded with families with small children, but for now it's the site for school students involved in a surveying exercise. 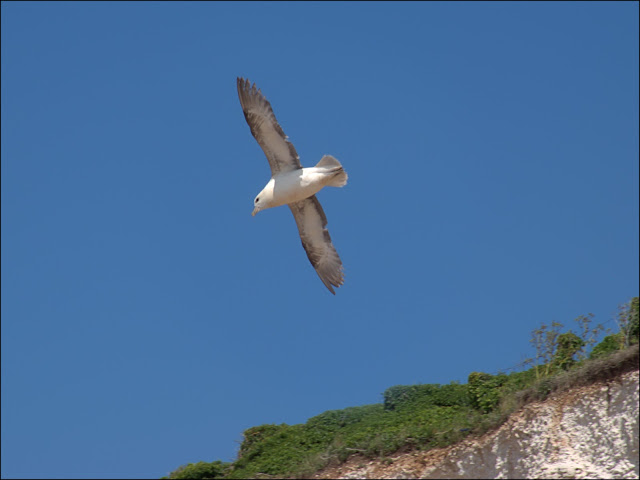 Fulmar heading north
That "seagull" is not a "seagull" at all. It's a Fulmar, which is more closely related to albatrosses than gulls. 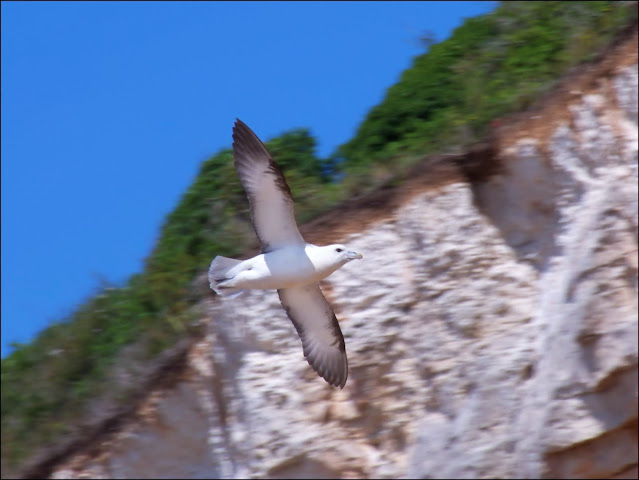 Fulmar heading south
For centuries they were confined to the islands of St Kilda, far out in the Atlantic, but spread into the rest of Scotland in the nineteenth century and into England by 1930. It took them till the 1960s to reach these cliffs. 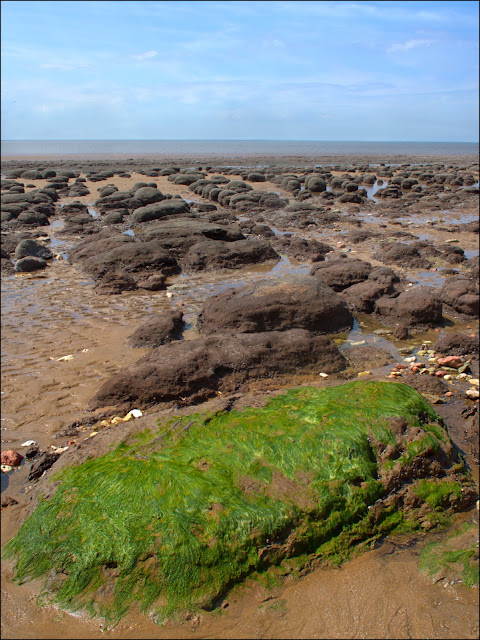 Wave-Cut Bench
The cliff-line at Hunstanton recedes every winter as storm waves undercut the cliffs and rock topples down. The "wave-cut bench" is the geologist's term for the rock that's left once the seas have done their work and the cliffs have retreated further inland. The flat rocks that remain really do make comfortable benches for the weary wanderer. 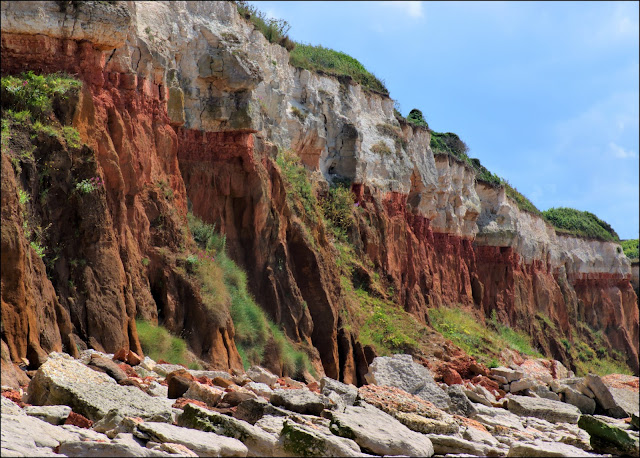 Coloured Cliffs
The red colouration is entirely due to iron impurities in the rock. 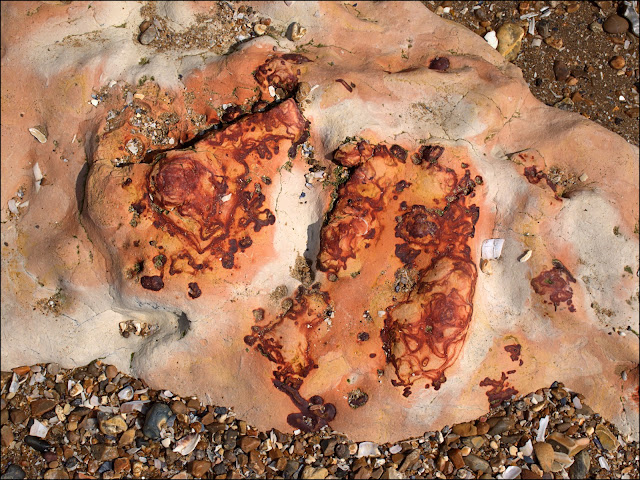 It's Written In Stone
Where the red and white rocks meet you sometimes get some interesting patterns. I remember being fascinated by these rocks when I was a little boy - and I still find them interesting today. 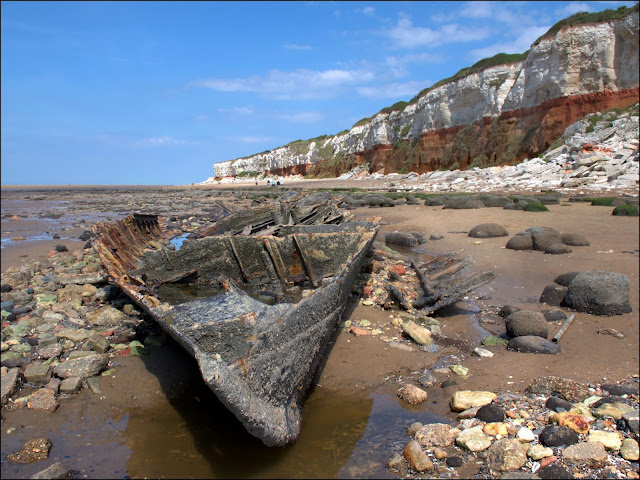 The Wreck Of The Sheraton
The S T Sheraton was built as a steam-powered trawler, but served in both world wars as a patrol vessel. At the end of WWII it was moored offshore here to serve as a target for trainee bomber pilots. In 1947 she broke free from her moorings during a storm and ran aground beneath Hunstanton cliffs, where she remains to this day. 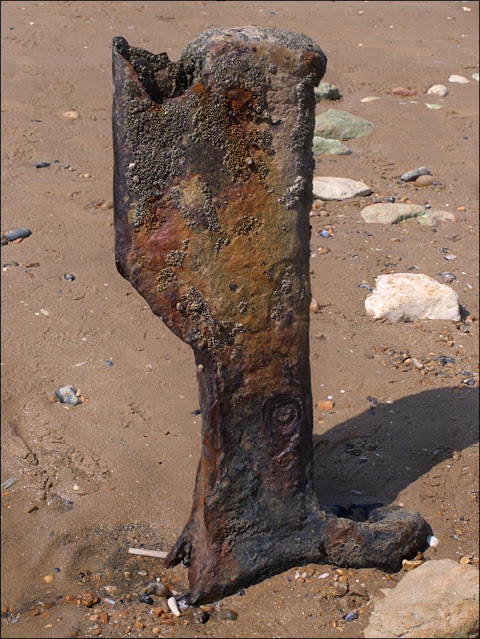 The Sea As Sculptor
A small part of the Sheraton forms this unintentional free-standing piece. I really should have spent more time photographing the colours and textures of the wreck's rusted carcass. But that will have to wait for another day in Sunny Hunny.

Posted by John "By Stargoose And Hanglands" at 06:46