In England, as well as roads linking adjacent villages, there'll almost always be a few winding, half-forgotten paths running through the deepest green countryside. It's surely no coincidence that the mapmakers have chosen to show these paths pecked out in green on our most detailed maps. 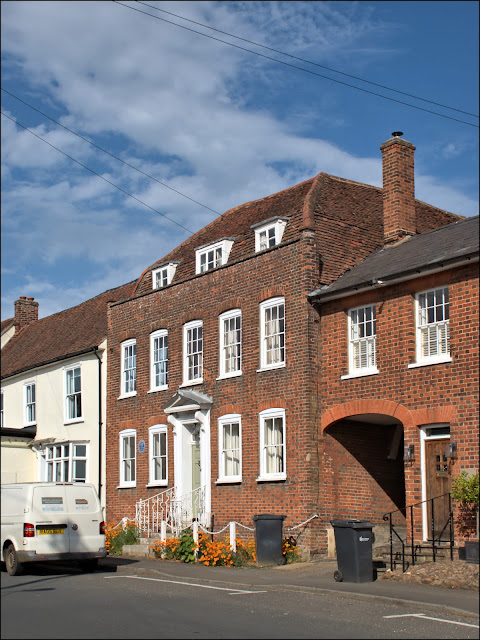 We'll start our meanderings in the village of Great Bardfield in Essex. By pure chance we found ourselves parked opposite "The Brick House" which was home, from the 1930's till 1970 to the artist, Edward Bawden. For a time during the 40's and 50's the village became the centre of a gathering of artists known as the Great Bardfield Group. Perhaps the best-known member of them, Eric Ravilious, also lodged at the Brick House during part of that time. 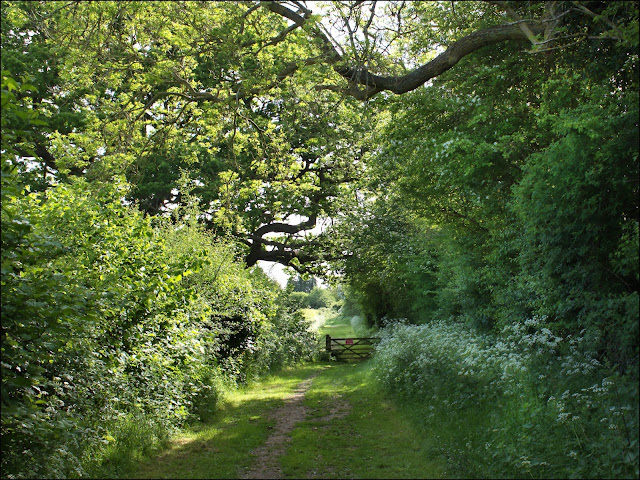 But we're here to thread our way through some of the countryside that inspired these artists. After a few slightly overgrown paths by field-edge and streamside we found ourselves on a generous grassy track that looks as though it must once led to somewhere of local importance. 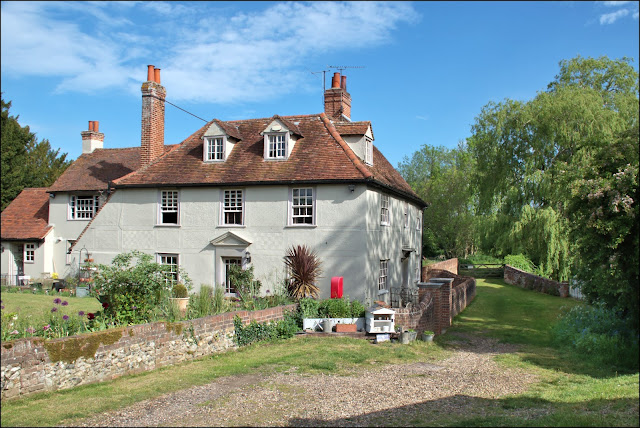 At the end of the lane we came to a stylish old house with honey for sale. And sneaking down beside it was a track leading to a little bridge over the River Pant. 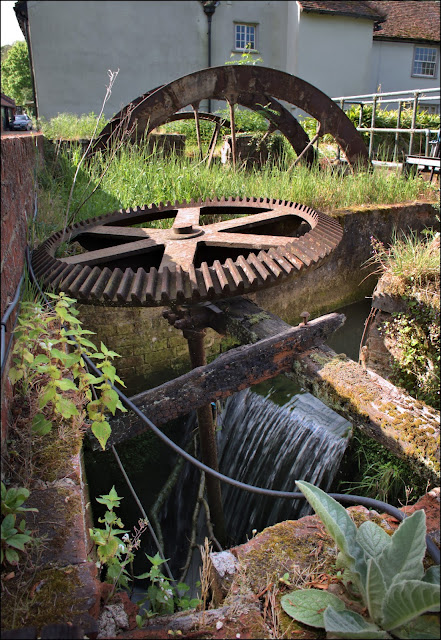 Right behind the house were the remains of an old watermill. Yes, this would have been the house of the miller, once a man of some importance in the local community. There was good money to be made if you owned a watermill or windmill to grind their wheat or barley; though that wealth came at a price, for many people thought they were being cheated, however honest the miller might be. 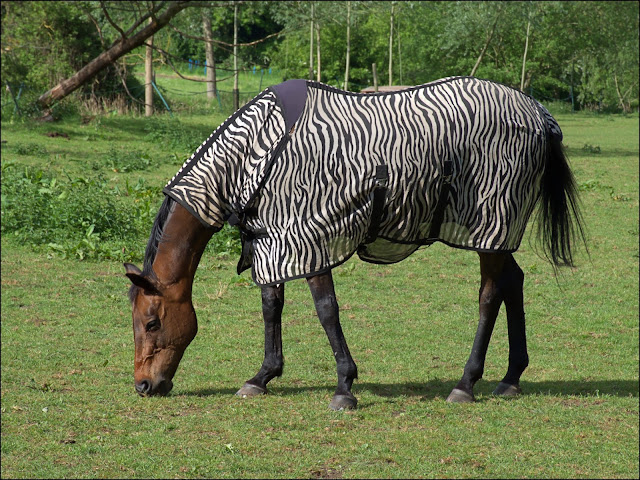 An unexpected sighting of a zebra! 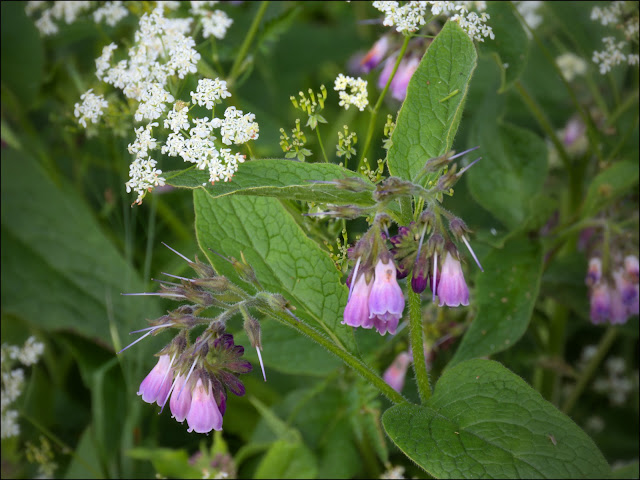 The path doggedly made its way through thick vegetation with quite a lot of Comfrey growing amongst the Cow Parsley. 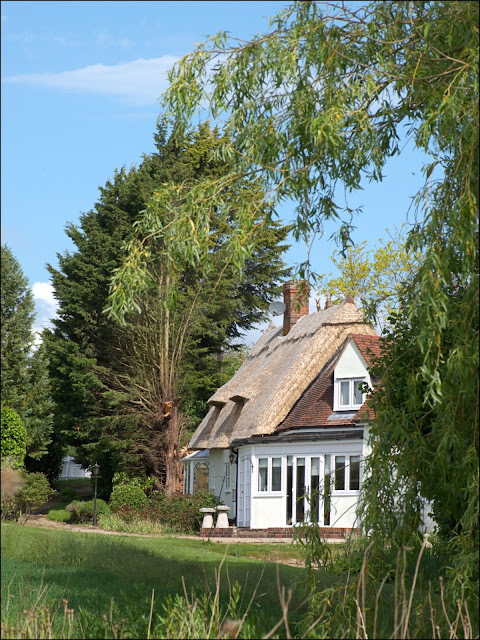 We passed just a few houses as we followed the tiny Finchingfield Brook on our way to the village of Finchingfield itself. The thatched cottage above has been extended to form a luxurious country retreat for someone with a lot more money than I have. There are two mushroom-shaped "staddle-stones" standing outside. They once had the vital job of lifting the floor of a granary away from the attentions of mice and rats - now they reduced to being mere decorations. 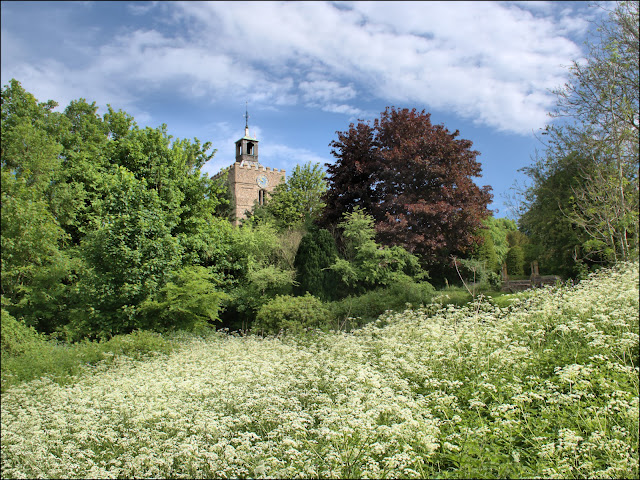 The map's green line led us behind Finchingfield Church as we came to the village. I'll show you more pictures of the pretty villages of Great Bardfield and Finchingfield next time, but for now lets continue our walk. 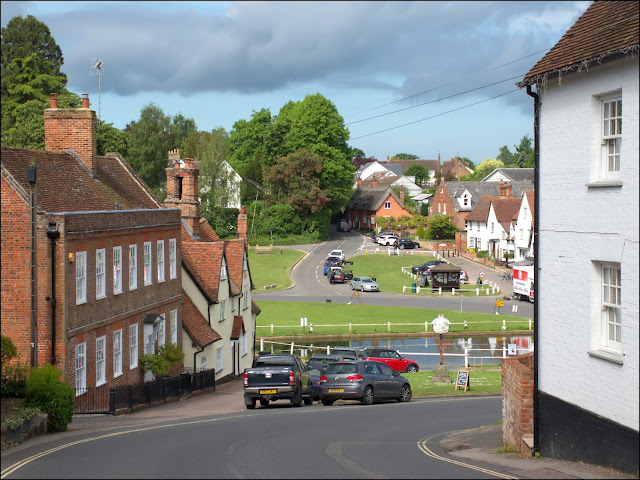 We followed streets lined with ancient houses down to the village green and duckpond. This can be an exceedingly busy and touristy place on fine weekends in midsummer; it was plenty busy enough at ten o'clock on a Tuesday morning. 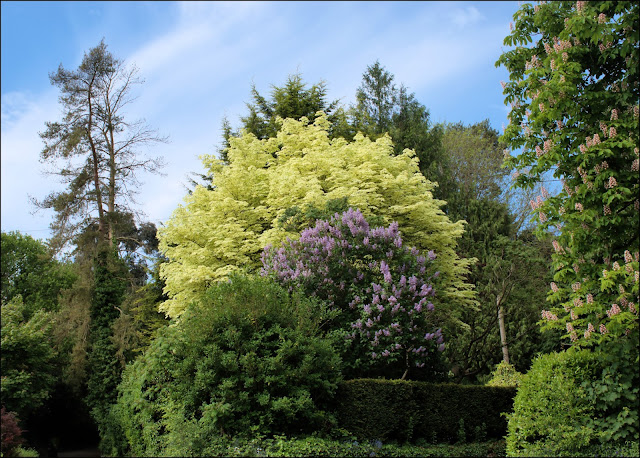 As we left the village our eyes were attracted to this handsome grouping of trees. 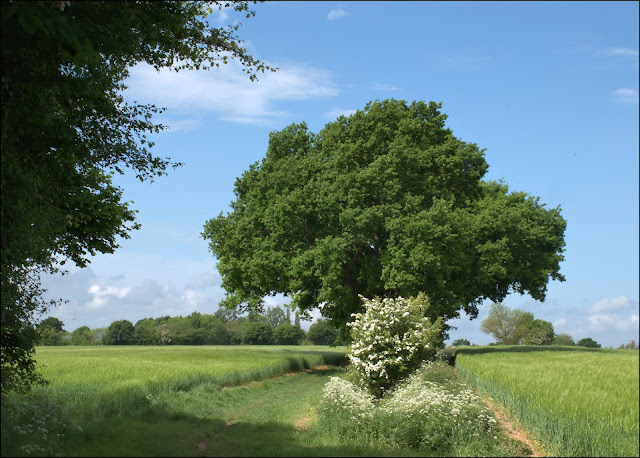 We're going back by a different, more circuitous, path. Unusually for a footpath this one has a name - Winsey Chase - and I'm pretty certain that it was once a road leading to a farm. 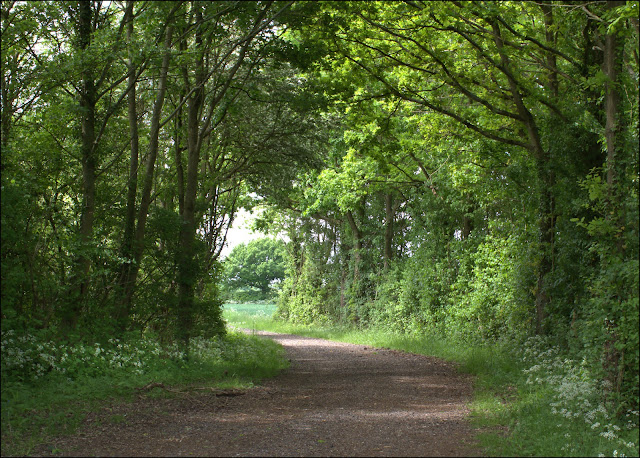 This wooded area, where the track makes a double bend, is, I think, where the road passed through the farmyard and in the trees on the right there are the remains of an old moat, which perhaps surrounded the farmhouse. I couldn't see the moat for all the trees and undergrowth, but it's right there on the map. The old road led on from there to Beslyn's Farm, which I know was a scene painted by one of the Great Bardfield artists. 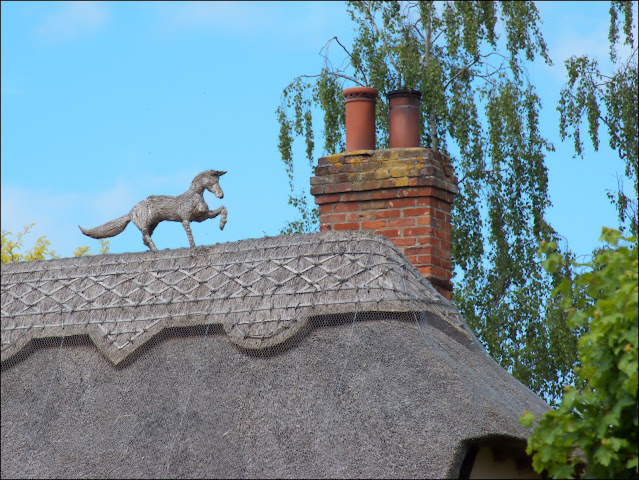 Artistry of a different kind was displayed on the ridgeline of the Beslyn's Cottage. 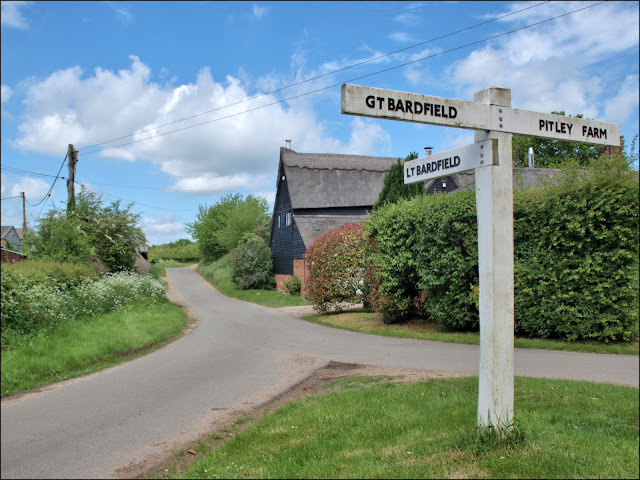 Maybe I had one of Eric Ravilious's paintings in the back of my mind when I took the picture above; a signpost, overhead wires and a road junction (but not this one) certainly feature in one of his more famous works, though he probably balanced and finessed his composition with more care than I did. 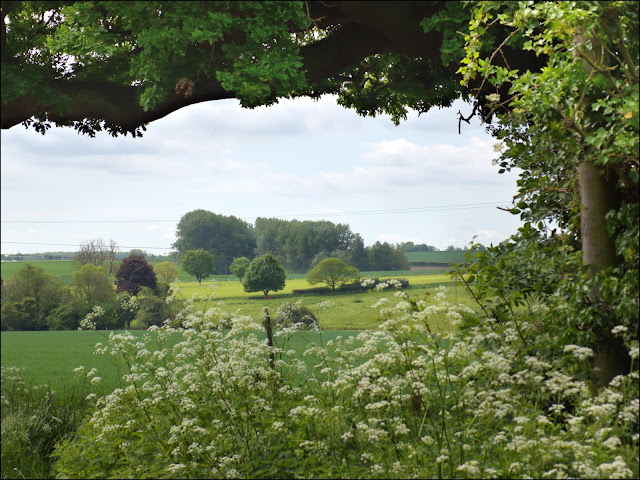 On we went, through every shade of green in an artist's palette, as we gradually approached the little River Pant one more. 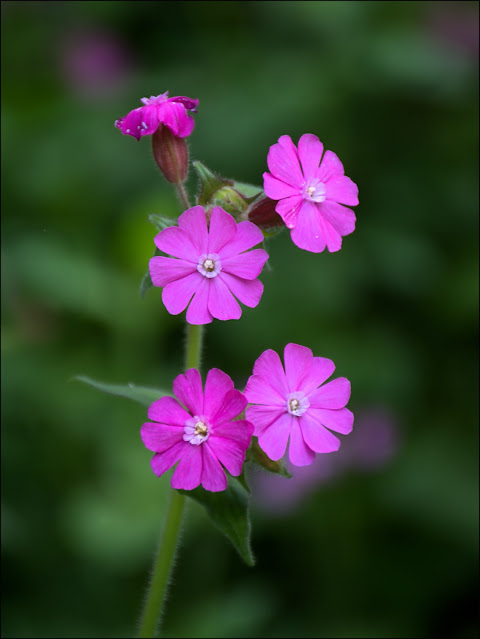 Red Campion sang out from the shadows. It's a common enough wildflower, but one that always attracts the eye at this time of year. 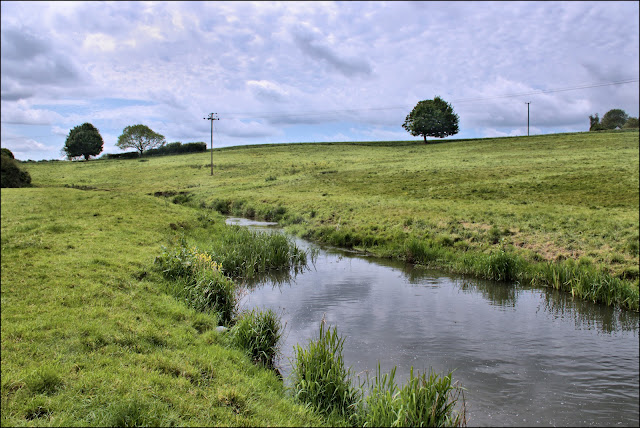 And here's the Pant itself, which we can follow almost all the way back to Great Bardfield. 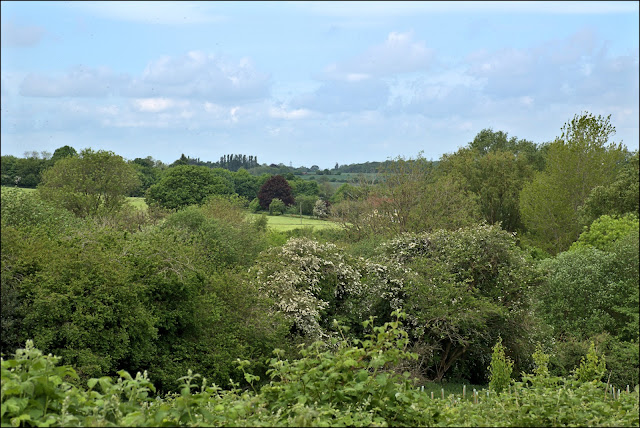 There's time to pause for a final time and glance back on the way we've come. It seems unlikely, if  not impossible, that a path could slip and sidestep its way through all that rampant greenery and lead unfalteringly to its intended destination. But here we are, back in Great Bardfield, right in front of the Brick House with its colourful display of flowers. 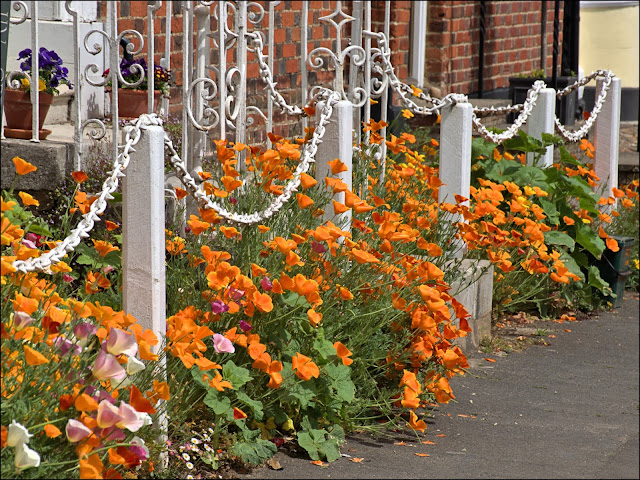 Take care.
Posted by John "By Stargoose And Hanglands" at 07:02