Sometimes I wish there was an ancient or more poetic name for some of the places I visit, but in this case there isn't; so "River Little Ouse" (pronounced the same as "ooze") it has to be. It's a frequent companion on our wanderings as it winds its way through Breckland and the Thetford Forest, though on a fine spring day this stretch alongside Lakenheath Fen is as choice as any. Mind you, it can be a bleak place in mid-winter. 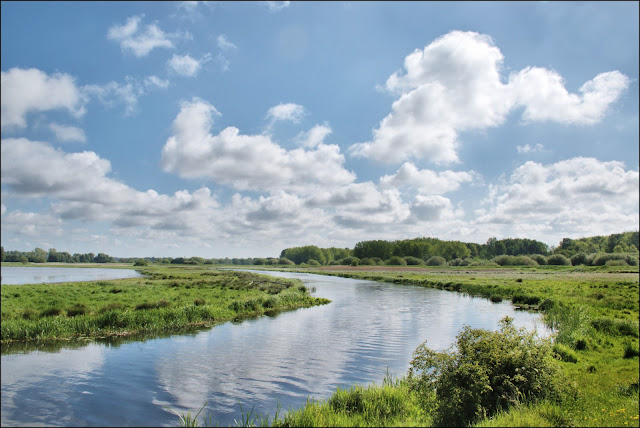 The valley, as it approaches the Fens, is very wide and very flat, with the river inching along almost imperceptibly. The floodbanks, on either side of the river are set back at a distance to allow the riverside meadows to flood in times of heavy rainfall. These washes, as the flooded lands are known, look like deep lakes till you spot wading birds out in the middle of them with the water barely up to their knees.

It's easy to spend all your time scanning the floodplains without paying much regard to the river itself. That would be a mistake. 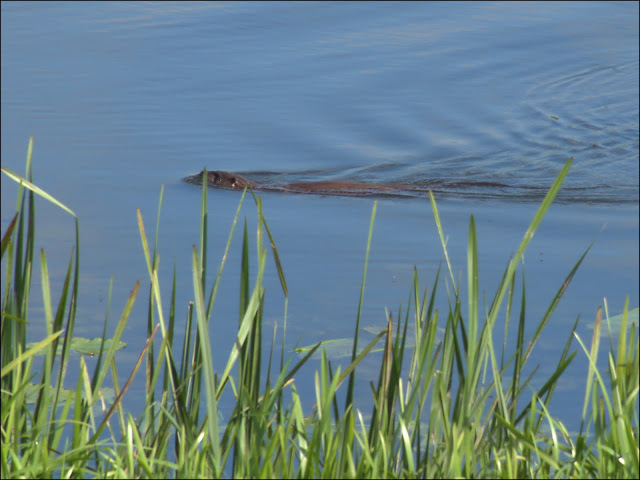 That's not a log in the water but an otter, a bit of a speciality of this little stream. We spotted two of these secretive animals and apparently they have a family of young cubs, so we were told. They are mostly nocturnal so we were lucky to see these around nine in the morning. 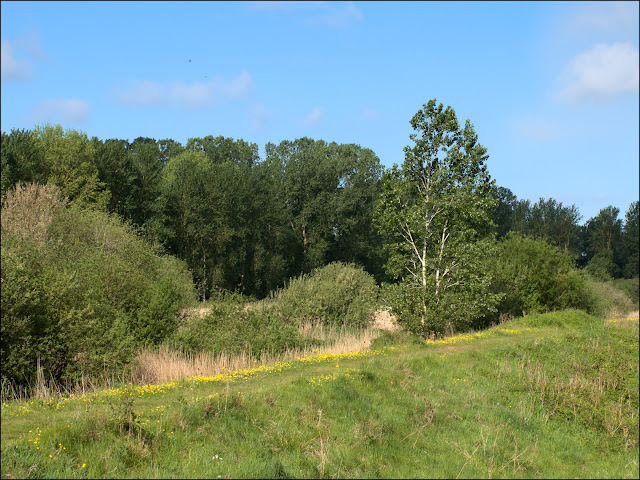 The path runs along the top of the floodbank and at this time of year it's lined with bright yellow buttercups. 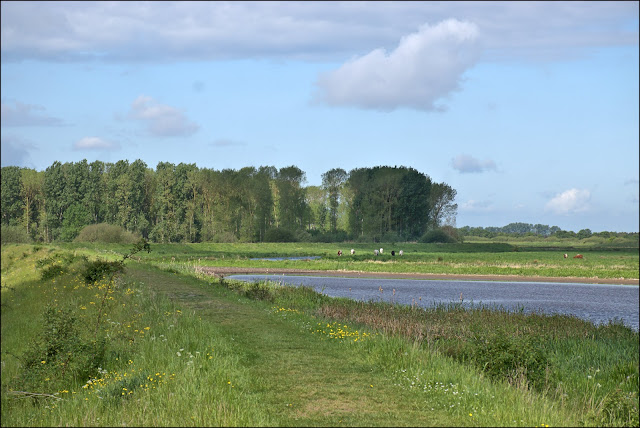 Cows, and the occasional bull, are grazed along here, though they generally stay on the lush grassland down by the river and rarely bother to climb up to the footpath. 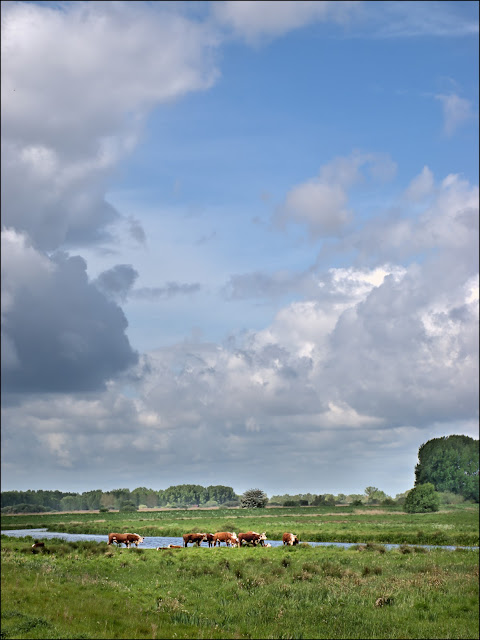 Bully's on the extreme left of the group, if you're interested. With all those wives he's not bothered about you. 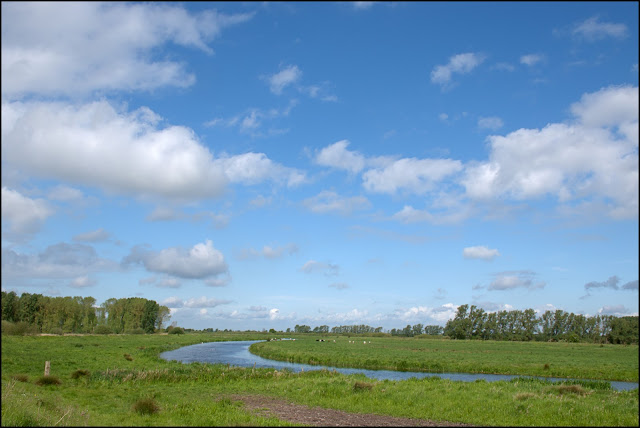 The relative smallness of the river, compared to its huge valley, was first noticed by Rev Osmond Fisher over 150 years ago. He convinced himself (but nobody else) that this was something to do with glaciation. Recently it's been shown that the sandy soil of Breckland was deposited in a large lake, formed by meltwater from the ice sheets which spread as far south as this at the end of the last Ice Age. The water from the lake eventually escaped down this valley, making it much larger as it went. 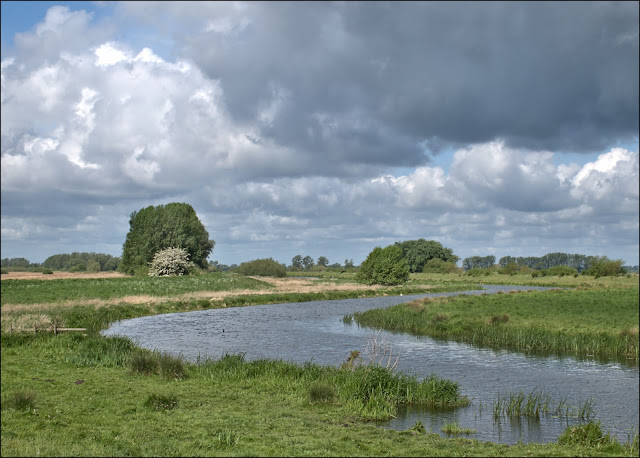 The skies were not as threatening as they look in the above photo. However it's time to turn away from the Little Ouse and make our way back through the reedbeds of Lakenheath Fen. 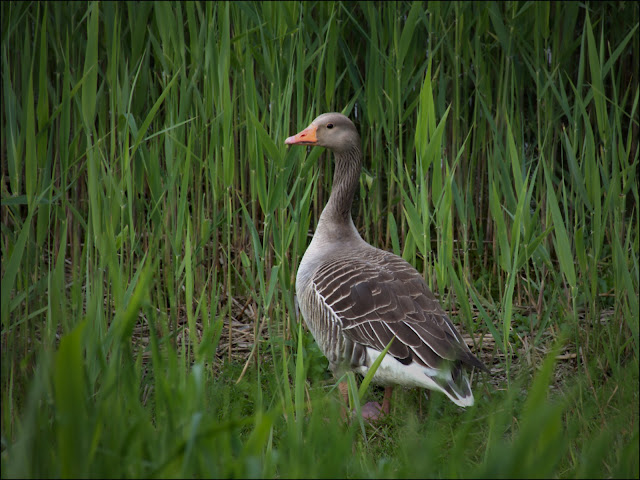 A Greylag Goose had some goslings hidden away in the thick green reeds. 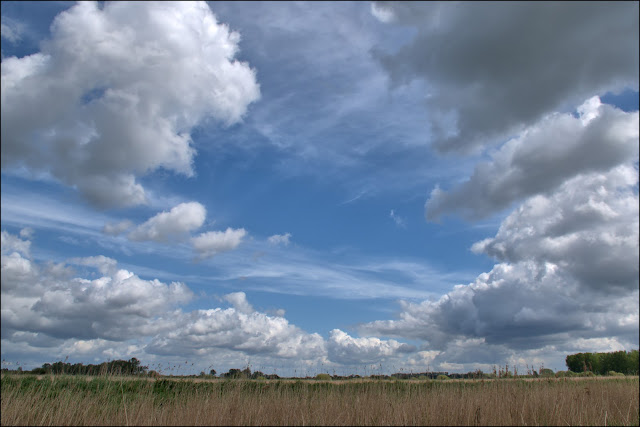 The wide skies continued to entertain as we wound our way back. 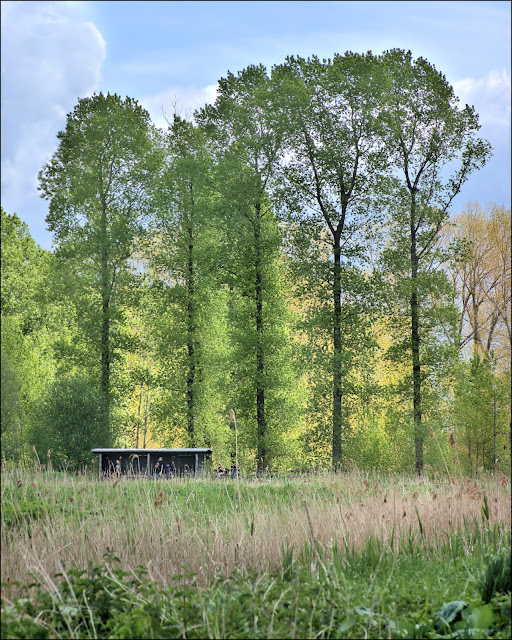 The line of trees are poplars: whole plantations of them were planted here by Bryant and May, manufacturers of matches. I wonder how many matchsticks you could get out of one of those trees? Since the RSPB (Royal Society for the Protection of Birds) took over the site, the water level has been allowed to rise, which is good for reedbeds, of course, though I've noticed that many of the trees are blowing over in the wind lately. I'm not sure if the two are connected, but I think they may be. The little building you can see is a lookout, just a bench with a roof over it, so you can look out over New Fen in comfort. 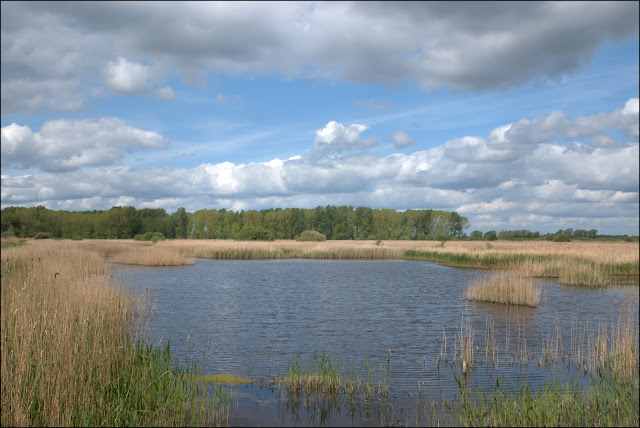 And here is that view (above) and another look across the river valley (below). 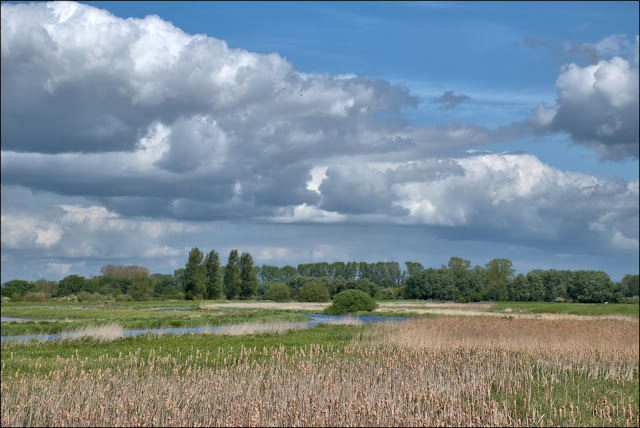 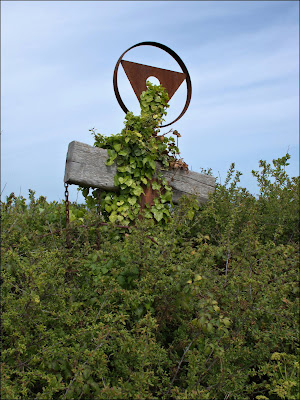 Some of you were in the right general area. In 2008 the Salthouse Annual Art Exhibition, which takes place in the church, organised a Sculpture Trail. It was some 14 miles (22.5 Km) in length and had a mixture of permanent and temporary exhibits. After fourteen years this is the only one left. It's called Monument to Salthouse Mariners and is made from parts of the old sea defences. Here's what it looked like in its prime: 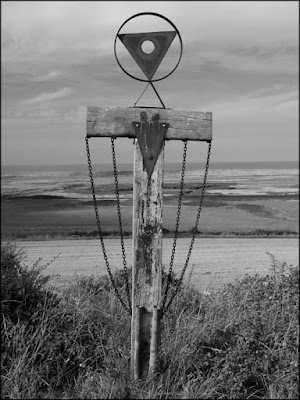 (found on the internet)
As usual when searching, I found out something that had never occurred to me. These ports, even when the river channel was fully navigable, must have been incredibly difficult harbours to get in and out of. This was actually an advantage, as pirates, who were unfamiliar with the idiosyncrasies of the currents and sandbanks, could not gain access.
Take care.
Posted by John "By Stargoose And Hanglands" at 07:40