On our return from Happisburgh, around which we've lingered for the last three posts, we passed close to the village of Barton Turf. The "turf" part of the name comes presumably from the digging of peat, or turf, nearby. The Norfolk Broads, those lakes and waterways famous for both boating holidays and wildlife, owe their existence to centuries of exploitation of peat. 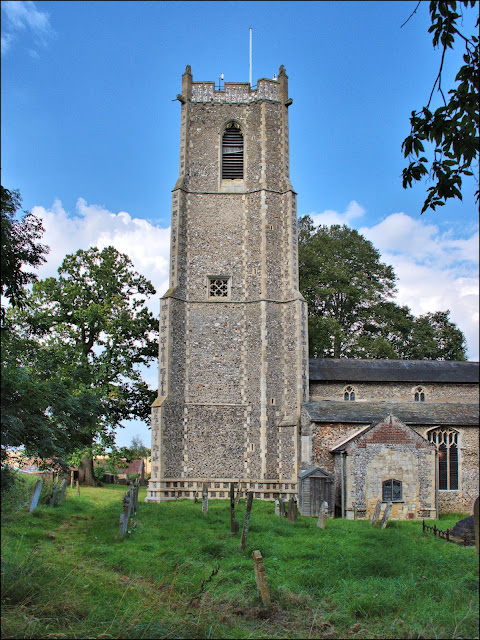 You don't even have to venture as far as the village to see its imposing church, for it stands all alone, surrounded by fields, a mile or so away from its parishioners. It contains a great treasure within, but is nevertheless open every day. 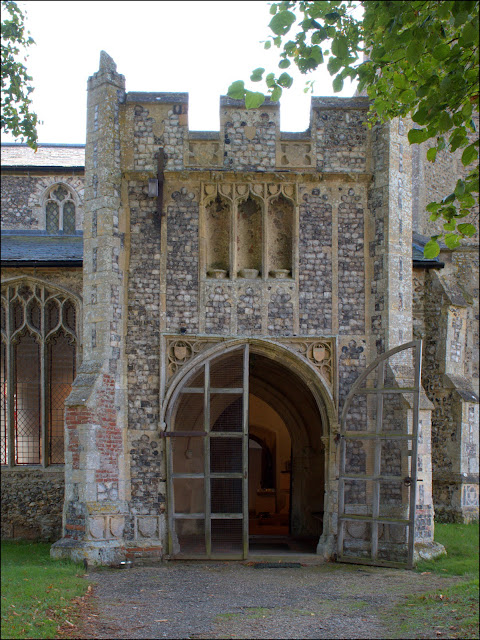 The church had that afternoon received a group of visitors, and the helpers from the village were having tea as we entered, but they knew exactly what we'd come to see and insisted that we came in. 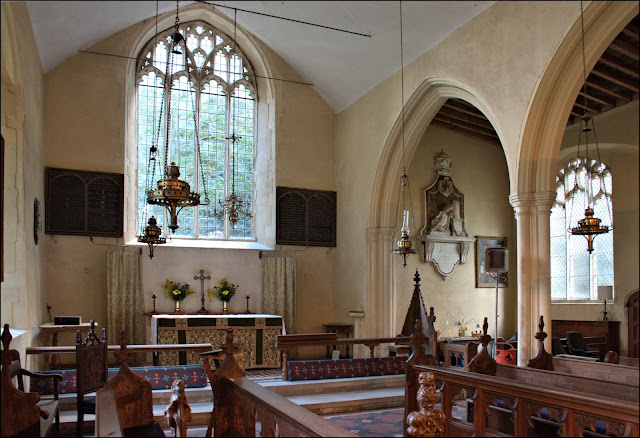 This is the Chancel and it shows the way in which our churches have developed over the centuries; little additions have been made in different styles over the ages but the past was always held in gentle affection and room has generally been made for items from past eras. Rarely has there been a desire for a fresh start and the deliberate destruction of history. 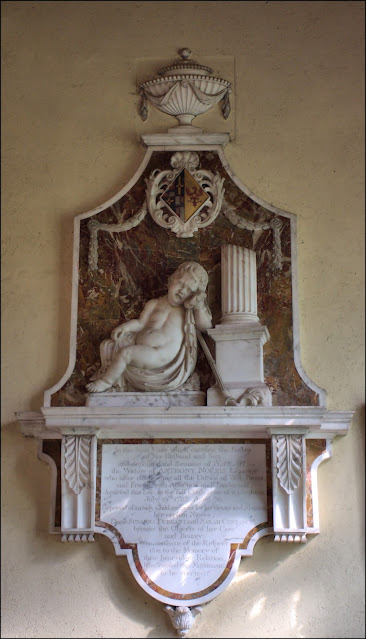 So things like this memorial, with its weeping cherub and broken pillar, which may not be exactly to modern taste, is nevertheless accommodated alongside features that are either more ancient and more recent. Which brings us to the Chancel Screen.... 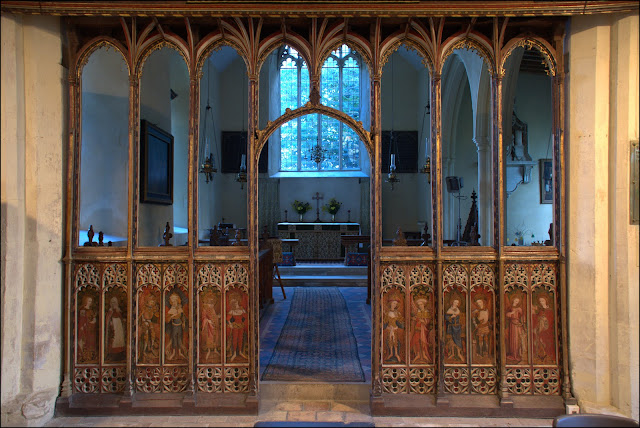 The exception to the peaceful evolution of our village churches took place with the rise of Puritanism. Wall paintings were whitewashed over, stained glass was smashed, statues were beheaded, and faces were scratched out on paintings. The level of destruction varied across the country and in this isolated corner of Norfolk a few priceless painted screens escaped relatively unscathed. 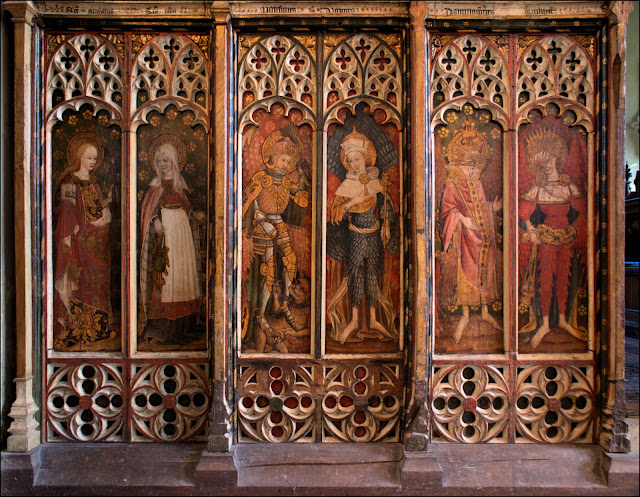 Represented here are (left to right): St Apollonia, St Sitha; then four orders of angels - Powers, Virtues, Dominions and Seraphims. You'll notice that the two panels to the right have had their faces scratched out, but that appears to be the only damage which has been inflicted. All these works of art date from around 1450 AD. 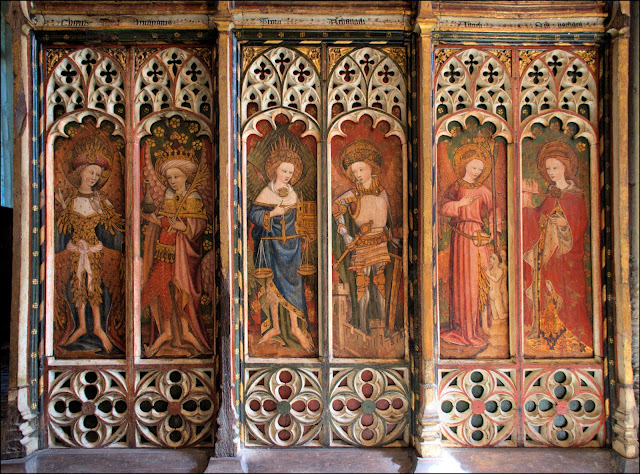 Then on the other side of the central opening are five further orders of angels Cherubim, Principalities, Thrones, Archangels and Angels; then lastly St Barbara. The three female Saints, Apollonia, Sitha and Barbara all were the subjects of cults during the Middle Ages. The Orders of Angels are largely forgotten today - there is no mention of them in The Bible but were much discussed by scholars of the day.
I've included links for anyone who wants to learn more about the subject, but for now lets just enjoy the artistry speaking to us from over the intervening five hundred years : 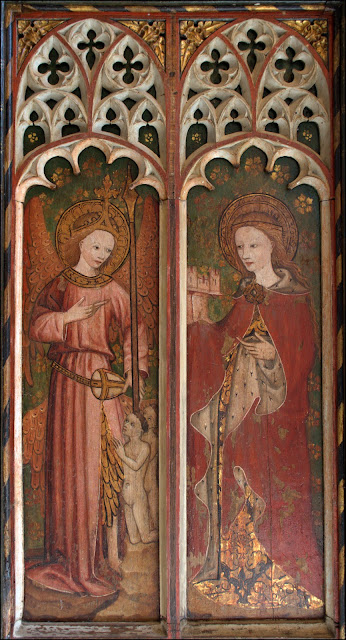 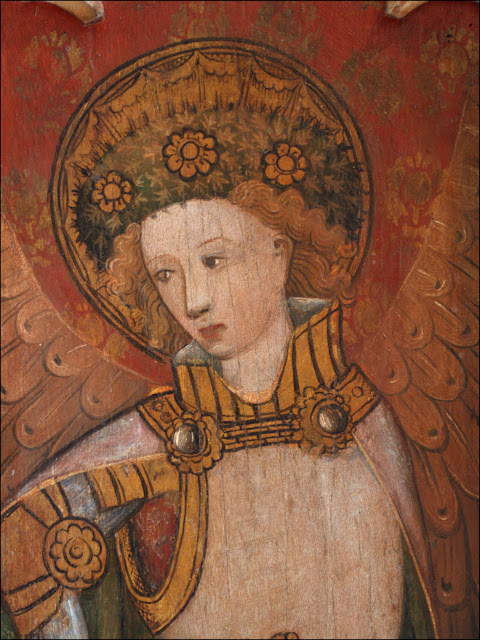 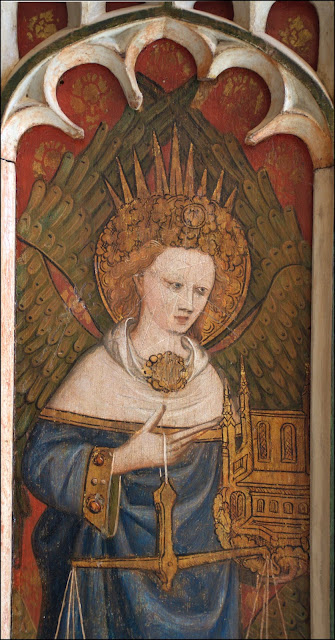 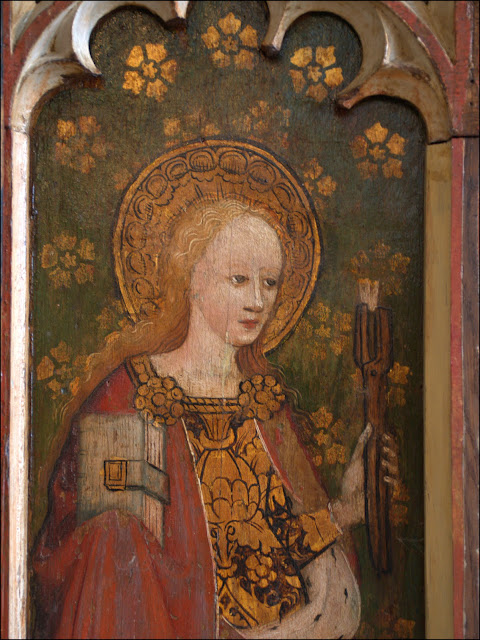 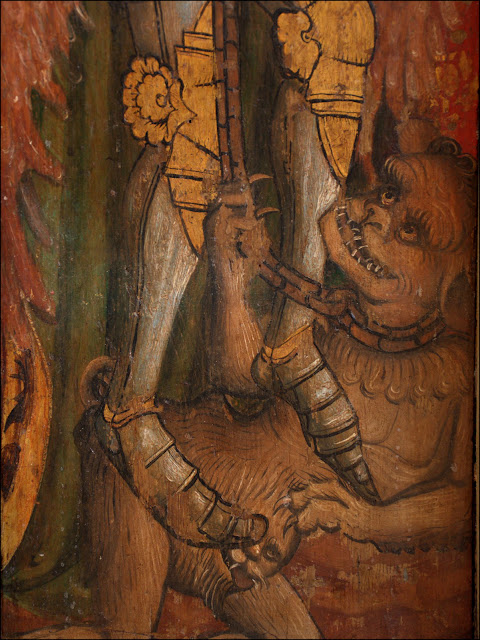 Fearsome beast at the feet of Powers 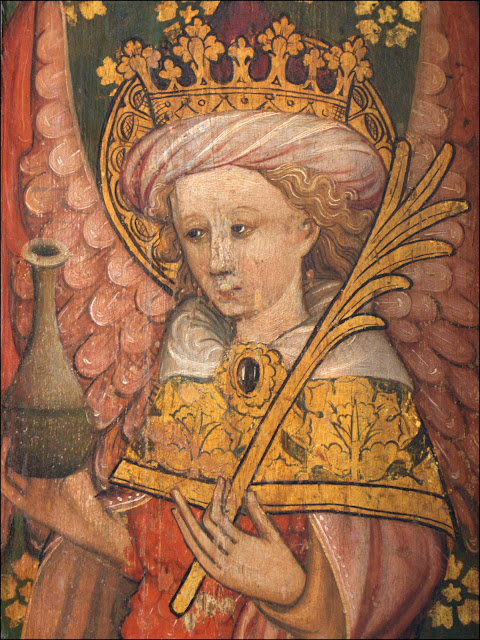 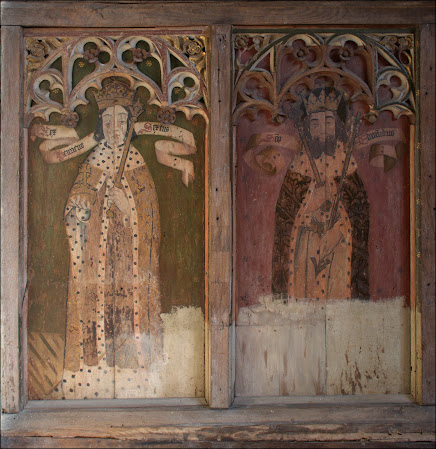 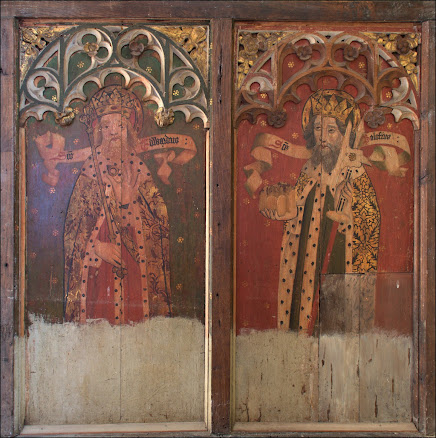 Represented here are: King Henry VI, St Edmund, Edward The Confessor and St Olaf. All four were also the subjects of cults at the time.
It's interesting to consider, as we leave the church, that such beauty was probably funded by the digging of turf in the neighbouring Barton Broad - grubby and hard-working peasants giving rise to shining golden angels.
Take care.
Posted by John "By Stargoose And Hanglands" at 07:01

Email ThisBlogThis!Share to TwitterShare to FacebookShare to Pinterest
Labels: Norfolk, Visits To Churches