In A Battle Zone

It'll be OK. There's a ceasefire at the moment in this particular battle, though it's an absolute certainty that hostilities will begin again in the next few months, maybe sooner. On one side is one of the greatest powers in the world, while pitted against it is a tiny community who seem largely forgotten by most people. Every year the national news reports another battle lost in their endless war. Sooner or later they seem to be doomed to complete obliteration. 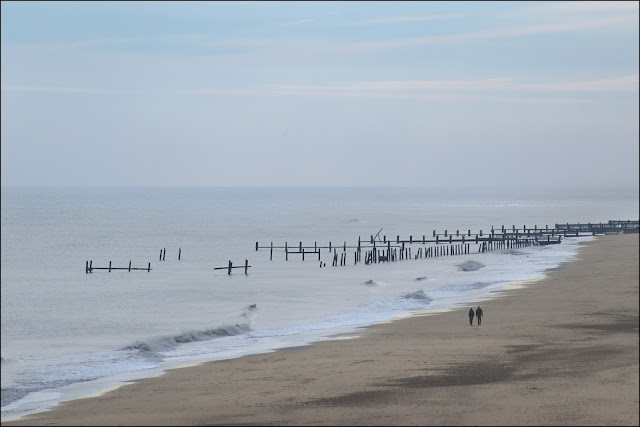 This is the battle between the plucky village of Happisburgh and the world's oceans, specifically the North Sea. Not that Happisburgh has always been at war in this way; there used to be another village between them and the sea - no need to tell you what befell that little community. There's a Whimpwell Street in Happisburgh but the village of Whimpwell disappeared as long ago as the twelfth century. 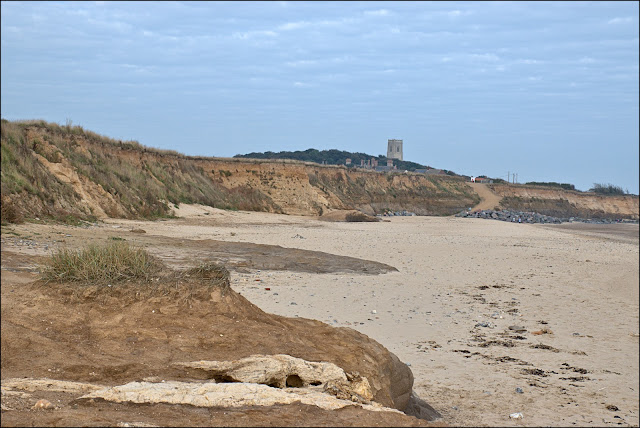 Every winter storms tear in and nibble away at the friable cliffs on which Happisburgh stands: a few houses tumble down on to the beach below, the lifeboat station is swept away, roads plunge over the cliff, water-pipes are left hanging forlornly in mid-air. The sandy ramp you can see on the right-hand side of the picture above is just the latest solution to allow people to get down on to the sands. 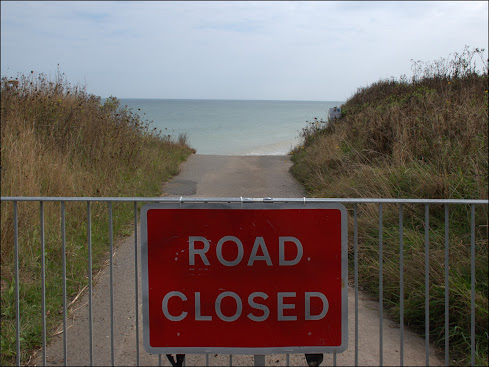 As if the residents of Happisburgh didn't have enough problems they are also involved in a perpetual struggle to convince people that their village is not pronounced "Happy's Burg" at all, but is actually HAZE-br. 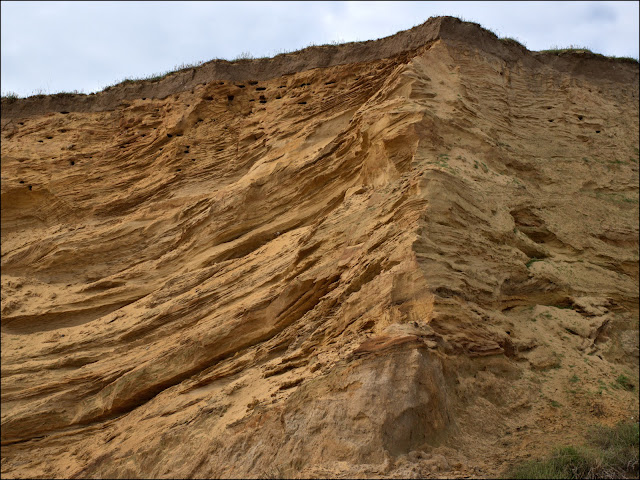 Every cloud, they say, has a silver lining. These soft eroding cliffs have several little holes up near the top; if I'm not mistaken these are the nest-holes of Sand Martins (that's Bank Swallows, for those of you across the Atlantic). 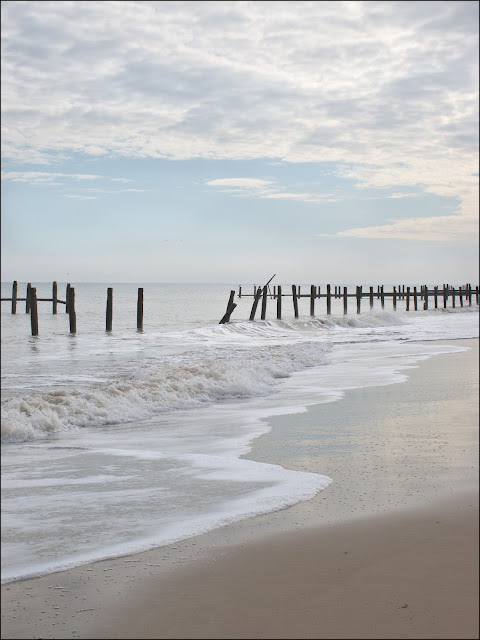 And this lovely sandy beach has been formed just south of the village, which has helped the tourism industry and provided the local dogs with a marvellous playground. 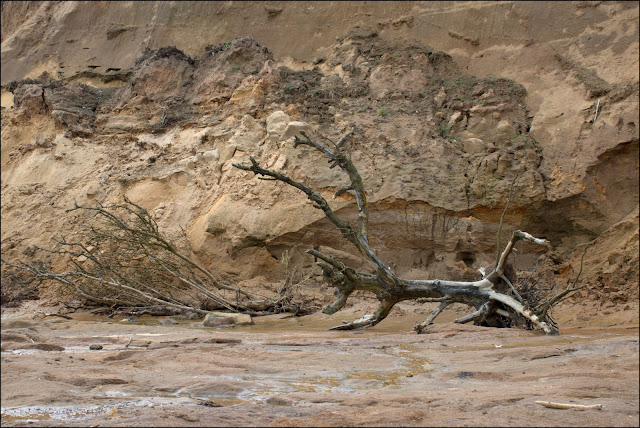 Then in May 2013 the sea uncovered some human footprints in the soft rock at the base of the cliffs. Within a few days the tides had destroyed them, but not before they'd been studied, measured and photographed. Someone also had the bright idea of investigating the pollen that had survived in the deposits. What was discovered was astonishing and reshaped much of our thought about early humans: these footprints were no less than 840,000 years old! From the size of the footprints archaeologists believe it was a family group, possibly searching for shellfish or other food in a river delta. 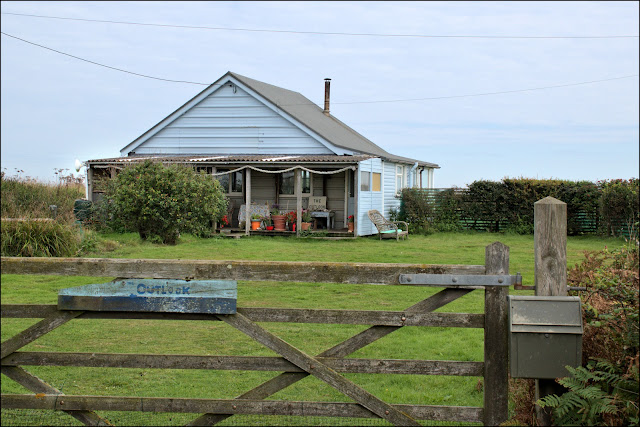 By the time my brother and I reached a place known as Cart Gap we were looking for food too, but luckily there were ice creams for sale. We began the walk back behind a row of seaside shacks built on the cliff tops that are rather better protected from the sea. Little holiday homes like these sprang up before strict planning rules were introduced and have been there ever since. 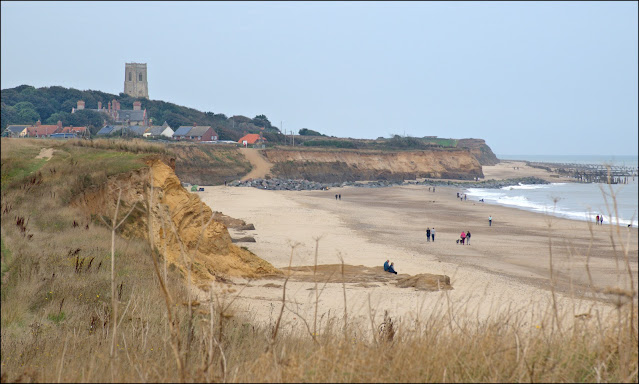 We soon came to a path leading back along the cliff top - keep well back from the edge! 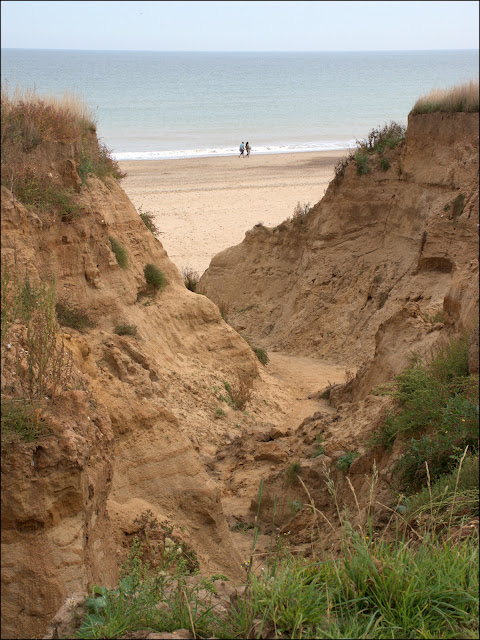 Not the sort of place to wander on a dark, foggy night! 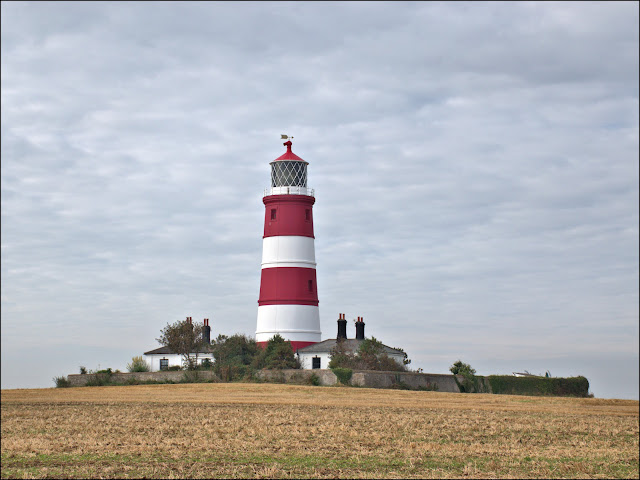 Just a little inland stands Happisburgh Lighthouse, built in 1791, shortly after a terrible maritime tragedy when 70 ships and 600 men were lost in a storm off the Norfolk coast. In 1988 Trinity House, who operate lighthouses in England and Wales, announced the closure of Happisburgh Lighthouse. Local people realised how dangerous that could be and began a campaign (yes, they're always fighting something!)  to keep it open. It is now the only independently operated lighthouse in the land. 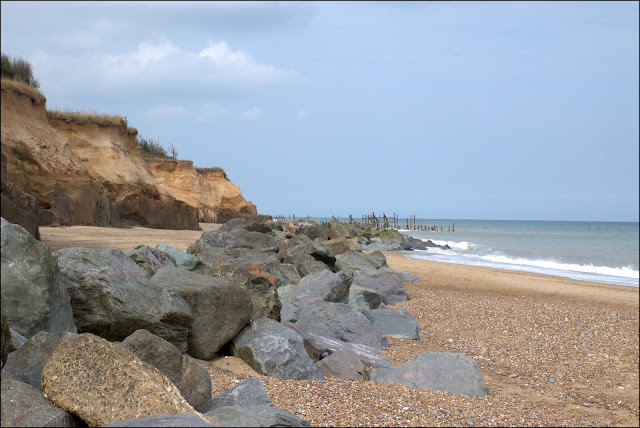 If we go north from Happisburgh we'll see more of the efforts to control the destructive force of the sea.

Although attempts at coastal protection began along this stretch of coastline as long ago as 1802, little was done at Happisburgh till 1958 when a structure of steel and wood did much to protect the cliffs. 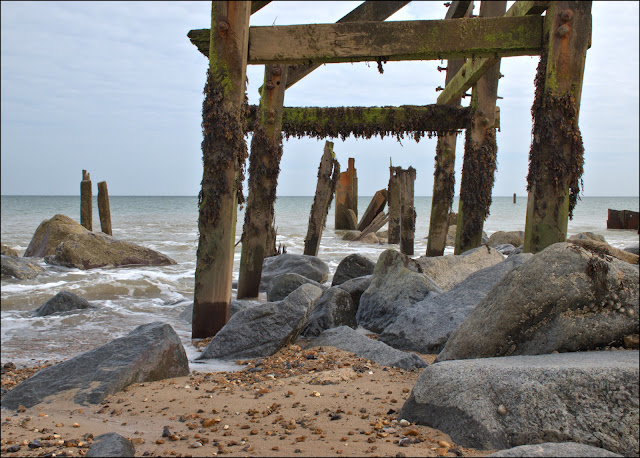 Regular repairs took place to maintain the breakwaters and revetments but these merely delayed the inevitable. 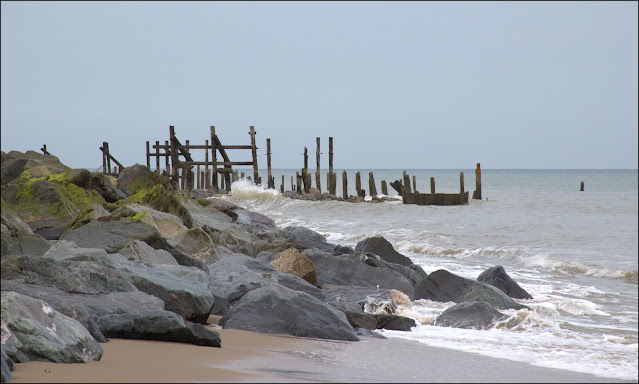 In recent years a line of huge boulders has been placed along the beach to absorb some of the power of the waves. This is all very expensive work and official Government policy is to protect only the most valuable coastal areas, which mostly means big towns. Unfortunately for the people of Happisburgh and similar places the re-alignment of coasts is an unavoidable natural process.
Take care.
Posted by John "By Stargoose And Hanglands" at 14:15