Thorpeness is rather different from any other seaside place on these islands. It's to be found down in deepest Suffolk sandwiched between the ancient town of Aldeborough, with its connections to the composer Benjamin Britten, which lies a mile and a half (2.4 Km) to the south; and Sizewell nuclear power station which is about two miles north. It owes its existence not to any advantage bestowed on it by geography, nor to any special favour received through history......No, it's sole raison d'être is that an eccentric aristocrat saw a flooded field here one winter's morning. 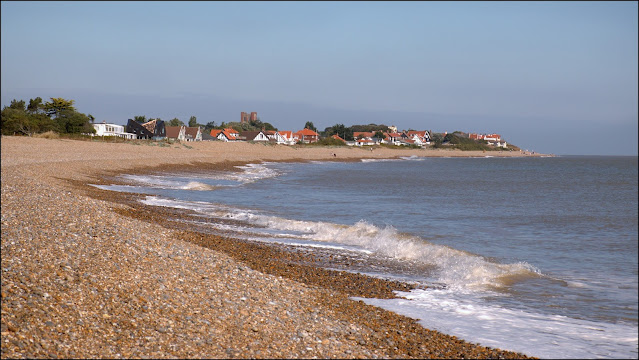 Rather than having it drained, as most gentlemen of his era might have done, Glencairn Stuart Ogilvie decided to make it into a boating lake and build a holiday village around it. But then there's something slightly odd about the whole place. 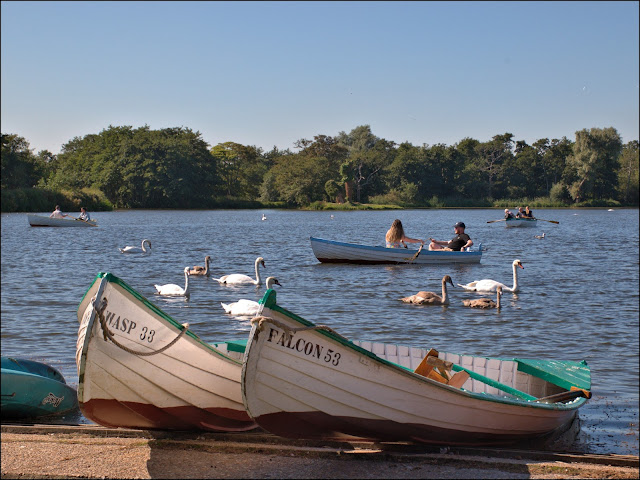 You can never really quite work out whether Ogilvie was the kind of man who had very precise but individual ideas about what he wanted to achieve; or whether he was a hapless and impractical soul who aimed at something he'd seen done elsewhere but fell rather wide of the mark. Lets have a look around at some of his ideas. 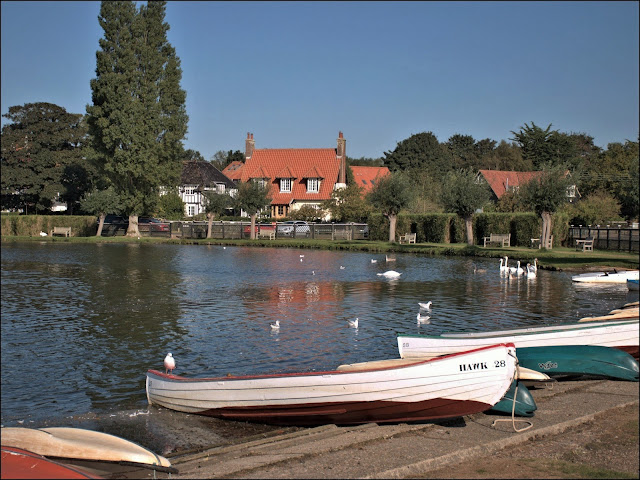 He chose to create a "typical English village" between the boating lake and the beach. 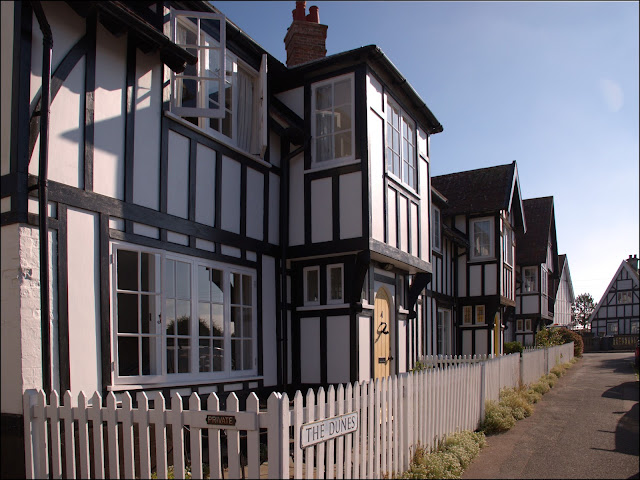 The style chosen for many of the houses is best described as "Mock Tudor" and was quite fashionable just then. He may well have been influenced by the "New Town" movement which was gathering pace at the time, though Thorpeness was always going to be a much more modest settlement. If you have heard of the place at all it's probably because of this... 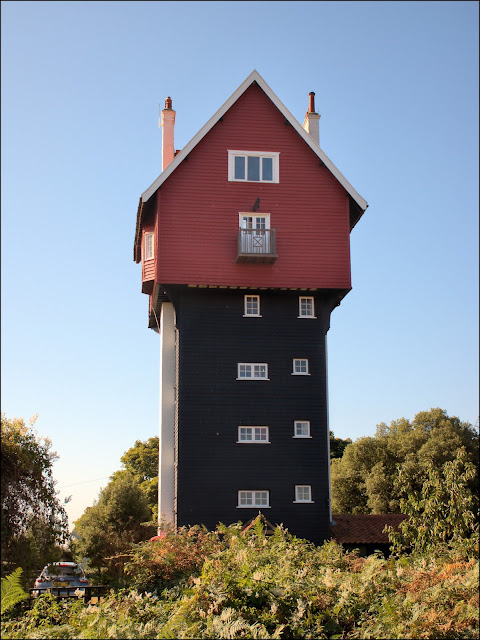 This is "The House In The Clouds" and has become one of the more famous landmarks of the Suffolk coast. It was originally a water-tower, but Ogilvie thought it spoiled the look of the whole place so he disguised it as a typical small dwelling - albeit five storeys up in the air! When it ceased to be used as a water-tower it seemed the obvious thing to convert it to a games-room for the villagers. Nowadays you can hire the place as a holiday home. There are times when Thorpeness seems to be the lovechild of Enid Blyton and Salvador Dali! 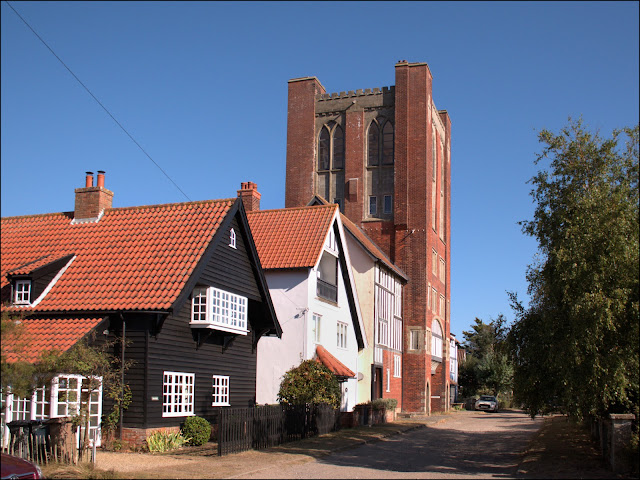 Once you start building disguised water-towers why stop at just one? Here's another that might be a castle keep or a church tower. 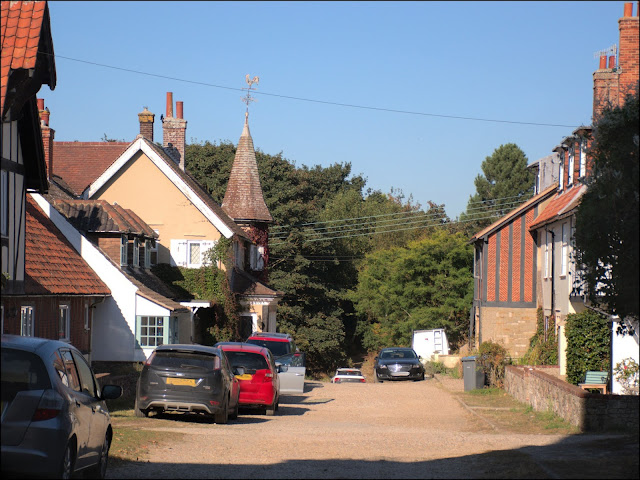 But if you go through the arch beneath the tower you find yourself in a quiet back street. 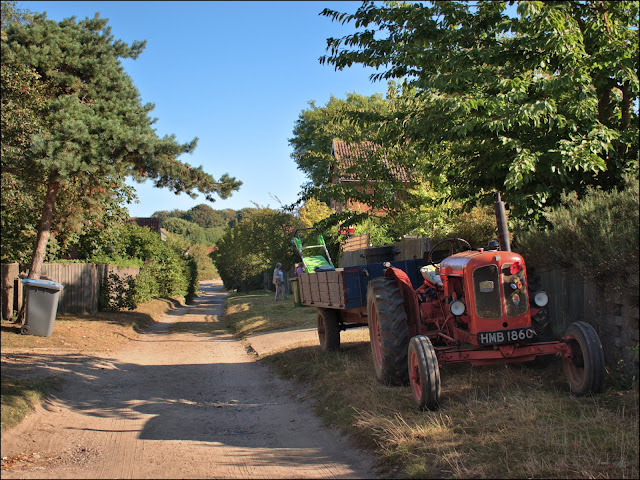 This track, which looks completely rural, runs right through the middle of the village. 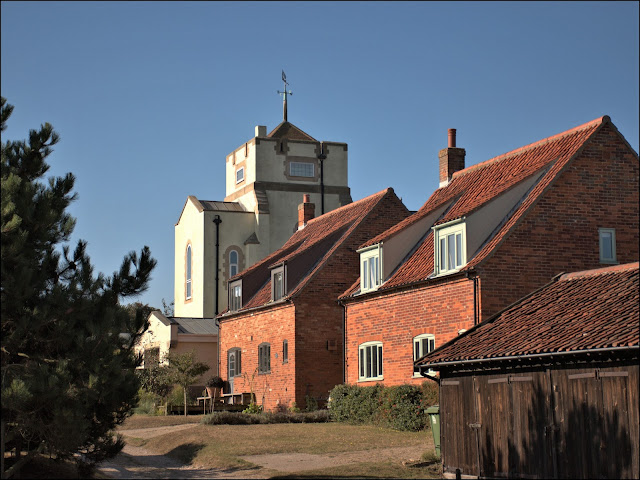 Here's the church which has recently been converted to residential use after years of standing unused and apparently unloved. 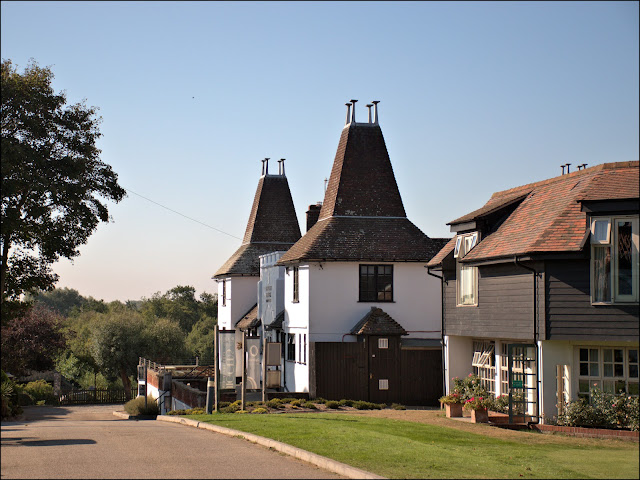 And here's the golf club with an 18-hole course designed by James Braid, who also designed such famous courses as Gleneagles and Carnoustie. For many years Thorpeness was completely owned by the Ogilvie family and they only sold property to their friends or housed workers from their estate. 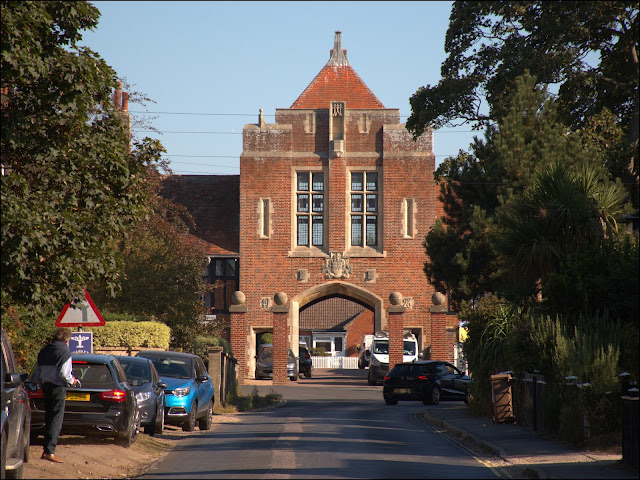 A grand gatehouse announces your arrival at....well, nowhere in particular! 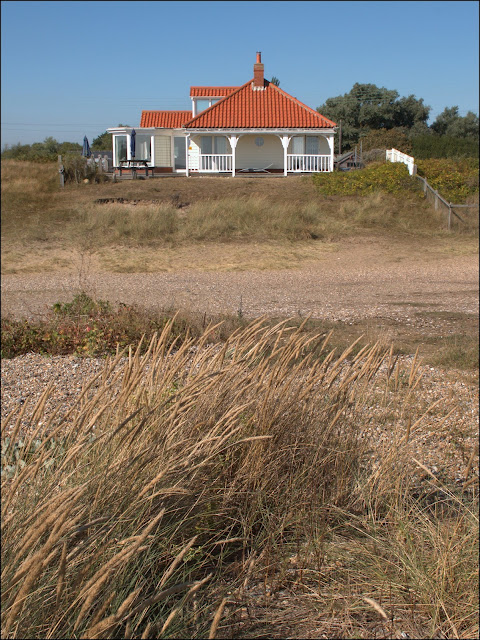 Like many other seaside places in the UK there are beach houses of varying styles stretching along the coast, though presumably they were not part of the original plan. 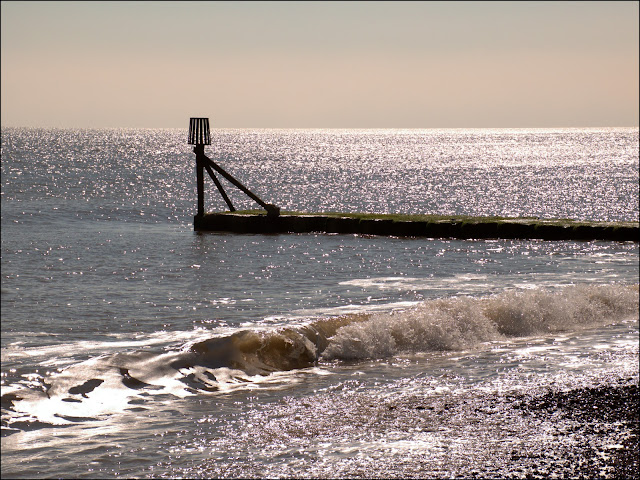 The bright sun beat down upon the incoming waves as we wandered back along the beach, which along this stretch of coast is little more than a bank of shingle with not a grain of sand in sight. 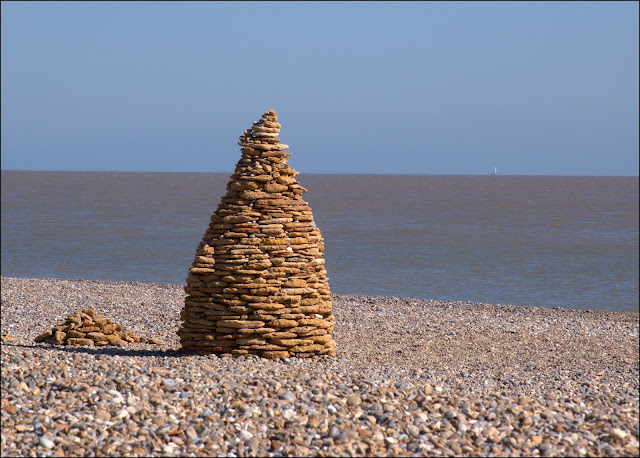 You often see cairns on our beaches; it's just what people do when confronted with an inexhaustible supply of stones. But here somebody has gone to the bother of importing the building material. I don't know who, I don't know how and I don't know why. But around here the inexplicable seems commonplace. 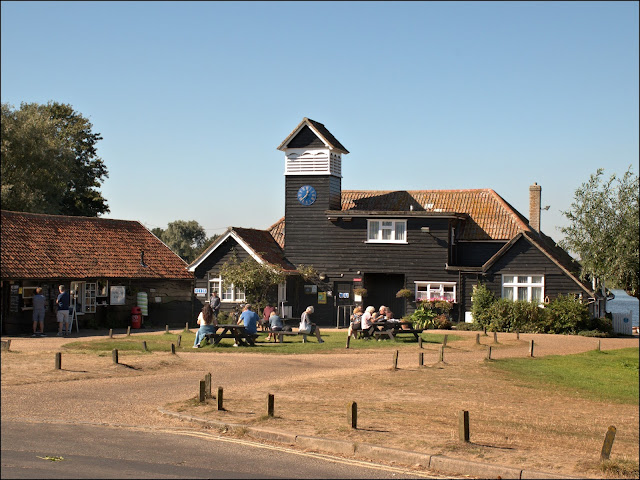 We'll head back to the village and The Boathouse where you can buy a variety of food and drink and sit by the waterside, watching the world go by. The Meare has a large number of islands and hidden backwaters, all of which are named. Not only that but the names were dreamed up by Sir James Matthew Barrie, no less. Yes, that's J M Barrie of Peter Pan fame, a friend of the Ogilvie family. 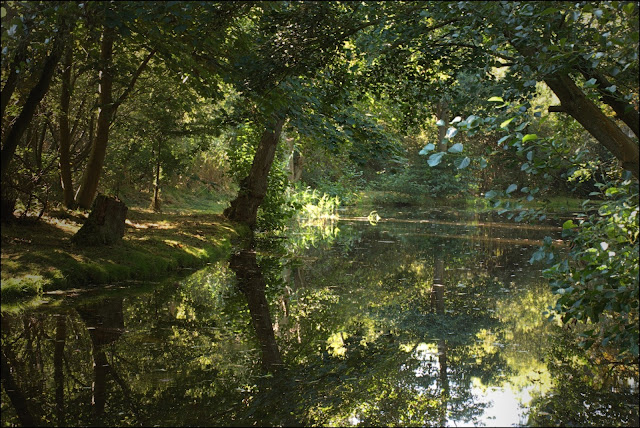 This, for example, is The North-West Passage - ideal for young pirates and explorers! 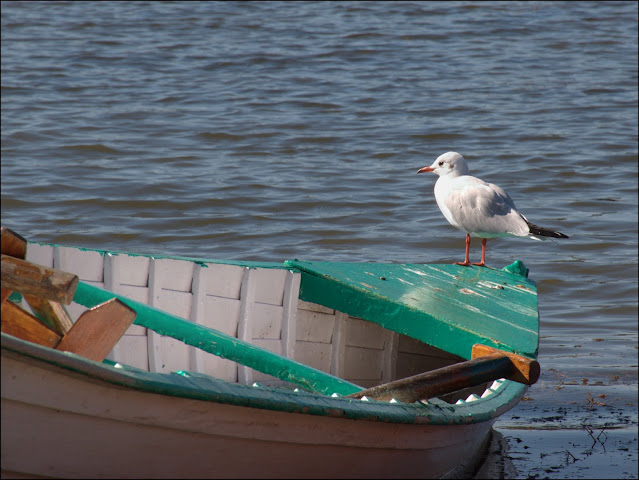 Tempting as it was to re-enact our teenage years by hiring a rowing boat or a punt, we decided to take life easy before moving on to our next destination.

Posted by John "By Stargoose And Hanglands" at 08:08