When I was a student in London I used to hitch-hike home along the A10 road. Being a student of Geography with an interest in the historical development of our landscape, I probably knew I was travelling on the line of an old Roman road. The road in those days went straight through a number of towns and villages and the rides I thumbed often deposited me in these places. So there was more than a little nostalgia as we left the new dual carriageway by-pass and took the original road down to the twin villages of Wadesmill and Thundridge. 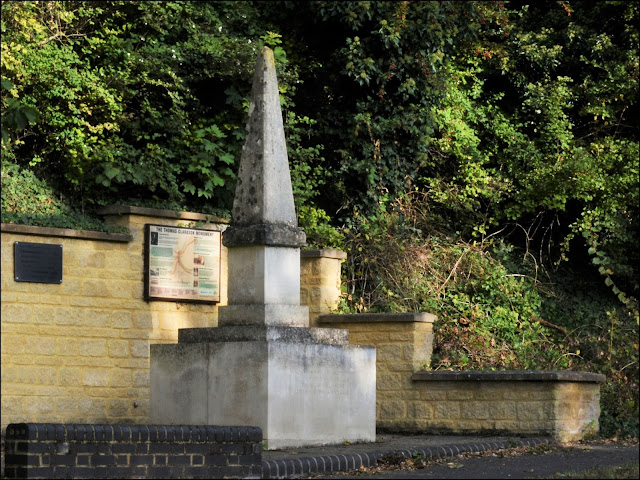 There was something I wanted to see before starting the walk. Long before I made my way along here as a student, another young man was travelling from Cambridge University back to his home and sat down by the roadside to rest. Whereas I was probably thinking about meeting up with friends for a beer, he resolved to change his life and influence world history. He'd recently written an essay, in Latin, on the topic of slavery. What he had learned troubled him deeply and it was here that he made his decision to spend as long as it took to persuade people to abolish the slave trade.

His name was Thomas Clarkson and the decision made him an important figure, but also made him many enemies and the effort he put into the struggle damaged his health. The monument above was paid for by the local landowner here, when told the story of Clarkson's decisive moment. 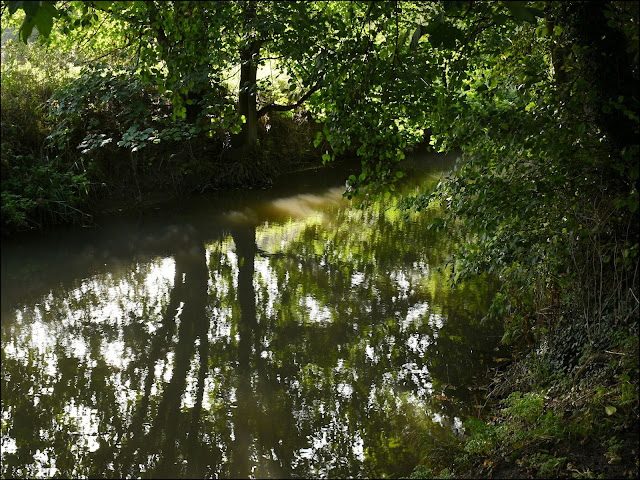 My brother and I set off alongside the little River Rib which divides Wadesmill from Thundridge, along an old lane now used mainly by dog-walkers and runners, but once of local importance in that it led up to the manor house and parish church. 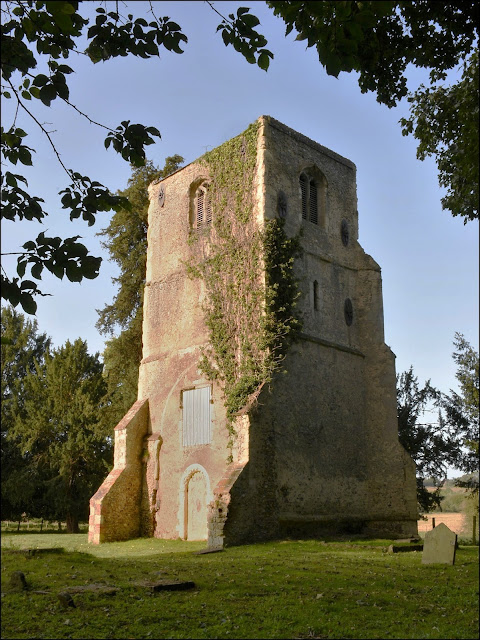 The manor's long-gone, though you can still make out the old moat, and all that's left of the church is its semi-ruinous tower. I was glad to see that it still stands as, although it's a protected building, no one is particularly keen to pay for such upkeep as it needs. It also has a reputation for ghostly hauntings and witchcraft - difficult to imagine on such a bright, sunny morning. 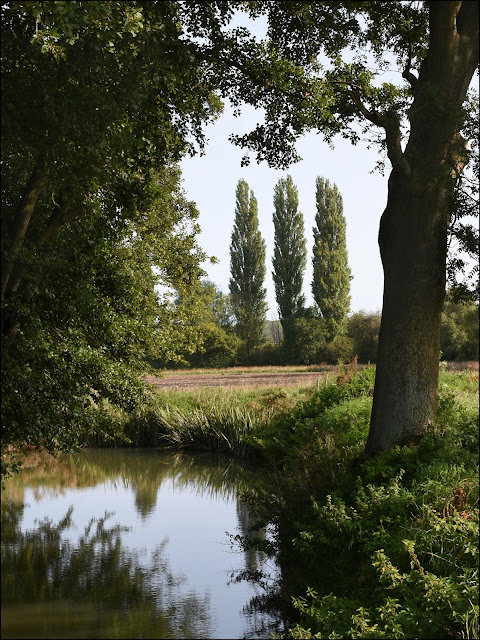 But then there were raucous screams echoing around the tree tops - a sound quite foreign to the English countryside. We had disturbed a number of Ring-necked Parakeets, a species which has made itself at home here in the last half century or so. Urban myth has it that they are all descended from the pet birds owned by Jimi Hendrix and liberated by him in Carnaby Street in London. (Incidentally it was 50 years ago today, Sept 18th 1970, that the guitarist died). 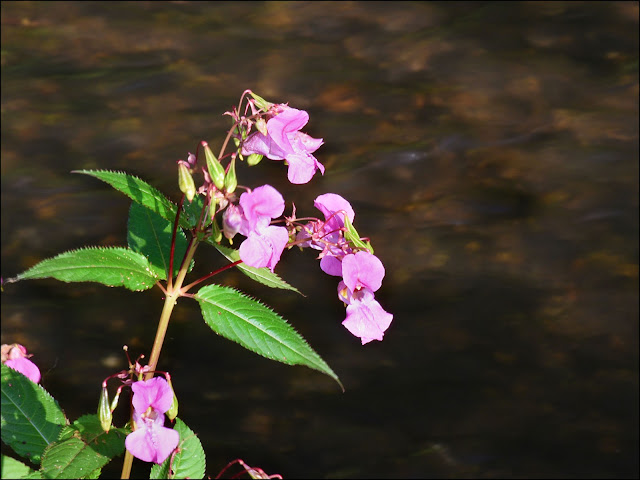 Another invader from foreign shores was lining the river banks. Although looking rather less threatening than banshee parakeets (or even Hendrix's screaming guitar) Himalayan Balsam has become something of a pest in this country. It crowds out other wildflowers and clogs up the river banks. However it seems less noticeable in recent years, possibly as it is killed off by spring and autumn flooding, of which there's been more lately. 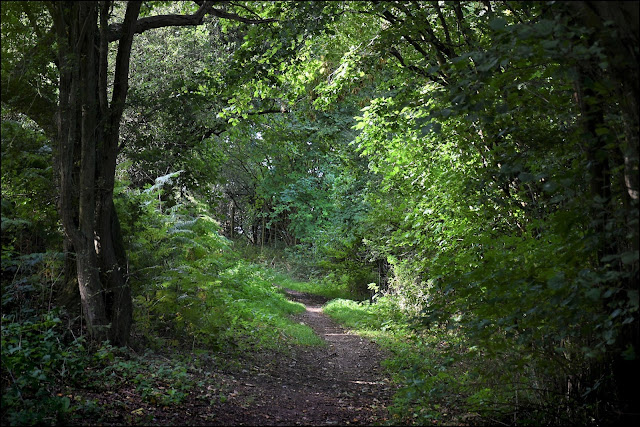 After losing the path temporarily we regained our intended route and passed through Sawtree's Wood. 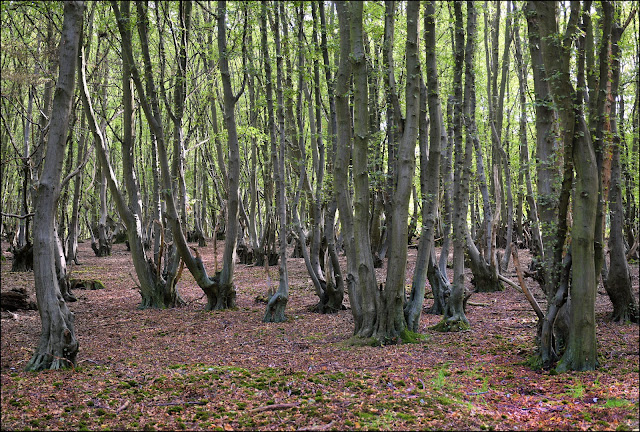 The wood suddenly changed character as we entered a patch of coppiced woodland where the trees have at some stage been cut off near ground level. The trees then respond by sending up new growth which can be harvested a few years later. 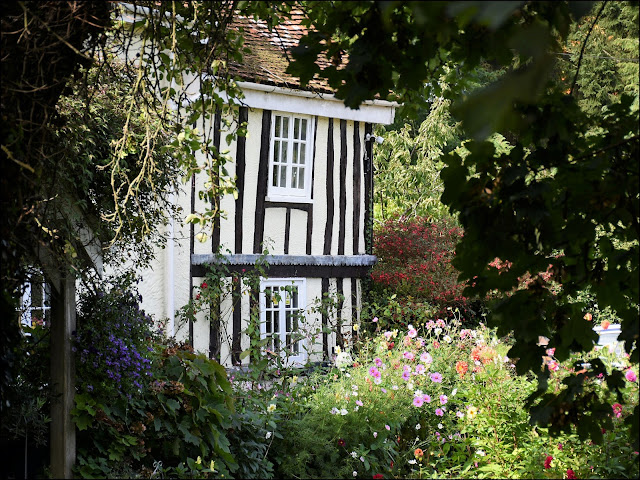 We emerged from the wood at the hamlet of Barwick Ford, which always sounds to me as though it ought to be in a classic novel, Thomas Hardy or George Eliot perhaps, and pretty enough, in part at least, to be in a painting. 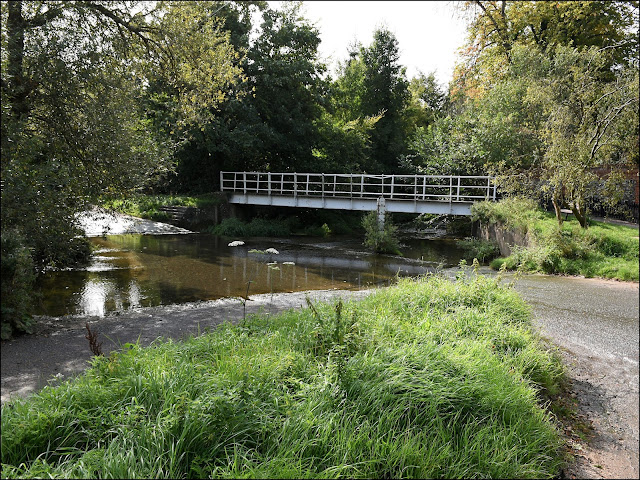 And that's the ford that gives Barwick Ford its name. It's quite deep even in September and we were glad there was a footbridge alongside. 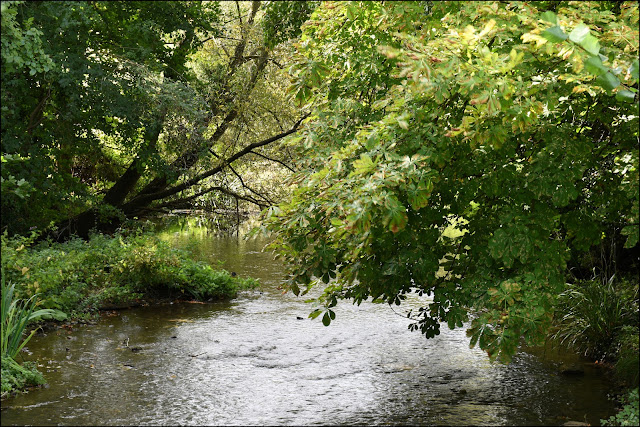 This is still the River Rib and, once across it, we will climb up through agricultural land and parkland to complete our circle. 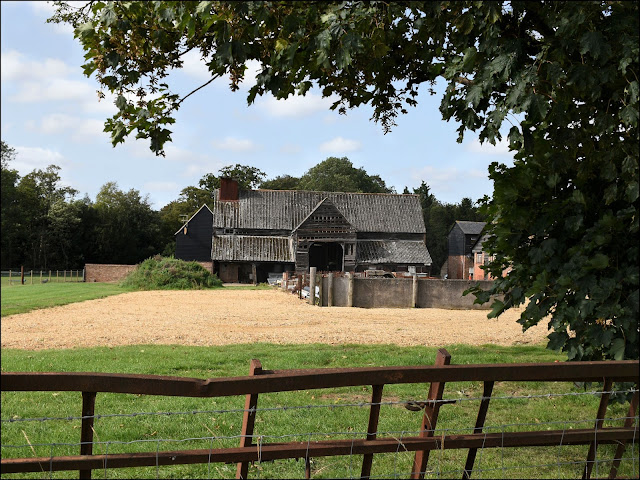 We passed by Home Farm with its old threshing barn still being put to some kind of use amongst the modern farm buildings. There are countless farms called "Home Farm" in England and they are almost all associated with large country houses. They existed to keep the land around the mansion tidy and to provide milk and meat for the table of the rich landowner. Often the land was also used for hunting foxes or shooting game-birds. 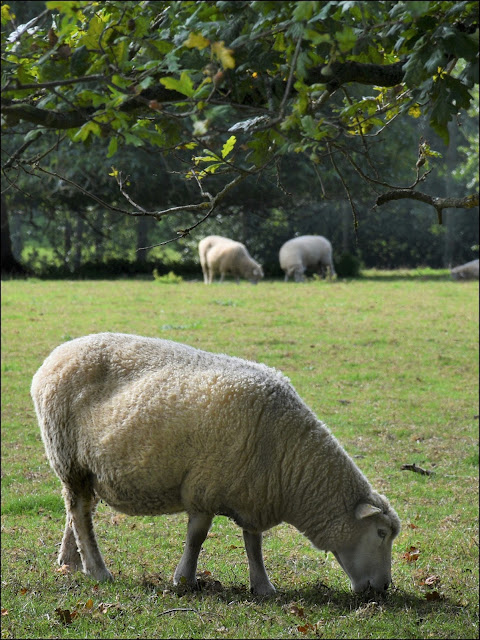 Usually a flock of sheep would be kept in the parkland surrounding the house to keep the grass nibbled flat, a purpose which they serve to this day. 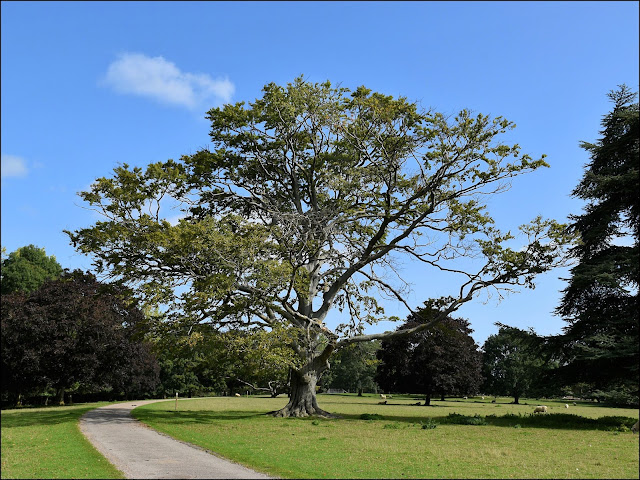 We made our way through the grounds of the big house known as Youngsbury without getting a view it. There were some magnificent old trees, many of which were exotic species perhaps planted when Capability Brown laid out the landscape of the park. 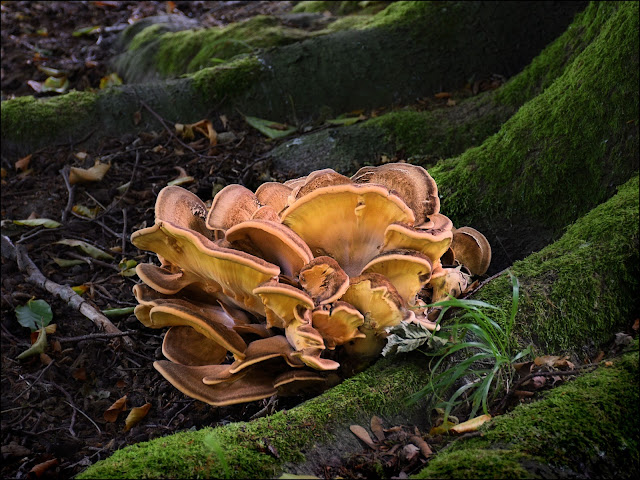 There was time to photograph this rather beautiful fungus before making our way back to the road. There was someone I wanted to see before we went home. 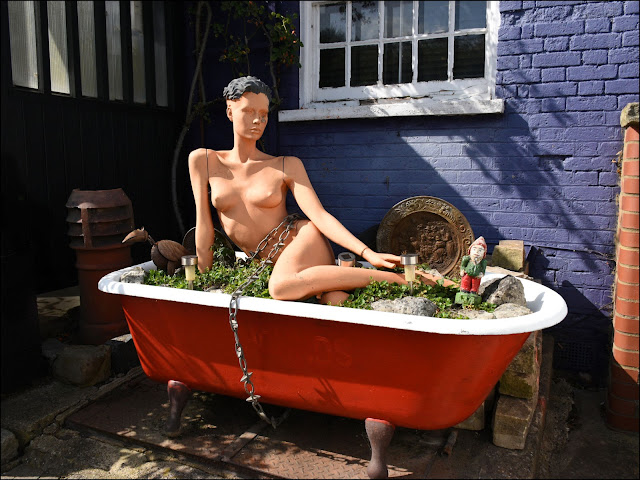 And here she is, as she has been for several years, summer and winter, outside what used to be the Fox and Hounds pub. Next to the old pub is a shop advertising "Affordable Junk".

I haven't been very good about remembering to include some music on my Friday posts and you're probably expecting me to include something by Jimi Hendrix on the 50th anniversary of his death. But I'm afraid I'm going soft in my old age and this charming little video keeps popping up on my YouTube page. Possibly the only drummer to ever upstage a Stevie Wonder harmonica solo or to include an impromptu geometry lesson...

Posted by John "By Stargoose And Hanglands" at 13:49