Down in deepest Hertfordshire, sandwiched between the A119 and A602 roads, near the railway to London, not far from the towns of Hertford, Ware and Stevenage, there's an unexpected wedge of quiet countryside that's worth exploring on foot. 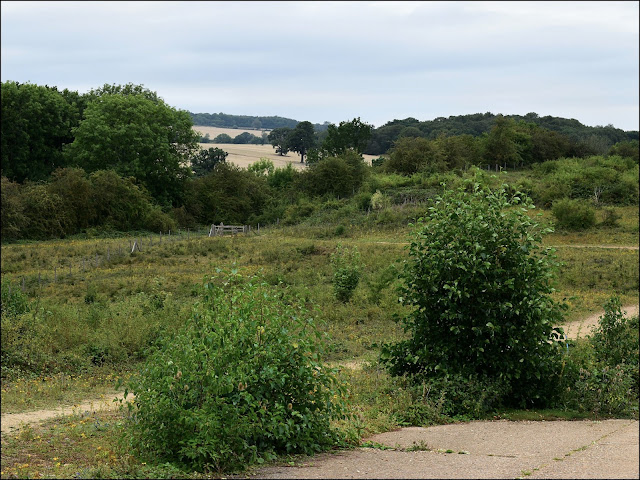 In Waterford (where we were a few months ago, looking at the stained glass in the little church) there's a small nature reserve on a minor area of heathland that's been exploited in the past for its sand and gravel. A few local folk were out and about taking their morning exercise on this overcast morning, 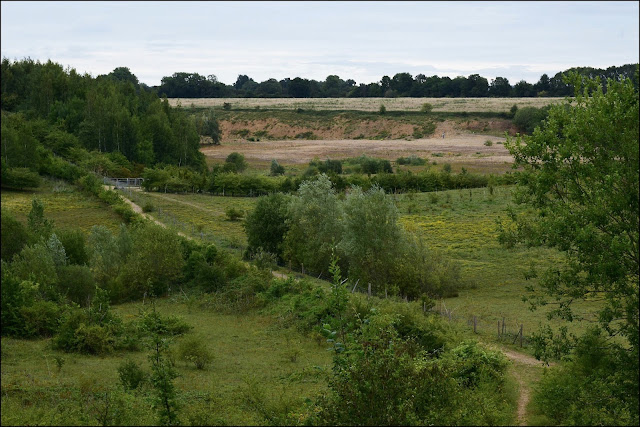 Just beyond the nature reserve, fenced footpaths lead through an area more recently used for sand extraction, but being recolonised by nature. Yellowhammers were flitting about among the bushes. 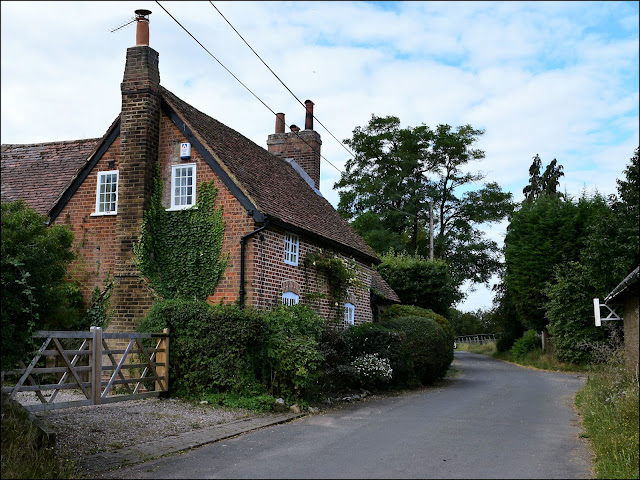 We were soon in the hamlet of Chapmore End where this redbrick cottage caught my eye. We wandered past The Woodman pub and the duckpond and on through a short stretch of agricultural land. 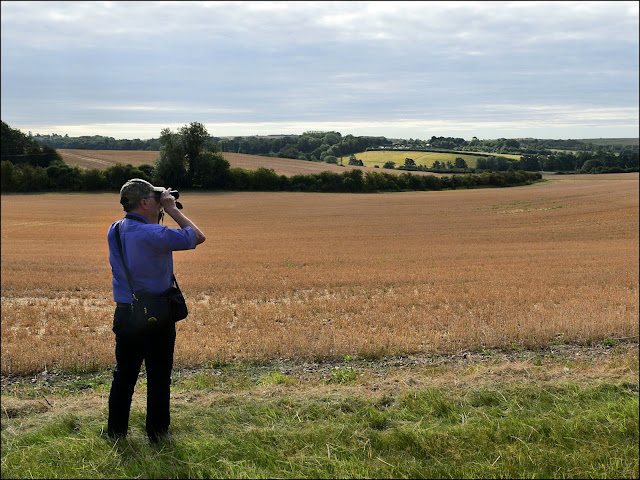 I'd promised Les that we'd see some Red Kites somewhere on this walk. At this early stage of the walk they were still a novelty as they swooped and twisted over the fields, though later we saw many of these superb birds of prey. It was thirty years ago that I saw my first one - and I had to go to mid-Wales to do that - but such has been their recovery that you can now guarantee encountering them in many parts of the country. 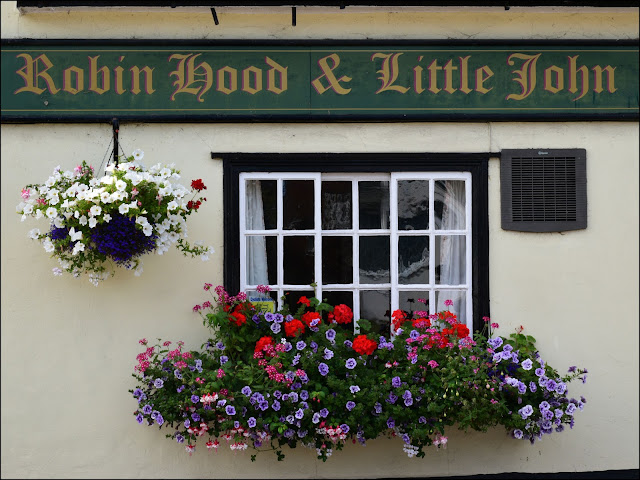 The small village of Tonwell has a perfect little pub named The Robin Hood And Little John - a long way from their usual stomping ground in Sherwood Forest! 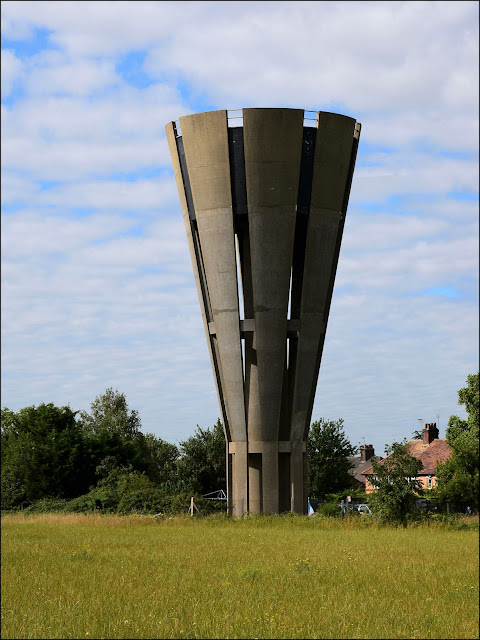 There's also this iconic building. It's a water-tower dating from the 1960s and dominates the skyline around this part of Hertfordshire. It's a protected building even though it's no longer in use. Browsing the internet I found that it's been bought by a property developer with plans to convert it to an unusual residence with a roof-terrace up on top. Now it just awaits someone to put up the money for the scheme. It won't be me. 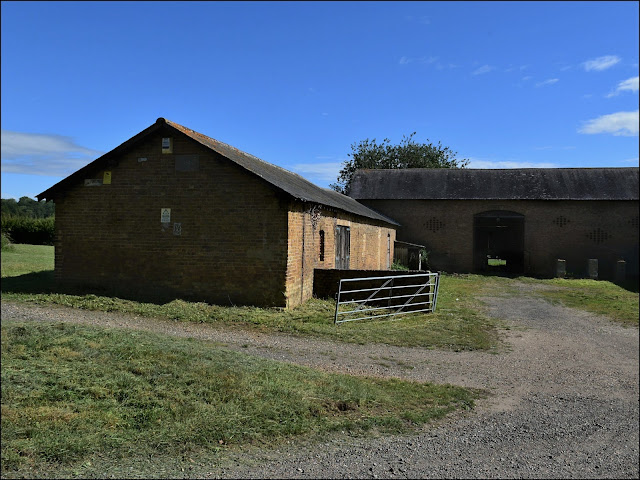 A cluster of farm buildings at the end of a rough track is part of Bengeo Temple Farm. The "Temple" part of the name is a reference to the fact that this land was once owned by the Knights Templar back in the Middle Ages. There are rumours of treasure being buried somewhere around here. 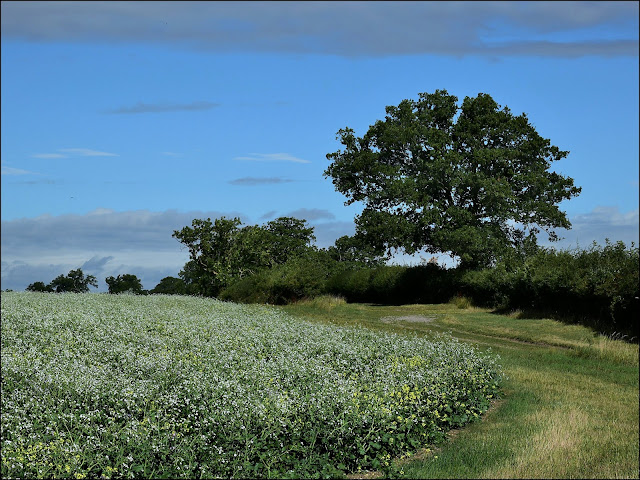 The path led on beside a field of...well, what? It's a brassica of some sort and looks a bit like oil-seed rape though it's not yellow. Whatever it is I've seen a couple of fields of it lately.
(Since writing the above I've done some research and discovered that the crop is Fodder Radish and it is grown on organic farms as it helps control weeds and pests. Later it is cut and ploughed in, improving soil structure. It also provides cover and food for wild birds) 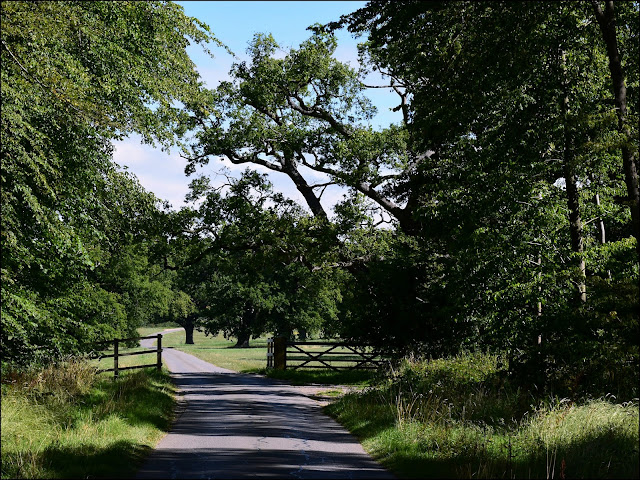 We're now entering the parkland which surrounds Sacombe House and Woodhall Park, two grand country mansions dating from 1803 and 1771 respectively, though we won't see either of them on this walk. Although privately owned, both estates are threaded by numerous footpaths and cycleways enabling everyone to enjoy this historic landscape.

Here's a useful and informative sign telling you that you can walk in either direction - but where to? 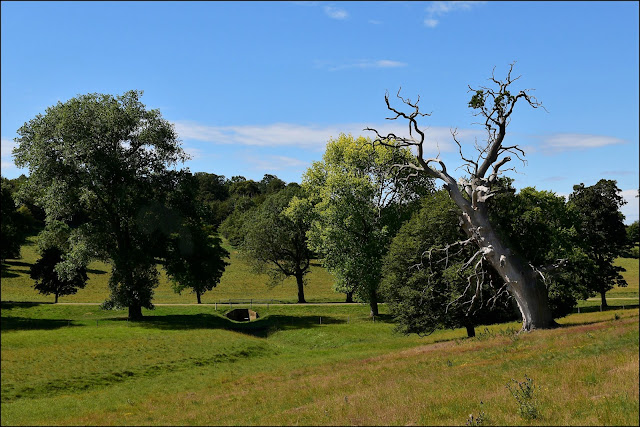 It's typical of the landscaped grounds that were laid out in this period and the present owners are doing much to restore the watercourses and wetlands and manage the land for nature. Woodhall Park, the main house, is now used as a school. 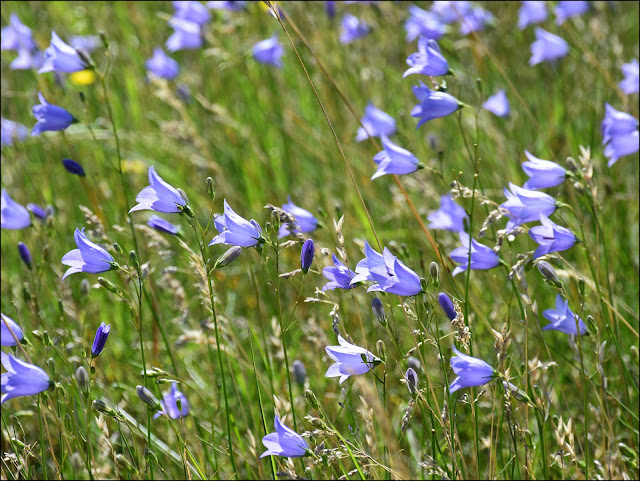 A rather nice patch of Harebells were blowing in the wind. 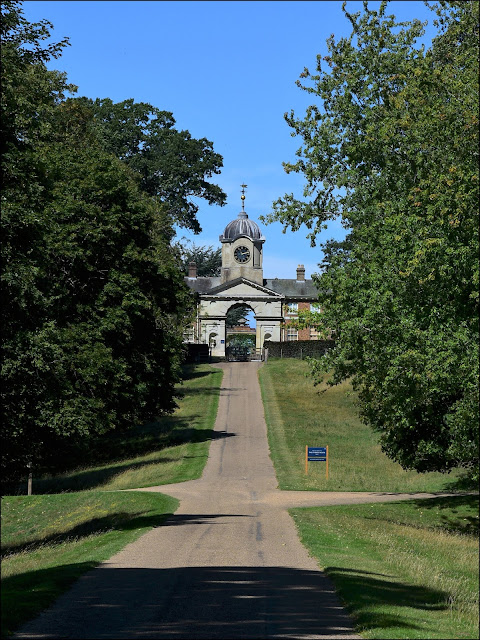 Now you might think that this grand avenue is leading you to the Hall itself, but no, that building is just the stable block, which probably housed the coachmen and grooms as well as the coaches and teams of horses. But where did all the money come from? 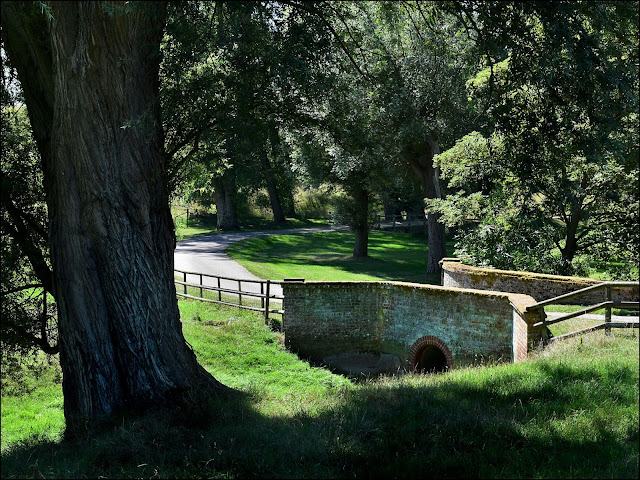 As is often the case it's probably best not to dig too deeply; suffice to say that Thomas Rolt, who built Sacombe House, and Thomas Rumbolt, the owner of Woodhall Park, both held high positions in the East India Company. 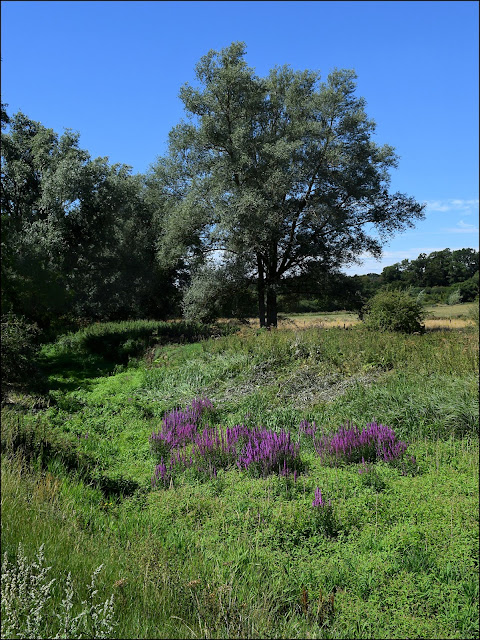 From here we're now going to follow the River Beane downstream back to Waterford. Believe it or not that's one of the river's channels above, though there is another close by which presumably contains the water. That's Purple Loosestrife flowering on the damp ground. 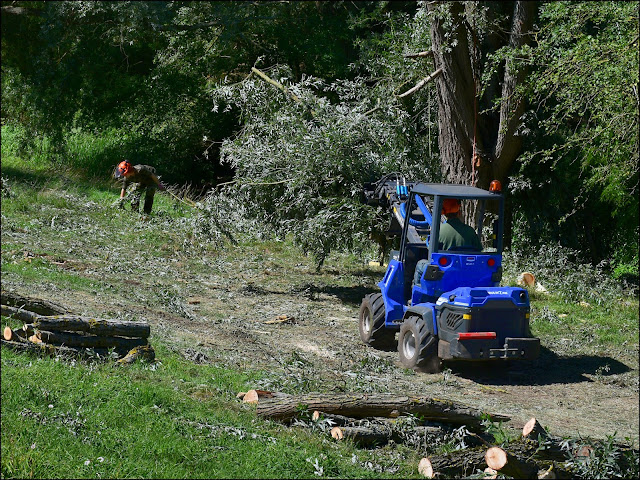 A little light forestry was taking place, removing some branches from the willow trees. 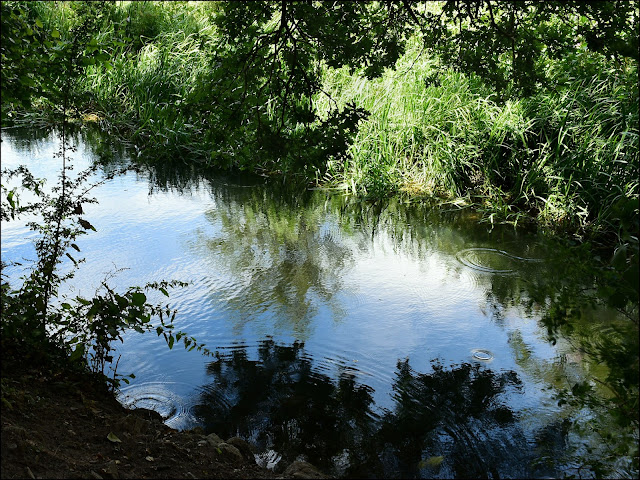 Although the path is right alongside the river, glimpses of it are few and far between as there's a kind of hedge running between the two. 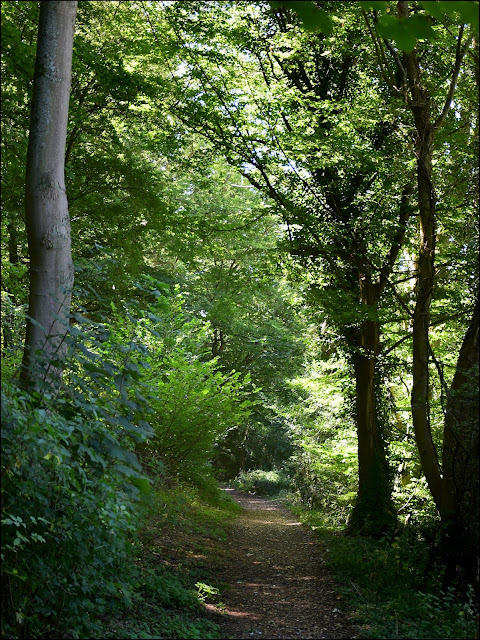 The path then enters Clusterbolt Wood, though still closely follows the river. In Spring this wood is thick with flowers of Ramsons (Wild Garlic) - you won't need anything other than your nose to identify it! 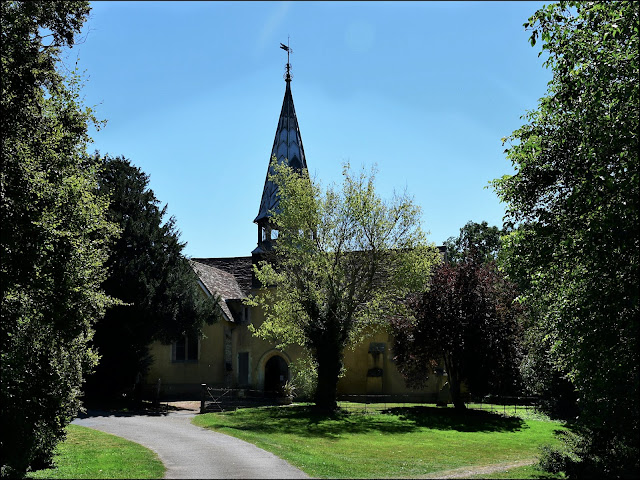 The tiny village of Stapleford stands close to the river and has a rather attractive church, albeit one that always has its back to the sun. That's unusual; most churches are approached from their sunny south side. Incidentally, after a slightly cloudy start, the day had turned to one of unbroken sunshine - we seem to be getting more than our share of bright "Mediterranean" light in the south of England this year, though separated by damp, gloomy periods. 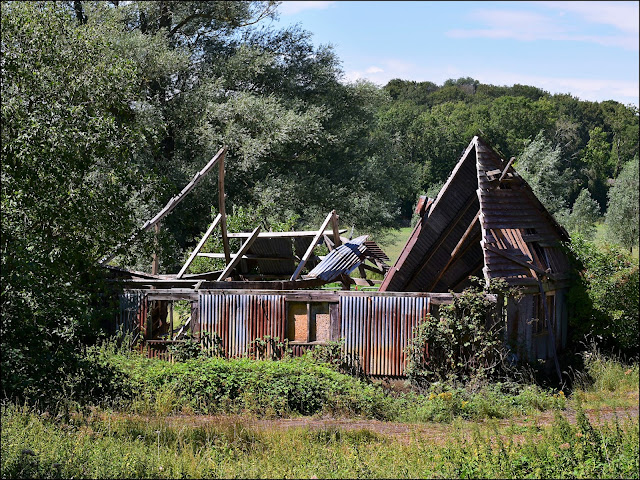 It's not all grand houses and perfect scenery - near Bullsmill this old wreck rather marred the view. 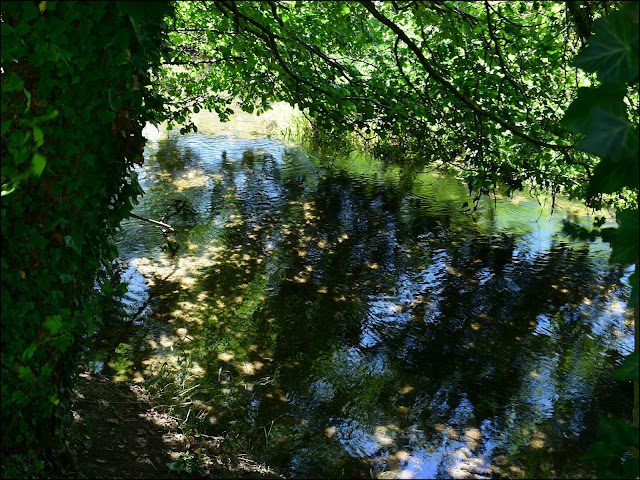 Then we're back down beside the river with sunlight and shadows dappling the water. 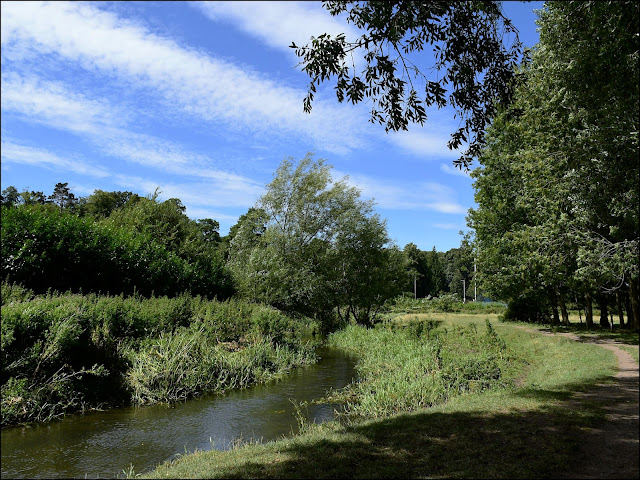 Just near Waterford there's an idyllic stretch of river, lined with green meadows, much favoured by young mums and their children on this beautiful afternoon. Just as we left the meadows I spotted what I thought was a butterfly but on closer observation turned out to be a Tiger Moth (an insect not an aeroplane!). All I could get was a rather fuzzy photo, but clear enough to identify it as a Jersey Tiger. At the time my insect book was published (2005) its range did not extend this far north, perhaps the effect of our recent spell of warm summers. 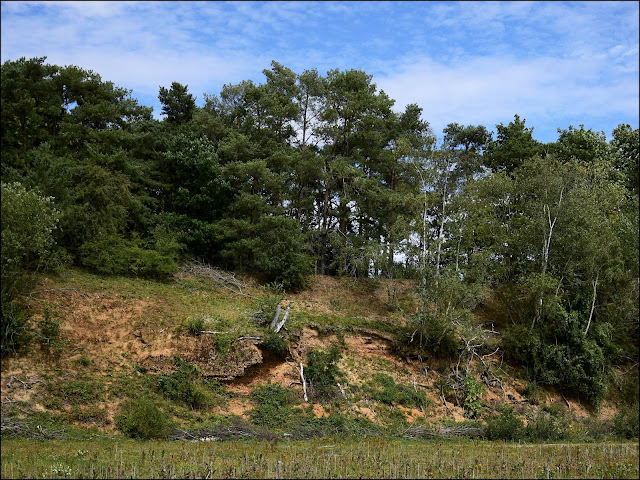 Then we're back in Waterford Heath nature reserve. Now where's that car park?
Take care.
Posted by John "By Stargoose And Hanglands" at 15:56