Off to the Fens today in search of some very special birds. We'll start off at a place called Welches Dam on the Old Bedford River. 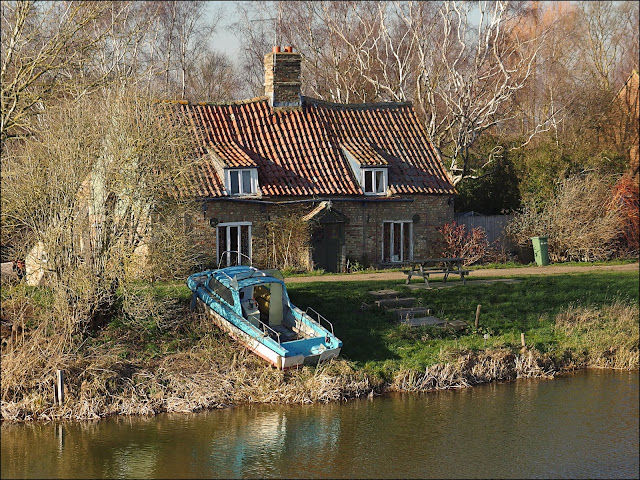 The Old Bedford River isn't really a river and it's nowhere near Bedford! It's actually a dead-straight drainage channel which dates from the early seventeenth century and was named after the Duke of Bedford, who was one of those who backed the scheme. It was an attempt to drain part of the Fens by getting the waters of the River Ouse more rapidly to the sea by straightening its course. 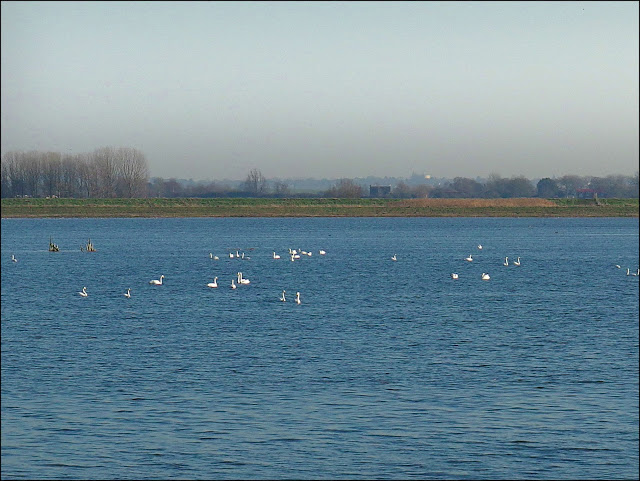 Like every earlier attempt to drain this flat landscape it was partly successful, but then led to flooding elsewhere. Another channel, parallel to the first and imaginatively named the New Bedford River, was built a few decades later with the land between the two, half-a-mile wide and twenty-two miles long (0.8 Km x 35 Km), being allowed to flood in periods of high rainfall. 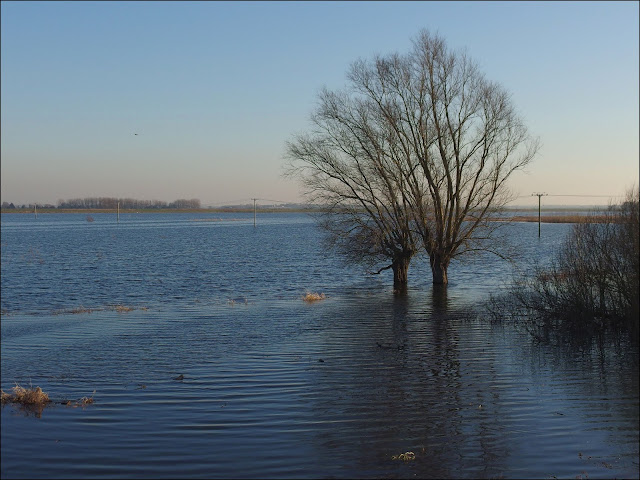 It still serves this vital role today, and also provides a home for thousands of wintering, migrating and nesting wildfowl and waders. However when water levels are as high as this the birds are often very distant from the RSPB's hides. Time to get in the car and head a little further north.

The roads around here can be "interesting". Despite the flatness of the landscape the roads are often wildly uneven. They travel in ruler straight lines, frequently alongside unfenced drainage channels, but then make unexpected right-angle turns, for no obvious reason, in the middle of nowhere. Slow, careful progress is the order of the day, which means that the passenger can lean out of the open window and take photos of the overflying Whooper Swans. 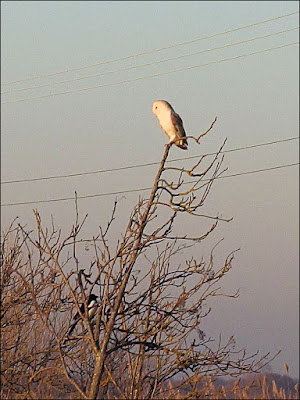 You might even spot an early Barn Owl at the side of the road. As you get close it languidly takes to the air and settles a hundred yards or so further on, without apparently realising that this just means it's going to have to move on again a few seconds later. On one of these short hops our owl spotted a mouse or vole in the grass and swooped down. But no sooner had it made its catch than a Sparrowhawk sped in from stage left, grabbed the prey and, after a short tussle, left the owl supperless. This is behaviour I've never witnessed before. 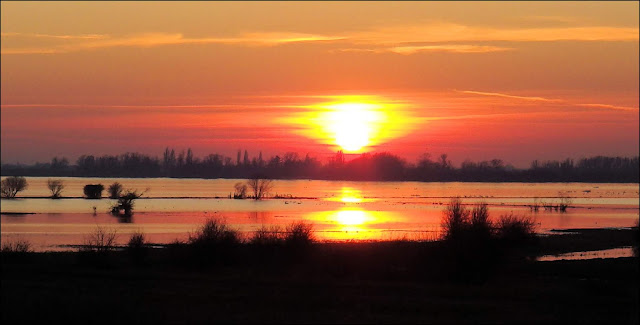 We crossed the floodplain on the Wash Road and stopped to photograph a blazing Fenland sunset. I love these flat horizons and huge skies, but there are those who find them depressing and disorienting - a correspondent of the writer Robert Macfarlane has coined the marvellous term "horizontigo" to describe this distressing condition! 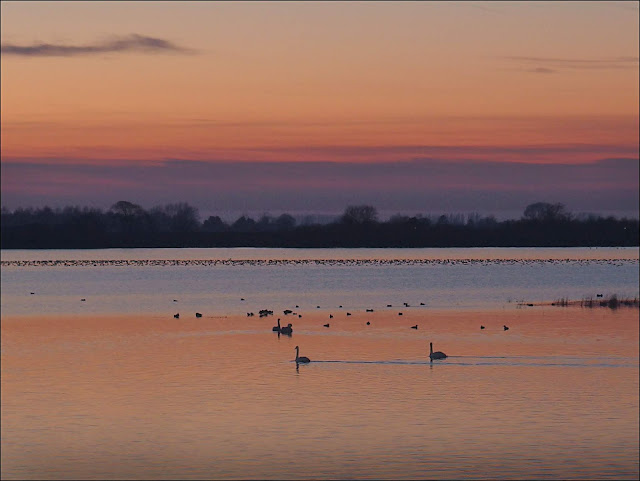 You might expect photos of the sunset to signal an end to the bird-watching day, but we're heading to the Wildfowl And Wetland Trust's centre near Welney where there's a pleasant café. The only other customers when we arrived were two policemen who may have been expecting a sudden crime wave or were more likely just availing themselves of a cup of tea and a large slice of chocolate cake - just like us! 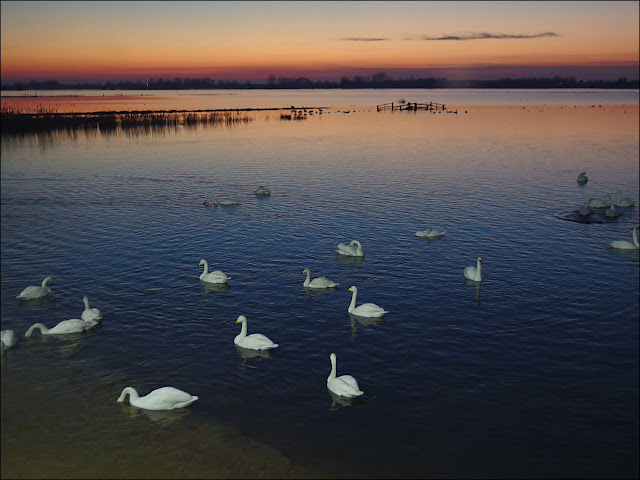 Suitably fortified we made our way across to the luxurious heated bird observatory to enjoy the last lingering glow of twilight. 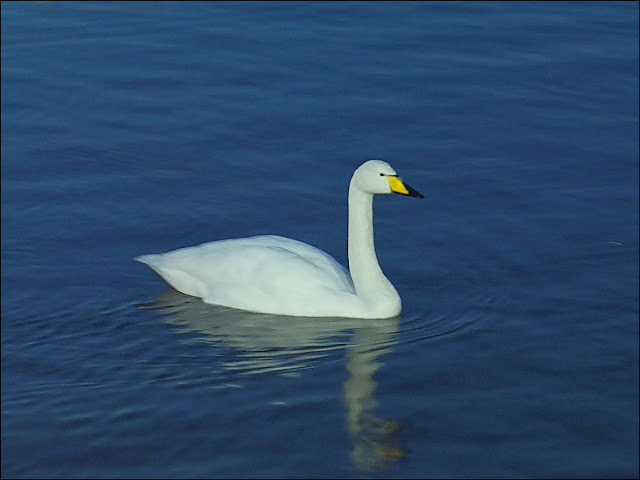 Here at last we could enjoy close views of the Whooper Swans. These are migratory birds that nest in remote parts of Iceland then fly over a thousand miles, much of it over the North Atlantic, to spend their winters here on the East Anglian Fens. 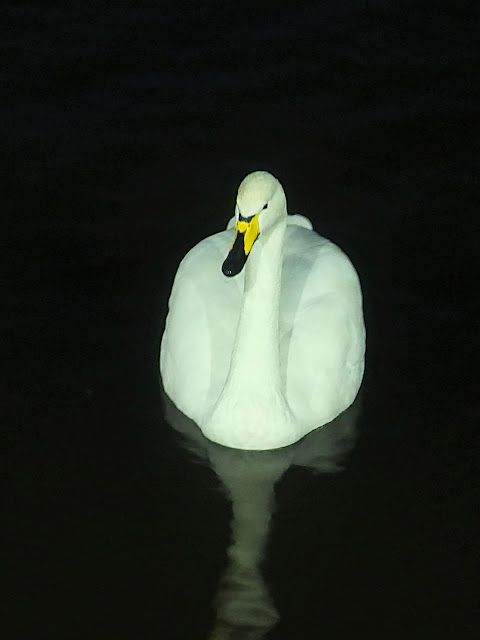 As darkness falls the swans gather expectantly in front of the Observatory. As they mill about you can spot family groups and watch the birds' behaviour - mostly misbehaviour, I suppose - as they squabble and honk at each other. 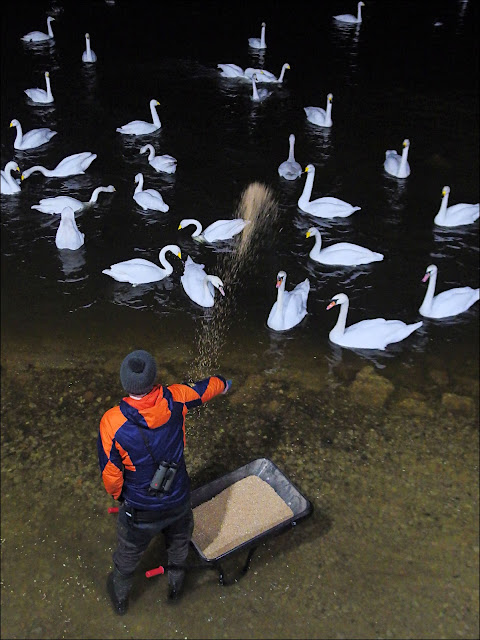 What they are waiting for is the warden to feed them grain from his wheelbarrow. This supplementary feeding is not really necessary for the birds' well-being - they find plenty to eat out on the fields - but these floodlit swan feeds are a popular attraction, raising money for the Trust's work and giving us the chance to see these beautiful birds. 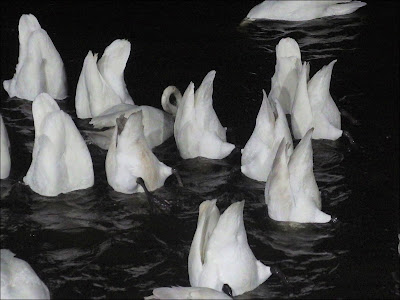 Posted by John "By Stargoose And Hanglands" at 10:32