"All Made Up Of Wonders"

"All made up of wonders" is how the world was described by Olaudah Equiano in a book published in 1789. The book was widely read in its day despite the snappy title of "The Interesting Narrative of the Life of Olaudah Equiano, or Gustavus Vassa, the African, written by himself" . It describes his life as a boy in Africa, his kidnapping, transportation to the West Indies, where he was sold as a slave, then on to North America and England. As a slave he experiences terrible treatment and occasional kindness, but it is not the kindness which prompts the "all made up of wonders" description, the wonders are things like watches, paintings and books which fascinate his young mind. In time he manages to learn English, gain some sort of education and converts to Christianity. 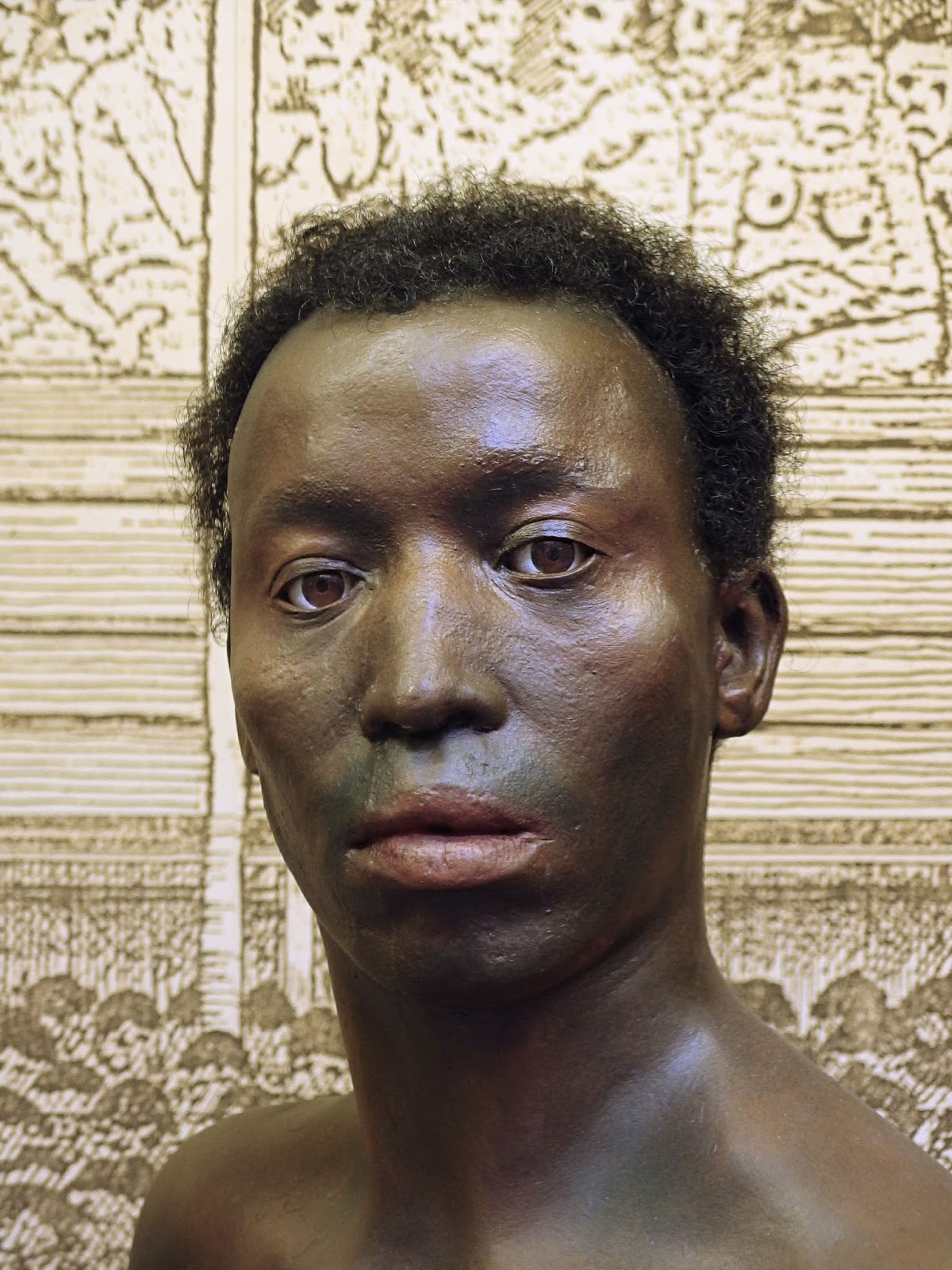 The picture above is a waxwork of Olaudah Equiano which is to be found in the Museum of Wisbech, Cambridgeshire. What's he doing in there? 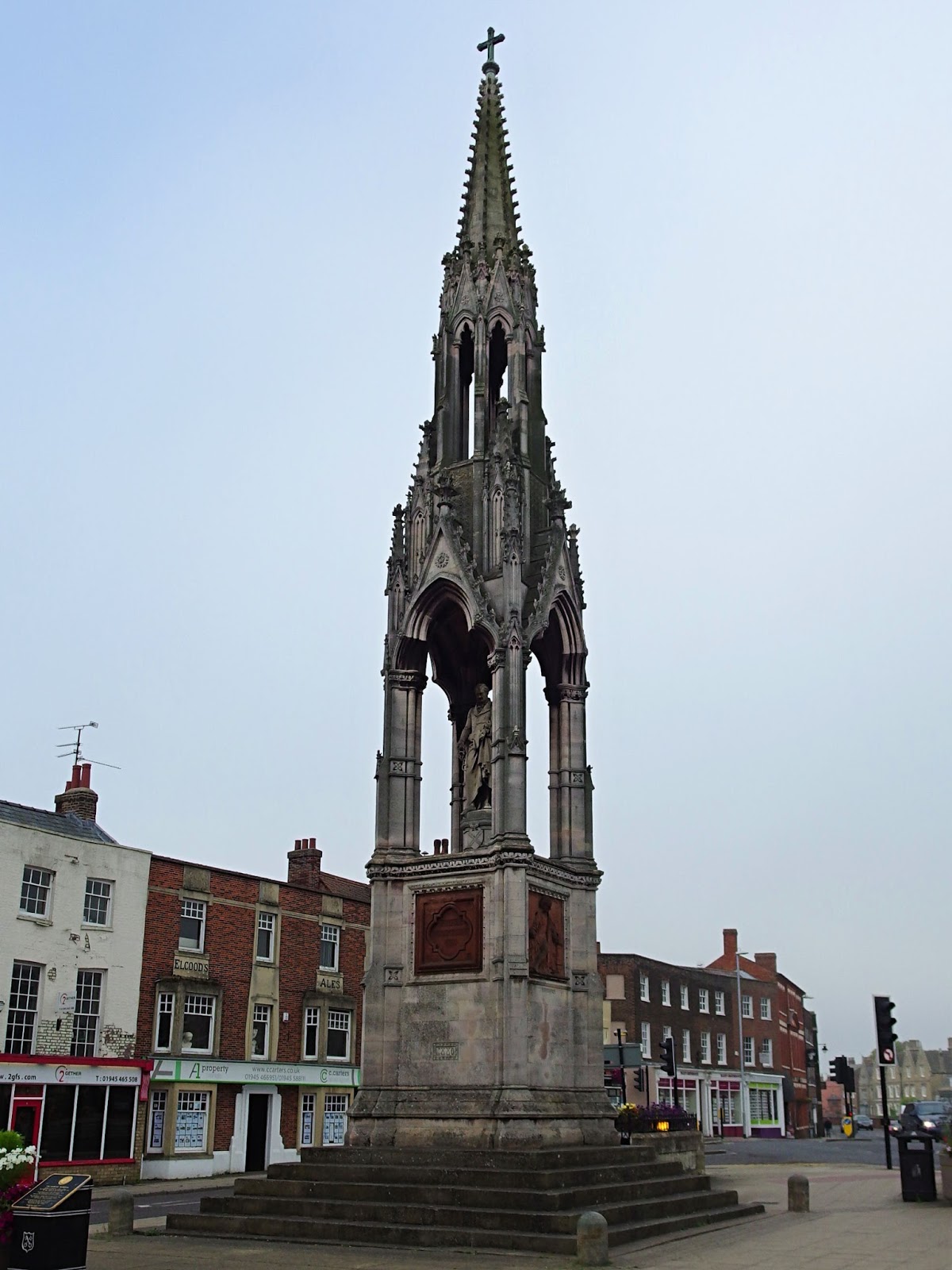 Well, Wisbech just happens to be the birthplace of one Thomas Clarkson and this fine monument to him stand near the market. (If you think it looks a bit familiar it's by Sir George Gilbert Scott who also designed the Albert Memorial in London and was not above re-cycling some of his design ideas). 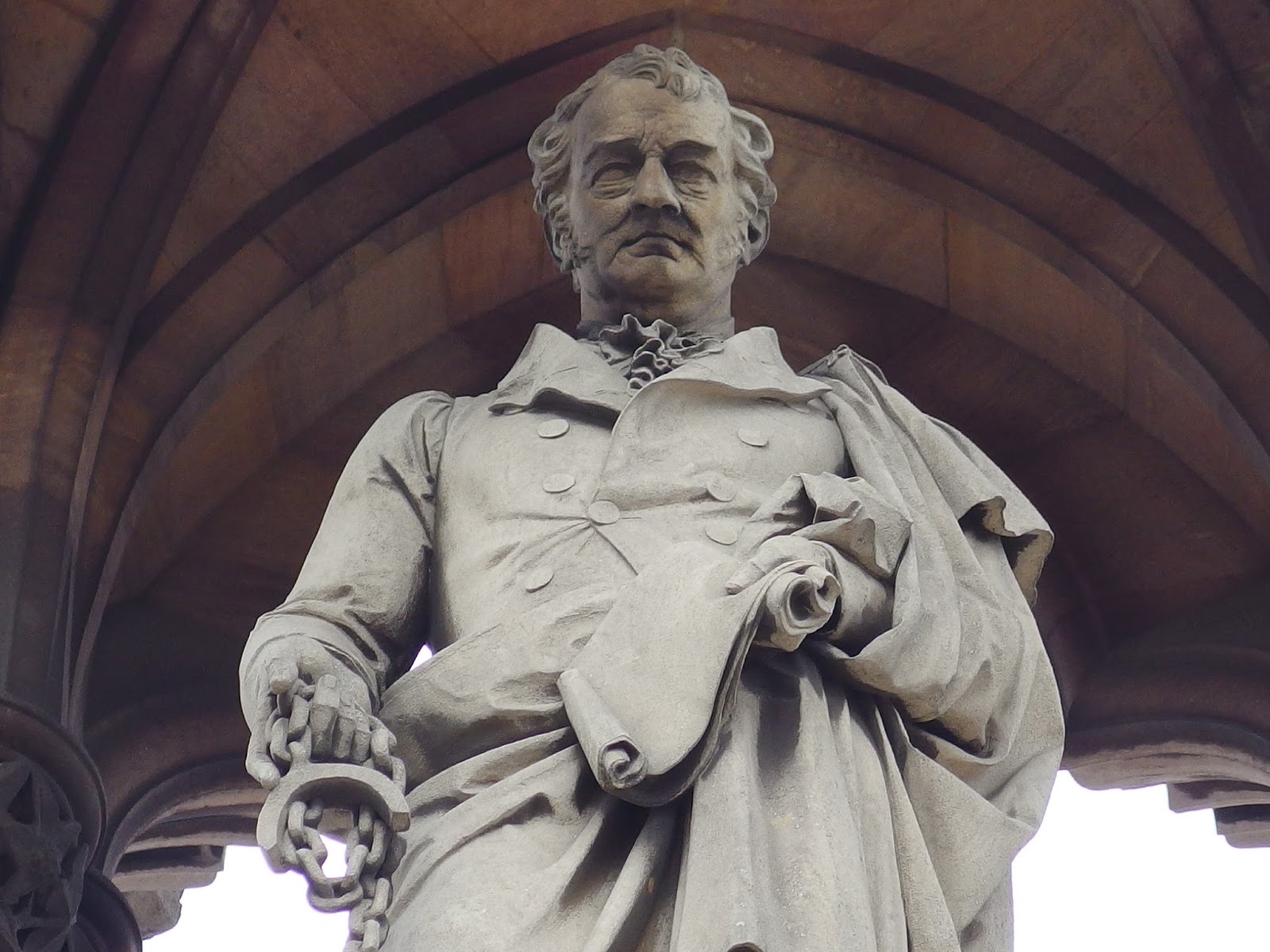 Clarkson was a man with a single idea which he pursued relentlessly throughout his life. That idea was the abolition of slavery. He is depicted above with a symbolic set of manacles. Also depicted on the memorial are.... 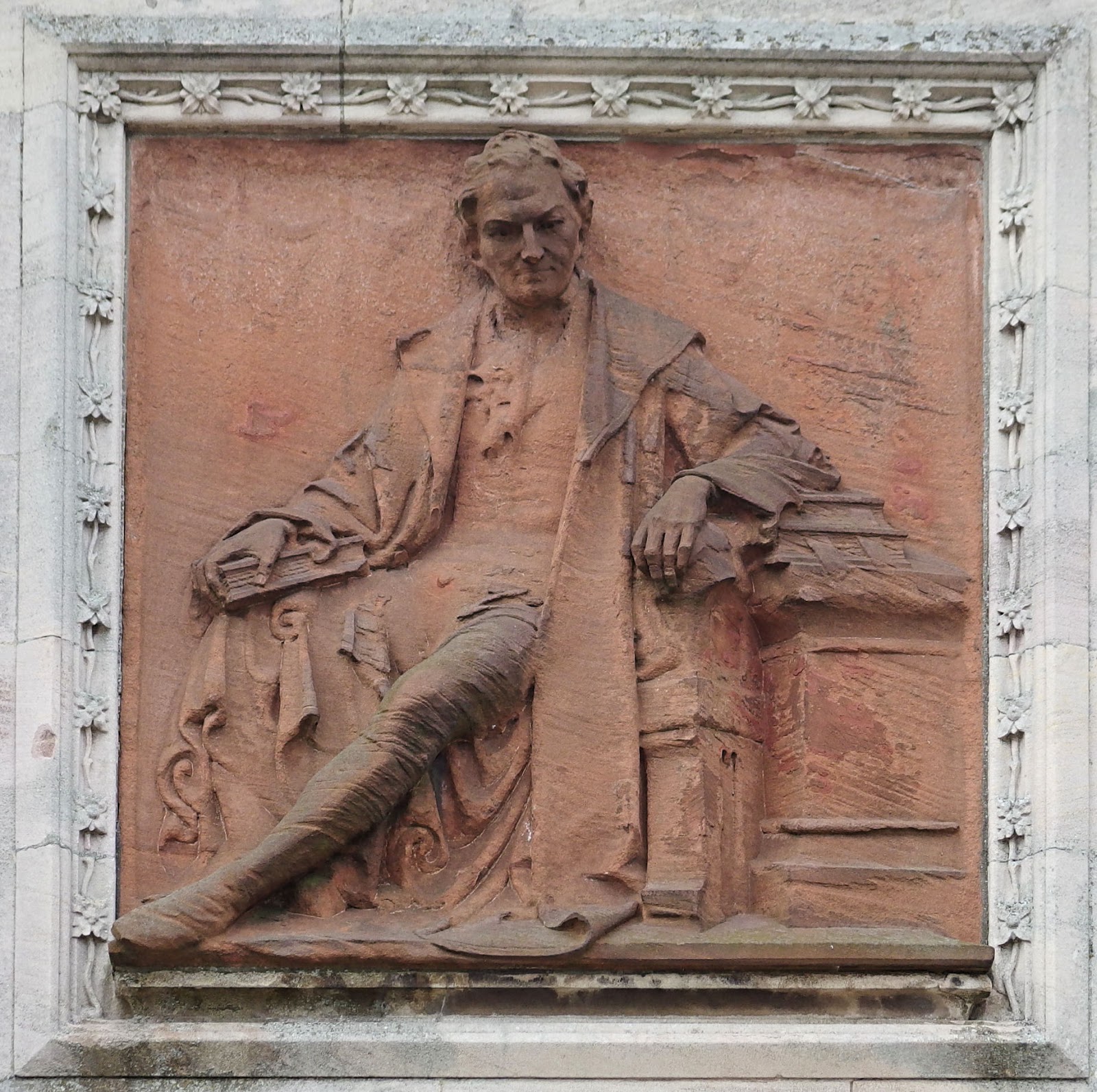 ...William Wilberforce, MP for Hull, who helped push the anti-slavery legislation through parliament. Wilberforce was educated at Cambridge University where he combined his learning with gambling, drinking and socialising. In terms of his eventual success in banning slavery the hedonism may have been more important than his studies as through these late-night sessions he became great friends with future Prime Minister, William Pitt and other influential individuals. 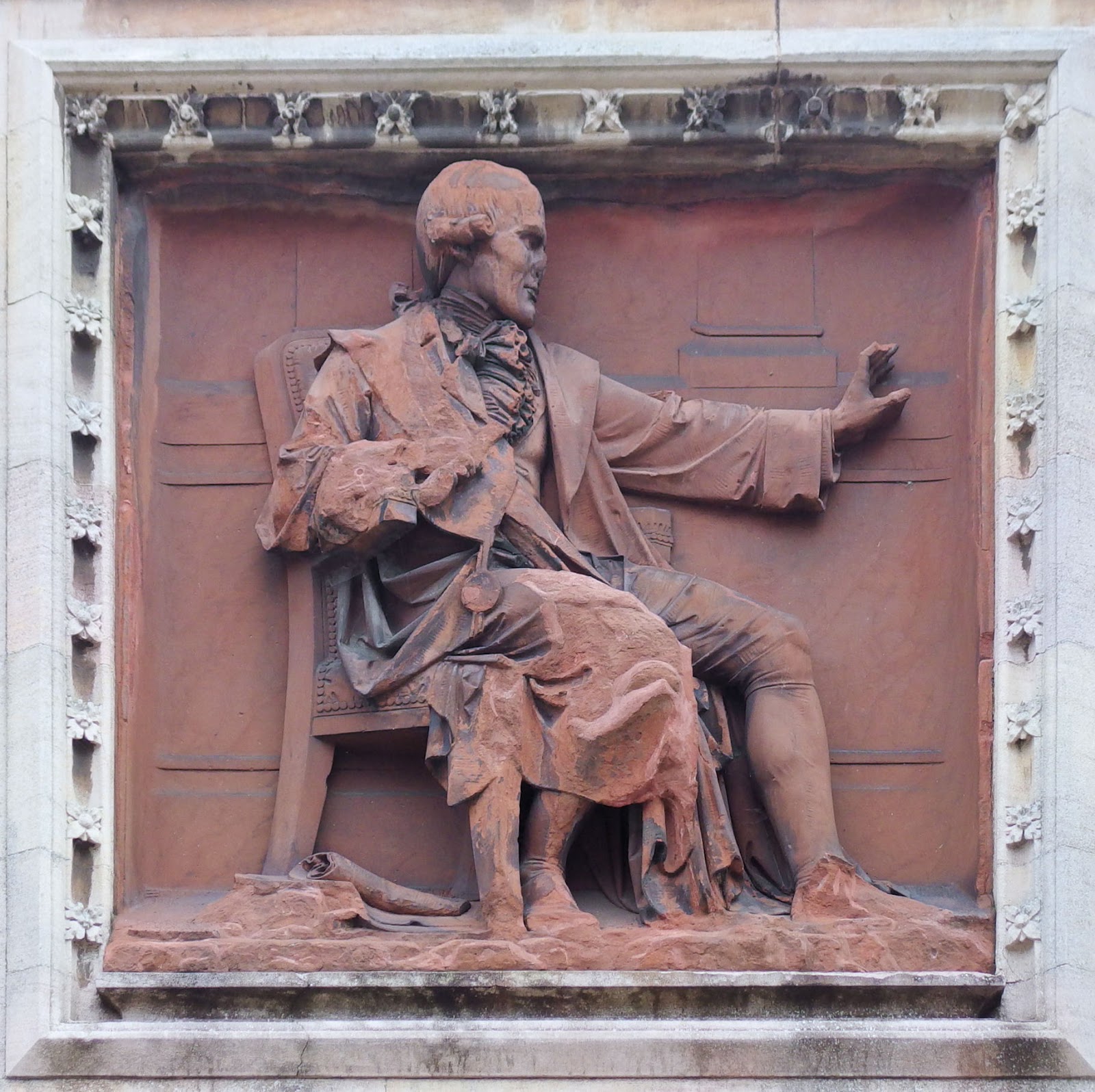 Granville Sharp. Sharp came from a family of eminent churchmen but was mainly self-educated, teaching himself the Greek and Hebrew languages and English Law. He was a great fighter for the rights of the underdog.

And there's also a depiction of a kneeling slave... 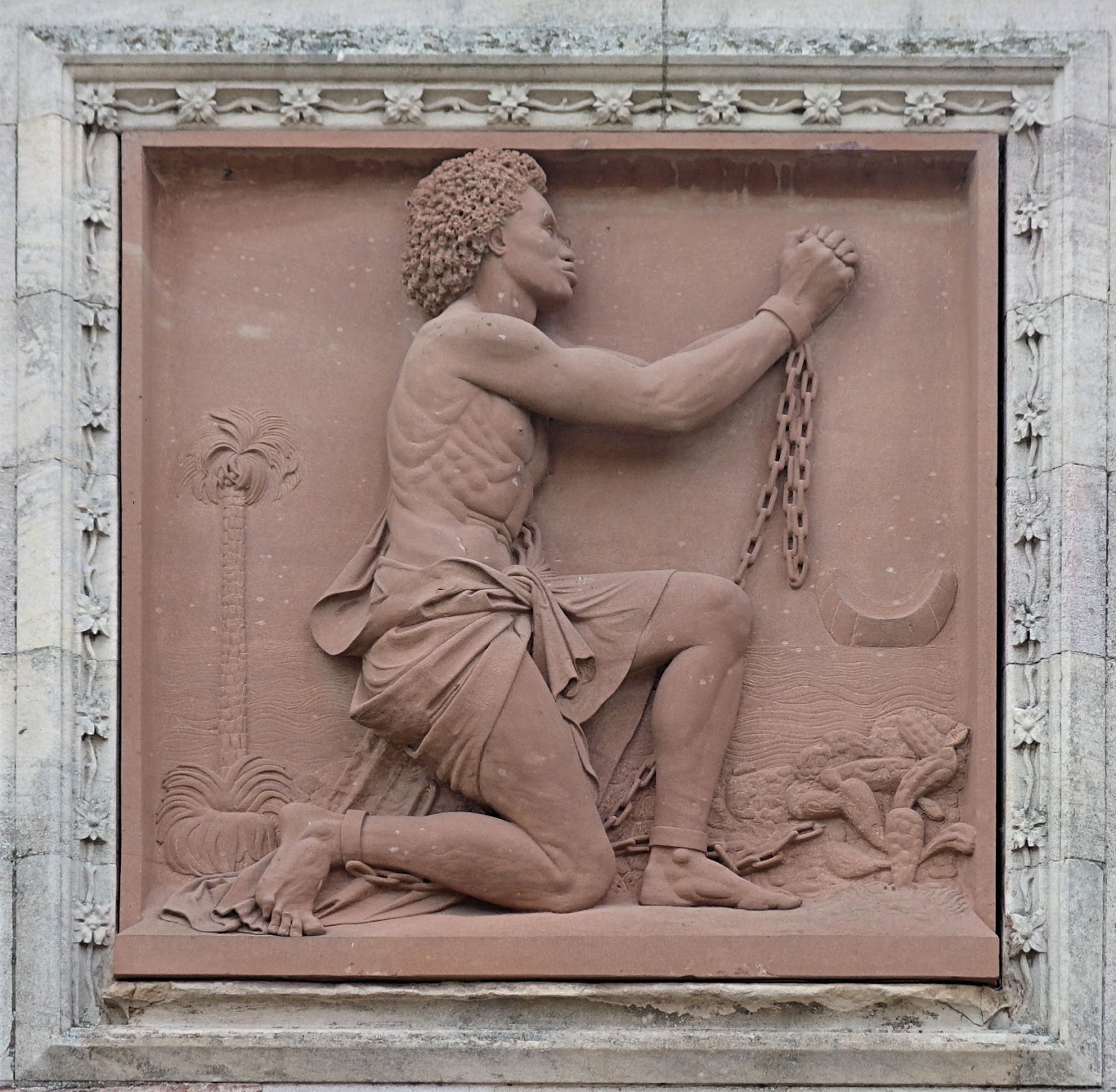 The manacles which Clarkson is holding are not merely symbolic; he collected manacles, whips and thumbscrews to illustrate his talks. These were kept in a small chest which can also be seen in Wisbech Museum.... 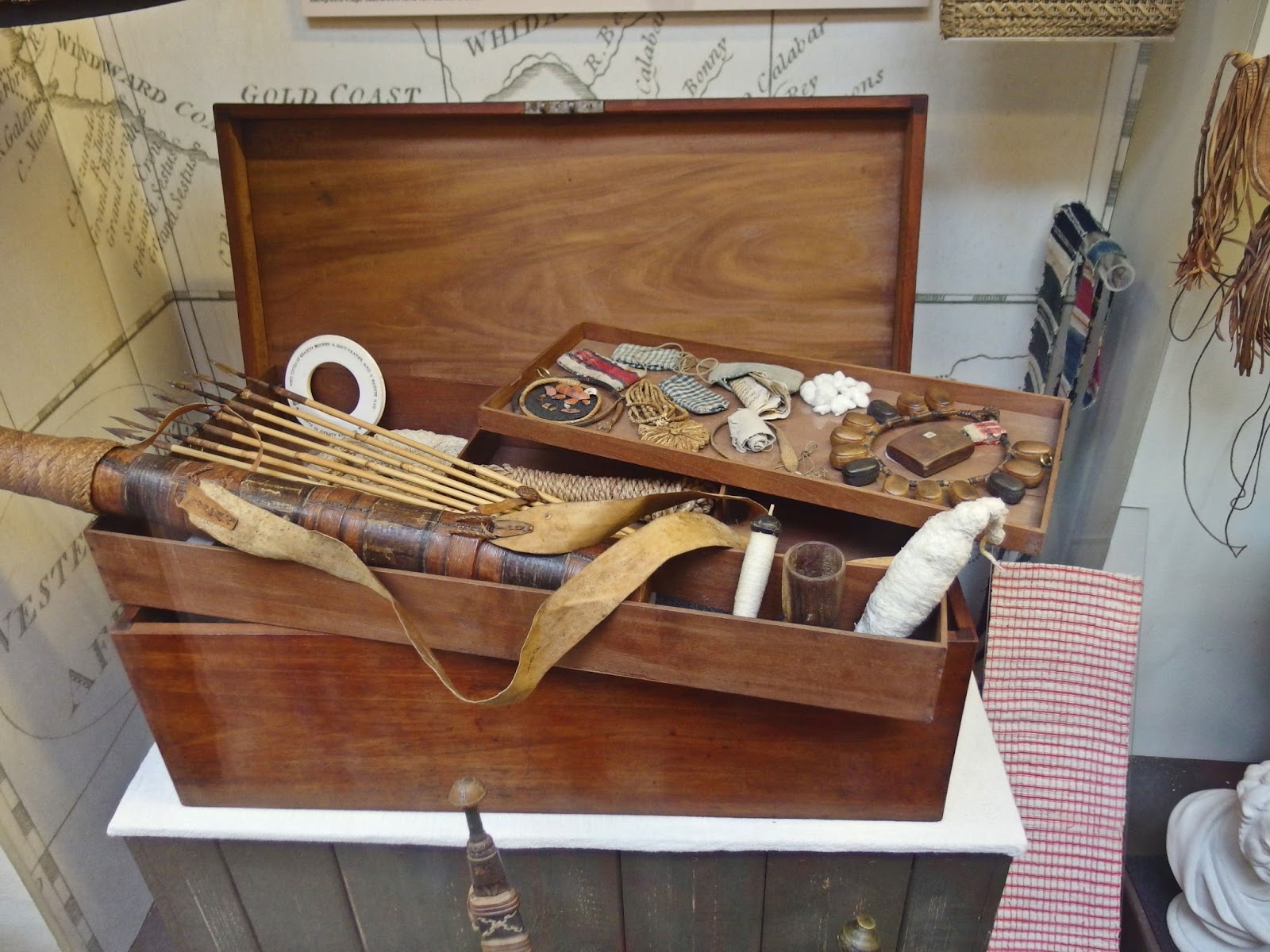 .....as you can see it also contained other craft goods with which he hoped to prove that it would be better to trade with Africa. But still there was an enduring belief that Africans could not be educated. Olaudah Equiano's narrative did much to dispel this notion as well as being a first-hand account of the realities of slavery. (If you want to read the book it's still in print, or, if you've got a Kindle, you can download it for the princely sum of £0.00)

Yes, but apart from reading the book, what's got old John thinking about the abolition of slavery? 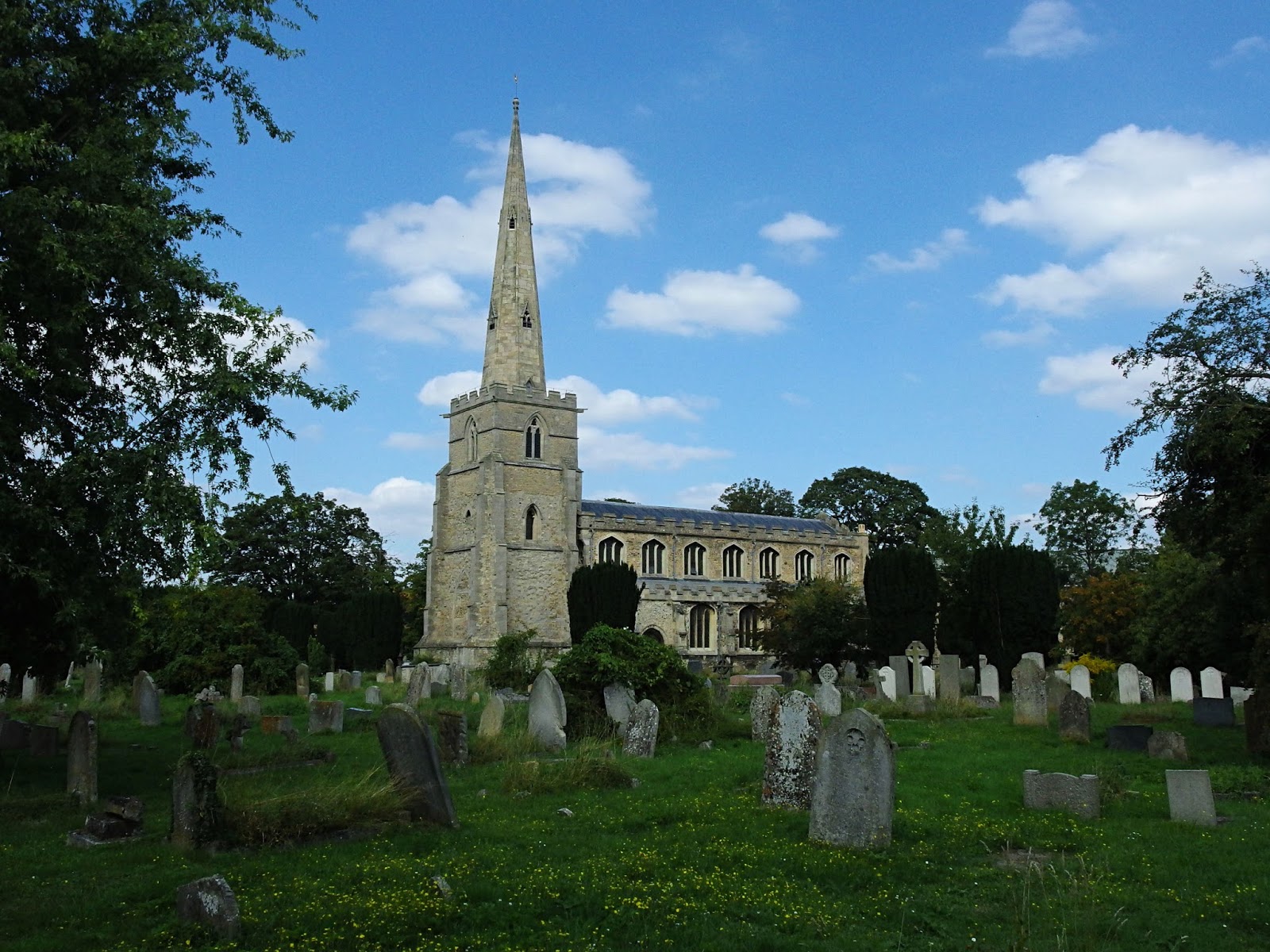 This is St Andrew's Church in the Cambridge suburb of Chesterton. I went there to see some medieval wall painting. 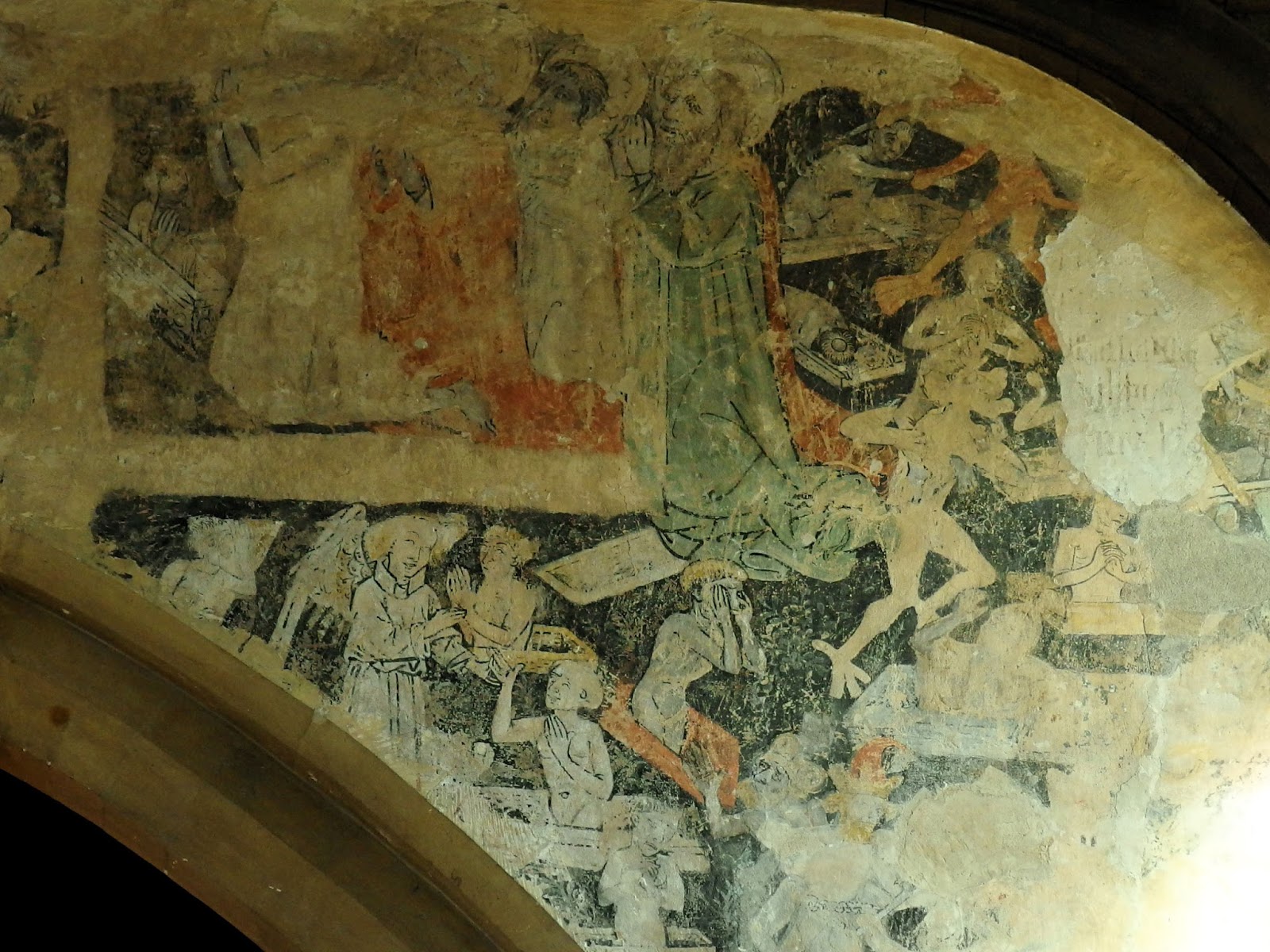 But while there I also had a look around the outside of the building and spotted this plaque: 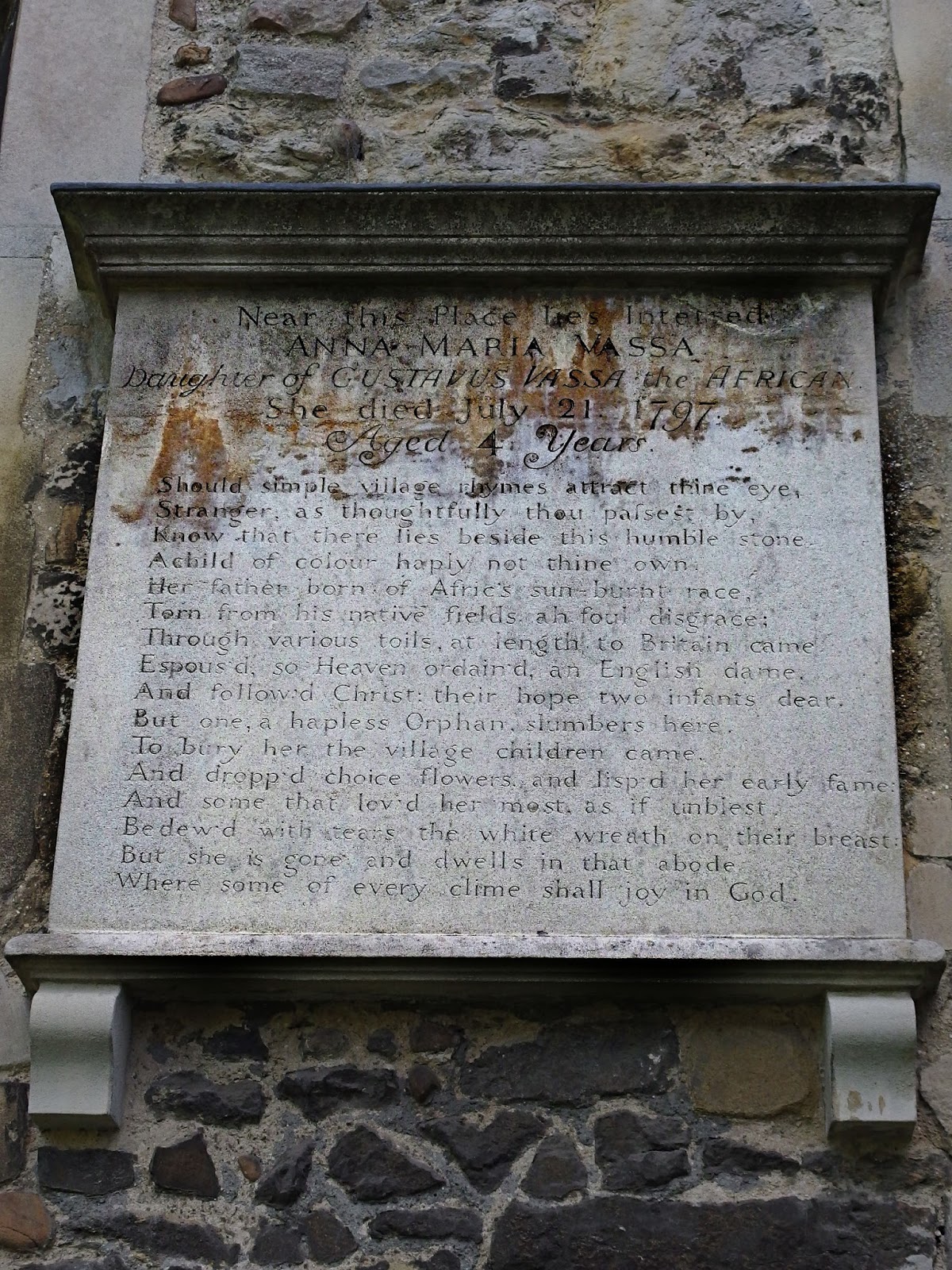 To save your eyes it says this...

"Should simple village rhymes attract thine eye,
stranger, as thoughtfully thou passest by,
know that there lies beside this humble stone
A child of colour haply not thine own.
Her father born of Africa’s sunburnt race
Torn from his native fields: Ah! Foul disgrace.
Through various toils, at length to Britain came,
Espoused, so heaven ordained, an English Dame
and followed Christ; Their hope two infants dear,
But one, a hapless orphan slumbers here.
To bury her, the village children came,
And dropped choice flowers, and lisped her early fame,
And some that loved her most as if unblest,
Bedewed with tears the white wreaths on their breast
But she is gone and dwells in that abode
Where some of every clime shall joy in God” 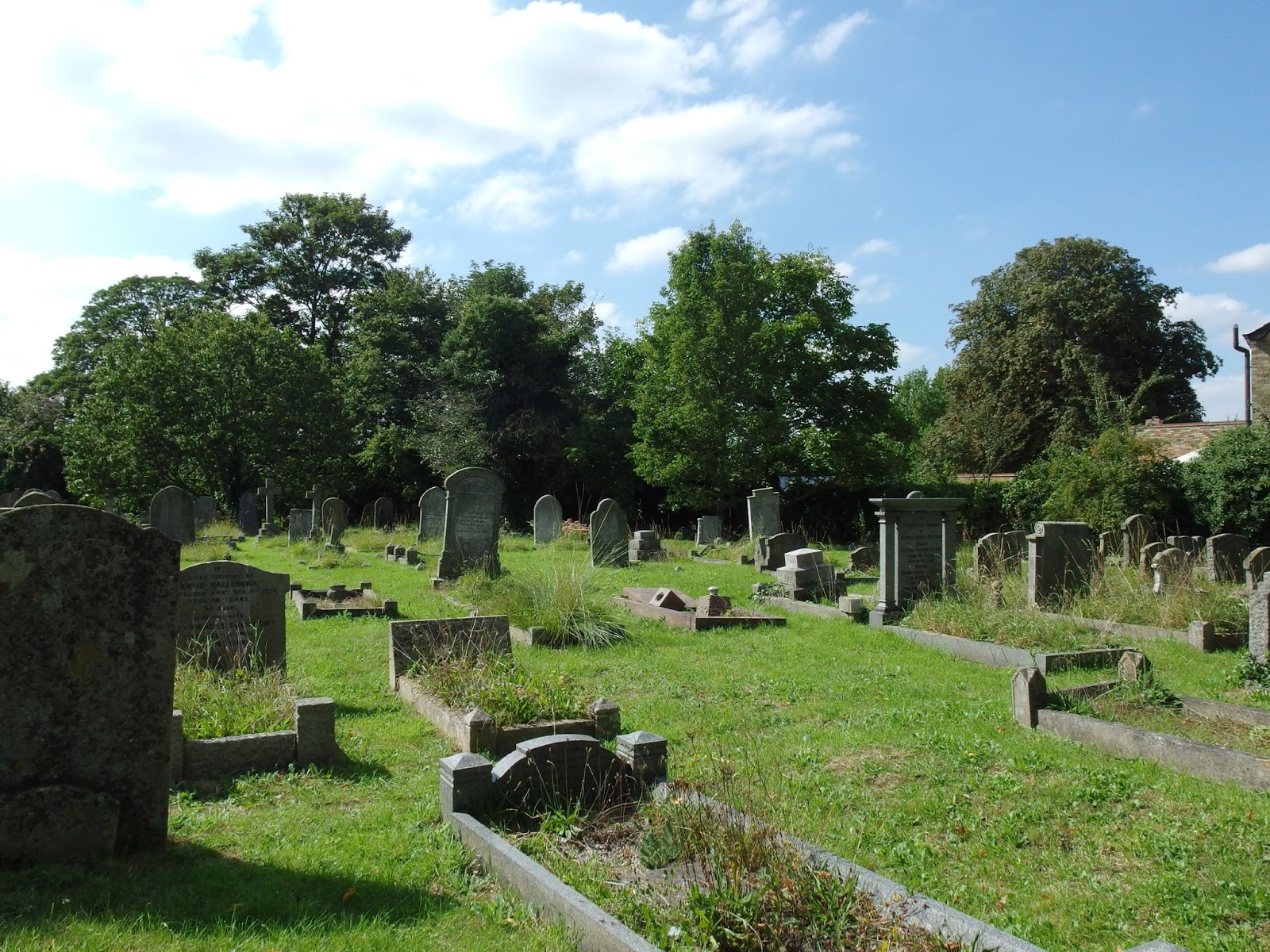 Olaudah Equiano, or Gustavus Vassa as he was known in England, went on to marry an Englishwoman, Susanna Cullen, from Soham in Cambridgeshire. They had two daughters, Anna Maria and Joanna, but both parents died and the children were cared for in Chesterton. Anna Maria died shortly afterwards in a measles epidemic. On the Sunday nearest the anniversary of her death local children still lay a wreath of white flowers in her memory.

Posted by John "By Stargoose And Hanglands" at 08:40