Beside The North Sea

If you were here for my last post about wonderful Winterton you'll recall we were going to Horsey Gap to look for some seals. As we bumped down the track and into the car park we saw an encouraging sight - a woman in a high-vis jacket, carrying a bucket. The bucket was for donations and the bright yellow jacket indicated that she was from that excellent charity Friends Of Horsey Seals. And where there are Friends there will be seals.

"Many seals about?" we enquired. "Hundreds" came the reply.
Now this may look like some kind of Grey Seal orgy and in a way it is - an orgy of itching and scratching.
Having given birth to their pups between November and January, the seals return to the sea for a few weeks to feed up. Then they come back to this beach from late February to moult and grow a new coat for the next year.
The whole process takes about six weeks and they live off their reserves of fat during this time as they wait to regrow the protective waterproof layer.
Unlike when they are giving birth it's OK to go on to the beach at this time, as long as you stay at least ten metres away from them and don't do anything to scare them. They also get a lot closer to each other when they don't have young ones to protect.
Incidentally you sometimes see pictures of seals "waving" to the camera. It's adorable, isn't it? But what people don't realise is that this apparent friendly behaviour is actually the seal saying "Back off, mate, you're too close!". It's amazing what you can learn if you chat to the volunteer wardens.
They must be doing something right along this stretch of our coastline. In 2002/2003 there were about a hundred Grey Seals here and they raised perhaps 50 or 60 pups. The numbers have increased at around 10% each year and this past winter there were around 2,500 pups raised.
The seals come just far enough up the beach to get out of the water, which leaves plenty of room to wander along maintaining enough distance between you and them. These photos were of course taken with a long telephoto lens.
"If you're going to stick your tongues out at us, then we're leaving"
"Good, then we can get on with this tiring business of growing new coats".
Incidentally, we needn't have travelled to the coast in search of sand. This was the top of my re-cycling bin the next day...... 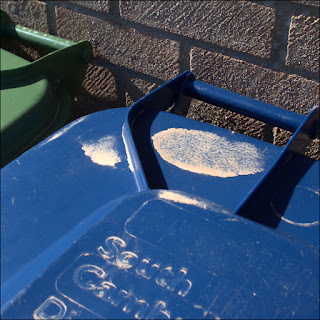 ....that's dust from the Sahara, picked up by the wind and then dumped on us by a passing shower, leaving a fine coating of sand on every surface. There's plenty on my windows too, if anyone wants a job.
Take care.

Posted by John "By Stargoose And Hanglands" at 06:40