Low Down And Dainty

When we visited Shepreth L-Moor Nature Reserve at the beginning of the year I was rejoicing that the rains had returned the water level to something near its normal levels. However the last month has been unusually dry - not too many April showers - so I thought I'd go and see how nature was faring in this little corner of England. 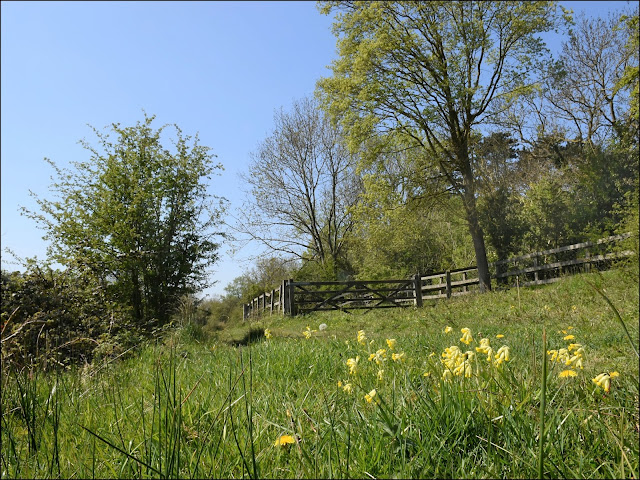 I've mentioned before that this "Moor" is not really a moor at all, but an area of undrained, or at least poorly drained, rough grazing land. In the past every village would have had these summer grazing lands which were too wet to farm in any other way. Most have been drained over the intervening centuries, which is a pity because they gave rise to interesting flora and fauna. 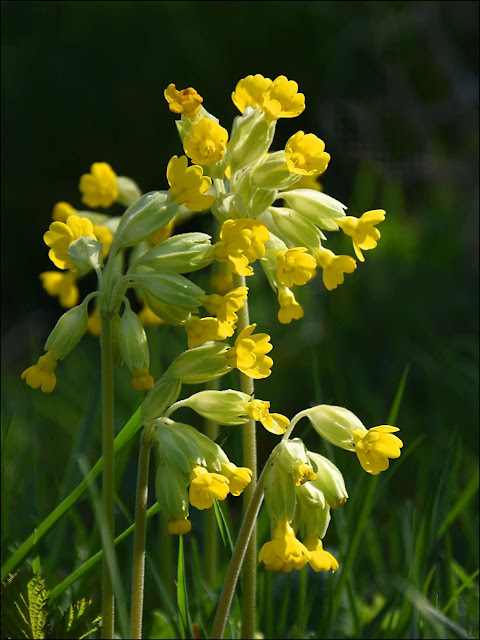 As you probably noticed in the first picture, it's quite a place for Cowslips and there's a good show of them again this year. 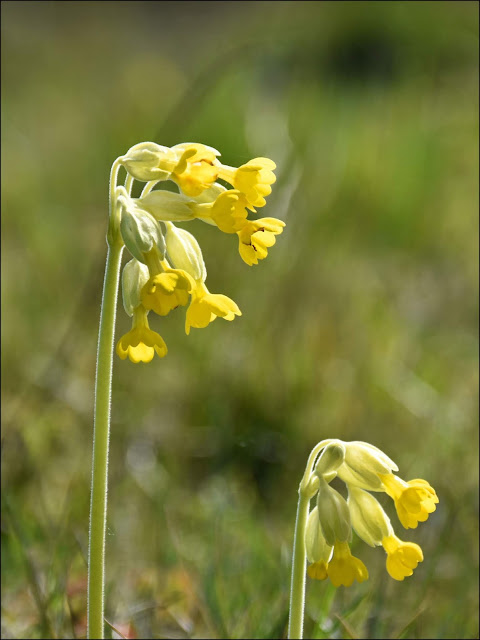 They have a whole host of folk names including Peggles, Paigles, and Culverkeys, which suggests that they were once a very common flower. "Cowslip", according to some authorities, once meant the fragrant and messy deposits which cows leave on the ground, though I prefer to think that the association is because they appeared at the same time as the cows on these summer pastures. 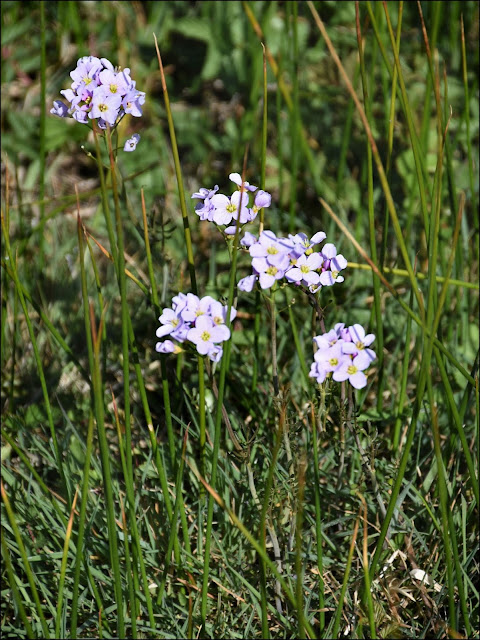 Another common flower of meadowlands is the Lady's Smock or Cuckoo Flower. Again it has many common names, but I once heard them called Milkmaids and that somehow has lodged itself in my mind, perhaps because they appear at the same time as the cowslips, as milkmaids and their cows would have done. 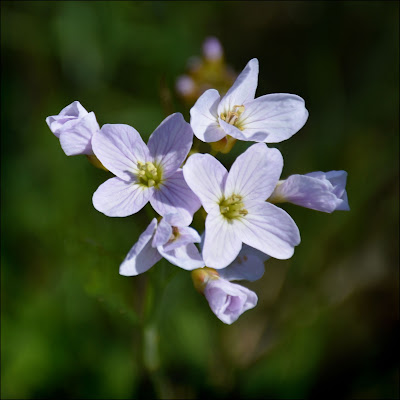 The old folk songs of Southern England are full of milkmaids and ploughboys meeting in meadows:

"Where are you going to, my pretty fair maid,
With your red rosy cheeks and your long black hair",
"Going a-milking, kind sir," she said to me,
"Rolling in the dew makes a milkmaid fair".
Over the ensuing verses the young man makes it clear that he's quite keen on the "rolling in the dew" idea. The milkmaid doesn't seem averse to the suggestion either, but has thought things through more fully than her suitor, for she makes it clear that, should a baby be the result, he'll jolly well have to marry her and provide for the family. Whether he's still so keen, once confronted with his responsibilities, we never learn because the song ends there. 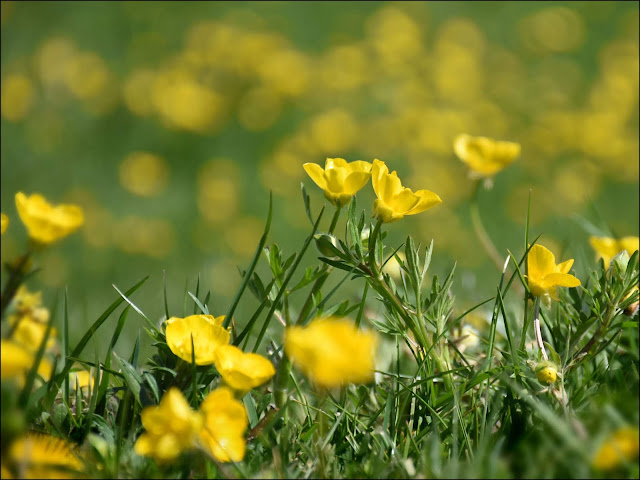 Buttercups continue the dairying theme perhaps, and even they seem to be stealing a kiss on this sunny morning. 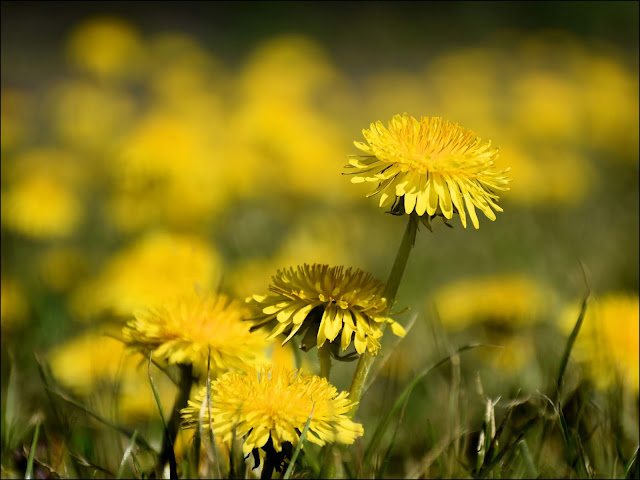 Around the drier edges there are good shows of Dandelions. Goodness knows where lions fit into our story, so perhaps we'll leave it there. 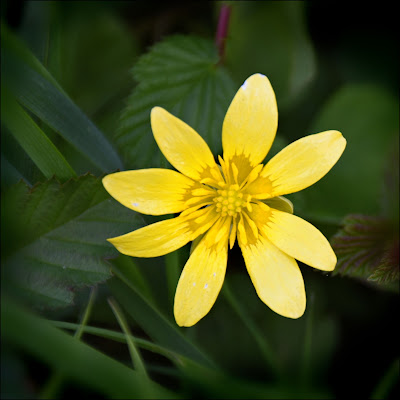 Lesser Celandine has mostly disappeared by now, though here there's a small cluster of them still sparkling forth, like golden stars, in the shadows. It must be at least six weeks later than the rest of its clan. It was William Wordsworth's favourite flower and he wrote three poems about it. It was decided appropriate to have one carved on his gravestone, but unfortunately the stonemason carved the unrelated flower, the Greater Celandine. 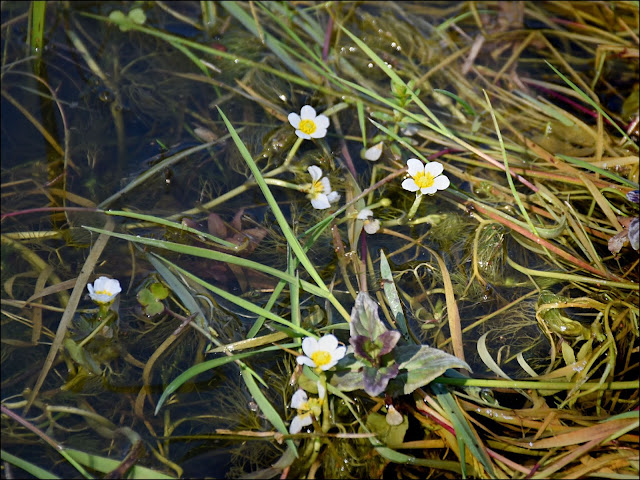 These meadows have dried out to such an extent that I could only find a single area of standing water and here were just a few flowers of Water Crowfoot. There may well be more in the brook which runs alongside; I didn't check. 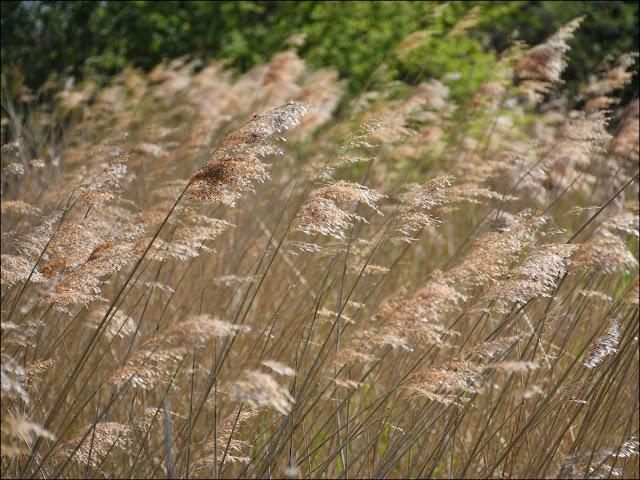 There's just a small stand of old reeds beside Guilden Brook in one corner of the area, and of course I couldn't resist photographing them. 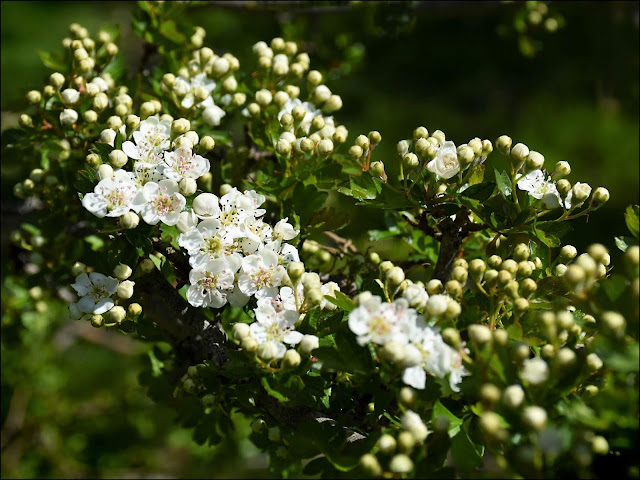 Although it's still April, some May (or Hawthorn flower) is already blooming and it's heady scent was attracting a number of insects. 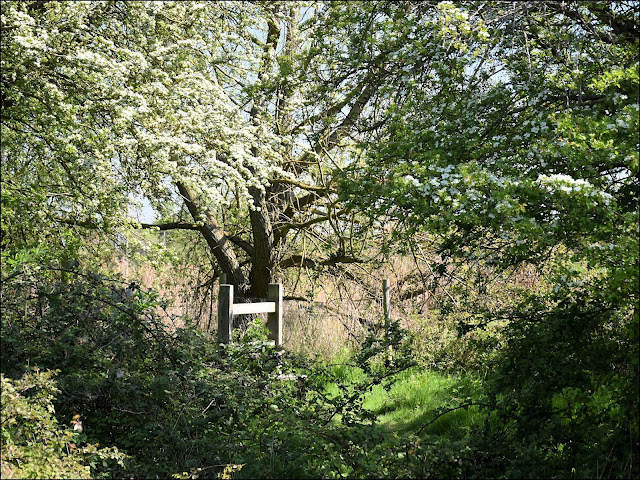 Later in the year there should be more flowers blooming here, including a few small wild orchids. It looks as though I'll have plenty of time on my hands to investigate, photograph and get thoroughly confused by them in the coming months.

******
For today's music I should really have a song about "the meadows so green", but instead we're heading north, up to Northumberland, to hear from one of my favourite musicians, Kathryn Tickell playing her Northumbrian Small Pipes. They make a much sweeter, more refined sound than other bagpipes and the tune she's playing here, Rothbury Hills, is a beautiful melody which recalls to me the days when I used to lead groups of walkers in the hills that surround the Coquet Valley.

It may sound like an ancient air but it was actually written by Jack Armstrong (1904-1978), official piper to the Duke of Northumberland.

Posted by John "By Stargoose And Hanglands" at 08:58