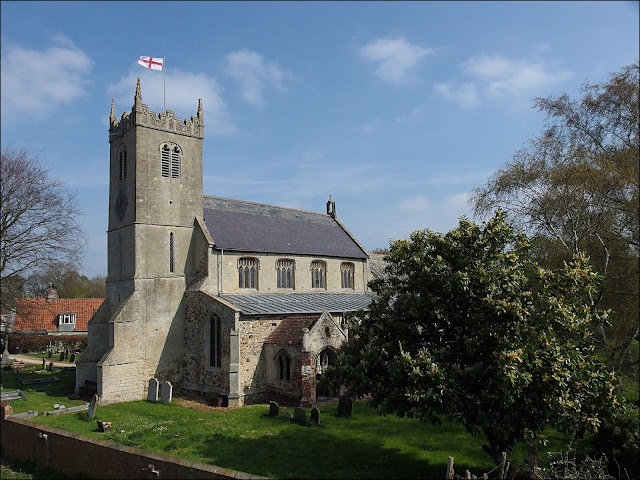 Just over half-a-mile north of the ruined church at Wiggenhall St Peter, stands a church that is more complete and a village with an even longer name - Wiggenhall St Germans. 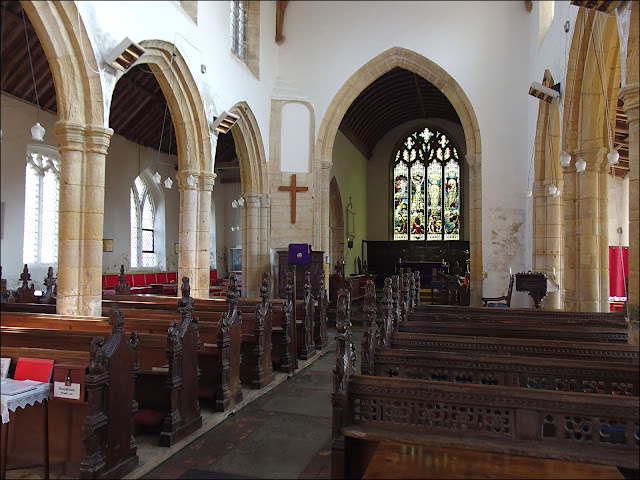 St Germans has nothing to do with our Teutonic brethren but gets its name from St Germain, who was Bishop of Paris back in the Sixth Century AD, and to whom this church is dedicated. Perhaps this is a reminder that these villages, which today seem an isolated backwater, were once closely connected via trade to mainland Europe. 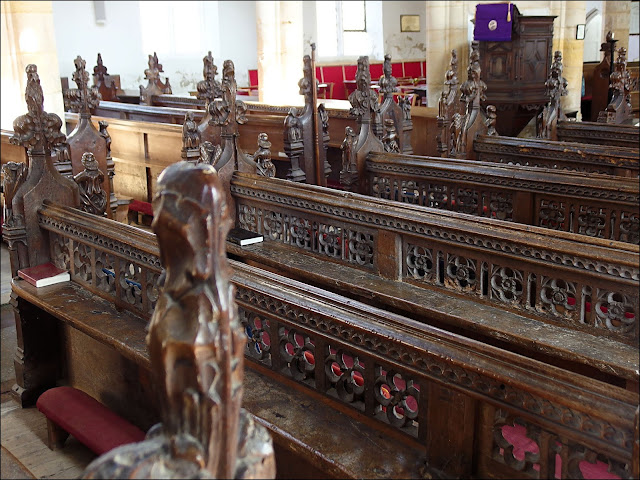 Although St Germans has many delightful features that crop up again and again as you investigate our wealth of ancient churches, it has one treasure that will stop anyone in their tracks as soon as they enter - row upon row of ornately carved pews. 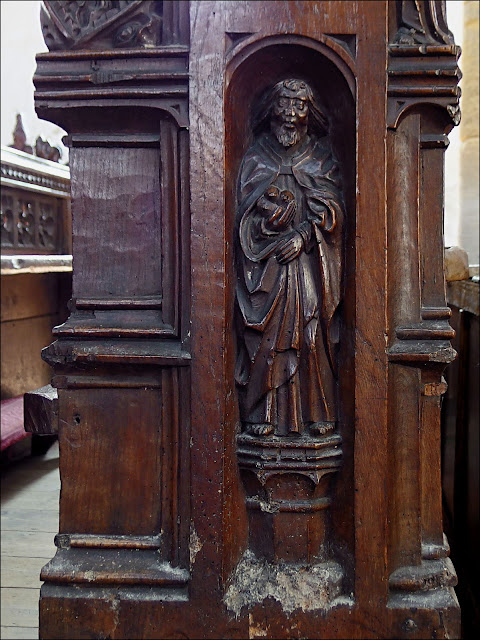 Back in October we looked at the "Mythic Beasts And Angels" carved on the bench ends at the church in Swavesey, but these at Wiggenhall St Germans are on a different scale altogether. At Swavesey there were small carvings on each pew, whereas here the whole bench is decorated. 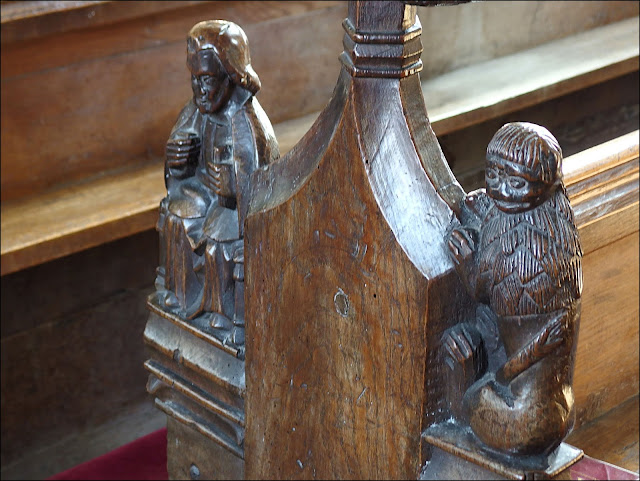 Some of the carvings are excellent Victorian reproductions, but many more date back to the fifteenth or sixteenth centuries. 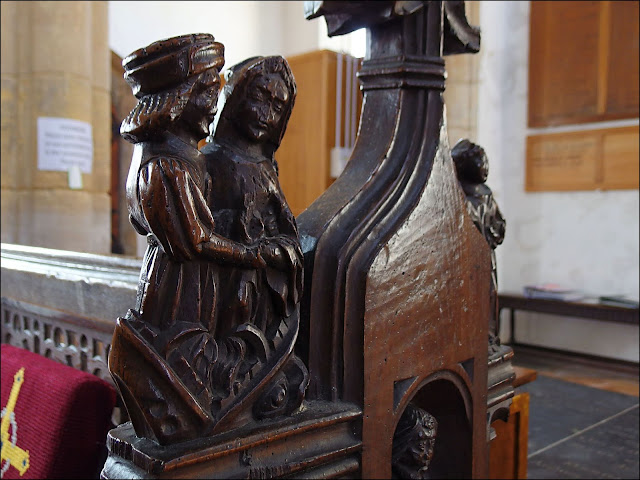 The whole range of Medieval subject matter is here somewhere - saints, evangelists, the seven deadly sins, the seven sacraments as well as some rather quirky animals, though some of the sets are incomplete and some seem to be muddled up. 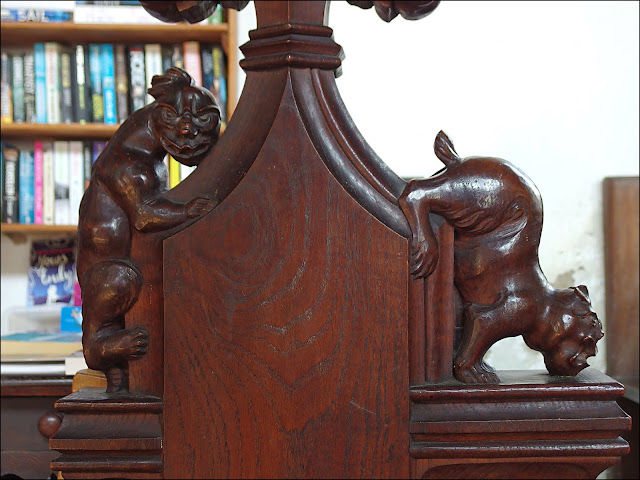 I don't know what those two are supposed to be but I think this is a hare.... 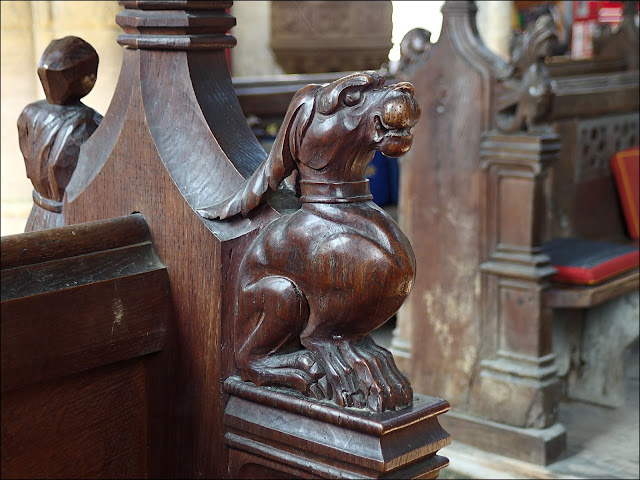 I took dozens of photos and I may show you some more of them when I'm short of stuff to fill these pages. But lets have a look outside. 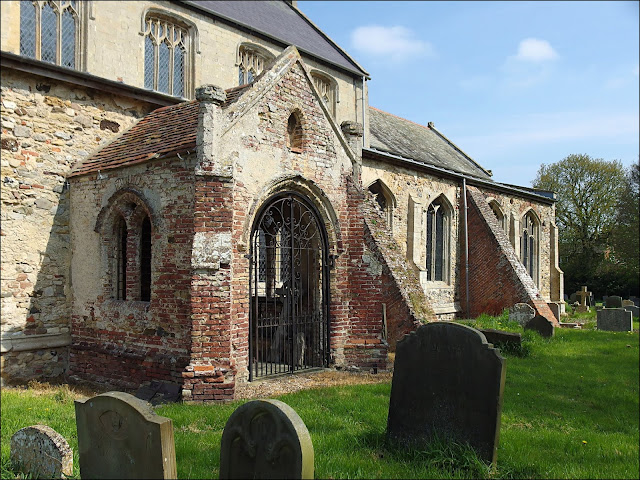 The south porch, which is the usual entrance to most churches, is a picturesque pile of time-worn red brick that wouldn't look at all out of place attached to the ruined church we saw back at Wiggenhall St Peter. And the south wall is also needing a bit of help from a couple of stout buttresses. 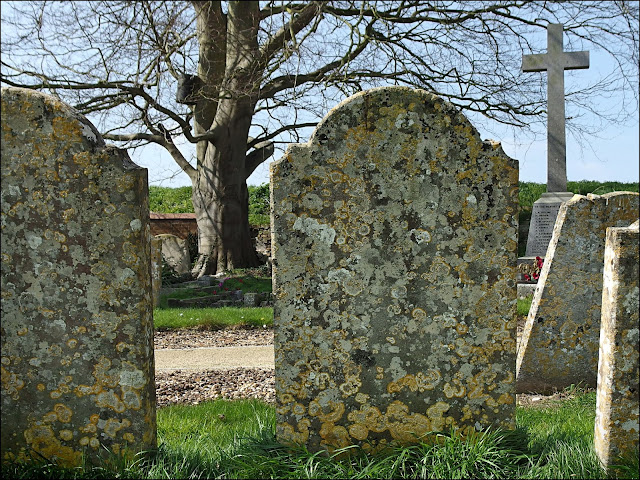 In the churchyard there are some splendidly lichenous old gravestones. 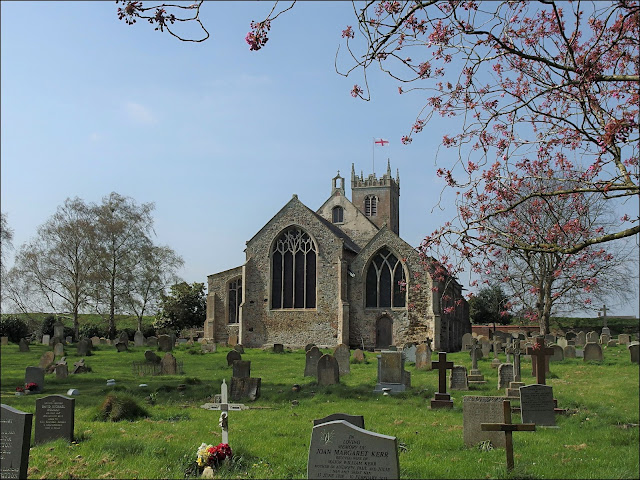 It's a lovely churchyard in a pretty but growing village. It was the birthplace of Ada Cambridge, and she was apparently the first  significant female Australian poet and novelist, though she's little appreciated in the land of her birth. Here's how she recalled the evenings of her Fenland childhood....

The western glories fade and pass. The twilight deepens more and more.
A thin mist, like a breath on glass, veils shining stream and distant shore;
And night is falling, still and cool, on each broad marsh and silent pool.

I've seen nights fall like that over this flat land...... But I can't linger any longer; I've still got a few more miles to traverse and two more churches to visit


Take care.
Posted by John "By Stargoose And Hanglands" at 17:44

Email ThisBlogThis!Share to TwitterShare to FacebookShare to Pinterest
Labels: Norfolk, Visits To Churches