A bright, sunny winter's day, but with a bitingly cold wind: a day for a walk with a bit of shelter from time to time. A day for a walk near Santon Downham, a tiny village alongside the River Little Ouse in the heart of Thetford Forest. 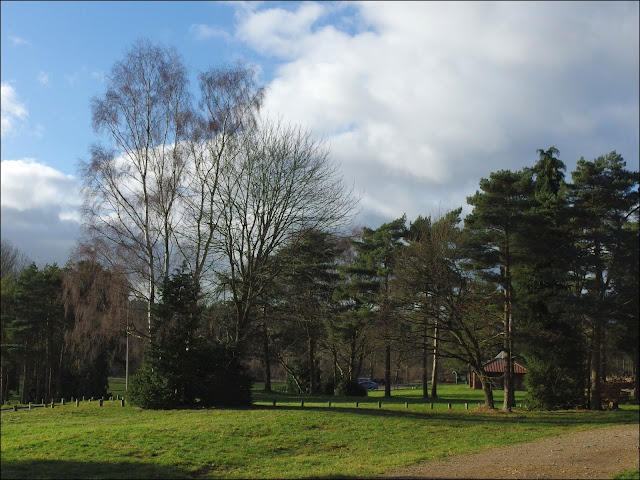 Santon Downham has perhaps the most beautiful car park in England - that's it above - and, though it's more crowded on summer weekends, in January it's very peaceful indeed. What's more there is an extensive network of walking routes leading along the valley and up into the forestry plantations. 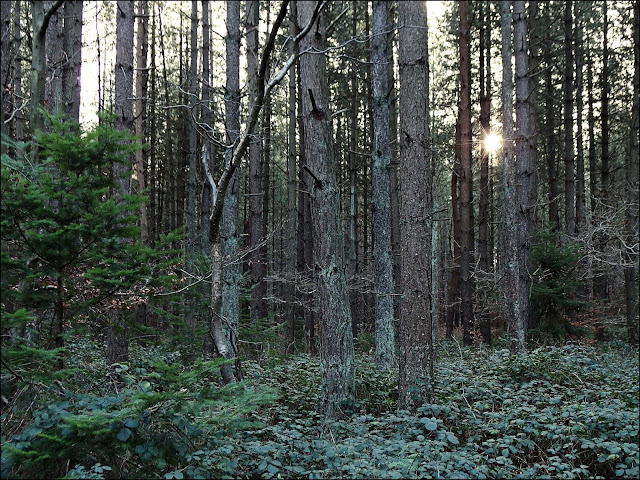 The forest is the largest coniferous plantation in lowland England and was established in the 1920s, after WWI had made it clear that the country needed to be self-sufficient in wood. Times change and nowadays recreation is as important as timber production. 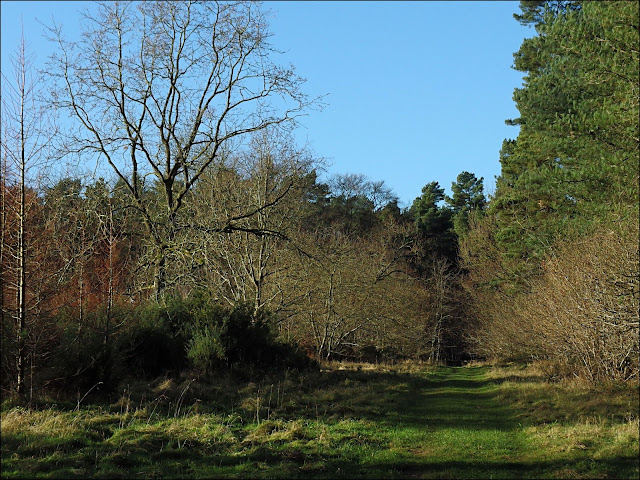 Although there are vast areas of unrelieved coniferous plantations there are also many clearings and deciduous woods, especially along the Little Ouse valley. 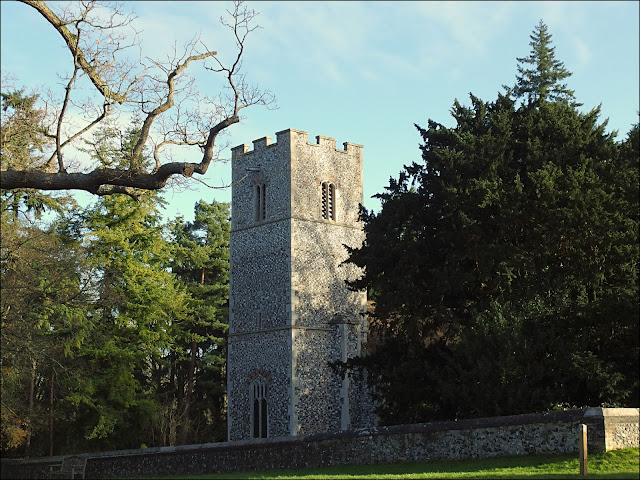 Looping around we arrive at Santon Downham village itself with its church surrounded, naturally enough, by tall trees. Time for a wander westwards along the river which forms the boundary between Suffolk and Norfolk - we're actually in Norfolk now. Near the village the path has had a lot of work carried out to improve the walking surface. The path leads all the way through to Brandon, though in winter it can be muddy or, worse still, flooded while in summer it can become rather overgrown. 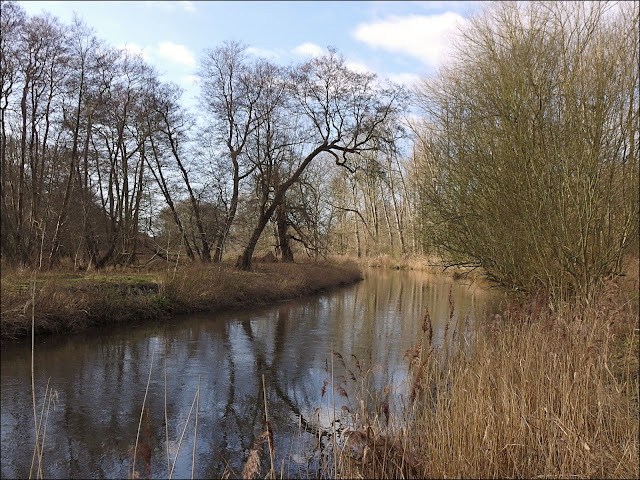 There wasn't much bird life around this morning though it usually turns up a few interesting species. 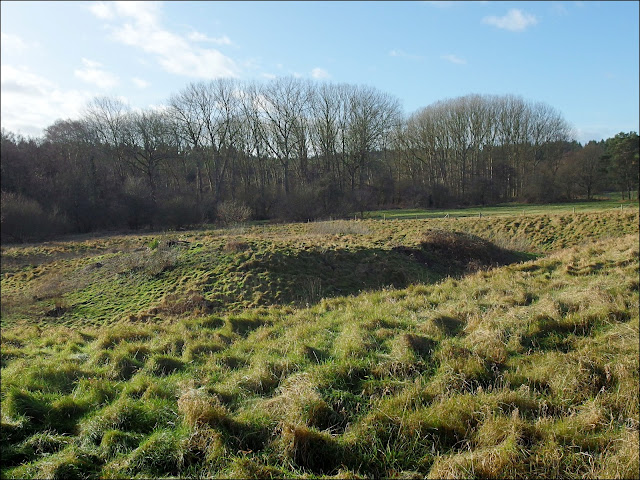 Back near the car park there's a little settlement known as Santon or St Helen's (the car park is also officially called St Helen's). There's not much here now and there probably never was, but the photo above shows an old moat which probably surrounded a farm house rather than a castle or any sort of fortification. 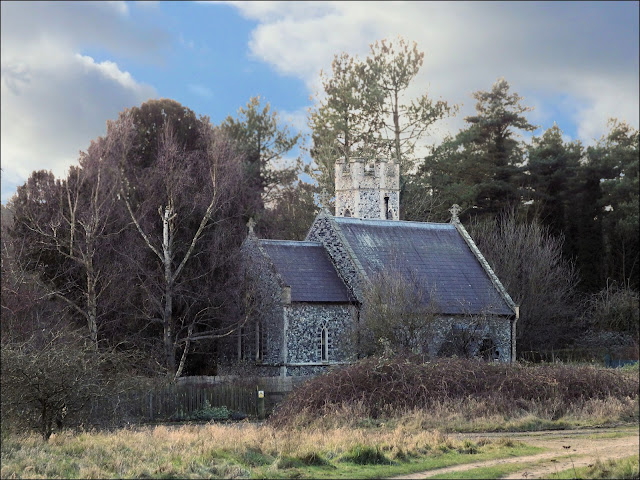 It does have its own tiny church however. 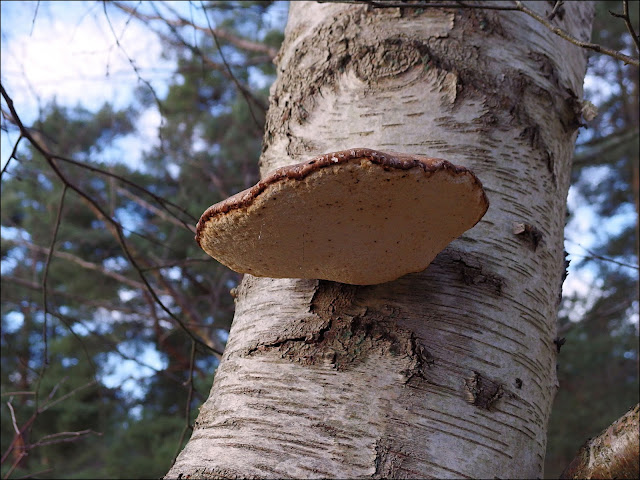 Birch trees are common around here as is the fungus Birch Polypore. The medicinal properties of the fungus have been known for centuries. In fact when the mummified body, known as Otzi the Iceman was discovered in the Austrian Alps in 1991, analysis showed that he was carrying small pieces of polypore in a pouch around his neck, he was also found to be suffering from the parasite Whipworm, which can be cured by acids contained in the fungus. Otzi is believed to have died about 3,300 years BC. 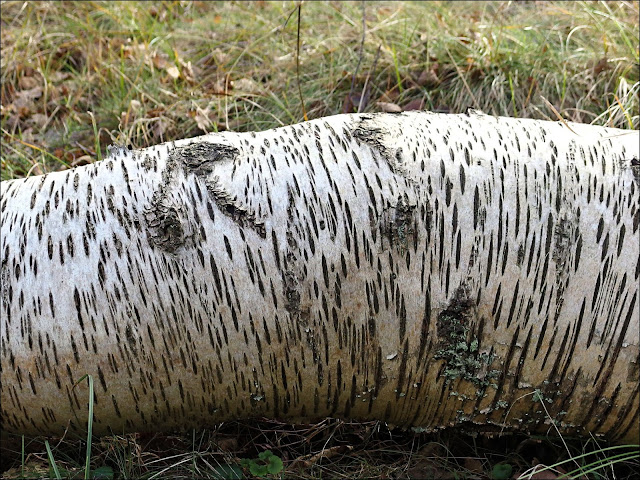 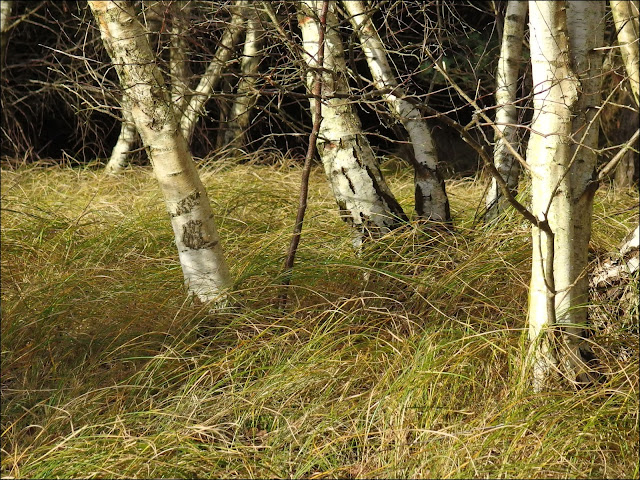 We are now heading towards an ancient site which I'll tell you about next time.

Posted by John "By Stargoose And Hanglands" at 10:50