Apologies to those of you who've heard some of this information about the origins of Whittlesey's Straw Bear Festival before - you can just enjoy the pictures! And there are a couple of new videos at the end.


Overheard on the street: "Of course, this isn't really that old; it all started up in the 1980s, before that - nothin'".
Overheard in one of the pubs: "It's amazing that these old traditions have survived unchanged for centuries!" 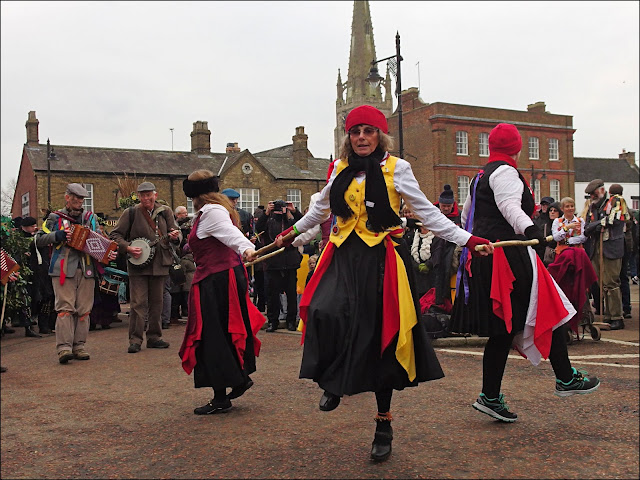 And in a way both have a point.
Back in Medieval times, before there was a Church of England, our churches contained icons of saints and also candles that would be kept burning throughout the year. One of these was known as "the plough-light" and was supposed to protect farm workers and ensure a good harvest. 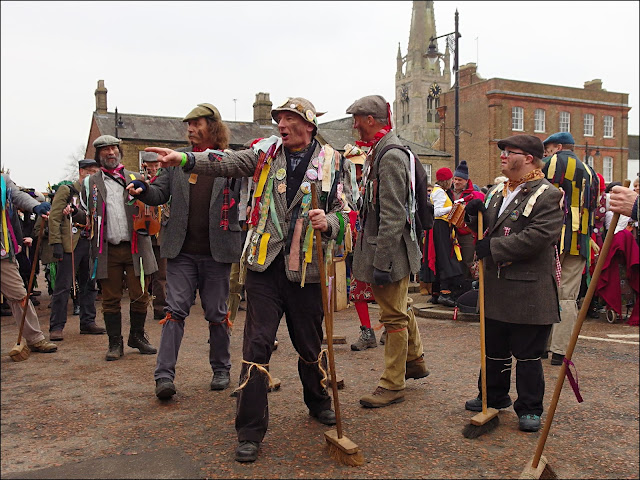 There was also a church service on the Sunday before the start of the agricultural year (then regarded as the first Monday after the Twelfth Day of Christmas) to bless the plough - an old plough was kept in at least one Cambridgeshire church within the last century. In order to pay for the candles to be kept alight the ploughboys toured the villages dancing, enacting rough little plays and collecting money on what became known as Plough Monday. 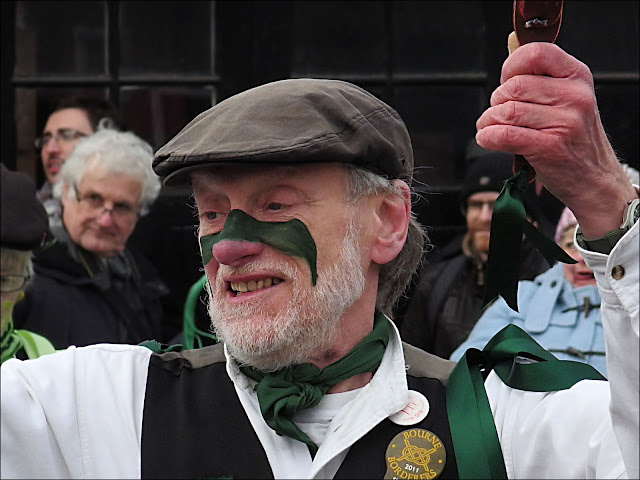 Details of exactly what went on are hard to come by, it varied across the country and probably evolved over time. With the coming of the Reformation the icons and candles were no more but farm workers still danced and collected money which went to the needy, but also paid for beer to wet the throats of the dancers. 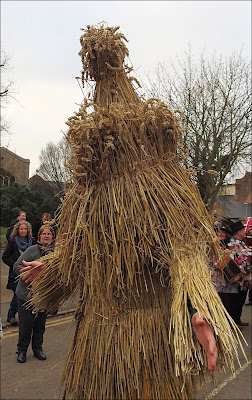 In Cambridgeshire one of the dancers dressed from head to foot in straw and was known as the "straw bear". He also danced for money despite his disguise weighing around 30 Kg or 70 lbs. Exactly where the idea of the "bear" came from is not known though similar costumes are also known from Europe, so maybe it originated there - there has long been close contact between East Anglia and mainland Europe. 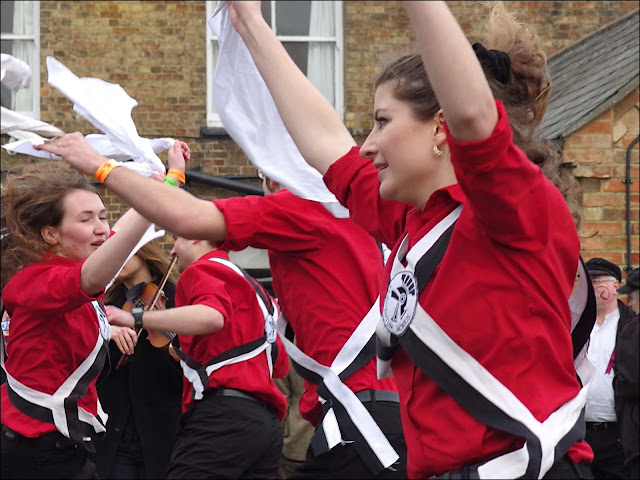 During the nineteenth century the custom declined and was almost lost, though a few folklorists collected a handful of dances and odd memories from the older people. The police tried to extinguish what was left by banning it as a form of begging, though in truth it was probably the associated drinking and fighting that they really objected to. 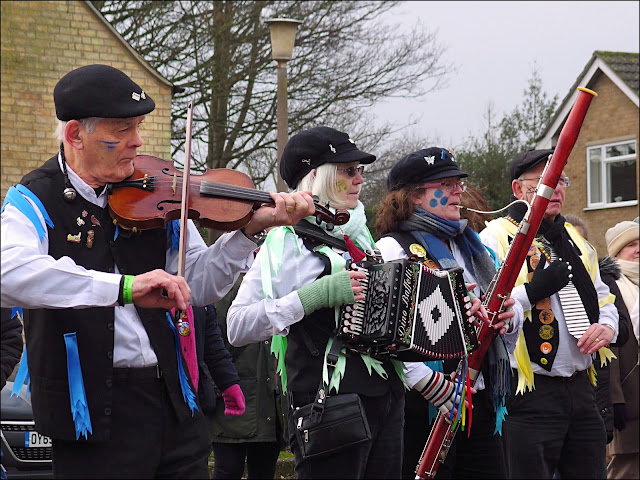 One of the last places where the tradition survived was Whittlesey. In the 1980s, after years of neglect, a few people sought to revive the practice in a small way. 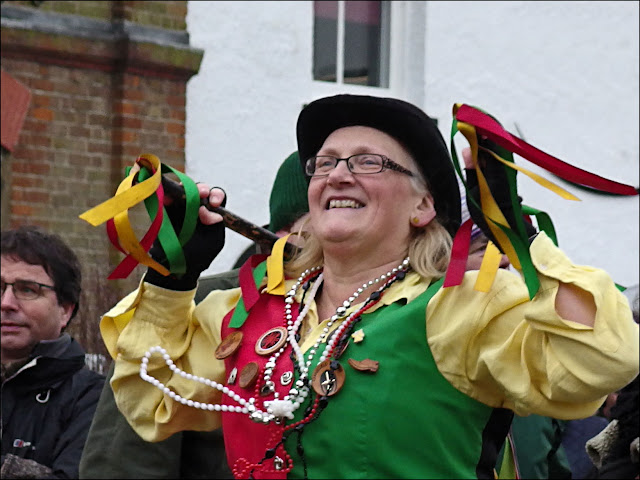 Over the years it has grown beyond all recognition with many kinds of traditional dance being included - Cotswold Morris dancing, Border Morris, North-western Morris and clog dancing, Longsword and Rapper dancing, and even Appalachian dancing from the USA being added to the Molly dancing which was practised in East Anglia. 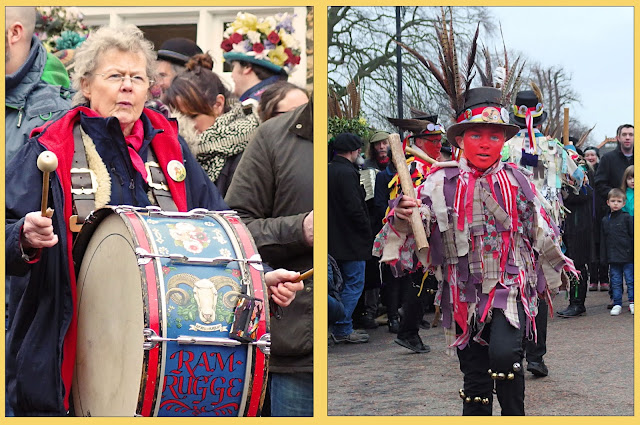 The dance styles have evolved too with new dances being invented and many more female dancers. As those of you who saw the video on the last post will have seen, many local primary schools have also become involved. There's also a folk music concert, a barn dance, poets, music and storytelling. 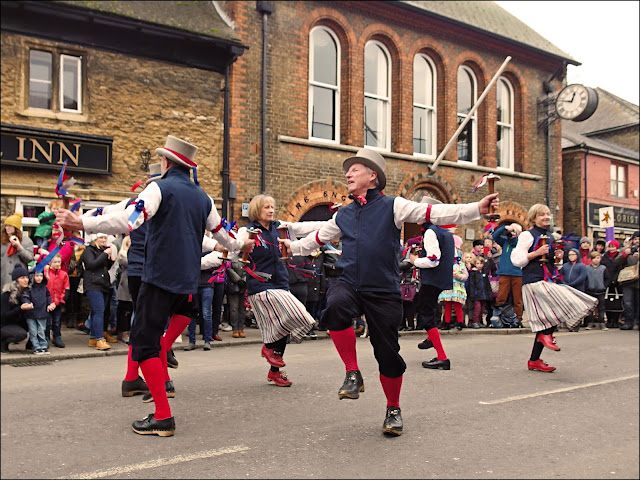 Here's a couple of videos for you:
From the sublime - Appalachian dance from the cleverly named Tap & Sync....

That's quite enough exercise for now! 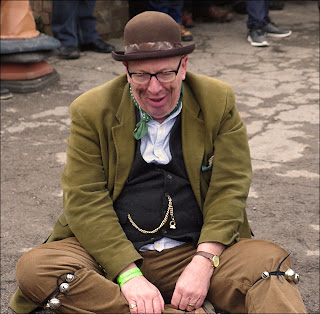 Posted by John "By Stargoose And Hanglands" at 18:28