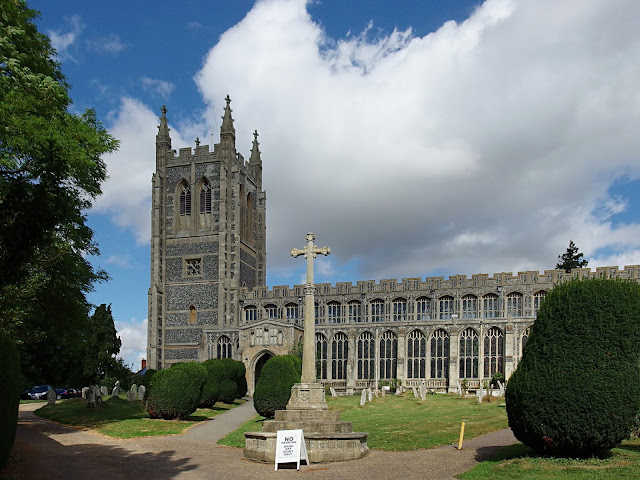 Long Melford is a long village, two-and-a-half miles from one end of its main street to the other, and it has a long church as well, it's believed to have the longest nave of any parish in England. And of course it's got a long and interesting history too. 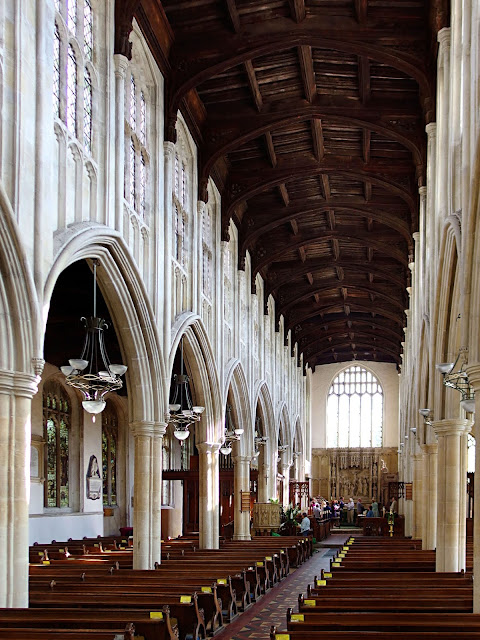 There's been a church on the site since Saxon times but the main body of the church dates from the late fifteenth century. It's immediately obvious that it's much too big for a village church, but at that time this sleepy corner of Suffolk was the economic, agricultural and industrial powerhouse of the nation. And the reason was wool. This building and others like it were financed by wealthy merchants and farmers with one eye on the hereafter and the other on enhancing their power and reputation in this life. 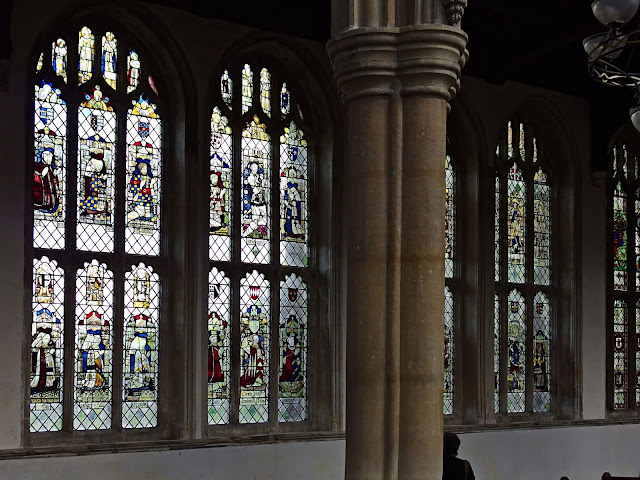 These "wool churches", as they are known, attract a constant stream of visitors during the summer months and this particular one even has a gift shop tucked in the corner - something you frequently encounter in our great cathedrals but seldom in a village church. The upkeep of these ancient buildings demands that all sources of revenue are utilised. 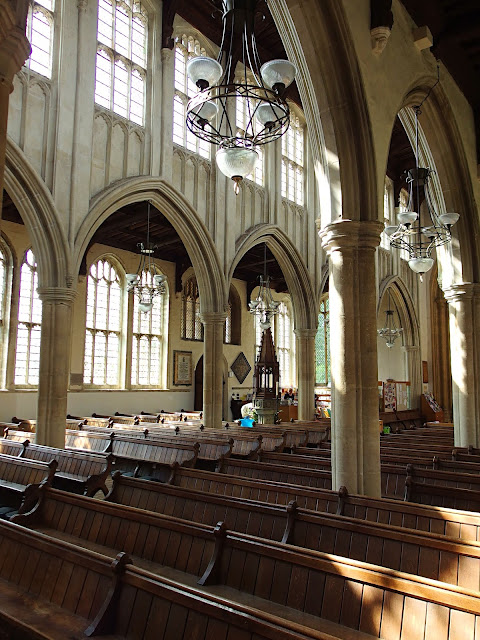 Remarkably much of the stained glass at Long Melford is medieval and really worthy of much greater examination than I had time for. Another time, perhaps. 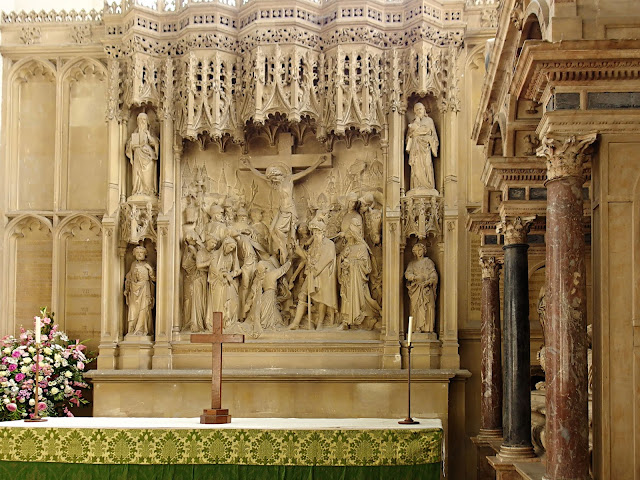 The reredos is a detailed and intricate piece of sculpture and on the right of the picture above you can glimpse one of the many memorials to the great of the parish. 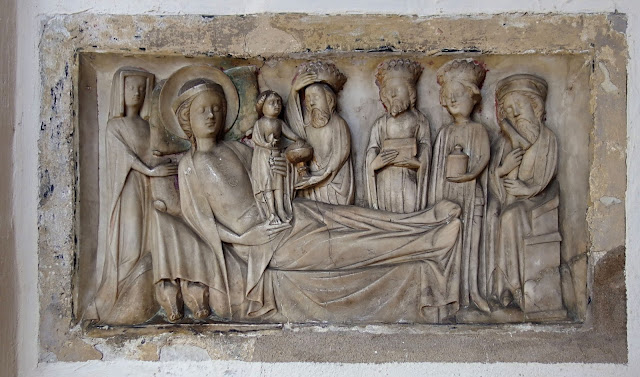 Much more modest is this tiny but charming scene showing the Adoration of the Magi. It dates from as long ago as 1350 and is a rare survival from those times. It was discovered buried under the floor during the eighteenth century, having perhaps been hidden there at the time of the Reformation. It's worth clicking on the image to enlarge it: on the left you can see the midwife plumping up the pillows behind Mary's head and there are two calves peering out from under the bed, meanwhile on the right of the picture is, I suppose, Joseph, exhausted by the business of childbirth, and sleeping with his head on his staff. 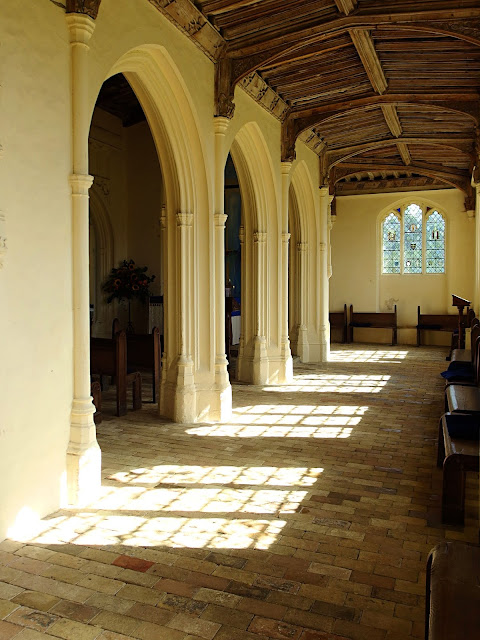 At the east end of the church there is a small Lady Chapel which is quite separate from the rest of the church. 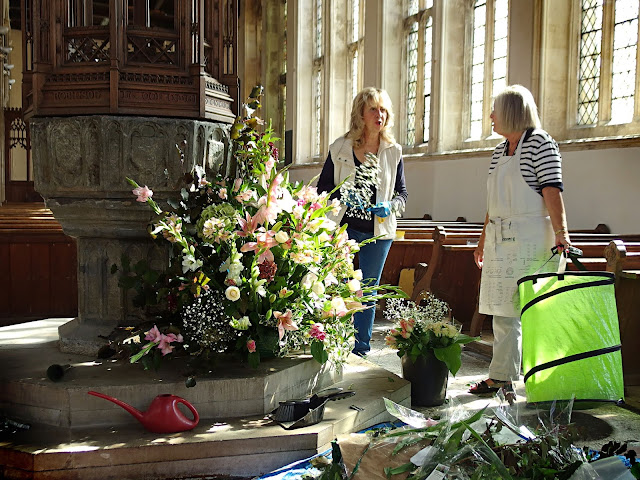 These ladies, on the other hand, are central to this and every other church in the land, as they are the ones responsible for the cleaning, brass polishing, flower arranging and all those other jobs which go largely unnoticed (unless nobody does them!). 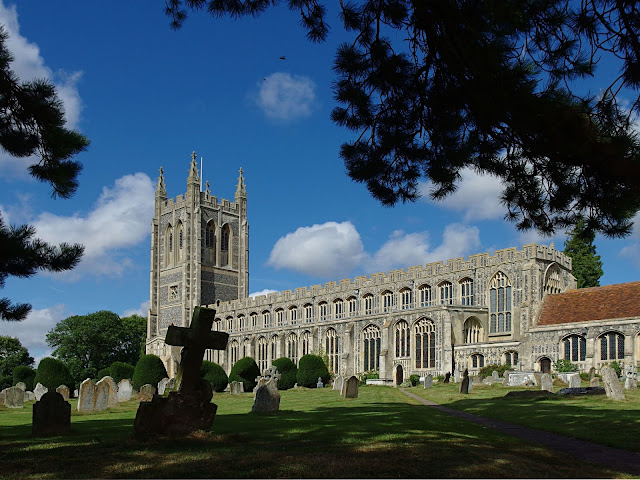 The tower, which looks just right for the rest of the church, it may surprise you to learn (it surprised me anyway) is of a completely different date to everything else. It's a Victorian structure built around a seventeenth century brick tower and is the work of George Bodley whose work we've seen elsewhere, usually church and college renovations in the Arts and Crafts style. When he put his mind to it he could also do Victorian Gothic too, which blends in almost seamlessly with the Gothic Perpendicular of the nave and chancel.

And so, all too soon, farewell to one of the finest churches in the East of England.

Posted by John "By Stargoose And Hanglands" at 10:10

Email ThisBlogThis!Share to TwitterShare to FacebookShare to Pinterest
Labels: Suffolk, Visits To Churches