...that are well-worth seeing before leaving the Horsey area, where we'd been visiting the Grey Seals
All Saints' Church at Horsey 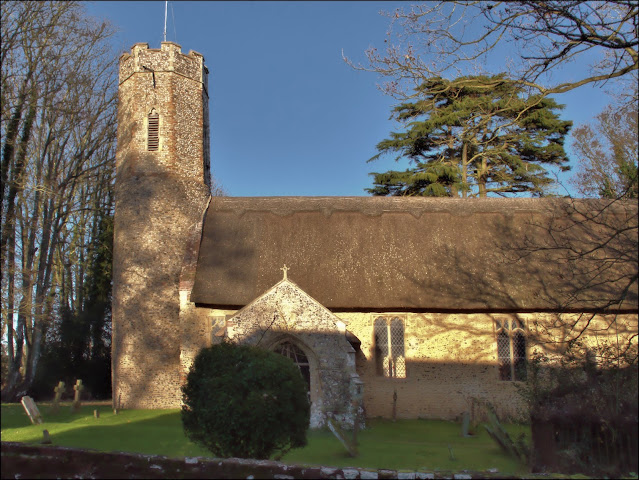 The tiny settlement of Horsey stands just outside the Norfolk Broads national park and feels quite different from that nearby watery world. The strong, low-angled sun and the tree-shadows made photographing the building very tricky, but I thought you'd like to see it anyway. It's a very traditional Norfolk church with its round tower and thatched roof and seems to date from around the eleventh or twelfth centuries. 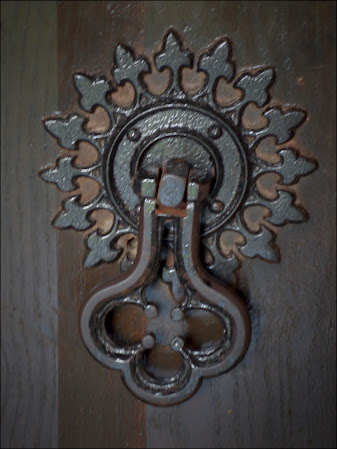 If this ornate door is unlocked we can take a peep inside. 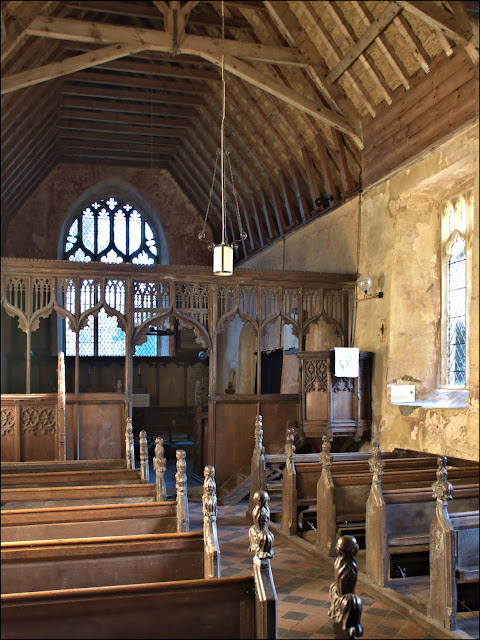 Everything is as old-fashioned and rustic as one would hope, almost as if it has grown up from the rich Norfolk soil; a refuge from the modern world. 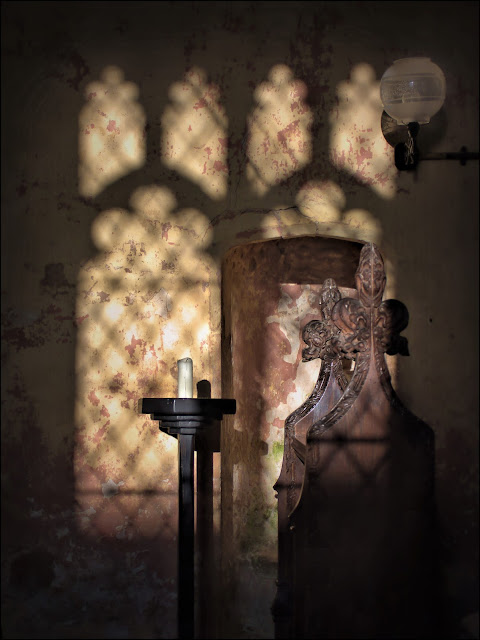 Sometimes old churches like this feel damp and gloomy, but with the bright sun coming in through the many clear-glass windows the interior had a warm and welcoming glow. 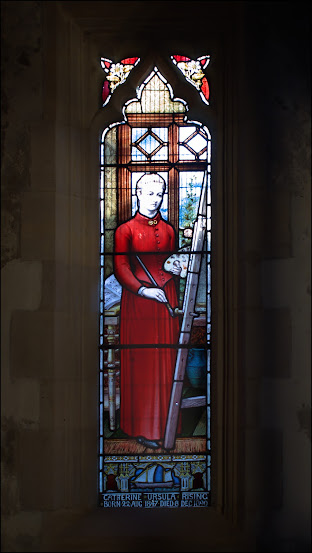 There are just a few stained glass windows which were added during the Victorian era, including this charming memorial to Catherine Ursula Rising, a local artist, pictured at her easel.
Horsey Wind Pump 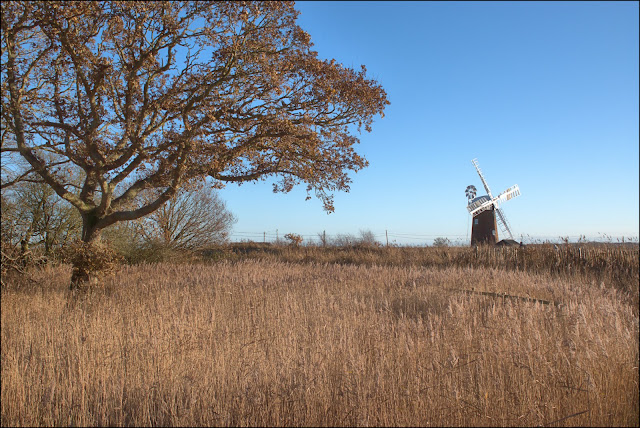 The whole of the Norfolk Broads is studded with what appear to be windmills of varying ages and states of preservation: except that they are not mills at all but wind-driven pumps concerned with the drainage of this difficult land. 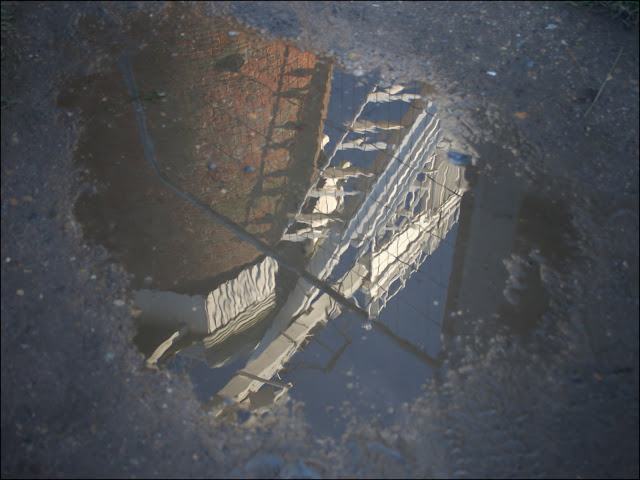 As we got nearer I spotted an interesting reflection in a puddle.
The wind-pump is not as ancient as you might imagine, dating from 1912. But it replaced a much older pump, the bottom few courses of brick are still in place. The flat, windswept land here and gales coming off the sea, meant that these structures were constantly being repaired or replaced. In fact the National Trust, who look after the structure, are still carrying out frequent renovation work, even though the pump is no longer in use, having been replaced by diesel power. 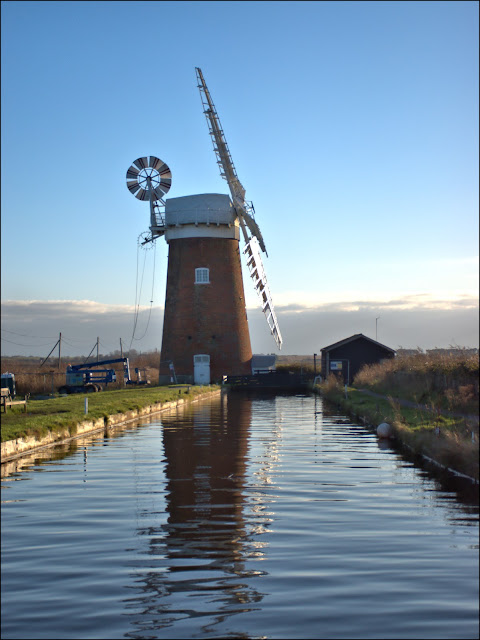 In less contagious times you can climb up to the top to enjoy the view and there's also a small café alongside for visitors.
St Mary's Church, East Somerton 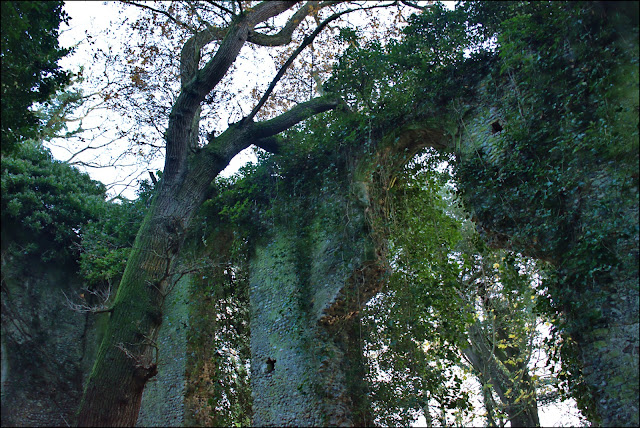 Just two or three miles down the road from Horsey, hidden away among trees, is the magnificent romantic ruin of St Mary's church. 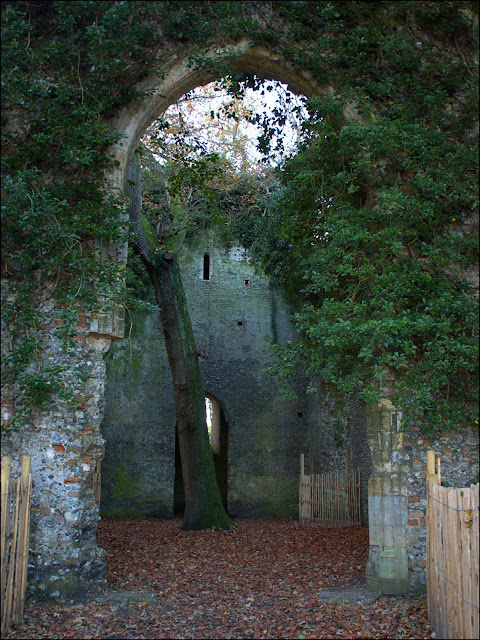 It must once have been a very large church but has been ruinous since the seventeenth century, by which time the parish had been subsumed into the larger parish of Winterton. This huge building then became a private chapel to the inhabitants of nearby Burnley Hall, who presumably could not afford the upkeep of such an enormous building. 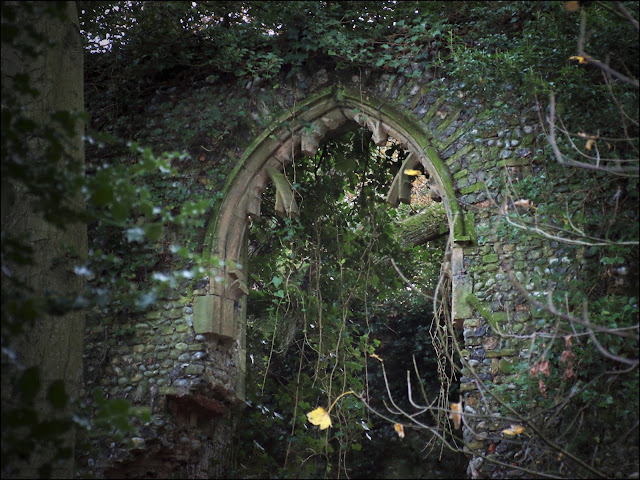 Having feasted our eyes on the ivy-clad ruin we climbed into my brother's car to travel the ninety miles or so back home.
Take care.
Posted by John "By Stargoose And Hanglands" at 07:27