The North Sea coast in mid-winter can be a brutal place. Winds whip down from the Baltic, waves crash onto the beaches and there's no cover whatever from the elements. Not the sort of place, nor the time of year, to give birth and care for the little ones. Or so you might think. 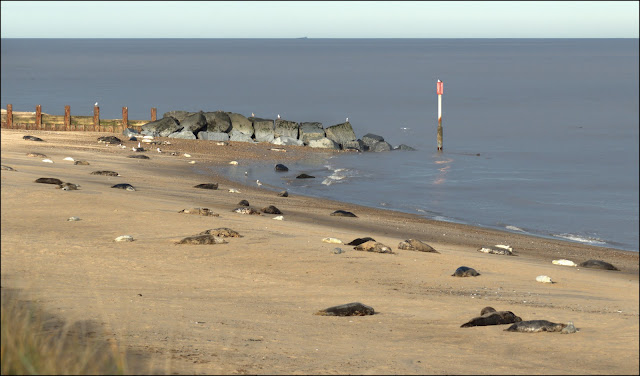 This is the coast at Horsey Gap in north Norfolk - and those aren't rocks on the beach, but Grey Seals; the darker ones are probably males (bulls), the mottled brown ones are the cows and the smaller white ones are their pups. 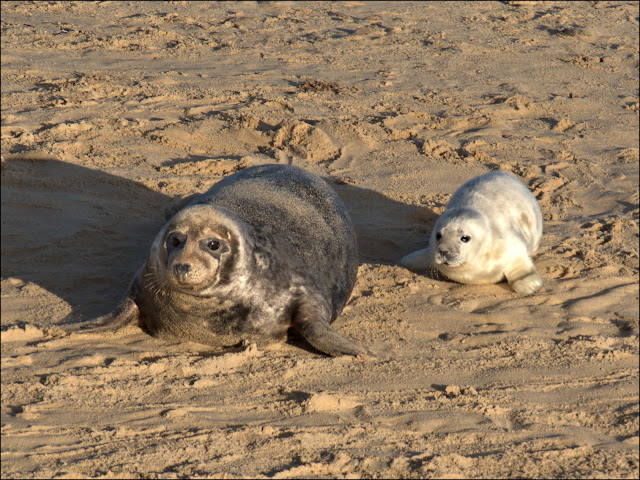 They come ashore along this stretch of coast and start giving birth in November, though some will not be born until January. 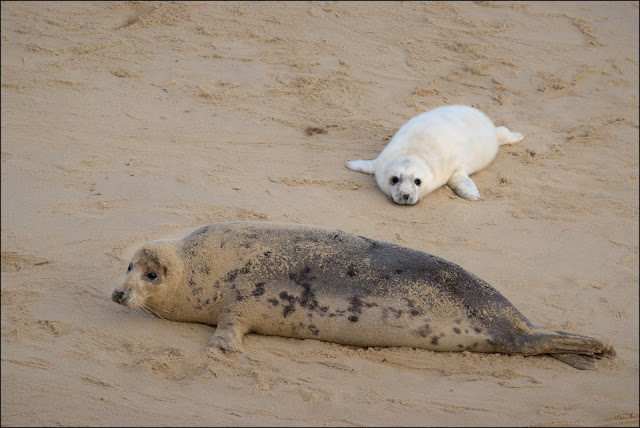 They only suckle the pups for around three weeks, though the milk is so rich that in that time they more than triple their weight. They don't stay cute and fluffy like that for long either, they soon moult all that cotton wool and grow a waterproof, sea-going coat like their parents. 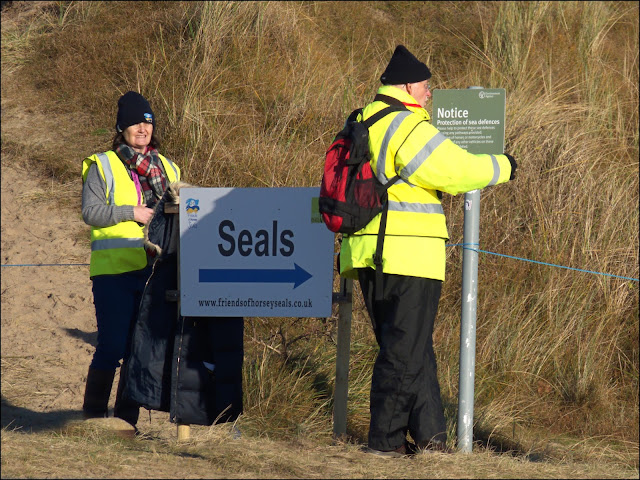 Should you visit Horsey you'll be greeted by members of the Friends of Horsey Seals (FoHS) who oversee the welfare of both seals and visitors. 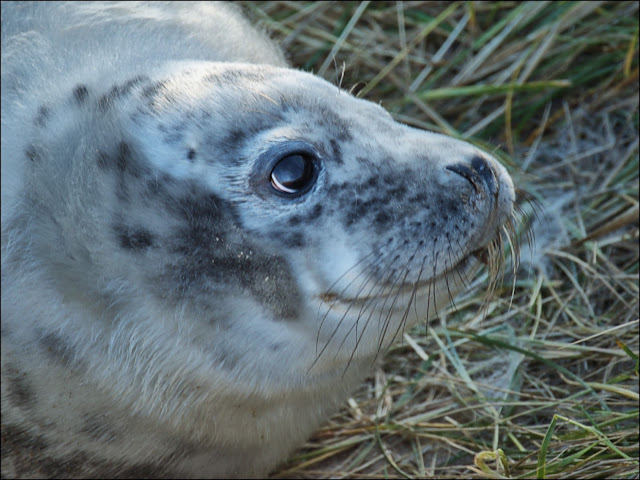 This gorgeous creature, for example, had managed to get up close to the path through the dunes and was being supervised by one of the volunteer wardens so that we didn't approach too closely, thereby avoiding scaring the pup or any human visitors getting bitten. This photo was taken with a long lens from an appropriate distance. 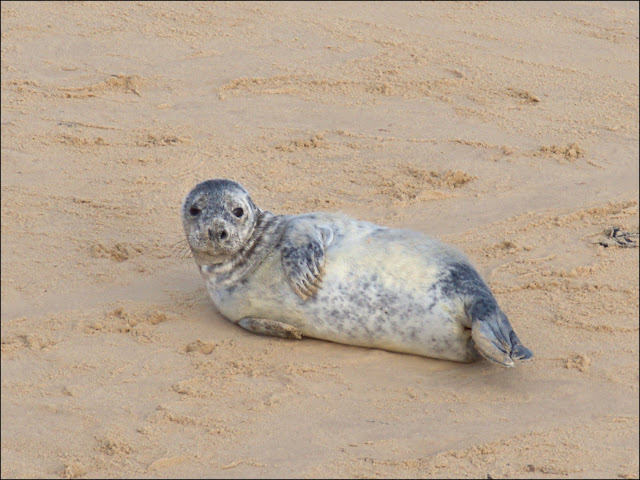 The beach itself is roped off during the breeding season to prevent disturbance to the seals. In fact part of the dune path was closed too as a particularly cranky bull had decided to take up residence in the dunes. It didn't matter too much as there was plenty to see in the other direction, where there were less people. 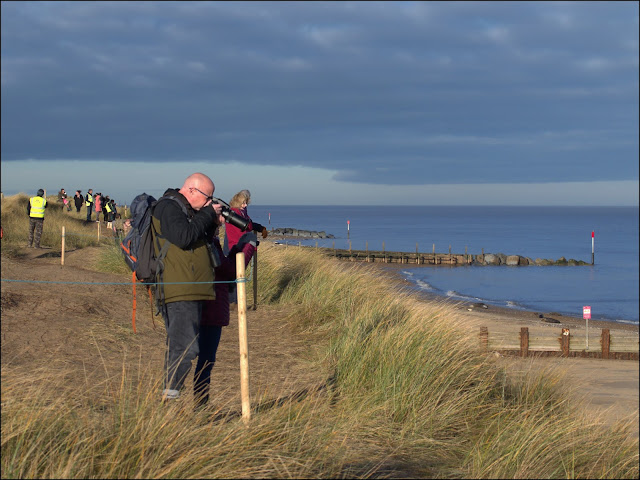 Everyone we saw was behaving impeccably, though we were told that the public can at times do all manner of crazy and dangerous things, like dodging under the ropes and trying to chase the pups into the sea. As their coats are not waterproof when they are young this could be fatal for them. 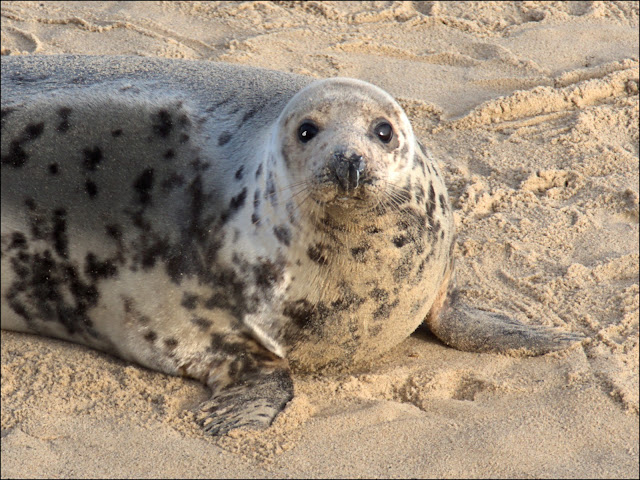 When this colony first began, at the beginning of this century, there were just a few seals here, but it seems there are more each year. So just how many seals give birth along this stretch of coast? 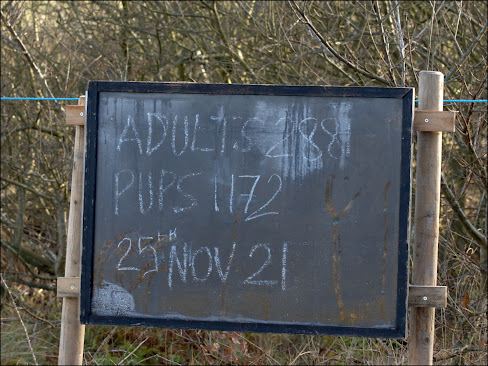 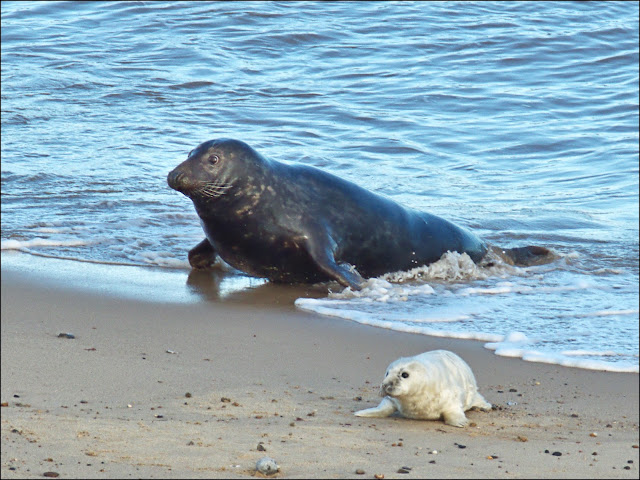 Those of you from the UK may remember that we had some strong winds and storms at the beginning of December. This played havoc with the seals and many of them sought refuge among the dunes making it too dangerous for those trying to count them. Seals can be aggressive and surprisingly mobile if you get between them and the sea, as they feel threatened when their escape route is blocked. 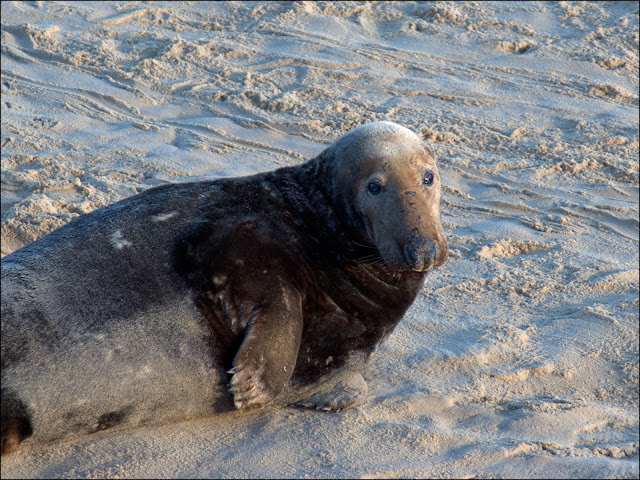 However I can give you the total from last winter when 2,500 pups were born along this stretch of coast between Horsey and Winterton. In all about 40% of the world's population of Grey Seals are born around the British coast. 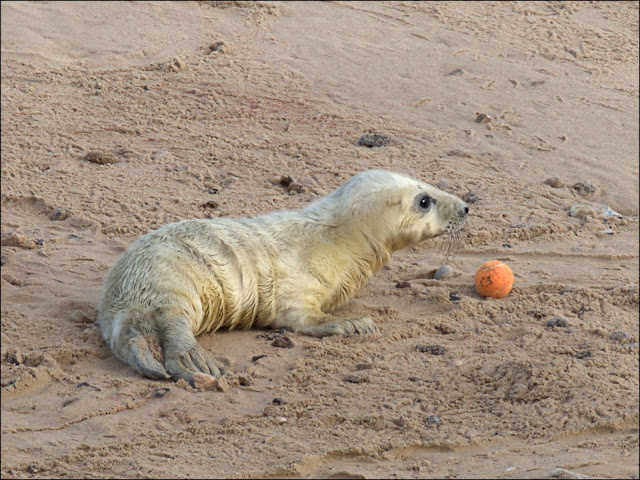 This little one, who must be very recently born, had found a tennis ball washed up by the tide and was practising some football skills. They are naturally very inquisitive and tend to play with everything they find, some of which are much more harmful. Every year the team here rescue young pups who get tangled up in plastic and fishing nets. 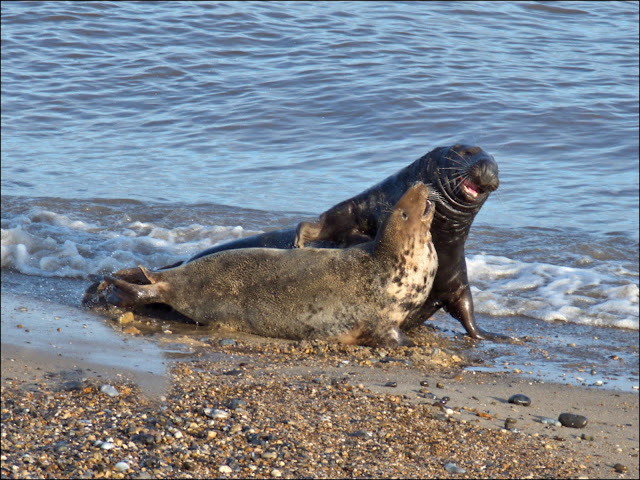 The gestation period for seals is eleven months, which means that, as soon as the pups are weaned at three weeks, breeding starts again. 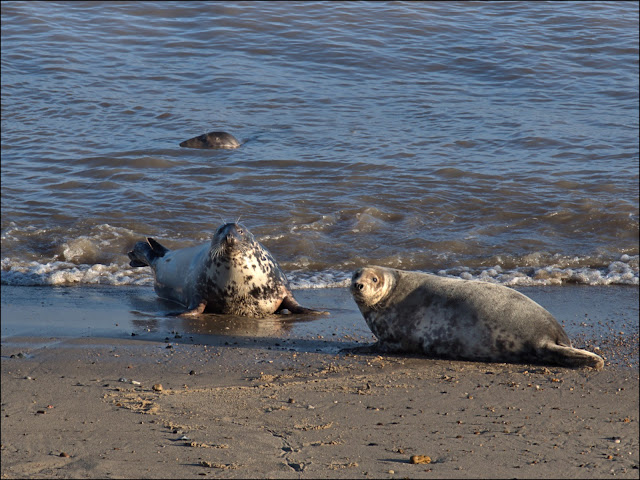 A few more facts about these remarkable creatures:
Although they are warm-blooded, air-breathing mammals (just like us) they can dive down to 300 metres and stay underwater for around twenty minutes. 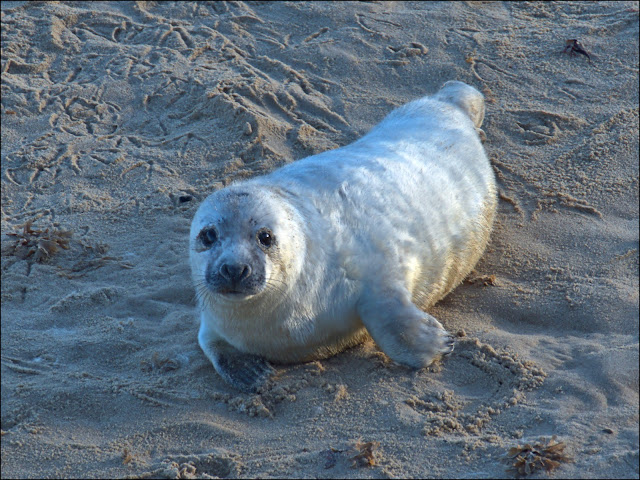 Every year or two our local news programmes feature stories about seals that have turned up in all sorts of unlikely places - like in a farmer's field twenty miles inland! 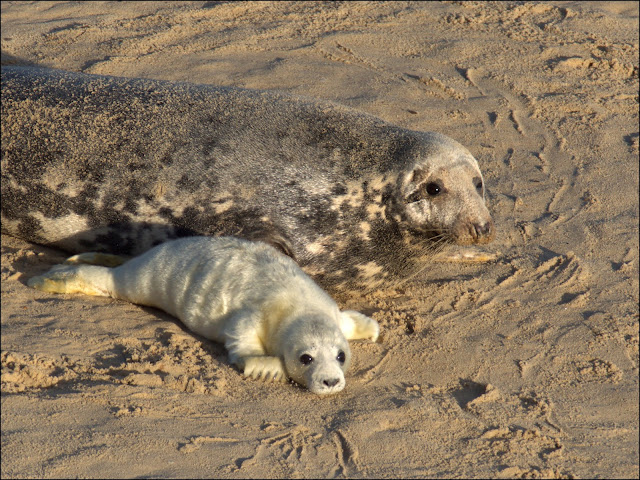 Some people think that the Grey Seal is not as good-looking as the Common or Harbour Seal. The scientific community agrees and its Latin name Halichoerus gryphus roughly translates as "hook-nosed sea-pig". 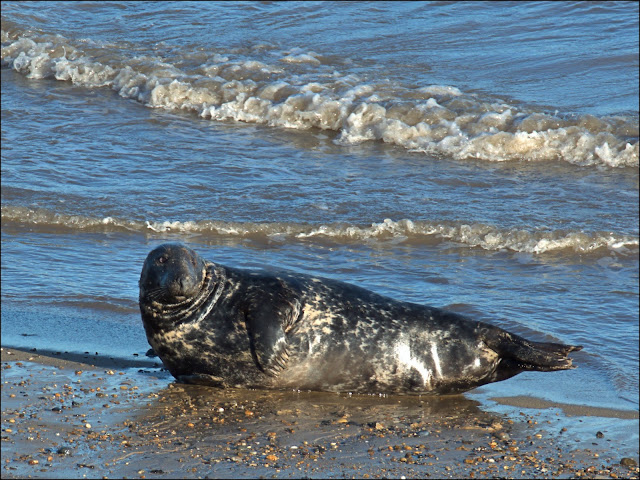 Bulls like the one above can live for about 25 years and weigh in at around 350 Kg (772 lbs) - that's around a third of a ton. Cows are not so big but can live about ten years longer. 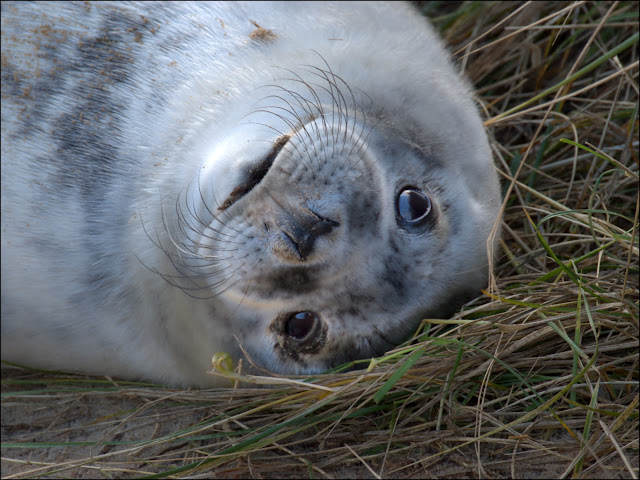 This little one's got a lot of growing to do.

Take care.
Posted by John "By Stargoose And Hanglands" at 16:22