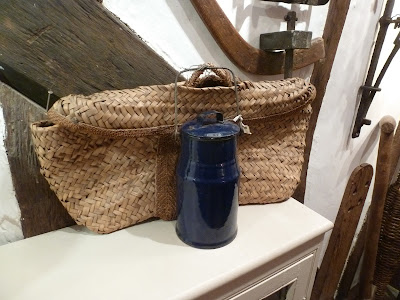 In an earlier post I mentioned that when farmworkers stopped for their lunch break around these parts they called it their "dockey", the word being applied to both the break and the food and drink they took with them to the fields. In the Cambridge Folk Museum I found displayed this dockey bag and can. The bag appears to be hand-made rush-work - so much more elegant than the plastic bag in which I used to take my dockey to work on the farm. The word is said to derive from the fact that farmers used to "dock" their pay for this unproductive time.


The Hole In The Wall 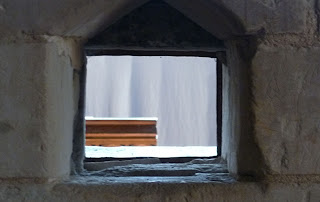 A tiny little opening in the screen in Harlton church. This screen is unusual in being a stone wall rather than the usual wooden screen. In medieval times the screen was just that - a solid partition between the chancel and the nave of the church - and the hole, or squint, was provided so that there could be communication and synchronisation of the service in the two quite separate parts of the church. Over the years the screens have been opened up and now have a more symbolic existence. But in this church the squint remains, presumably because of its more permanent stone construction. 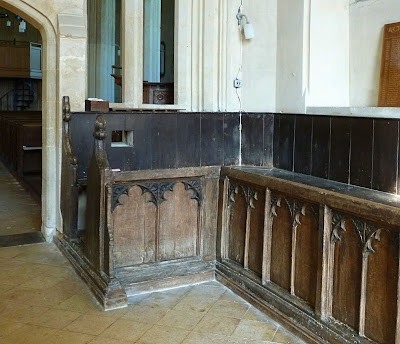 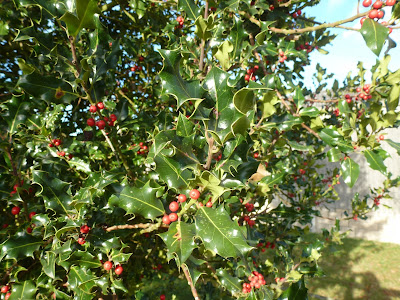 As it's getting near Christmas perhaps we ought to look at something seasonal. Yes, the prickly stuff with the red berries. Except they're technically not berries but drupes. And only female holly bushes have them anyway. The leaves aren't all prickly either - the prickles are only there to dissuade animals from browsing and once a bush reaches a good height it stops producing prickly leaves on the upper branches. This is the top of same bush photographed above... 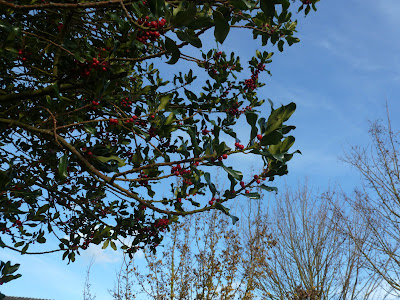 Like many trees and bushes holly has an adaptation which makes it almost indestructible; if you cut it down it simply grows again. The reason trees have developed this trick (if you believe the conservationist and writer, George Monbiot, anyway) is elephants! Elephants and other large animals cause enormous damage to woodland, and trees adapted in order to survive. Although the large animals have disappeared from our woodland long ago the trees have not lost the ability to regrow. 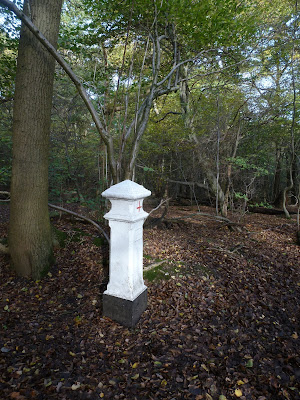 Deep in the Hertfordshire woodland stands this rather smart post. It owes its existence to the Great Fire Of London. In order to finance the re-building, the City Of London imposed taxes on coal which was brought in. The area over which they claimed these payments stretched about twenty miles from the City and by the 1860s it was decided to mark the area with a series of posts. No by-way was too small to have a post as our photo shows.

Well, I hope that was an interesting post.
Take care.

Posted by John "By Stargoose And Hanglands" at 23:00