Foggy On The Gogs

As you've probably noticed this blog has been inactive for the last four months. I've had some health issues which have kept me from venturing out and I've needed a bit of time for myself. Thanks to all those of you who sent best wishes and I apologise for being so negligent about replying to comments. 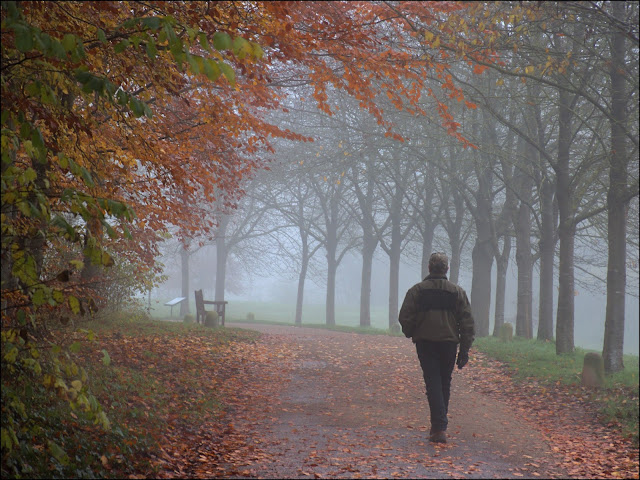 My brother and I recently went to Wandlebury Country Park in the gentle Gogmagog hills, somewhere we've often walked before. It was a foggy morning and there were very few cars in the car park. Having spent an entertaining few minutes reading instructions and pressing green and yellow buttons on the ticket machine, we finally paid-and-displayed and made our way along the main path. 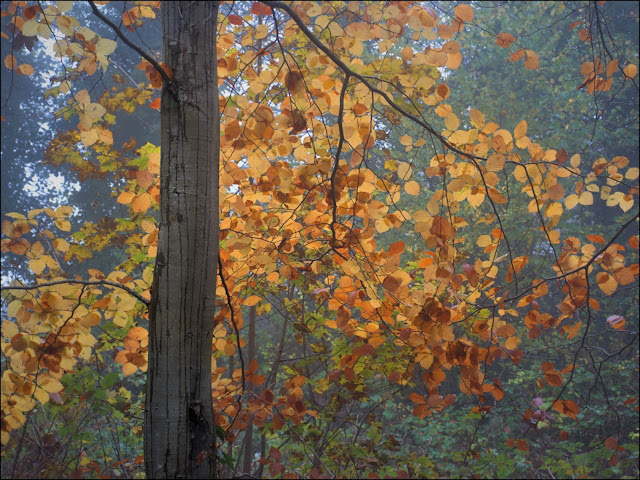 Autumn leaves on a quiet, misty morning - even if it is December! 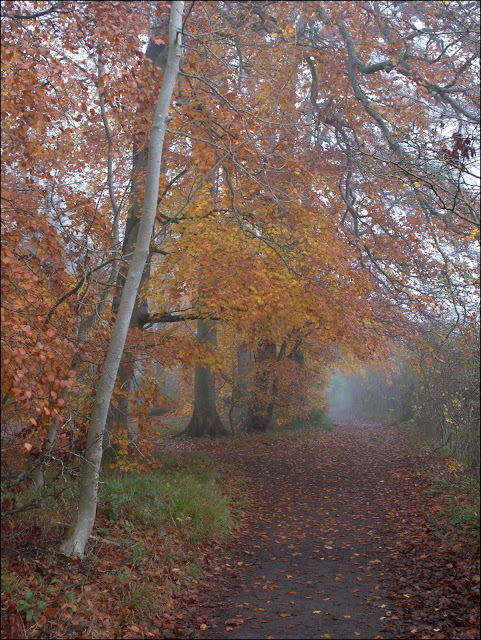 We had the paths to ourselves for most of the morning; obviously the general public does not share my taste for being outside on foggy, winter days. 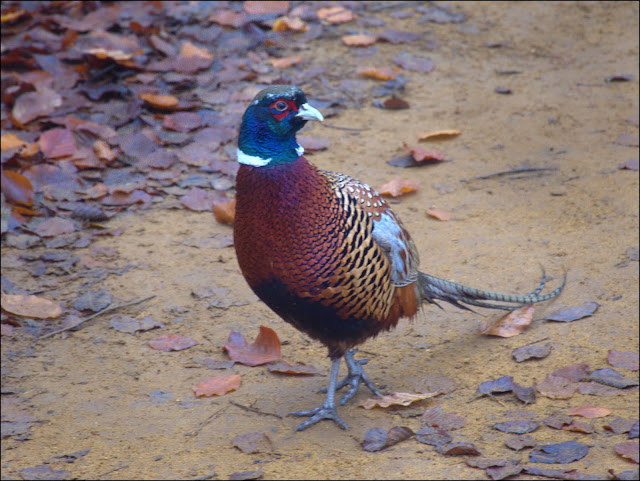 This cock Pheasant hasn't quite got his full breeding plumage just yet, though he still looks a lot more dapper than me! 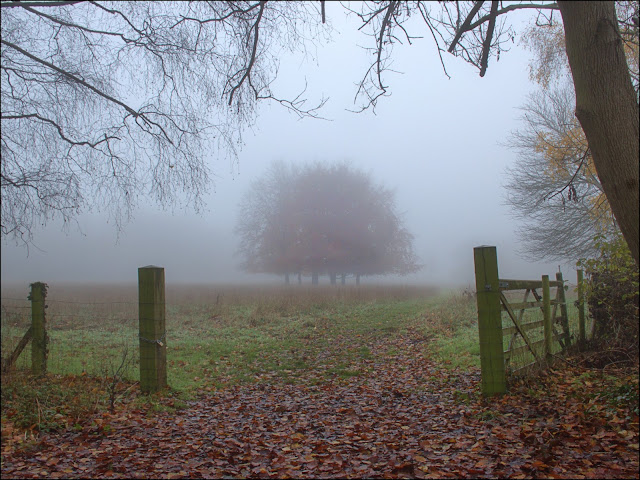 This clump of trees always catches my eye and generally makes a nice photo, even when it's barely visible through the mist. The problem I sometimes have with Autumn is that I end up with lots of pictures of trees with golden leaves that are all basically the same - it takes a little effort to seek out other things of interest and make a varied set of photos. 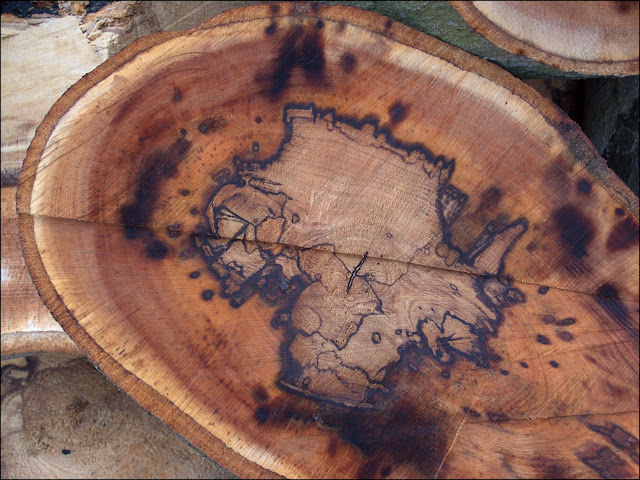 Things like the pile of logs which included what looks to me like the map of an undiscovered island. I have no idea what caused this strange pattern, though it was quite possibly the disease that weakened the tree and led to its toppling over. 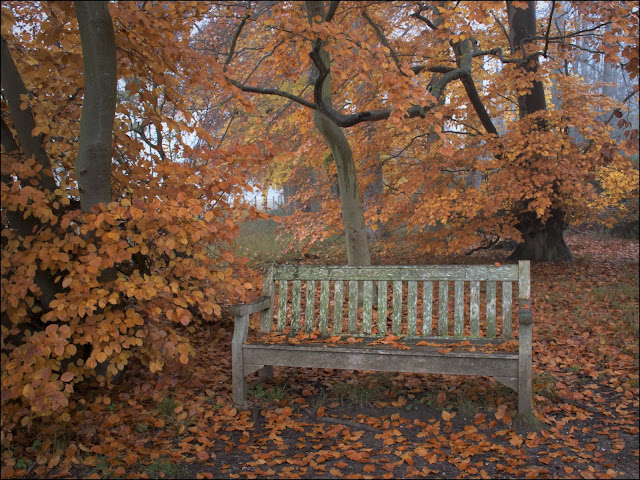 OK, we can get back to the golden leaves now! This favourite summertime seat was a bit damp to perch on in December. 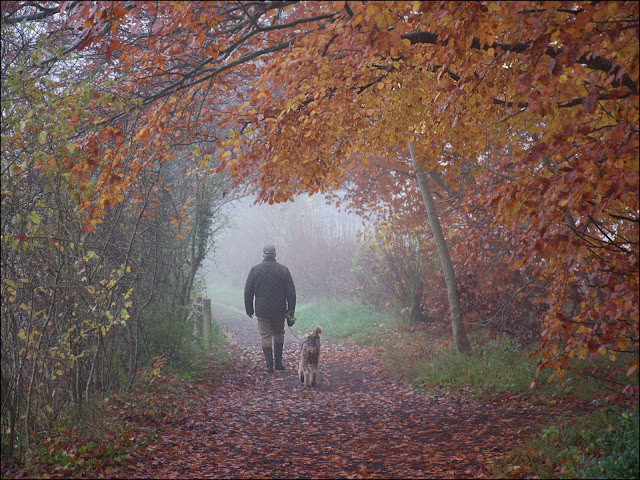 A few dog-walkers were using the paths, though many of them prefer the paths just outside the park, where they can let their dogs off the lead - not that you ever see anyone around to enforce the rules. 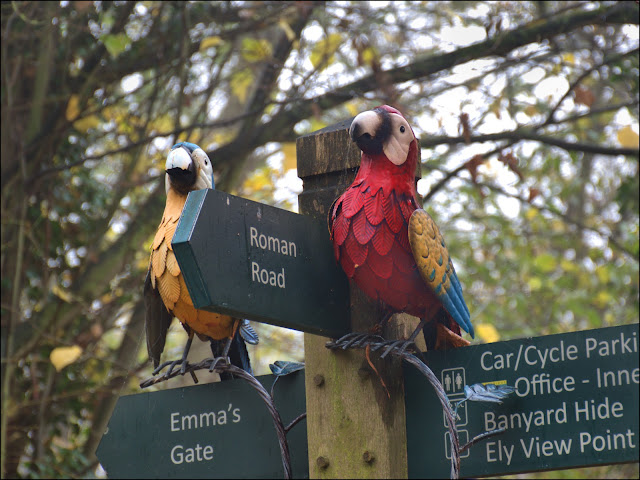 We were not having much luck spotting the birdlife, so these exotic specimens were a surprise to see. They seemed to recommend the avenue leading towards the old Roman Road. 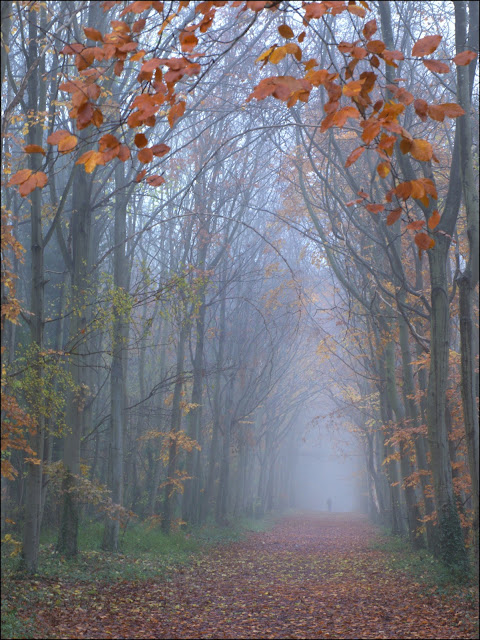 We took their advice and were rewarded with the scene above. We were probably a few days too late to see the full glory of the beech trees, most of the leaves having fallen in this slightly more exposed spot. 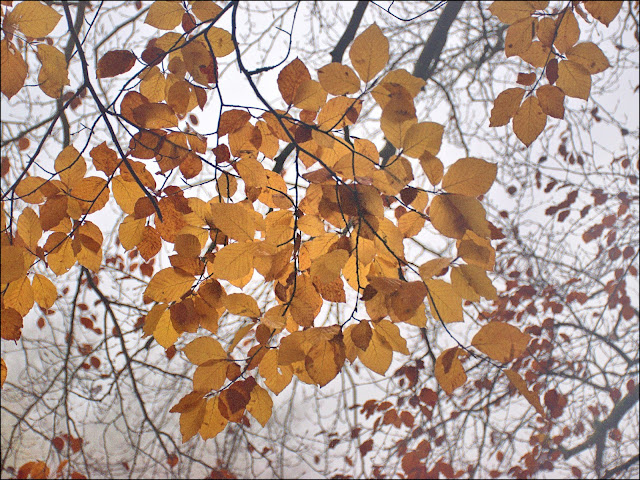 I rather like the effect of seeing leaves and branches picked out against a white sky, though most photographers avoid blank skies at all costs; perhaps they've never seen the huge areas of white left in many ancient Chinese paintings. 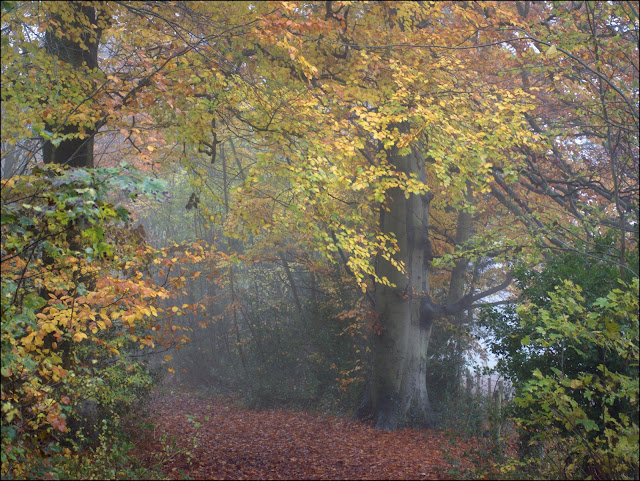 In some sheltered places the trees retained their golden-yellow attire. 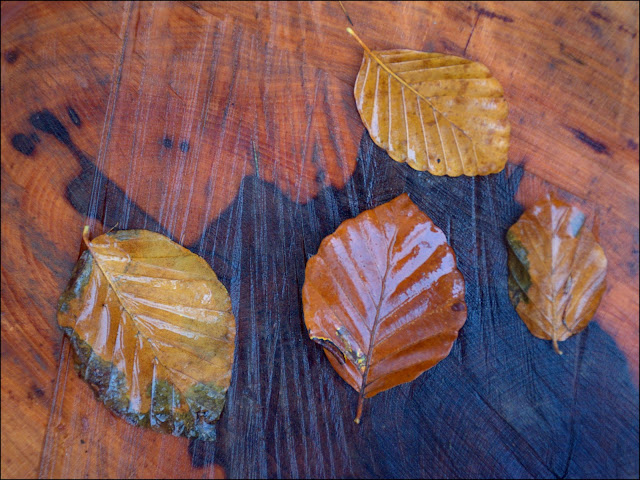 The wet, fallen leaves can also look attractive, particularly when they choose to alight on a sawn log. 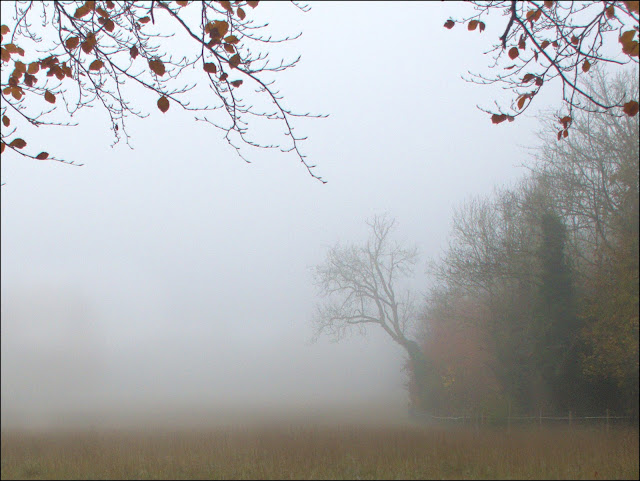 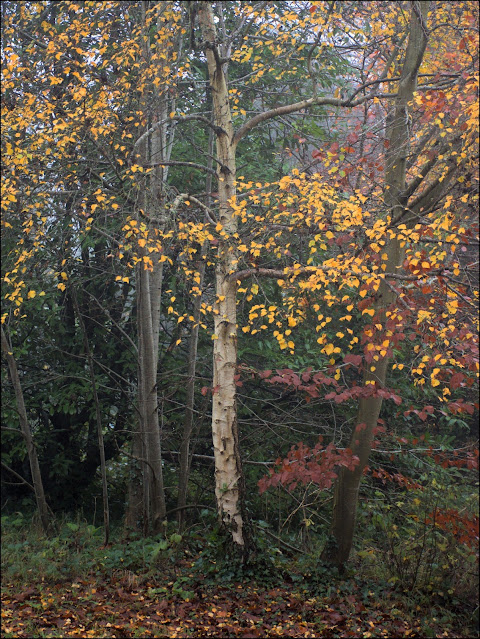 Around the house, that stands in the centre of the park, the trees and consequently the hues of the Autumn foliage have more variety. 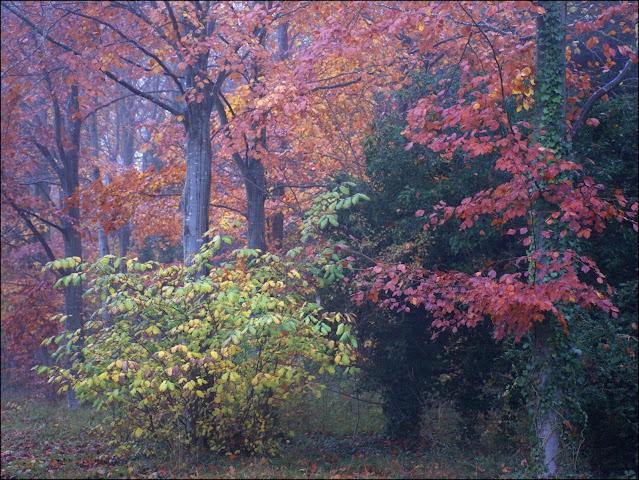 Sometimes it almost creates a rainbow of colour. 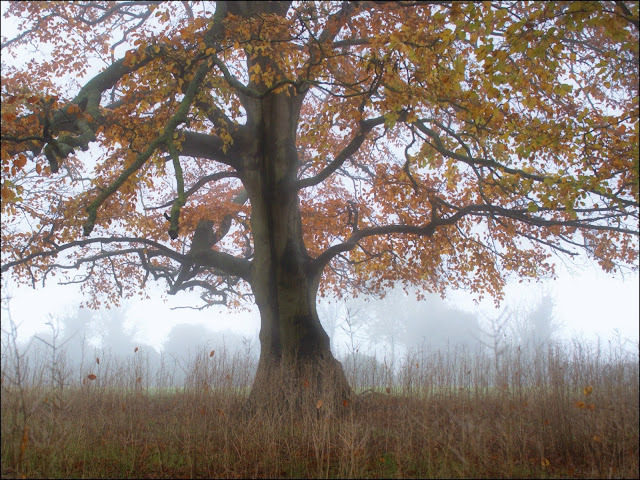 The great trees at the edge of the pasture land stand in splendid isolation, showing their bold structure. 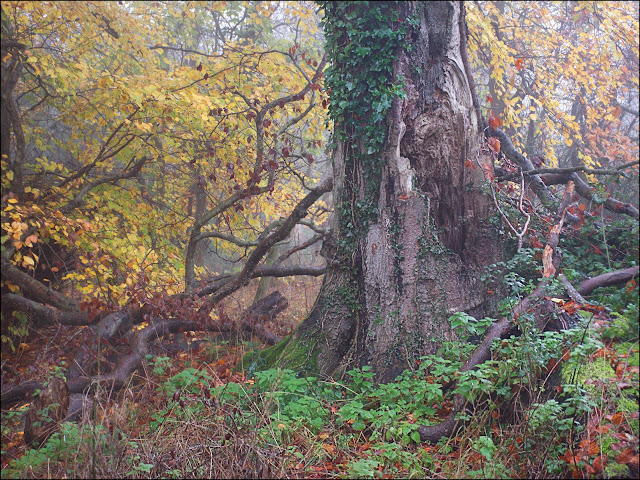 I rather fell in love with this battered stump amid the fallen branches, though I'd be hard pressed to tell you exactly why. Sometimes a little voice calls out to me to take a picture and over the years I've learned to take notice of it. We were actually searching for fungi at the time. 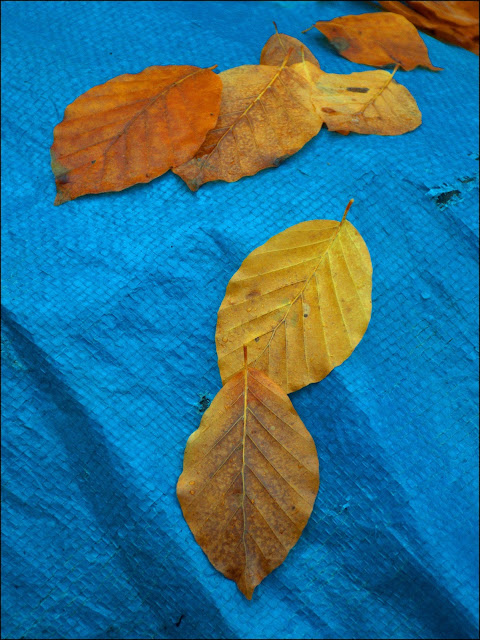 Oh dear, now he's taking shots of old bits of builders' tarpaulin! Best take him home and make him a nice cup of tea!
Take care.
Posted by John "By Stargoose And Hanglands" at 07:28