Stars Beneath The Trees

To the Medieval mind woodlands were places of mystery, though they also knew their economic worth. We're off to the woods today to see if we can find beauty, a little history and maybe even some of that mystery. 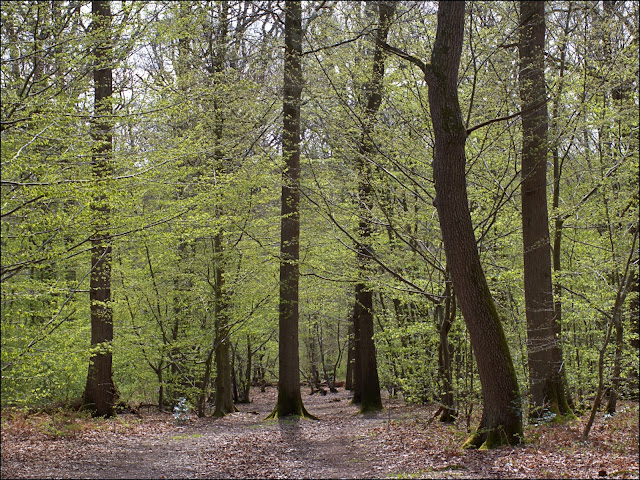 The wood I have chosen to explore on this fine day is Hoddesdon Park Wood in Hertfordshire, which is within a larger area known as Broxbourne Woods, parts of which are a National Nature Reserve. The Hornbeam trees are just coming into leaf and look spectacular as the sun shines through the delicate new leaves. 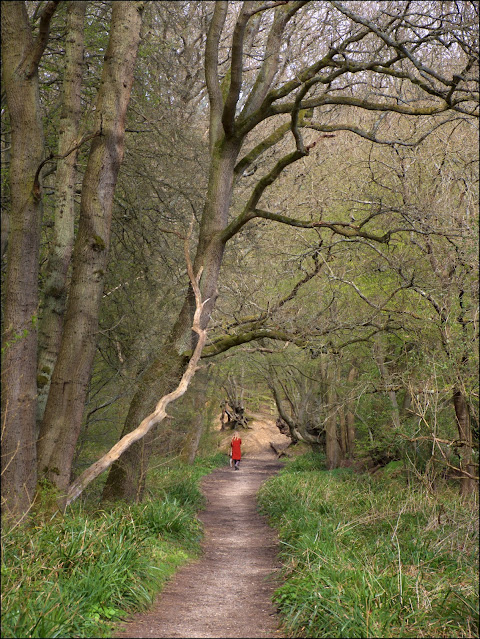 To reach the wood we need to walk down this long, straight footpath. Believe it or not this was once one of the most important roads in England, built by the Romans to link London with Lincoln and York. We don't know what the Romans called it, but it later became known as Ermine Street, taking its name from the Earningas tribe, whose land it crossed. 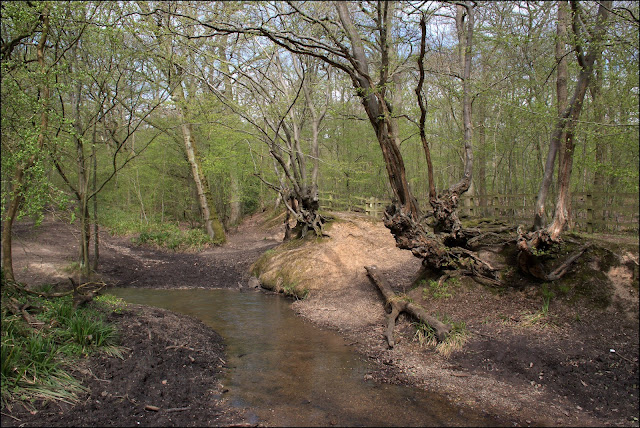 And where did the Earningas reside? Well, exactly where I do, on the boundary of Hertfordshire and Cambridgeshire. The village of Arrington, just down the road from me, was once Earningas-ton; strange how these old names have changed over the centuries. But once we've crossed this shallow ford we're in Hoddesdon Park Wood itself. 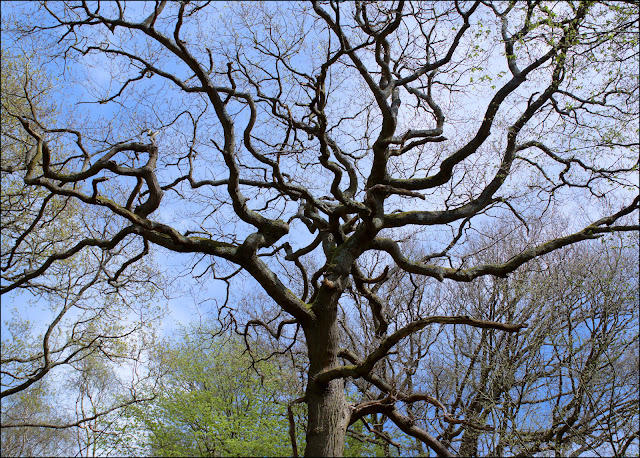 Landscape historians would classify this wood as an ASNW, or Ancient Semi-Natural Woodland. "Semi-natural" because human influence has done much to shape it for several centuries. "Ancient", in this case, means that woodland has existed in this place since before 1600 (though not the same trees, obviously). Prior to 1600 there was so much natural woodland that nobody ever planted woods, so anything in existence then had probably been like that since trees recolonised these islands after the last ice age. Pretty old then - but the title of this post said something about "stars". 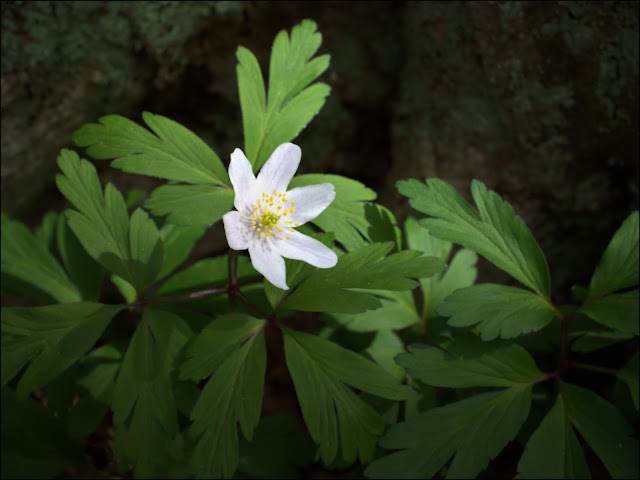 Here we are: a Wood Anemone, star of the woodland floor, blooming early before the leaves appear on the trees blocking the sunlight. They are not rare; you find small numbers in many woods around here. 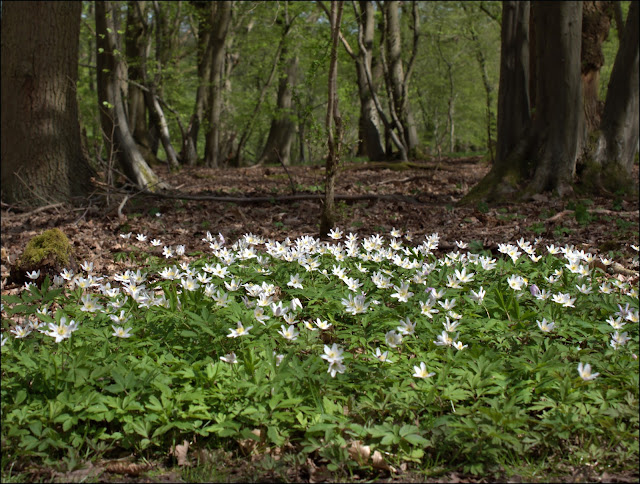 In the English climate they spread very slowly - about six feet (2 metres) every century - so if you find a lot of them then you can be sure it's an ancient woodland. 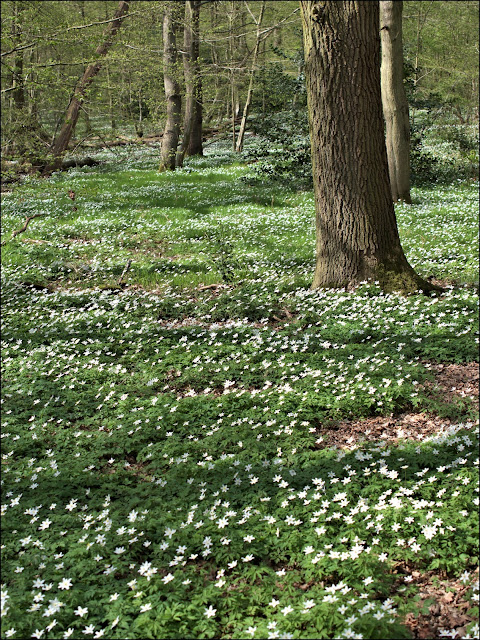 And there are certainly plenty of them here, spreading all along the eastern and southern part of the wood, where more sunshine gets in. It's a member of the buttercup family and is also known by the old name of Windflower, perhaps because it grows in the more open parts of the wood where there is more sunshine - and wind. They also vibrate prettily in the breeze, just like twinkling stars. 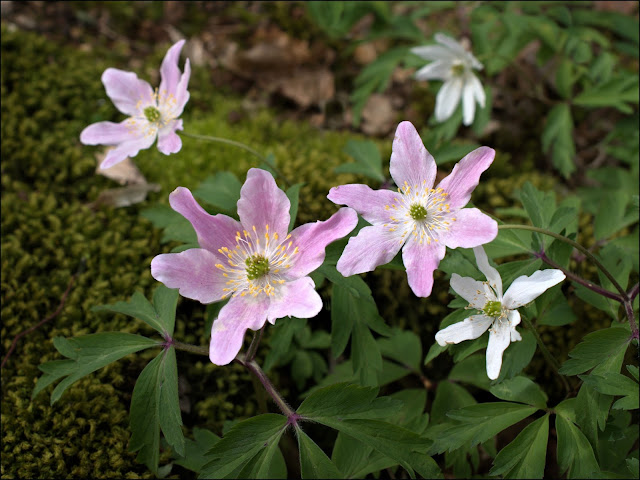 To add to the fun you can search for occasional pink flowers. These occur naturally and I'm told that some are tinged with yellow or blue, though I've never seen any. 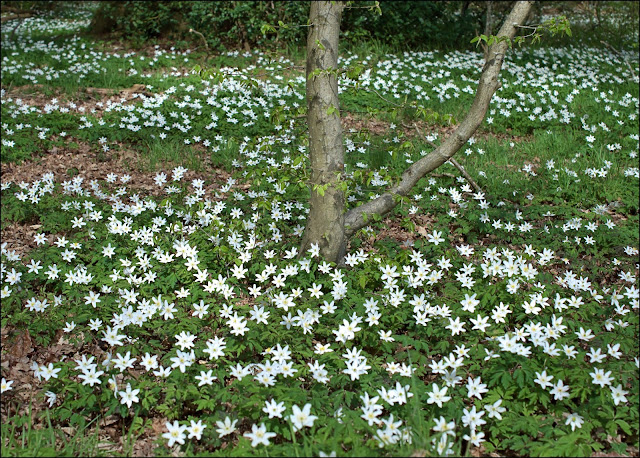 Wild flowers like these are just one of the more obvious differences between old woods and new plantations for, while it's easy enough to plant trees, it's impossible to re-create the complex mosaic of life which gives these ancient woodlands their special character and value. 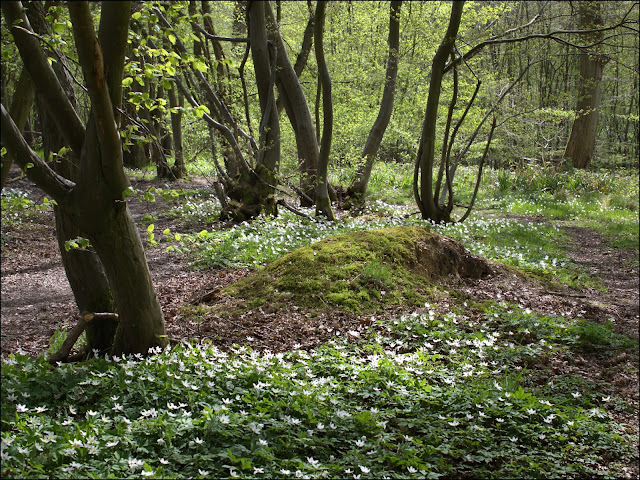 It's only very recently that scientists have begun to unravel the complicated relationships between trees and fungi. If you want to know how trees cooperate and talk to each other, you need to read The Hidden Life Of Trees by Peter Wohlleben, which is most readable explanation for the non-scientist. But there's still a good deal of mystery lurking here: the complete story of what mosses, lichens, insects and plants like Wood Anemones play in the woodland ecosystem may yet be undiscovered. 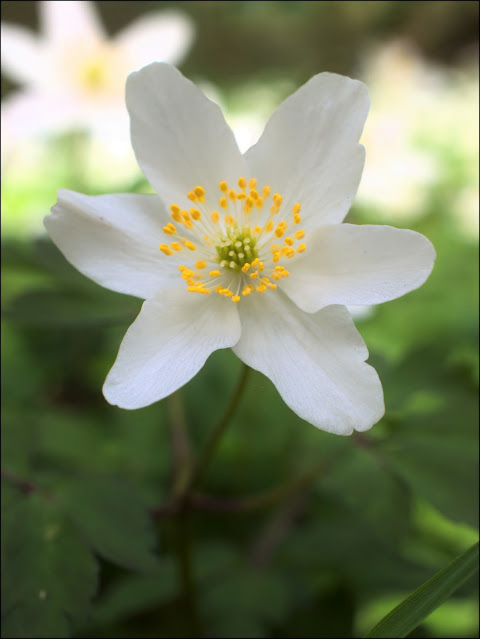 What we do know about is the history of this wood; not as much as we'd like to know, but far more than we know about many others. 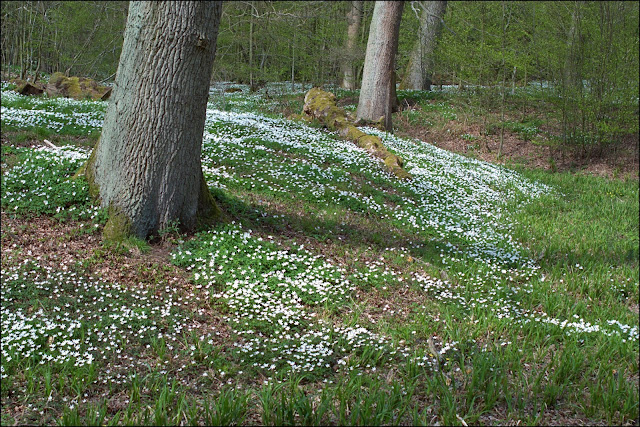 It's first mentioned in a document of 1277 when it belonged to the Brassington family, who owned much of the land around here. And the ownership of this parcel of land can be traced right through to the modern day. But far more interesting is how the wood was used in the past. 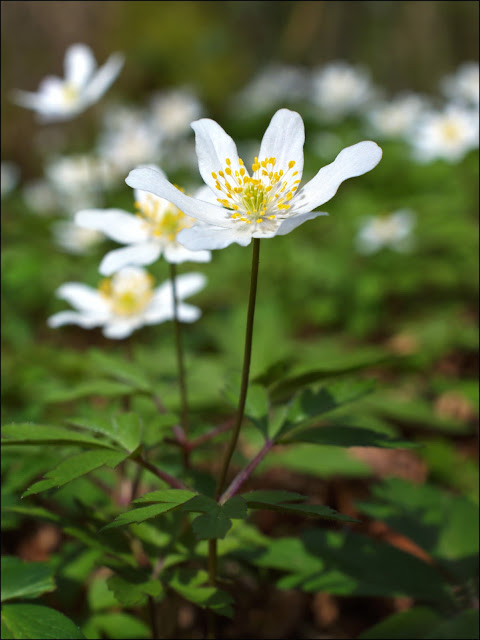 For woods were not just nice places to wander and relax, but were a resource which was exploited by the local population. And, since that exploitation went on for years and years, we can assume that it was a sustainable system which did the wood no long-term harm. 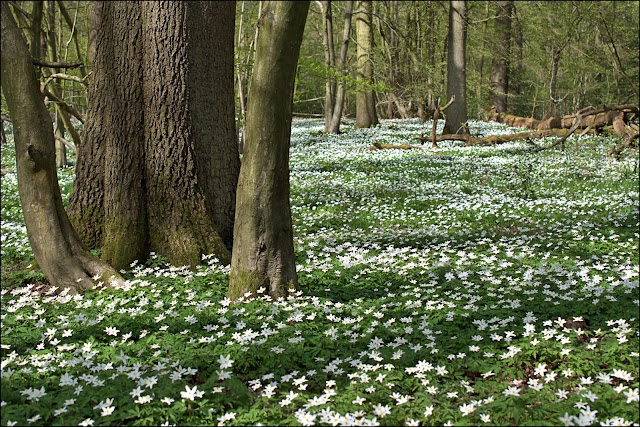 Large parts of the wood were coppiced; that is the trees were cut off near to ground level, which does not kill them but encourages them to send up many straight poles from the remaining stump. These could be used for a variety of purposes and could be harvested every ten years on a rotational system. This frequent cutting back allowed light in to the forest floor which encouraged the growth of wild flowers. That still happens today where coppicing is undertaken for conservation purposes. 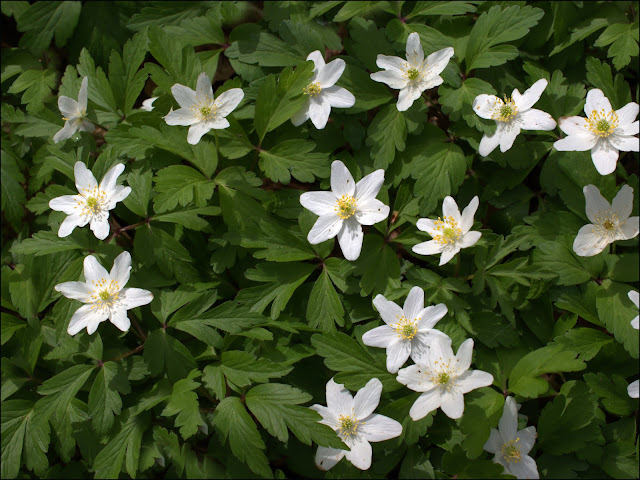 But that's not all. We also learn from the historical record that ten of "the best and fairest trees" were left on every acre of land (about 0.4 hectares) to grow into timber trees for building (and shipbuilding in some places). The bushes and fallen branches were left for the local villagers to collect as firewood. And that's by no means the end of the wood's value - nuts and berries were collected as food, leaves were fed to animals, pigs were turned into some woods to feast on the acorns, deer and wild boar were hunted, young birds of prey were taken for falconry and so on and so on. But nobody ever planted a tree; they just relied on the trees' ability to renew the woodland naturally. 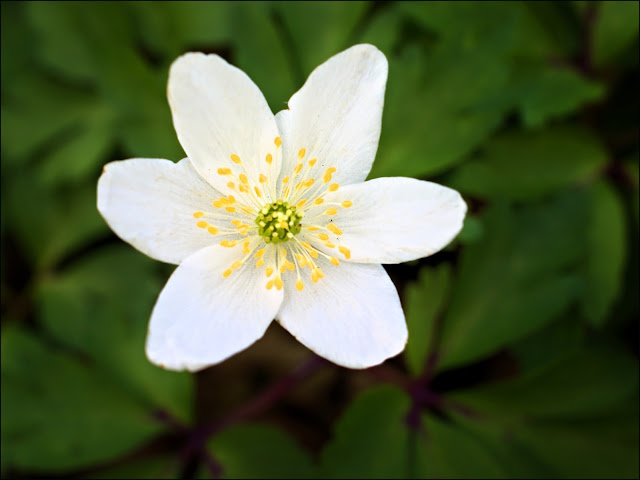 There are earthen banks within the wood which are thought to date back to the Iron Age and that system of management carried on till the nineteenth century. There's even an ancient moat within the wood which is probably the site of the head forester's house - they were important people back in their day. 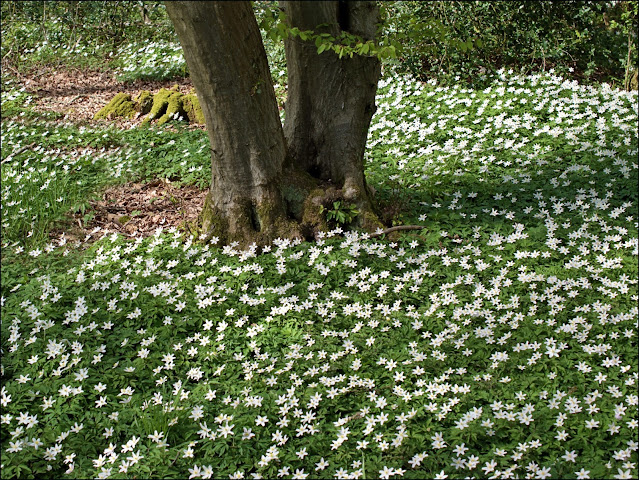 All too soon it's time to end our little ramble into the beauty and history of this fragment of the British landscape. The Wood Anemone show is one which passes most people by; if you look online you'll find plenty of information about "bluebell woods", "bluebell walks" and even a "Bluebell Railway", but these galaxies of tiny white stars are largely ignored. Mid-April is the time to go out and search for them.
Take care.
Posted by John "By Stargoose And Hanglands" at 06:58