Let me introduce you to some very small friends that I've been trying to learn about on my recent walks.... 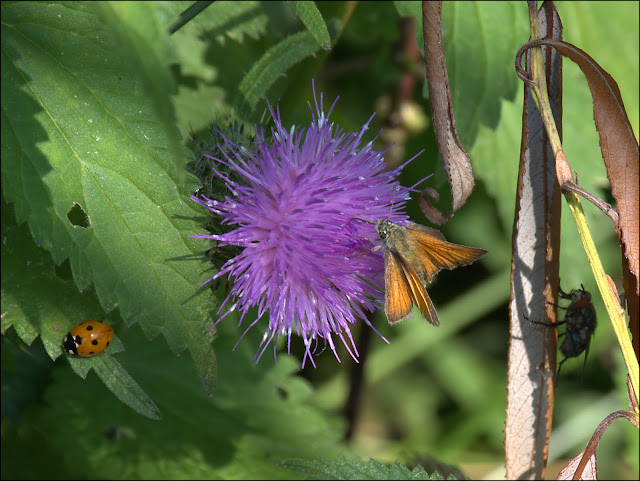 There are a lot more of these little beings around than you might realise. Here I stooped to photograph one, noticed another nearby, then found one more when I looked at the shot on the computer. Left to right: a Seven-Spot Ladybird, some sort of Skipper butterfly and an unidentified fly lurking in the shadows. 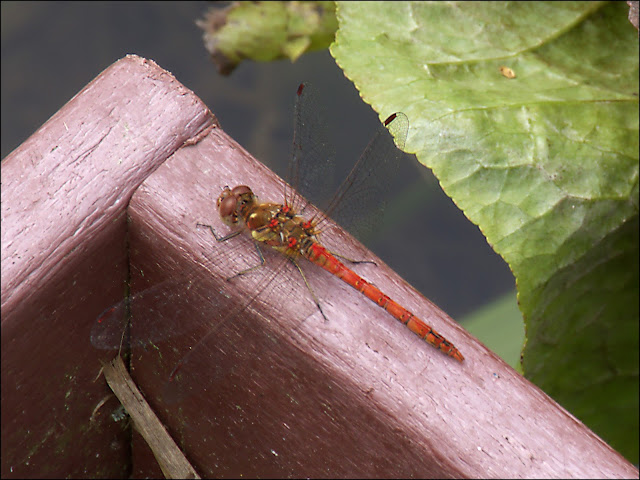 A Common Darter pauses (and poses) on a little fishing platform on a village pond. They are not at all difficult to find, though they don't always co-operate with the photographer. They are also a bit tricky in that they change colour depending on their age.... 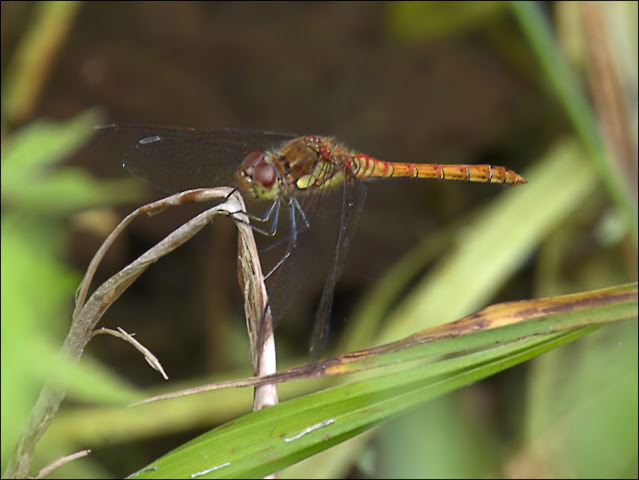 Here's a less mature male. If you look really closely you can see a yellowish stripe on the legs which confirms they are both Common Darters, though I confess I can rarely see this until I look at the photos. 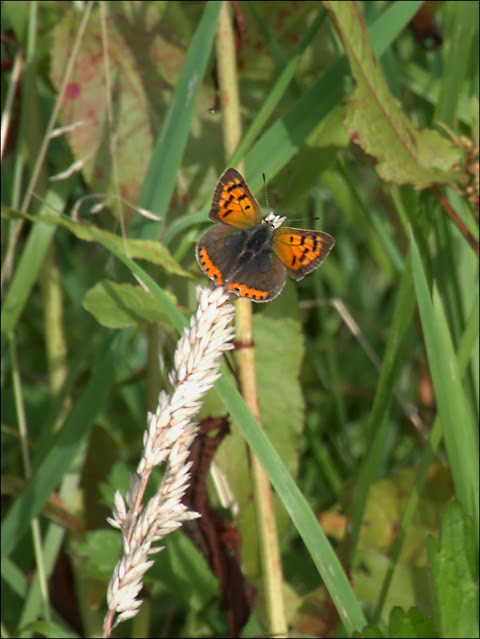 No problems with this little butterfly - at least not once it settles. It's a Small Copper, which always gets a smile in this part of the world; "copper" being the everyday word for a policeman. 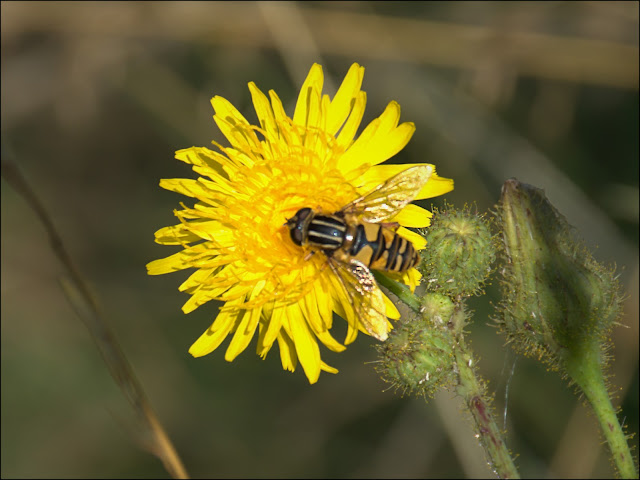 If you're a small, defenceless hoverfly it's a good idea to look like one of the hard gang, like a wasp for example. Its disguise is good enough to fool most predators (and many people). Its Sunday name is Helophilus pendulus, but its stripy thorax gives it the nickname of "the footballer". 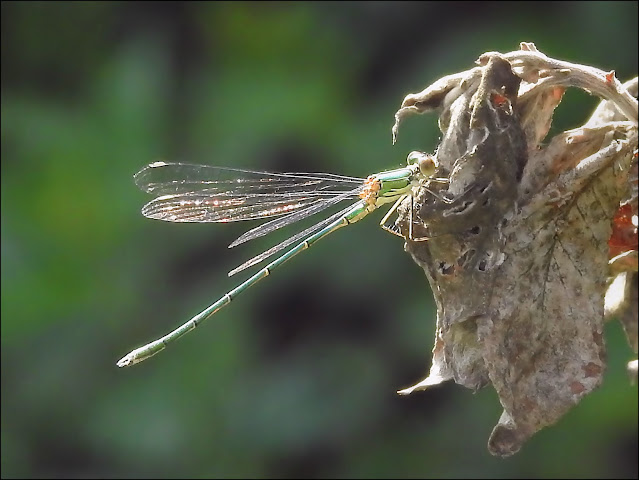 This slender (almost to the point of invisibility) damselfly is probably a Willow Emerald. If not for the sun catching its wings I'd have passed by without noticing it. 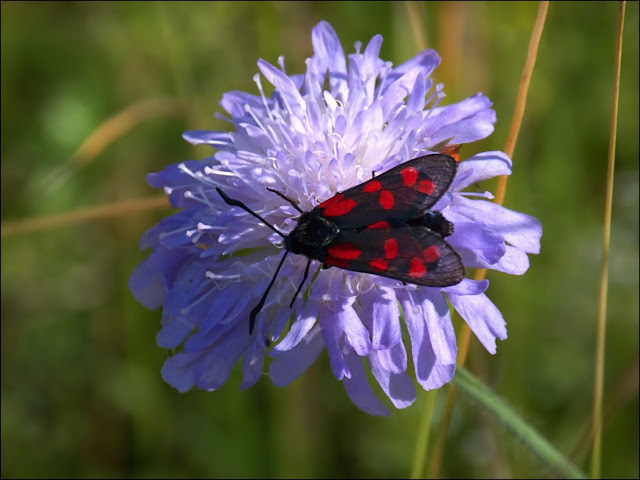 It's pretty enough to be a butterfly, but in fact it's a Five-Spot Burnet moth. 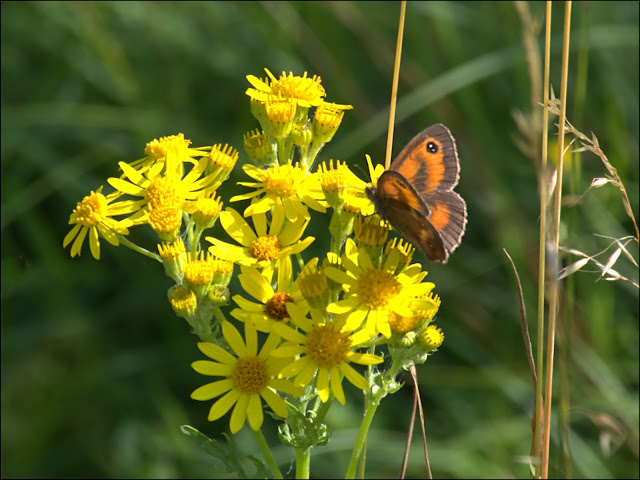 A Gatekeeper butterfly feeds on the nectar of some Ragwort. It gets its common name from its habit of hanging around near gates, though its other name of Hedge Brown suggests that you might find it anywhere along a hedgerow. Perhaps it's just that we see it as we pass through the gates. 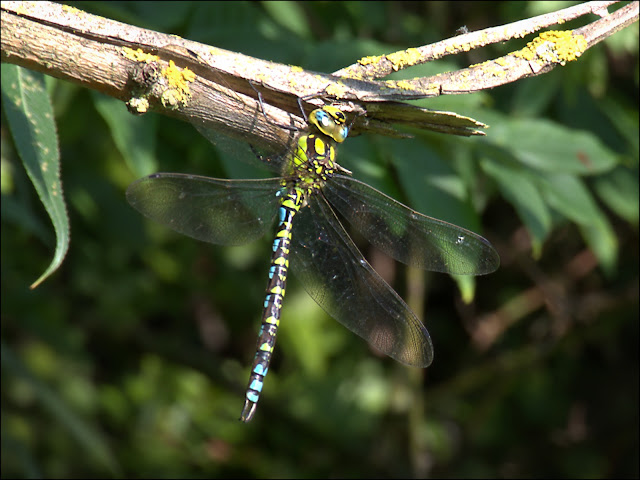 This gorgeous fellow is a male Southern Hawker, another fairly common dragonfly in the UK. Females are only slightly less jewel-like being just lime-green and black, lacking the bright blue colour. 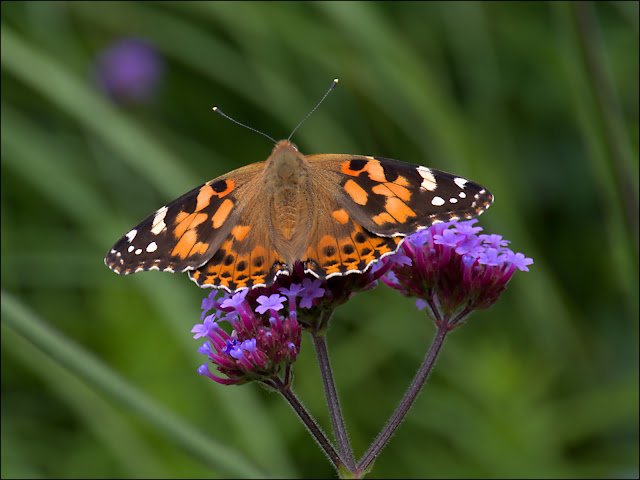 And we'll finish off with a Painted Lady butterfly. They are a migratory species that arrives here from Europe during some summers, though they seem to be getting more frequent in recent years.
Take care.
Posted by John "By Stargoose And Hanglands" at 09:16