Just last week it was considered OK for us to travel as long as we didn't go to areas with a high rate of Covid-19. Now it's all changed again and I can't even travel to my local town of Royston, which is just a couple of miles away, but over the border in Hertfordshire. So it was that one day last week my brother and I went to the North Norfolk coast for the day. 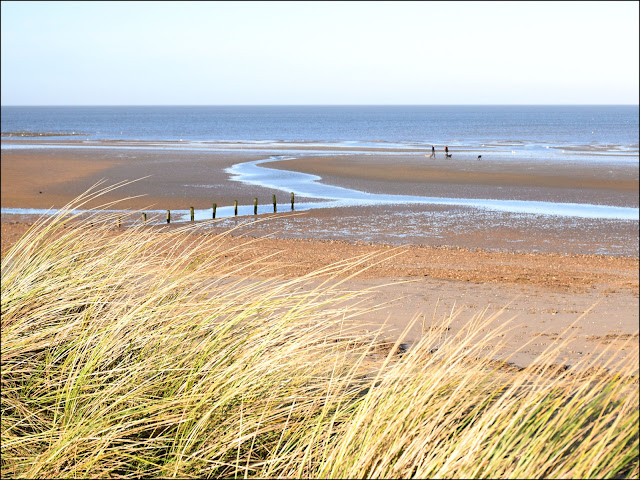 As you can see there's plenty of space up there and we planned a walk from Holme-Next-The-Sea to Thornham Harbour and back. You can walk on the beach or among the dunes and there's a wide variety of birds to keep you entertained. 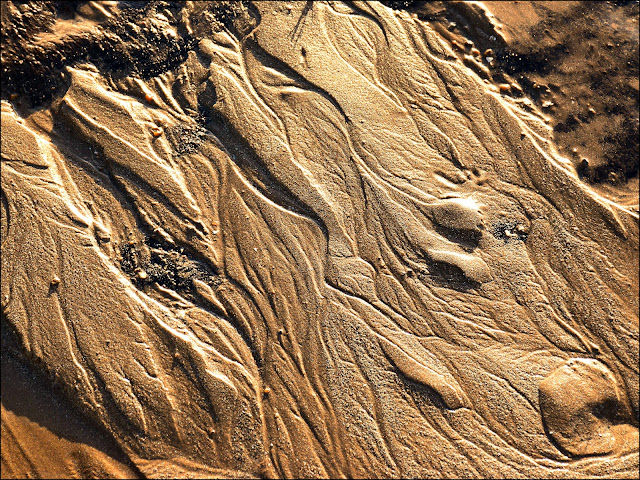 In fact I got so engrossed in searching out the various wading birds that I didn't take many photos at all, though I did get  side-tracked for a few moments by the patterns created by the outgoing tide. 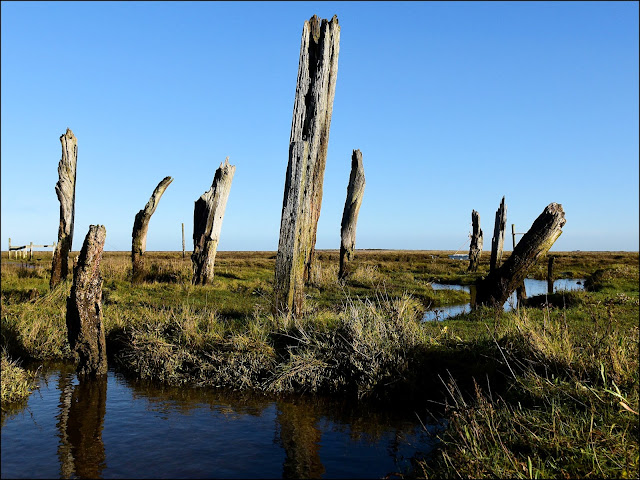 Here we are at Thornham Harbour which was once a much busier port than it is today. The old posts that stand rotting away on the saltmarsh always attract my attention. They are all that remains of some former jetties and buildings. 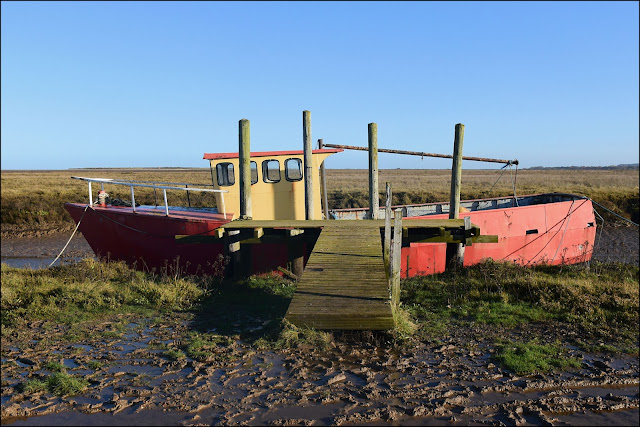 You can usually find one or two small working-boats moored up here. As you can see from the mud in the foreground this is hardly a major commercial harbour though. And speaking of mud: guess who slipped over in it? 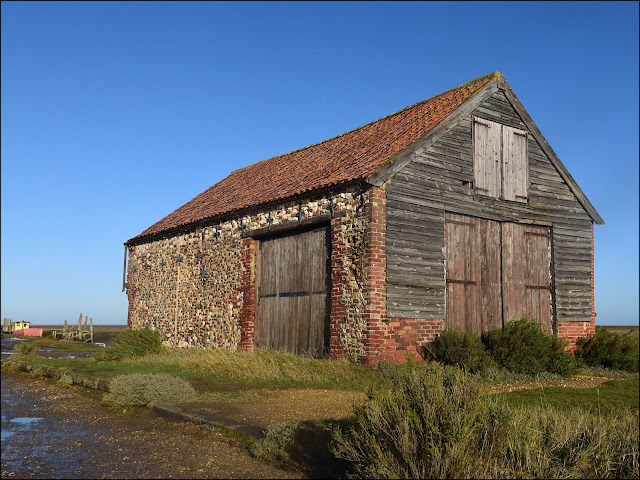 Once I'd cleaned myself up, I photographed the three-hundred-year-old coal barn. Presumably there must have been coastal trade at that time with boats sailing down from the Northumbrian coalfields. 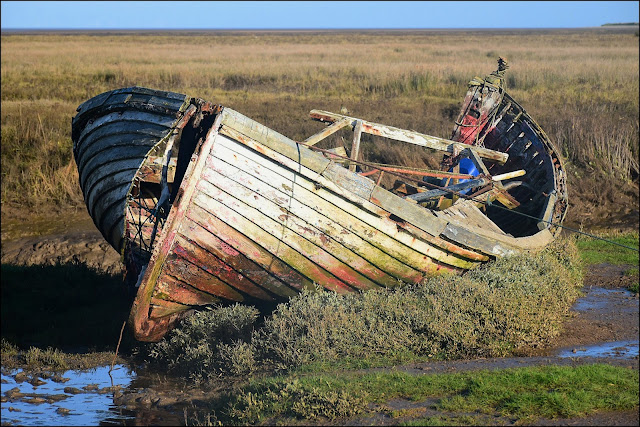 This old vessel is not sailing anywhere. There are usually a few old wrecks on the mudflats and saltmarshes around the harbour or staithe, as wharves are known up and down the east coast. 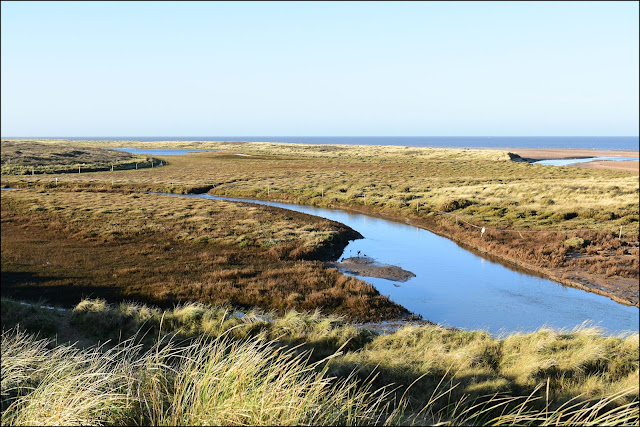 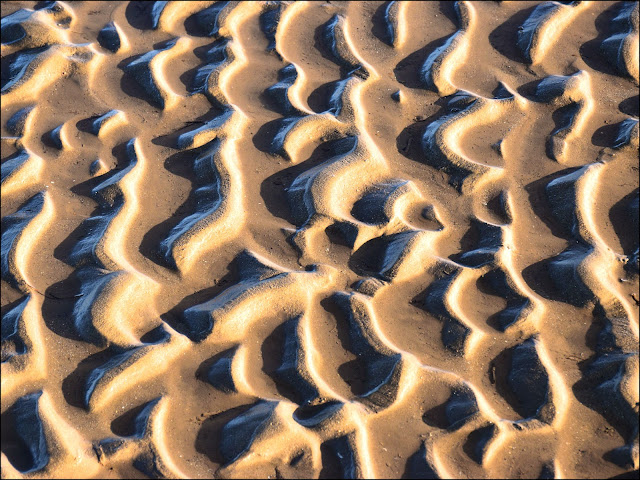 This curious abstract pattern was spotted on the beach. It's just ripples on the sand but there's something about the dark shadows caused by the low-angled sun that my eye finds confusing and sometimes it just "flips" to something else. Either you see it or you don't....
And just to add to the confusion this last picture may well be the worst photo, from a technical point-of-view, that I've ever put on this blog. On the other hand it gives me more pleasure than most others.... 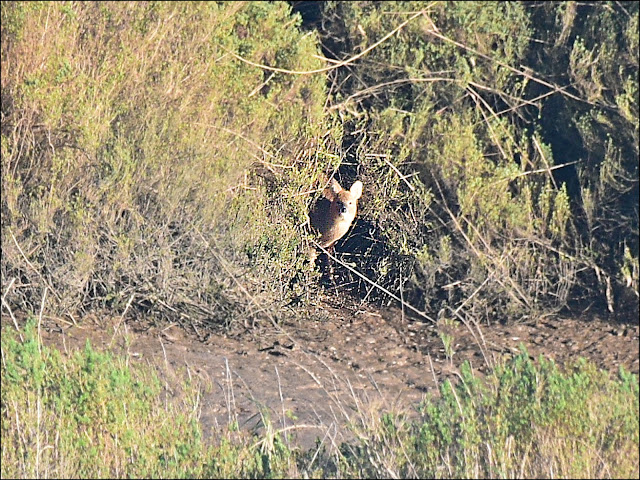 We were scanning for birds when Les suddenly said "What on earth is that beside that muddy channel?"
Neither of us could figure out if it was a bird or a lump of wood, even with binoculars. Just then it raised its head and I exclaimed "Chinese Water Deer!".
Some of these tiny deer escaped from Whipsnade Zoo many years ago and established a small wild population in an arc stretching from Bedfordshire, up through Cambridgeshire and into North Norfolk. Unlike some invasive species they cause no harm whatever to native wildlife or human economic activity. Ironically they are doing rather better here than they are in China and now represent about 10% of the world population. There are perhaps between 1,000 and 2,000 of them but they are very secretive and shy. In years of walking in the area I've never encountered one before. Les has also always wanted to see one, and there it was just staring at us from the edge of the vegetation.
Take care.

Posted by John "By Stargoose And Hanglands" at 14:22