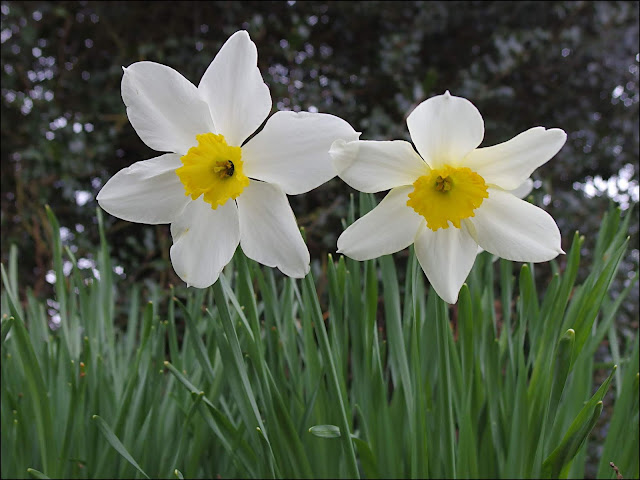 The Daffodil could easily be Britain's favourite flower. It may be the national symbol of Wales but they are everywhere at this time of year. You'll find them in parks, in churchyards, alongside country roads, outside pubs and shops, and in almost every garden. And still the supermarkets sell bunches of them at the checkout. 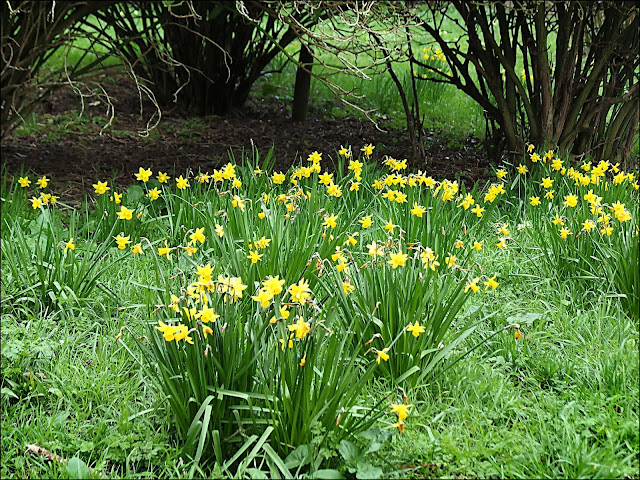 Unsurprisingly they also have a fine selection in the Botanic Garden, even if they don't seem to make too much fuss about it. 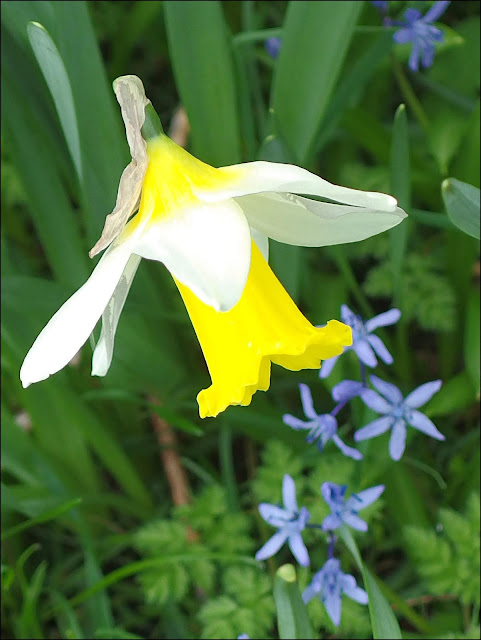 Daffodils thrive in this part of the world, which is what you'd expect as the wild variety grow naturally in western Europe. Nowadays there are dozens of forms of the humble "daff" available from garden centres, mostly yellow or white but also with some pink or greenish colouration. 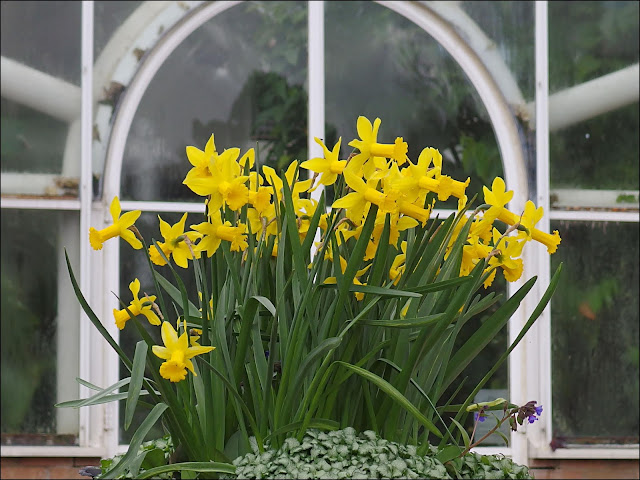 Everyone knows that William Wordsworth wrote that poem about "a crowd, a host, of golden daffodils". But his inspiration, as so often, was his sister Dorothy. Here's what she wrote in her journal:

"When we were in the woods beyond Gowbarrow park we saw a few daffodils close to the water side, we fancied that the lake had floated the seeds ashore & that the little colony had so sprung up — But as we went along there were more & yet more & at last under the boughs of the trees, we saw that there was a long belt of them along the shore, about the breadth of a country turnpike road. I never saw daffodils so beautiful they grew among the mossy stones about & about them, some rested their heads upon these stones as on a pillow for weariness & the rest tossed & reeled & danced & seemed as if they verily laughed with the wind that blew upon them over the Lake, they looked so gay ever glancing ever changing. This wind blew directly over the lake to them. There was here & there a little knot & a few stragglers a few yards higher up but they were so few as not to disturb the simplicity & unity & life of that one busy highway… — Rain came on, we were wet". 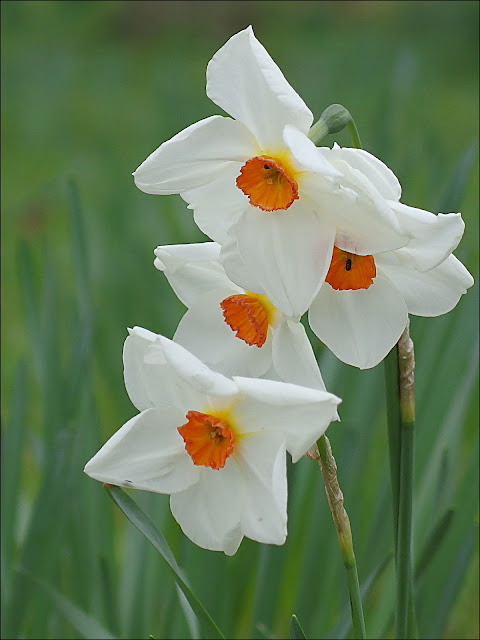 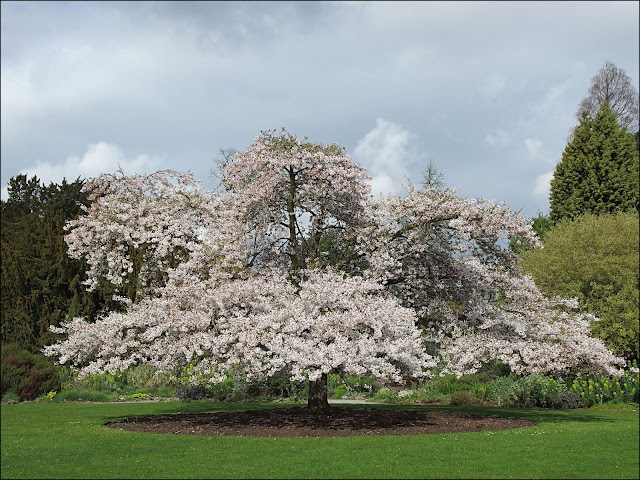 Compared to the quiet, unassuming Daffodil, this month's tree is rather the poster girl of the Garden - at least, its photo is on the notice board as you enter. The Flowering Cherry or Yoshino Cherry is actually a hybrid which occurs in Japan, though its exact parentage has long been a matter of dispute. We'll leave the botanists to worry their heads about that and we'll just enjoy its beauty. 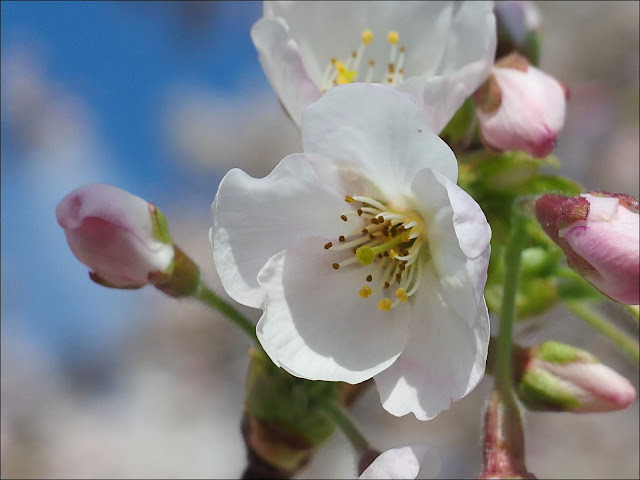 In Japan they have made a speciality of breeding dozens of different cultivars of the flowering cherry tree - enough to make everything I can find out online extremely confusing! There is general agreement though that prunus yedoensis is the most popular worldwide, growing in many cities, and amazingly enough all ultimately being clones of the same ancestor tree. 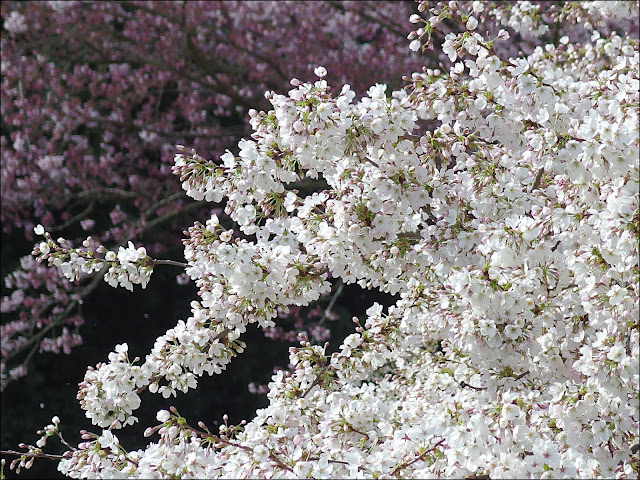 At Cambridge there is a second cherry tree with pink blossom planted alongside. 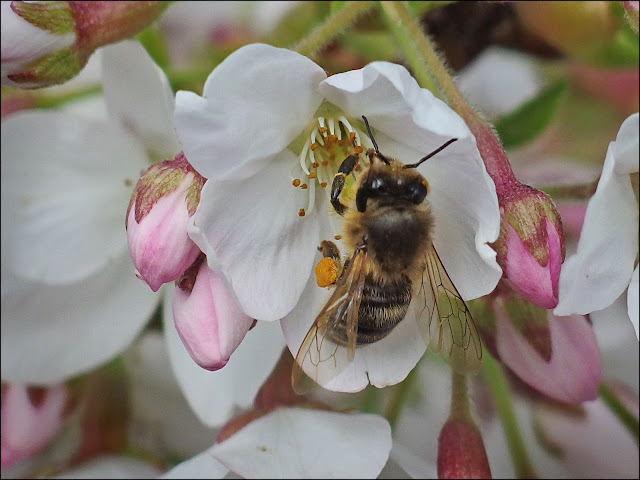 There was a low, gentle hum as a soundtrack to my photography as the industrious honeybees went about their business. Most of them were not at all keen on being photographed and quickly slipped out of focus as soon as a lens was pointed in their direction. 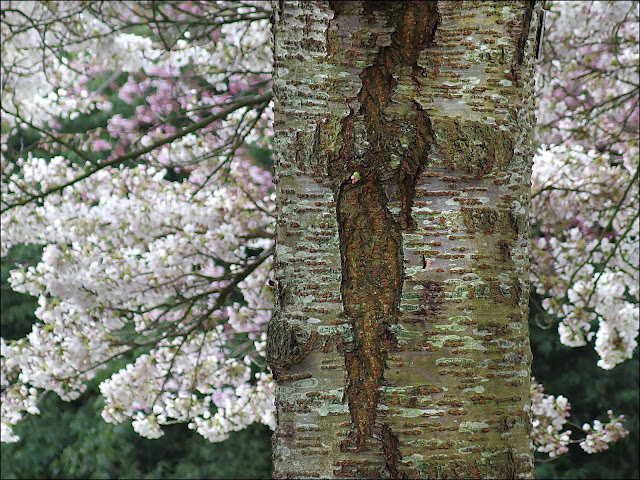 The area around the tree had recently been dug over so there's not the usual overload of photos of the bark, even though all cherries have attractive trunks and branches. 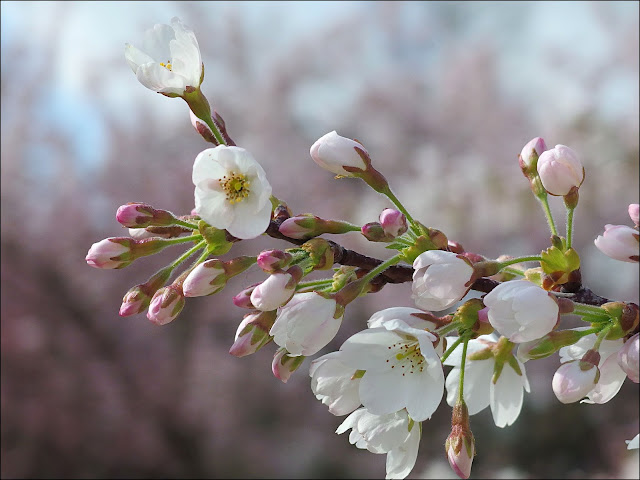 But it really doesn't matter whether you're poking your head in among the floriferous branches or viewing the tree from further away, it's still an amazing sight. 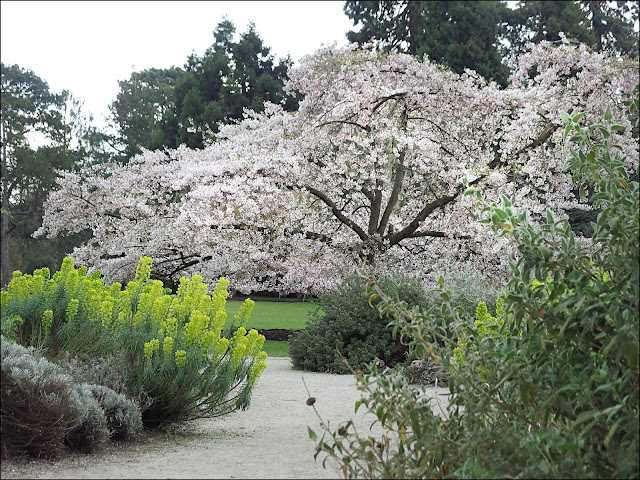