Well, you didn't think Wandering John could go to the Botanic Garden and confine his meanderings to just one small area, did you? No, after I'd photographed the Winter Garden I drifted further afield and formulated an idea: how about if I were to select just one flower and one tree that happen to catch my eye each month? Lets give it a go.... 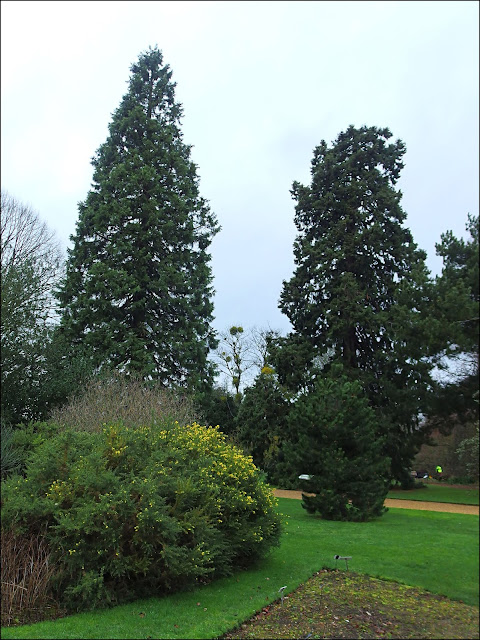 When it comes to catching the eye not much can compete with the Sierra Redwoods as they soar above everything else. These though are just babies, being only just over 160 years old and measuring only 30 metres in height. The biggest one in the world (in California) is over 80 metres high and has been on this earth for 2,500 years! 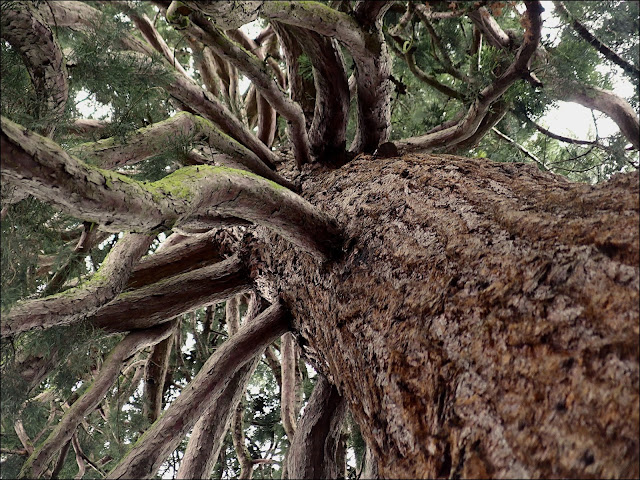 Even so these are some pretty impressive "babies"! I just had to take a photo like this, as I remember well the first time I stared up in awe at the size and strength of these giants. They must have been a little smaller then, and I was much smaller, being just four years old. 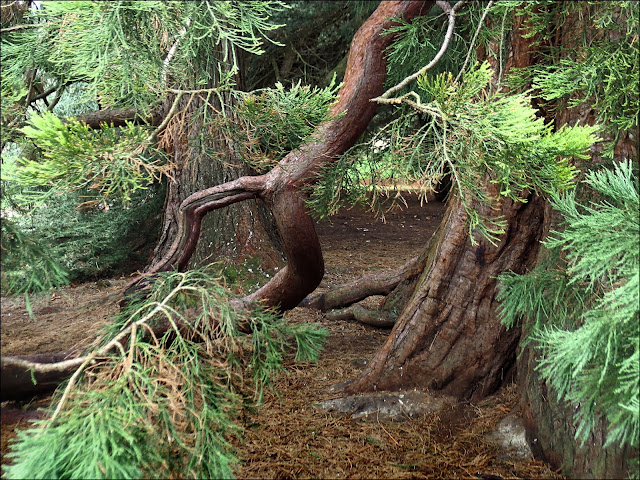 Now some six decades later I'm back once more in this safe, secret space under the tangled, downsweeping branches - and on this rainy day it's quite dry within. 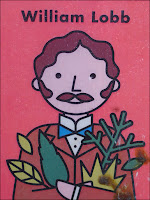 Children are still very welcome here and the University sets about inspiring the gardeners and botanists of the future by scattering bright little signs all round the garden to make a trail for junior explorers.

Here's a picture of William Lobb, who is a figure of great importance to these trees, as he was the Victorian plant-hunter who brought back the first substantial supply of Sequoia cones, from which these very trees were grown. Apparently a portion of one of these historic cones is safely stored away somewhere in the University. 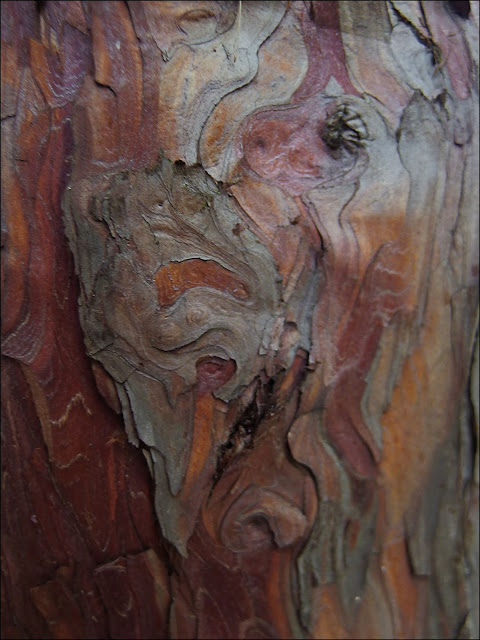 The bark of the main trunk is tough and fibrous but the branches can be exquisitely smooth and patterned, as well as being a rich and varied colour. 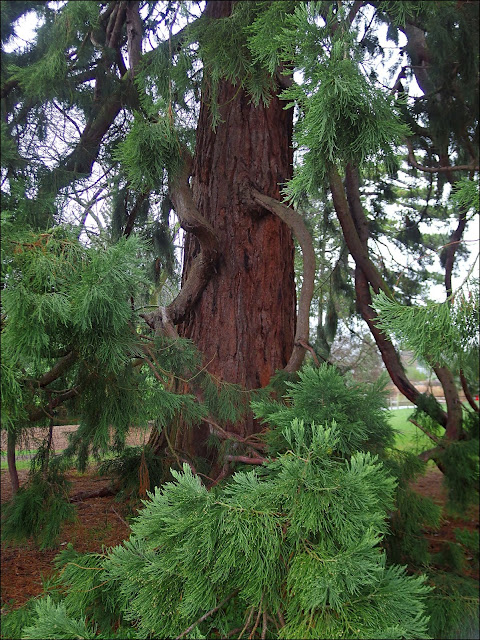 Now where can we find a stunning flower to photograph on a dull day in January? 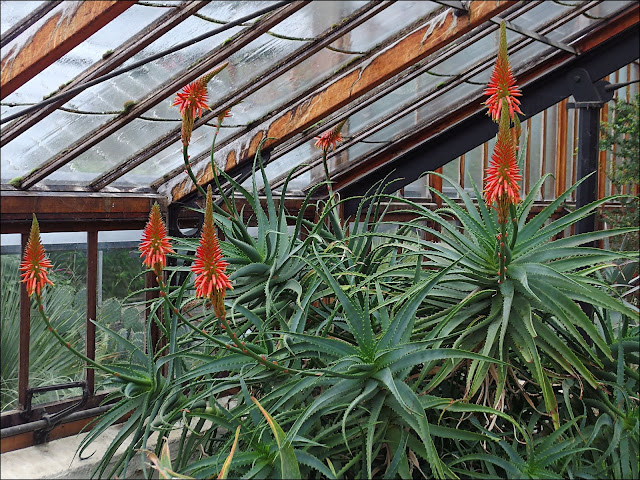 …..in the Glasshouse Range of course! In the section devoted to plants from arid lands. 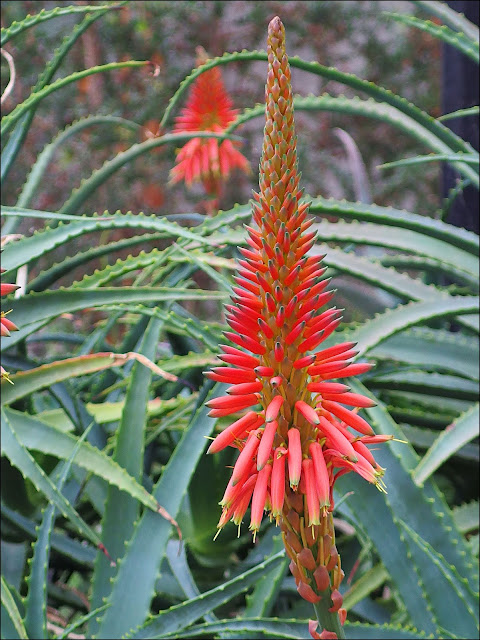 The Candelabra Aloe is native to Southern Africa where it tends to favour cliffs and rocky outcrops, but can grow anywhere from sea level to mountainsides. It used to be grown around kraals (livestock enclosures) as it soon formed a stock-proof barrier of prickly leaves, which were also unpalatable to grazing animals. Apparently the sites of old kraals can be found to this day by the large clumps of aloes that survive. 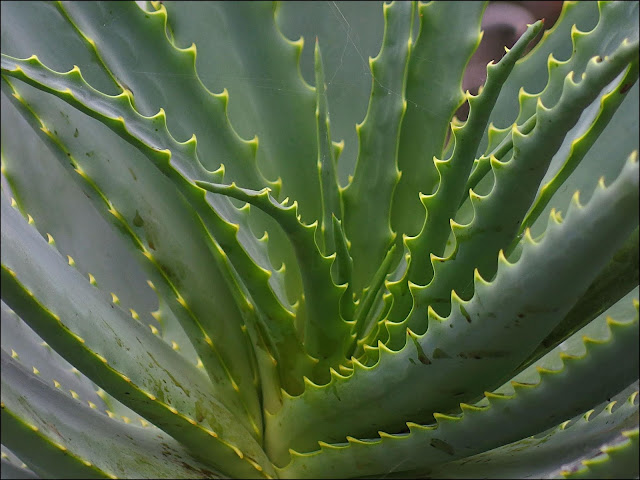 As well as bearing striking flowers it has been studied for possible medical uses, including treatment of certain cancers, hypertension, diabetes, depression and obesity. It's been used in traditional medicine for centuries. 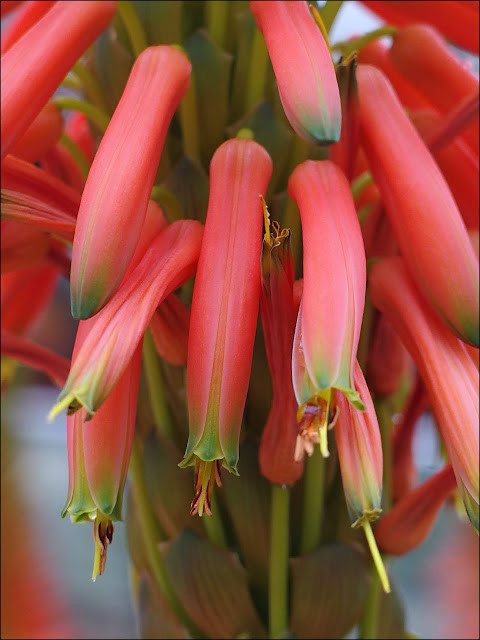 It's a pity that our climate is too cold for it to grow outdoors, so we'll just have to enjoy it here, with its flowers bent against the roof of the glasshouse. 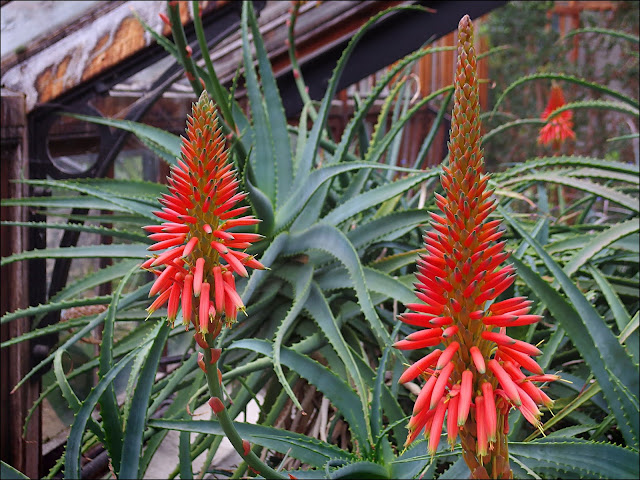 Posted by John "By Stargoose And Hanglands" at 10:44