Further To Our Earlier Enquiries

Another trawl through my photos for things I meant to share but somehow didn't. 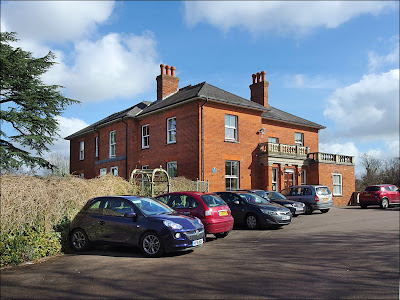 In the town of Hitchin, not far from the railway station but in a quiet residential street, stands the house in the picture above. It's called Benslow House and is now a nursing home though it once housed some very different residents. 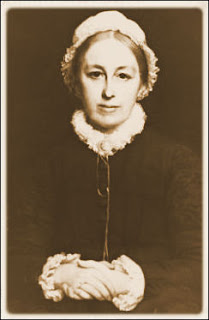 Benslow House was purchased in 1869 by a lady called Emily Davies, that's her in the picture. She was much involved in the movement to gain the vote for women, but she did not support the more violent forms of protest; she was a Suffragist rather than a Suffragette.

She had worked tirelessly to gain young girls the right to sit the secondary school exams, which were then only open to boys. Having succeeded in this aim she then wanted to give young women the right to study at Cambridge, Oxford or London Universities which were then exclusively male domains. She could not have chosen more unbending adversaries!

Being unable to get much co-operation from the universities she set up her own establishment The College for Women at Benslow House, initially with just five students. Although the universities would not admit female students there were within these institutions a small number of men who supported their cause and so the railway between Cambridge, Hitchin and London became a vital link.

Three of Emily Davies's students were able to sit Cambridge University examinations on an unofficial basis. When they passed these exams it became difficult for the authorities to maintain their position that women could not be educated to this level. Emily Davies moved her college from Hitchin to the outskirts of Cambridge and founded Girton College there, which is now part of Cambridge University. The college has a song entitled The Girton Pioneers.....

But of all the Cambridge heroes
There’s none that can compare
With Woodhead, Cook and Lumsden,
The Girton Pioneers 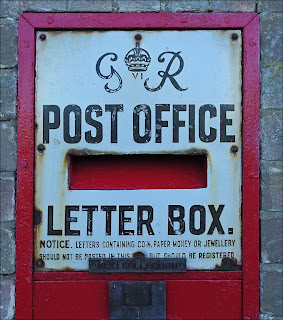 Once you start looking at the humble post box you find that there are all sorts of variations. The type shown above is the "Ludlow Box" which was designed to be a cheap alternative to the big cast-iron pillar boxes. They are cheap because they are largely made out of wood with just a metal sheet on the front, consequently they are always built into walls or brick pillars. I particularly like the dated look of the lettering which goes to the trouble of telling you not to post letters containing coins, paper money or jewellery. 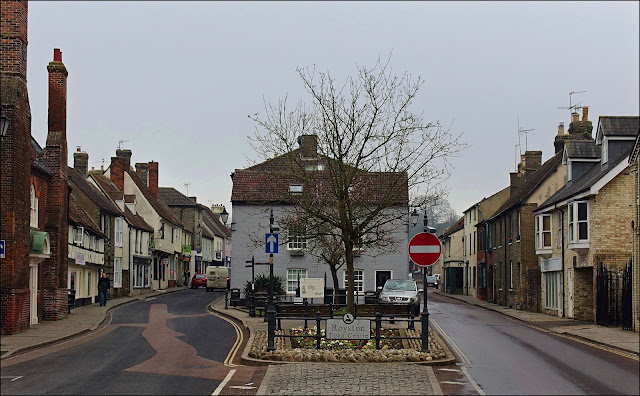 This is the main street leading through my nearest town, Royston. It is part of the old Roman Road known as Ermine Street, later called the Old North Road. As you can see from the photo it's actually two parallel streets, a form it retains right through the old part of the town. Originally there would have been market stalls on the central portion, all trying to tempt the passing traveller. In time these traders did well enough to build permanent shops. 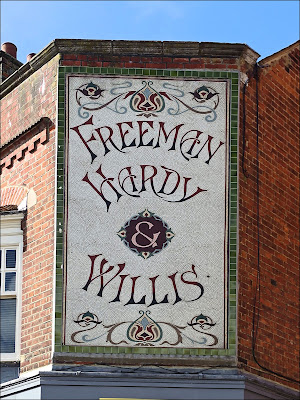 High on a wall in Hitchin is this elaborate mosaic sign for Freeman, Hardy & Willis, once one of the best known chains of shoe shops in the land.

Some years ago I fell into conversation with an old man who was a cobbler and he told me the following tale:
When shoes began to be made in factories, rather than in individual cobbler's shops, the work was split into three parts. New apprentices only were taught one part of the process. This was to prevent them, once they'd trained, from setting up their own business in competition. Unless of course three of them joined forces, and Freeman, Hardy & Willis were just such a three.

Unfortunately I'm unable to find any evidence that the tale is true and much to say it's not. Never mind it kept me entertained while I drank a pint with the old fellow! 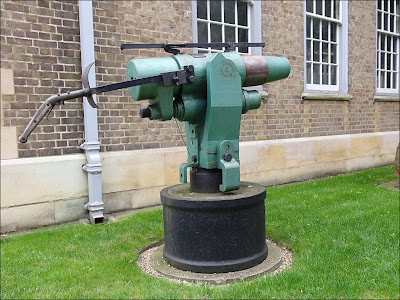 Cambridge's Lensfield Road is an unlikely place to spot the device seen above. It's a harpoon cannon from a whaling ship. It's in the grounds of the Scott Polar Museum to remind us of the uncomfortable truth that whaling was an important economic factor in the exploration of both polar regions.

Posted by John "By Stargoose And Hanglands" at 18:37