Meet some of the more civilised and courteous citizens that I've encountered on my walks in the English countryside. Like their human counterparts they're a mixed bunch, some industrious, some more relaxed; some exotic and unfamiliar, others who can trace back their ancestry through the centuries; but all with their own stories to tell. 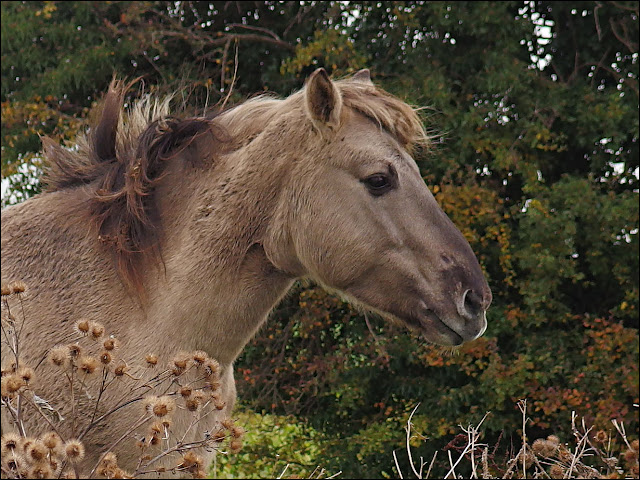 Konik Pony
These rough, tough little characters can be found at Wicken Fen Nature Reserve in Cambridgeshire. Hard-working and uncomplaining they munch the coarse vegetation and do a grand job for conservation on the fen. They're not locals though, coming originally from Poland where "konik" is the diminutive word for horse. They are a primitive-looking breed and are thought to be similar in appearance to the extinct Tarpan, the last of which died about a century ago. On cold misty days when the east wind blows across the flat landscape, tangling their long manes and tails, a more primordial scene would be hard to imagine. 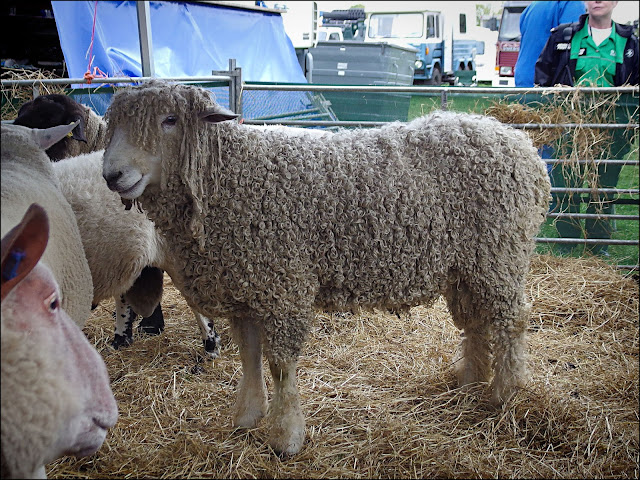 Lincolnshire Longwool
Despite the hairstyle, which reminds me of Beyonce rather than anything from the English farmland, the Longwool's ancestry can be traced back to medieval Lincolnshire. In the eighteenth and nineteenth century, when many experiments in cross-breeding of different sheep were conducted, the Longwool became a valuable animal and breeding stock were exported to New Zealand, Australia and South America. One ram was sold in 1906 for the staggering sum of 1,450 guineas. By 1960 the popularity of the Longwool had declined to such an extent that it only survived through the perseverance of just three farmers. Nowadays there are only about 1,000 breeding ewes and the breed is considered "at risk". 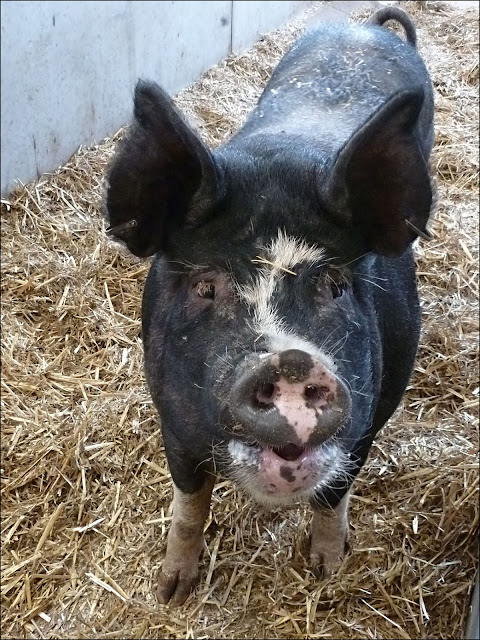 Berkshire
I like Berkshires. With their turned-up snouts, alert ears and white markings about their face they always look active and intelligent. Although they're a rare breed today they were extremely popular in the early 1900s for their firm, juicy meat. Surprisingly, for a pig breed, they are well represented in literature. The very fat sow, known as the Empress Of Blandings, features in several of P G Wodehouse's tales from Blandings; Beatrix Potter's Pig-Wig is a Berkshire sow, while Napoleon in Orwell's Animal Farm is described as a Berkshire boar. A mixed reputation then. 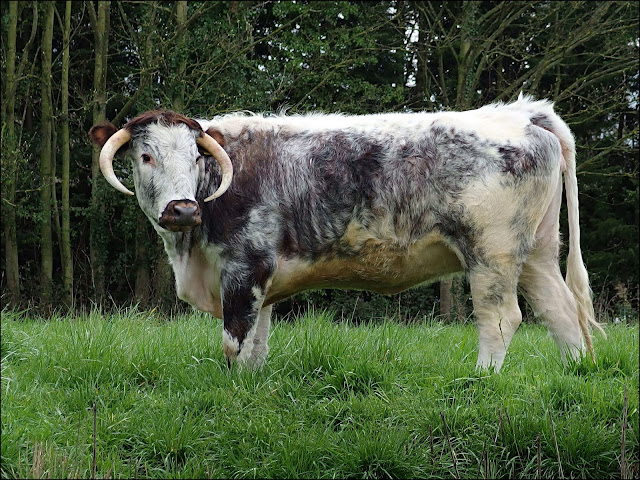 English Longhorn
English Longhorns originate from "oop north" in the Craven area of North Yorkshire where they were first of all used as draught animals, pulling carts and ploughs. As with sheep a lot of improvement of the breed took place during the industrial revolution, motivated by the need to provide food for the increasing urban population. Longhorns were found to be suitable for milk and beef as well. Unlike Texas Longhorns the horns of the English variety tend to curve around, framing the face. 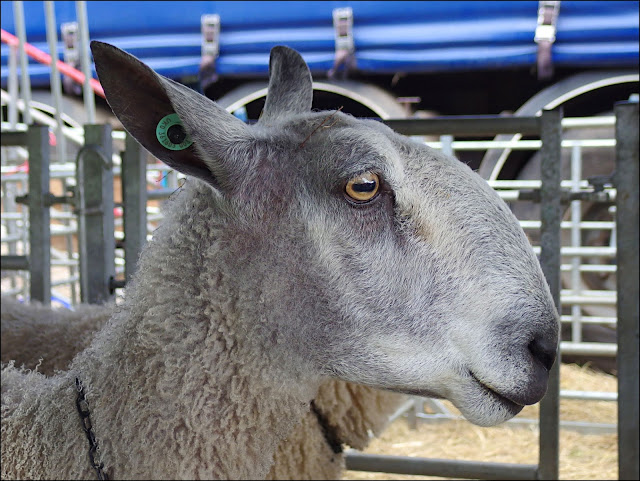 Bluefaced Leicester
Did you ever see such a noble, aristocratic profile as the Bluefaced Leicester sheep? Unlike the others we've met these are not a threatened breed, even though their numbers are not great. They were developed by the sheep-breeder Robert Bakewell in the eighteenth century and are used mainly today to crossbreed with various hill ewes to produce what are known, confusingly, as "mules". Looking after the Blueface is notoriously tricky so they tend to exist in small herds kept to produce the rams to father the "mules" which are so hardy and useful. 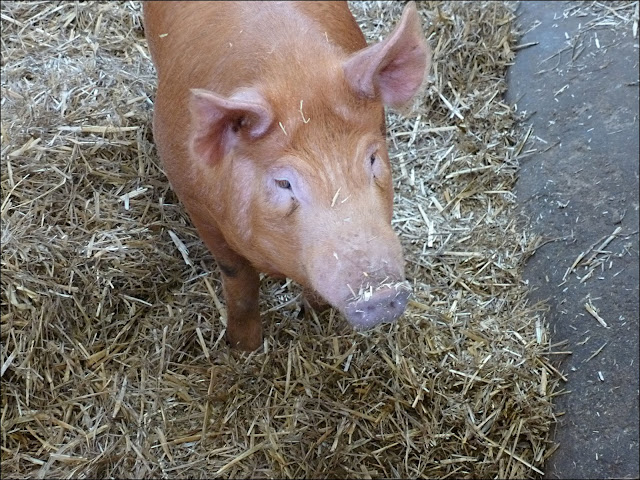 Tamworth
If you meet with a ginger pig it's almost certainly a Tamworth. They're quite a primitive breed, not at all close genetically to modern pigs but having more in common with the wild boar. As you might expect they're more hardy than most breeds but usually only have small litters of 6 or 7 young rather than the 10 to 12 you'd expect from commercial breeds. There are about 300 Tamworth breeding sows in England today. 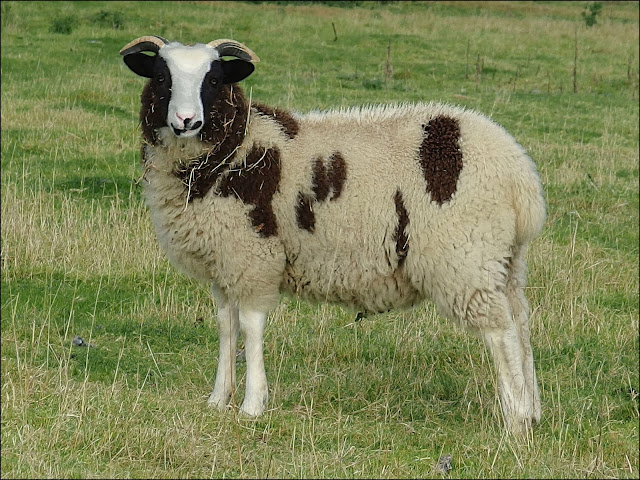 Jacob Sheep
Some people, including the Jacob Sheep Society, think this is the oldest surviving breed of farm animal in the world and believe them to be descended from the speckled and spotted sheep that Jacob selected from Laban's flock in Biblical times. From there they were imported into Spain and some folk even claim that they arrived in this country having swum ashore from wrecked ships of the Spanish Armada. (Did they really take live sheep with them?). In recent years the Jacob has been much improved by selective breeding making them a better commercial proposition so that they are no longer an endangered species. They are unusual in that they can have four or even six horns. The word for having lots of horns is "polycerate" - a useful addition to anyone's vocabulary, I'm sure.